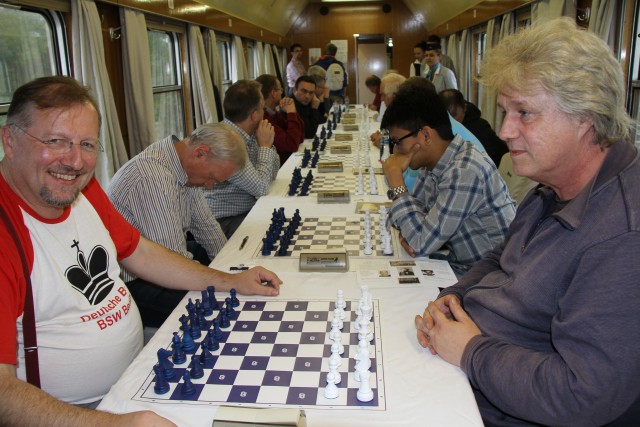 Karlsson vs Schuettig, see game below, Photo Cathy Rogers
Travelling around central Europe in a train is a preferred holiday for many, while competing in a tournament for some people is akin to work. So when Pavel Matocha combined the two to create the Chess Train in 2011, the appeal of the concept was expected to be limited. Four years later, the Chess Train has become one of the hottest tickets in the chess world, with all 180 places in the 2015 Chess Train reserved by March and 2600+ GMs turned away. The travellers in 2015 included a 90-year-old German woman, Marianne Hartlaub who scored 3.5/11, and a family with two toddlers. The Chess Train runs for five days and four nights, beginning and ending in the beautiful Czech capital Prague, with each day consisting of 1 to 3 games of chess in the morning, a serious middle-European lunch on board the train, and a new country to explore in the afternoon and evening. The 2015 edition of the Chess Train ran from Prague to Dresden to Wroclaw to Bratislava to Vienna before returning to Prague. Czech number one David Navara was presnt at Prague main station to see the train depart - he had decided at the last minute to take his own train to Berlin for the World Rapid and Blitz Championship - while another legendary Czech GM, former winner Vlastimil Hort, was present for the prizegiving, apologizing for being unable to come along for the ride in 2015, adding "but I am not finished yet!" 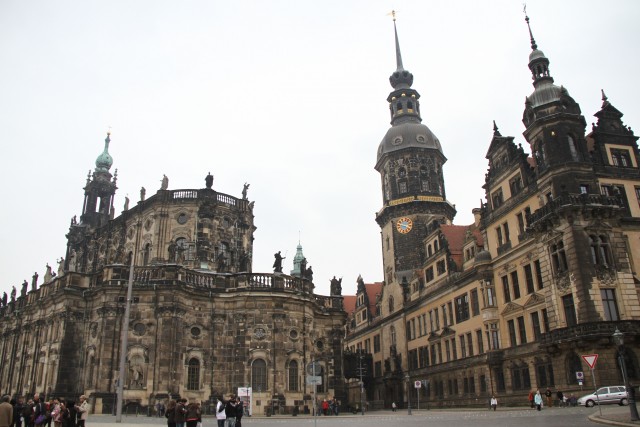 Dresden, Photo Cathy Rogers
Czech railways has thrown its support solidly behind the concept, creating a Chess Train locomotive. The 2015 train consisted of 11 carriages, each named after a World Champion, with six being playing areas, one an arbiters' room, two dining carriages, one for accompanying people plus a luggage car. Food and drinks on board, alcoholic and otherwise, are extremely cheap - 2 Euros for a dessert, little more than half that for a coffee or glass of wine. Last year Steinitz hosted the top 10 boards and Spassky carried the luggage. However this year it was feared that the new carriage on the block, Fischer, might object to hauling luggage, so the set-up was rearranged to give Tal the top boards, Fischer the motley crew who didn't want to play chess, Petrosian and Spassky served the food, while Steinitz took the extra kilos of 100+ suitcases. Of course playing on a train has its difficulties, most notably the playing conditions are hardly ideal, with the noise and movement of the train and the possibility of the sun suddenly shining in your eyes as the train rounds a bend. (The latter problem had cost Vlastimil Hort the tournament last year when, in a winning position, he lost on time while trying to get someone to shut the curtains to shield his eyes.) Players are encouraged to keep score, just in case the sudden braking of the train sends all the pieces flying, as has happened once in an early year of the Chess Train. However the generally relaxed rules on the train - no zero forfeit, no anti-draw rules and no mobile phone ban - encouraged a general atmosphere of camaraderie which solved most problems. Train travel can also be rather hit-and-miss as far as timing goes. The Chess Train sometimes meandered across the countryside on the shorter legs in order to allow everyone to finish lunch and this year track-work in Poland forced the Chess Train passengers onto a bus for the final two hours before Wroclaw which cost a lot of time. One feature of the 2015 Chess Train was the presence of an English-based documentary film crew who captured the players and scenes inside and outside the train; for example, trying to understand the concept of the Grandmaster draw, discovering the secret smokers' area created by two nicotine addicted GMs, visiting the new Prague Chess Cafe on Wenceslas Square, and witnessing the thousands of Syrian refugees at Vienna Station. Expect Chess Train - The Movie to dominate the Oscars in 2016. This year for the first time the Chess Train had a substantial American presence, most notably top seed Julio Sadorra from Texas. Sadorra scored an excellent 9.5/11 but was overshadowed by 'the other Carlsen' - GM Lars Karlsson from Sweden. In the late 1970s Karlsson, with astonishing blitz skills looked like a superstar in the making. However a near-death experience in a plane going to a tournament in the USSR caused Karlsson to foreswear air travel, going to all future tournaments by train or boat. 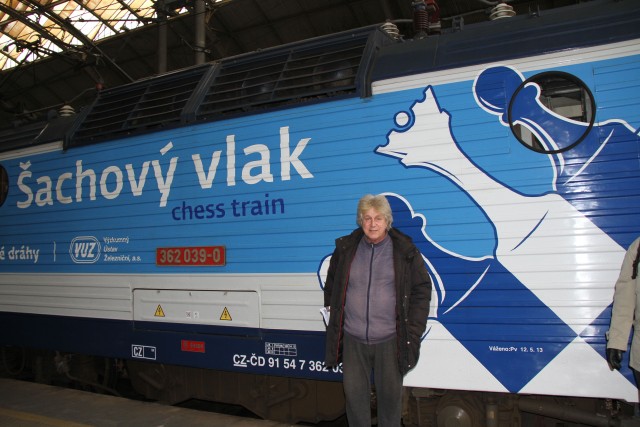 GM Lars Karlsson, Photo Cathy Rogers
His career was seriously restricted but even so he briefly became a top 30 Grandmaster. However family life, including being a parent for a total of seven children, obliged him to leave the professional circuit. In recent years Karlsson has restricted himself to competing in Sweden but he made his international return on the Chess Train tournament. Karlsson due to his flying phobia - now overcome - has probably taken more trains than any other Grandmaster, was in imperious form, drawing only two of his eleven games and beating Sadorra in the tournament's key game in the fifth round. Karlsson is a disciple of another great Scandinavian player Bent Larsen, and the Swede started every one of his games with White on the Chess Train with Larsen's opening, 1.b3. Sadorra's best game came against the Russian rapid chess specialist Oleg Maksimov, who finished fourth. The biggest surprise packet of the tournament was the performance of US chess book publisher Hanon Russell, the 32nd seed, who with two rounds to go found himself on 7/9, a point behind Karlsson and half a point behind Sadorra. However Russell had flown too close to the sun and two losses to conclude the tournament left him with only the U/2100 prize. Chess games have been organised on boat cruises, in hot air balloons and underwater, but the Chess Train remains unique as a regular touring event with normal prize money. The precise schedule for the 2016 Chess Train is not yet known but is likely to add an Austrian ski resort. The Chess Train is a rare event where just about every player goes home happy.
SHARE: