Just the Rules: You don't have the time?

There is no tick in my tock!

Through a series of unforeseen circumstances, you leave your chess equipment at home—including your clock. But only half of the tournament’s wood pushers need a timer, right? So, no worries: you just assume to use your opponent’s clock. Your opponents have provided the clock in each of your other games, and you expect the same result here.

“Pairings are up,” shouts the TD! You see that your game is booked for board 39, and you get to lead the black chess army into battle. You pick up a scoresheet and fill in your opponent’s info—the standard stuff like name, rating, etc.

You are the first to arrive at the site of the upcoming game. When your adversary appears, you both go through the usual pleasantries, and then you fess up on your lack of a proper timer, asking: “How about we use your clock?”

Which draws the unexpected reply: “No, I don’t own a clock.”

Getting a fellow chess player to loan out their clock is usually an easy task: just ask around. Most tournament chess players are good people. Finding a loaner clock typically works well in the early rounds, though the last round of the day can sometimes be a hassle. The lender may finish their game early and want their clock back, which turns into a messy situation all around. Some players avoid this hassle simply, by not being a clock loaner during the last round.

Additionally, borrowing a clock in the old days had an upside, as those analog wonders were generally easy to set and use. Today, however, digital timers are high-volume items at most events, and non-familiar models are not always easy to set. Borrowing a clock that is hard to use might work for the moment, but they might not prove worthwhile if they ever need to be reset, stopped or adjusted. And don’t expect the TDs to know how to work every model ever produced!

You and your opponent are having problems finding a usable clock or a generous donor. Time to ask the TD for some assistance.

So the Tournament Director says...

Your request to help locate a loaner clock could come with one of several different responses, and beware that all TDs and all events are different; there is nothing wrong with any of these replies:

2.    I don’t have extra clocks, so loaning them out is not an option.

3.    Yes, I have extra clocks that I can share with my players.

4.    I used to loan out clocks, but the difficulty in getting them back is not worth it.

5.    I have spare clocks. They are used only on boards without timers in the last five minutes of the final time control period. I slap a properly set one on those contests.

At scholastic tournaments, the first option is often the preferred choice for most TDs, because many of the games in lower sections finish well ahead of the scheduled round time. If a clock in a scholastic game is eventually needed near the end of the round, then the TD typically opts for choice number-five.

We don’t need a clock!

So you start your game without a clock and hope for the best. You normally play fast, and the clock has never been an issue in any of your previous games – though you are not sure about your opponent, who appears to be moving slower than a river of molasses.

Hooray! The TD found a loaner clock, and only 30 minutes have passed since the round started. The TD explains that the device is properly set for the event’s time control, and both players will have 15 minutes deducted from the base time control, which splits the elapsed round time equally between the two of you.

You protest! “I moved faster than my opponent and should get less time deducted from my clock!” But the TD has no way to prove how much time either player took to make the moves, so the correct play here is to split the elapsed time equally between both players.

And don't forget the final, most-important instruction from the TD: “Return that clock directly to me at the end of your game. I need to return it to its owner!”

Don’t go to a tournament without your chess clock!

And please know how to set and use it! They come with instructions – but that is another topic altogether. 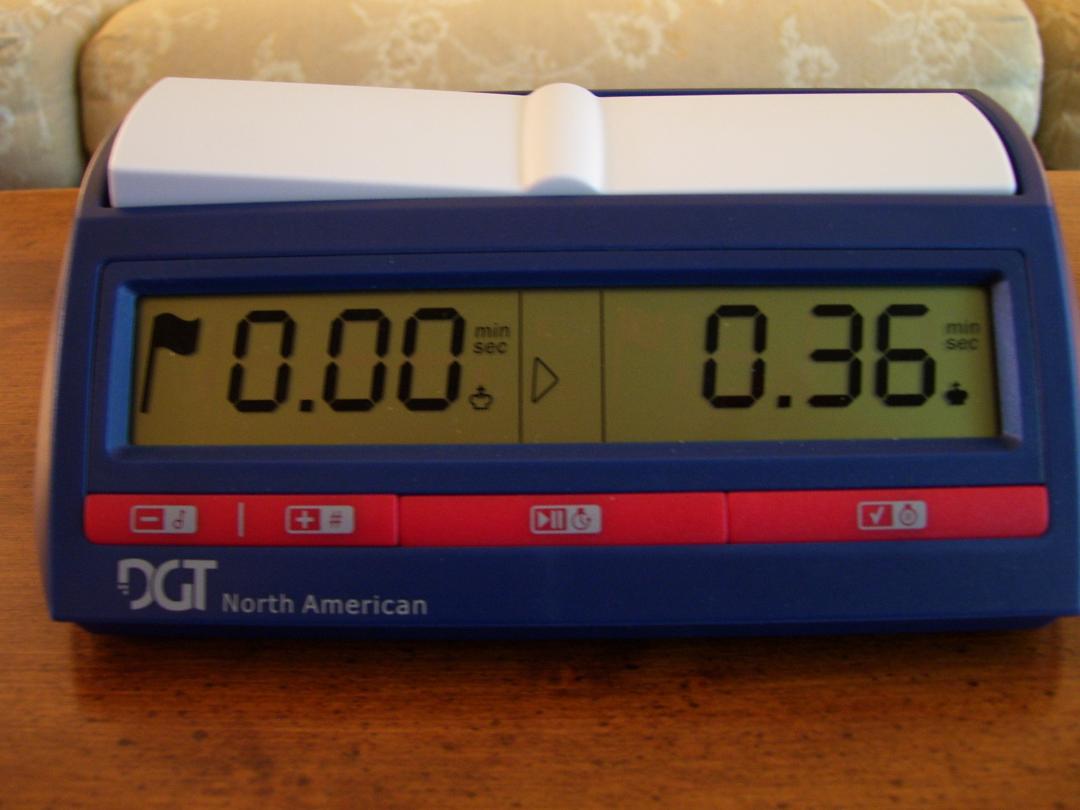 The free, updated US Chess Rules (Chapters 1+2 + 10 +11 from the 7th edition rulebook) are now downloadable and available online. Past “Just the Rules” columns can be viewed here. Plus listen to Tim when he was a guest on the US Chess podcast “One Move at a Time.”