Just The Rules: It's Q&A Time 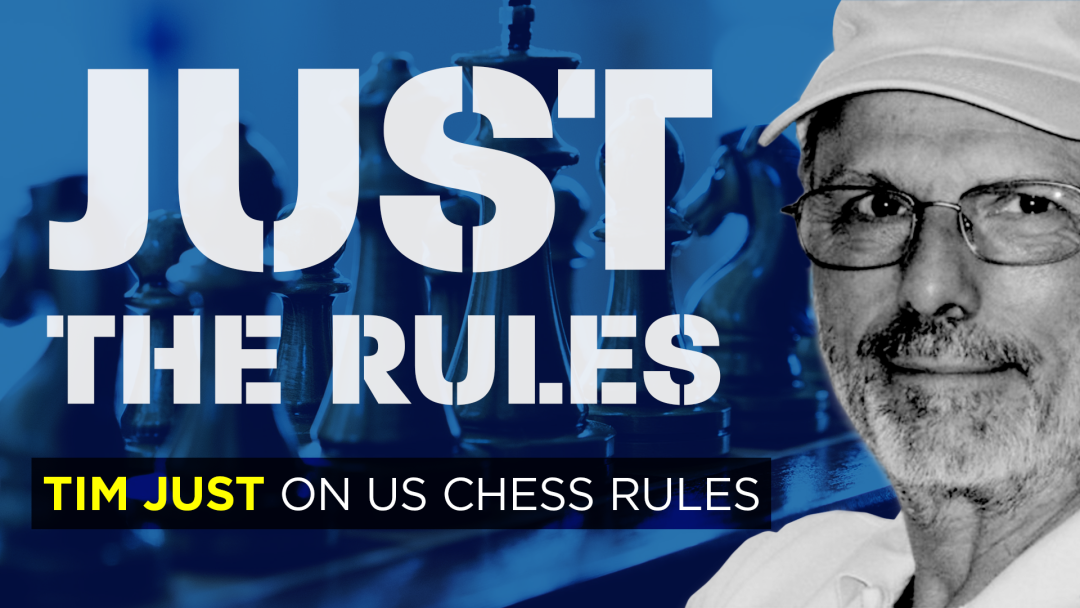 This month, Tim takes questions from readers on a variety of topics ranging from claiming wins on times, how to claim a draw by repetition, and when the clock 'really' starts. - Ed.

Claiming a Win on Time

Q: I had to make 15 moves in two minutes to meet the 40 moves in an hour (40/60 or 40/1) first time control in my game. Each time I, or my opponent, made a move, I inserted a check mark on my scoresheet. My opponent had three minutes left on their clock and also filled in their scoresheet, move by move, with check marks. They ran out of time. Their flag fell on move 39. I claimed a time forfeit win. The TD denied my claim and instructed us to play on into the next time control. Why?

A: To make a successful time forfeit claim in that kind of time control, you need an accurate scoresheet. A scoresheet with no more than three missing or inaccurate move pairs is required. Check marks count for nothing when making a draw claim. By the way, you also need to have mating material to make a time forfeit claim, or else the game is a draw.

Q: Do I need a complete and accurate score to make a time forfeit claim in a Sudden Death time control?

A: All you need to do in a Sudden Death time control is demonstrate that your opponent’s time ran out. Typically, their clock will note they ran out of time, you simply need to point this out. Yes, you still need mating material to make that claim.

Claiming a Draw by Repetition

Q: I claimed a draw by perpetual check. The TD denied my claim. Why?

A: Because there is no “perpetual check” rule. There is a rule that says if the same exact position is reached three times — not necessarily one move after another — during the game, a claim of a draw can be made. Imagine a camera that could take a picture of the board position after each move. When the exact same image appears 3 times — like on moves 23, 27 and 31 — then the game is a draw if the claim is made properly (see rule 14C). By the way, a draw claim — even a bogus one — is the same as a draw offer.

Q: I was going over my game after it had finished. I lost. I noticed while analyzing that the same position appeared three times. Neither of us signed the other’s scoresheet. I notified the TD that the game should have been scored as a draw, due to the same position appearing three times. The TD did not change the reported game result — a loss for me — to a draw. Why?

A: You need to make claims while the game is in progress, not after the fact. A lot of evidence can get lost, or altered, after a game is over. Your score showed those three identical positions. Your opponent’s score may not. Neither score was signed. A signed score helps verify that the scoresheet was an original. Are there any witnesses? After the game there is not even a board position for the TD to look at. Making claims after the end of the game is iffy at best. About the only concern a TD may take more note of is one involving cheating.

Q: My opponent was late to our game. I am a good sport so I waited until they arrived before I started their clock. While walking around the playing room a TD spotted that my timer had not started ticking down for either player. I explained why. The TD said I could not do that. That seems unfair.

A: I applaud your sportsmanship. Your kindness to your opponent was not the issue. If the two of you start your contest very late, it could hold up the end of the round — and possibly the start of the next round — for everyone else.

Q: I left home without my set, board, or clock. The organizer did not provide any equipment. At the start of round two I went over to my assigned place. My opponent was not there. He showed up with his equipment twenty minutes after the start of the round. He set our clocks so that each of us got docked ten minutes of playing time. I pointed out that I should be allotted my full playing time — I was there at the start of the game. He should be docked the full amount of his tardiness — twenty minutes. The TD agreed with my opponent.

A: Equipment must be set up before the clock can be started. In this instance both players had to split the time that the equipment was missing. You had no equipment. Your opponent was not there. Neither you nor your counterpart had a chance to make even one move. The opportunity to move and press a clock might prove to be very important if a player arrives near the “late for a game” forfeit time. With no equipment that opportunity is lost. By the way, if you had both been on time without a set, board, or clock, then the time it takes both of you to find, and set up, equipment for your contest is equally deducted from both of your playing times.

Tim Just is a National Tournament Director, FIDE National Arbiter, and editor of the 5th, 6th, and 7th editions of the US Chess Rulebook. He is also the author of My Opponent is Eating a Doughnut & Just Law, which are both available from US Chess Sales and Amazon/Kindle. Additionally, Tim revised The Guide To Scholastic Chess, a guide created to help teachers and scholastic organizers who wish to begin, improve, or strengthen their school chess program. US Chess awarded the 2022 Tournament Director Lifetime Achievement Award to Tim. He is also a member of the US Chess Rules Committee plus the Tournament Director Certification Committee (TDCC). His new column, exclusive to US Chess, “Just the Rules” will help clarify potentially confusing regulations.

Besides keeping the tournament running on time there is another reason a TD will start the clock even when somebody wants to be nice and delay starting it for an absent player (or when applying other various penalties to players even when the opponents request they not be applied).  That prevents players from using peer pressure to get their opponents to waive such penalties (occasionally bordering on non-physical bullying).  Such peer pressure attempts seem significantly more common in scholastic tournaments.  A TD remaining calm and matter-of-fact (when refusing to waive penalties) keeps the focus on the penalty and make it more likely to keep emotions out of the players' reactions.

Although all draw claims ARE…

Although all draw claims ARE draw offers, it isn't quite right to say that "a draw claim is THE SAME as a draw offer." The two are not identical, since the former involves the additional notion (claim) that the game is drawn INDEPENDENTLY of whether the opponent agrees or not.

True, but I have been able…

True, but I have been able to resolve many draw claims simply by stating to the opponent that their opponent would like a draw and many times the opponent simply agreed to the draw without me having to validate the original draw claim.