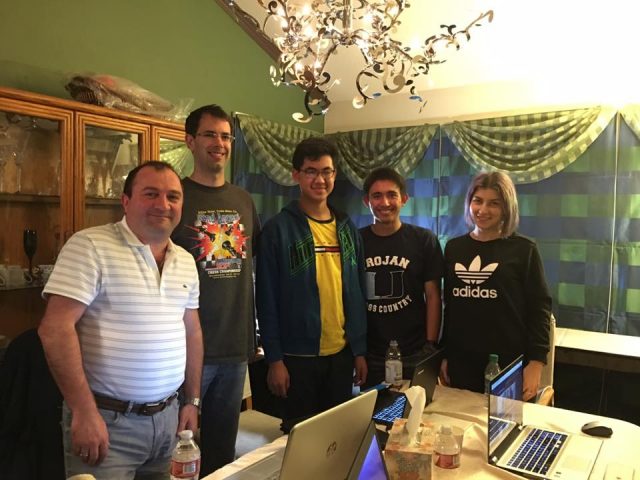 The PRO Chess League's San Diego Surfers (left to right): Melik Khachiyan, Keaton Kiewra, Joshua Sheng, Craig Hilby, and Tatev Abrahamyan. Photo courtesy of Keaton Kiewra
The Los Angeles Open was held on November 3-5 in the LA suburb of Van Nuys.  Four IMs, two FMs, two WGMs, and one WIM were the titled players in the 43 player open section. After four rounds, IMs Keaton Kiewra and Joshua Sheng were the only players at 4-0.  They played a quick last round draw to secure first place.  Each won $1100 with Kiewra earning an additional $100 for the better tiebreaks. The first round went pretty much according to plan for the top players.  The majority of the top players won their games.  There were a few upsets and the most notable one was FM Danial Asaria losing to Gabriel Eidelman.  Asaria grabbed a poison pawn, and Eidelman is able to sac a piece and go on a king hunt. Asaria though would rebound winning the next four games and tying for third.  Eidelman was paired up all five rounds and scored an impressive three points He picked up almost 30 rating points and tied for the second place Under 2250 prize. The only other full point upset was NM Robert Shlakhtenko surrendering the full point to Bobby Hall.  Hall was paired up all five rounds, and he also scored 3 points to finish in the tie for second U2250.  Not too bad for a player originally seeded 30th in the 43 player field! There were a few draws, the most notable being IM Andranik Matikozyan giving up half a point to Jeffrey Chou. In round two, the top seeds starting to play each other.  The top players were definitely tested early, but most of them prevailed.  At the merge, there were nine perfect scores remaining.  On board one, WGM Tatev Abrahamyan faced IM John Bryant.  Abrahamyan built up a winning position and finished the game with a nice tactic.  Can you spot the winning tactic?

Show Solution On board two, Kiewra defeated NM Lokesh Palani while, on board four, IM Sheng defeated NM Noam Feinberg.  Since board three ended in a draw between WGM Atousa Pourkashiyan and Anthony Ge, there would be three perfect scores entering the last day. Round four would be a critical round.  On board one IM Kiewra faced WGM Abrahamyan.  Kiewra came out ahead.  Here, he annotates critical parts of the game. IM Sheng faced IM Matikozyan on board two.  Since Matikozyan had given up a draw in round one, he was the highest rated player at 2 ½ out of 3.  Sheng defeated Matikozyan to emerge as the second perfect score. In round four, there was an instructive tactical exchange on board three of the Under 1850 section.

Show Solution The first result of round five was the quick draw played by Sheng and Kiewra.  Alexander Costello had a chance to join the first place tie.  All he had to do was beat IM Bryant with Bryant having the white pieces!  Costello wasn’t able to do so, and he had to settle for clear first Under 2250 and $600. The section winners were: