If A King Falls And No One Sees It: GM Rogers on Berlin 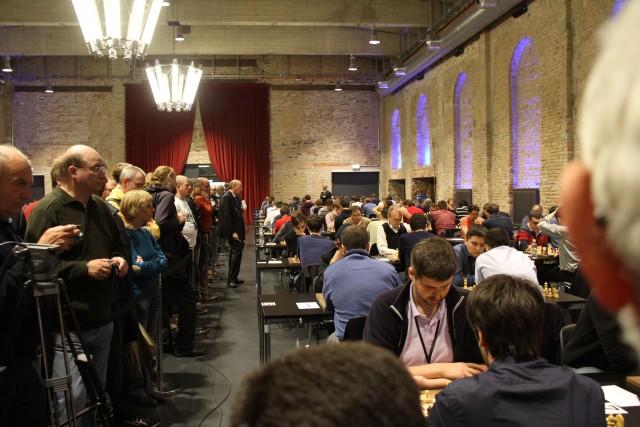 Photo Cathy Rogers
What do you call a tournament where you are charged 9 Euros for the right to be in a tournament arena where you are unable to see any games, identify any players, find a seat in the commentary room, listen to commentary in your own language, or even connect your mobile phone to the internet to watch the games online? Welcome to the 2015 World Rapid and Blitz Championship! When FIDE announced that the World Rapid and Blitz Championship was going to be held in Berlin - home to 100 chess clubs - rather than Siberia or another of the world body's preferred venues, chess fans - particularly German chess fans - gave a hearty cheer. Changing the dates from June to October and lining up the event to clash with Millionaire Chess and the Isle of Man PokerStars International was hardly a diplomatic move but at least those players not otherwise committed could entertain the Berlin fans. And when triple World Champion Magnus Carlsen confirmed his attendance, a success was assured. Watching from afar on the first day I was surprised to see so many grumbles about the tournament. The internet coverage was comprehensive, viewer numbers excellent, and the fighting level of the tournament excellent. Carlsen looked in great shape and in the absence of Hikaru Nakamura otherwise engaged at Millionaire Chess, his world rapid and blitz title defenses looked achievable. 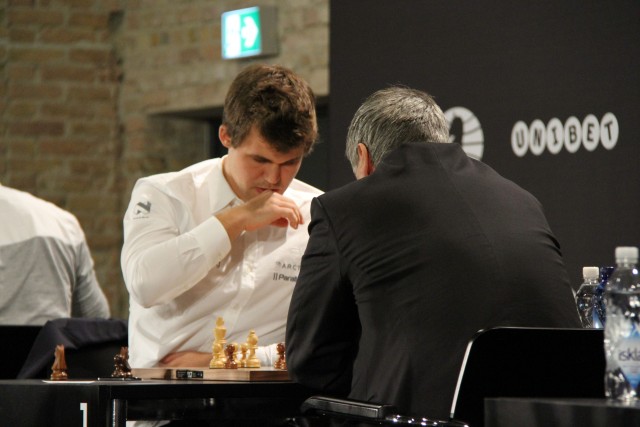 Magnus Carlsen vs. Vassily Ivanchuk, Photo Cathy Rogers
This was not a Moscow 1994 Olympiad level shambles, where a single match was started simultaneously in two different parts of the playing arena, with both sides claiming a forfeit, where the wrong players were awarded medals and where everything from the majority of the arbiters to the plastic chess sets were of inadequate quality. No, in Berlin the conditions for the players were fine; the chess sets, clocks and arbiters all up to standard and security was low-key. (I didn't quite understand why spectators were tested for metal objects and then handed back their mobile phones and tablets, but I guess that is truly low key security!) However, while the players were satisfied enough, the audience was treated with little short of contempt. In the playing hall no matches below the four top boards had name tags, so the crowd had to guess who they were watching (when they could get close enough to the ropes to see anything). Needless to say, there were no screens displaying the games; this was clearly too difficult and expensive for the organizers. The tournament hall was laid out poorly so that only a small percentage of the games would be visible and some genius had decided to put the top four boards on a stage, making it almost impossible for a spectator, even one in the front row, to see what was happening. Or what had happened. Often a game would finish and the result could only be guessed at. (Kings were more often than not placed in the centre of the board to indicate a particular result, which was helpful to those who understood DGT code.) Carlsen tried to help by throwing his pen on the table after a loss but when that wasn't clear enough he resorted to clapping his hands and crying out 'Faer!'. Most people got the message but the results of other games often remained a mystery until the next round's pairings arrived. I was present for ten rounds and did not manage to get close enough to see more than a few moves of any game on the top 50 boards. I never saw the name tags on the top boards - I was told about them by people who pushed their way to the front of the pack. If spectators decided that battling the crowds in the playing hall was too much, they could move to the commentary area, where they discovered that all they could listen to was German GM Jan Gustafsson giving his internet commentary in English. Gustafsson performed a difficult task well, especially when the camera would zoom in on a board without name tags and he would have to riff along the lines of "I am not sure who these players are, but I think Black might be a Spanish friend of mine." However the crowd, as could have been predicted, were mostly from the many Berlin chess clubs so having commentary in German - which Gustafsson could easily have provided, would have been sensible and courteous to the local fans. Worse, despite the obvious overcrowding being evident early on, by the final day the commentary room still had only 50 chairs, and some elderly spectators were seen heading home when unable to find a seat. Those who had the language skills to listen to Gustafsson were also treated to various press conferences, including FIDE President Kirsan Iljumzhinov boasting that the world had 600 million chessplayers and FIDE was aiming to raise that number to 1 billion - "1 billion chessplayers, 1 billion clever people" is apparently FIDE's new slogan. Organizing a tournament which caters for spectators is not rocket science; the London Chess Classic and past editions of the Tata tournament in Wijk aan Zee have looked after thousands of fans year after year.

Carlsen v. Grischuk, Photo Cathy Rogers
Yet FIDE events are so often spectator-free that the organization seems to have forgotten how to cater for fans. Not since the Yerevan Olympiad of 1996 has FIDE conducted an Olympiad where spectators coming from around the world can see every game of their team. A simple issue like a spectator-friendly board layout is bothered with no longer. When AGON, the company that holds the rights to FIDE world title events, was under old management it hosted the 2013 London Candidates tournament. The spectator unfriendly nature of the Candidates playing hall - hidden players, 1970s computer graphics on the demonstration boards - was explained away by AGON chief Andrew Paulsen as part of a grand plan to make sure not too many spectators came along. Moving the next Candidates tournament to Siberia was obviously part of this plan. It was hoped that AGON under new chief Ilya Merenzon was turning over a new leaf, with a new website and ambitions to host events in major capitals. (Despite the source, there seems to be some likelihood that Iljumzhinov's claim that the next World Championship match will be in the USA, could be true.) However unless there is some attention paid to the 'live' fans - as opposed to the internet audience - then there seems little point in hosting World Championship tournaments outside Siberia. World Rapid Championship Leading final scores (158 players, 15 rounds): 1.Carlsen 11.5; =2.Nepomniachtchi(Rus), Radjabov(Aze), Dominguez(Cub) 10.5; ...=50. Onischuk(USA), Seirawan(USA) 8; ...=91. Ehlvest(USA) 7; ...=108. Dlugy(USA) 6.5; ...=123. Shabalov(USA) 6. World Blitz Championship Leading final scores (188 players, 21 rounds): 1.Grischuk(Rus) 15.5; =2.Vachier-Lagrave(Fra), Kramnik(Rus) 15; ...=102. Shabalov(USA) 10; ...=123. Ehlvest(USA), Dlugy(USA) 9.5 ...=142. Seirawan(USA) 9.0.
SHARE: