GMs Mariya Muzychuk and Hou Yifan, Photo Cathy Rogers
At Lviv's most exclusive chess club, the assembled Grandmasters tried to work out what had gone wrong. Their compatriot Mariya Muzychuk had lost heavily to China's Hou Yifan in the second game of the Women's World Championship match and the analysts were convinced that Muzychuk's 19th move was to blame. The Lviv club was set up a few years ago by world title match commentator Adrian Mikhalchishin and Icelandic GM Margeir Petursson, now a Lviv resident, to provide a place for established GMs and rising stars to meet for a weekly blitz tournament (and enjoy some food and wine afterwards).  The club has been a boon for Lviv's best young players; the Muzychuk sisters have been regular attendees and on Thursday the reigning World Girls Champion, Natalia Buksa, was there to test the speed of the older GMs. But before the blitz tournament could start there was a post-mortem to attend to, and Muzychuk's defeat appeared to be taken personally by many of those present. This was not so surprising since GMs present such as Mikhalchishin and Ukraine Olympic coach Alexandre Sulypa had known Muzychuk, the daughter of two chess teachers, since she was very young. Eventually the conclusion was reached that Muzychuk had no clear path to equality and her opponent, the strongest female player in the world, had simply outplayed the local favourite. Muzychuk's solid draw in the first game had been widely praised as excellent match strategy; now it seemed like wasting a game with the white pieces. By the end of the night, after plenty of fine wine had been consumed, most agreed that Muzychuk had a make-or-break game on Saturday. Like Anand in his 2014 world title challenge against Carlsen, Muyzchuk, 22, needs to strike back immediately. (The need for a game three win is probably even more urgent for Muzychuk, compared to Anand, because the women's match is shorter and in games 4 and 5 Hou will control the white pieces and could potentially have run away with the match by the halfway point of the ten game contest) It was clear that Thursday, which had started so promisingly, had turned sour for the locals. Rewind half a day. A light blanket of snow covered Lviv in the morning, making the city centre – already World Heritage listed – seem even more picturesque than usual. Upon arrival at the match venue, the Potocki Palace, I was told that soon after the world title game was underway I should head down to City Hall where a chess flash mob was to be unleashed on the citizens of Lviv.

Photo Cathy Rogers
Down at the town hall a giant banner promoting the Muzychuk-Hou match had been erected at the front of the grand old building. Dozens of girls, teenagers and younger, were waiting impatiently in the cold for the signal to begin flash mobbing.  Inside the town hall, old men were unaware of what was about to unfold outside, concentrated around a television screen showing the position from the World Championship game.

Photo Cathy Rogers
Then the music and the dancing started; at first everyone together, then two groups of 16 colour-coordinated teenagers lined up against each other (including two slightly embarrassed boys as kings), then 16 elaborately dressed traditional Ukrainian dancers, then a march led by a girl in a queen costume.

Photo Cathy Rogers
The fun continued for 20 minutes, attracting a big crowd and causing the passing trams – all adorned with flags promoting the world title match - to slow to a halt in order to allow the passengers to enjoy the show. The flash mob was an idea devised by the city council who have worked with the match organisers to make sure that, even though the match is effectively closed to spectators, the Lviv people can enjoy the occasion. (Each day only a few dozen guests, plus journalists, can enter the Palace and watch a screen in a room adjacent to the playing hall and later see the press conference live.) Thus at various bars and cafes around the city the games are being rebroadcast on television screens – think the King's Diner in Saint Louis at Sinquefield Cup time. For game three a giant screen is planned for the city's pedestrian mall – though whether this will drag the social players who populate edges of the mall away from their games remains to be seen. A hat tip to Russian journalist Evgeny Surov, who tracked down the painting deemed too racy by arbiter Carol Jarecki to stay in the playing hall (part of the gallery at the Potocki Palace) directly above the board. Here is 'Chronos disarms Cupid', a 16th century Italian work, author unknown, which, given a different arbiter, might have been in every photo of the match! 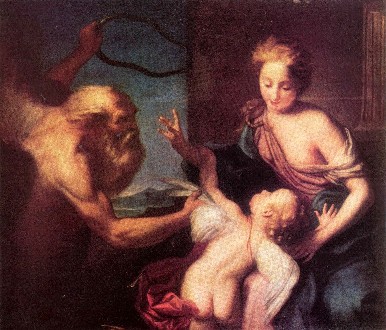 ** The controversy about the 30 minute broadcast delay for the match which has swamped chess web sites seems like a second order issue in Lviv. Fans watching in the local cafes don't care – and probably don't know - that the game is not live, which suggests that if the broadcasters had announced a 15.30 start, instead of the official 15.00, then the complaints would have been minimised. Pavel Eljanov, who was one of the lead pre-match negotiators for the Muzychuk team, tweeted that such a delay was inappropriate for a world title match, though his reaction is likely to be colored by discovering late that a FIDE representative had agreed to the condition long before the match without informing the Ukrainian side. Eljanov's reason - “It's not so effective (ask Borislav Ivanov why) and the most primitive measure” - is strange since the half hour delay is directed against far more sophisticated cheating methods than that used by Ivanov. (A time delay prevents an off-site accomplice from watching the game online and transmitting computer suggestions to a player rather than the cruder methods involving bringing your own computer chess program  - on a mobile phone of similar device - to the game.) Nonetheless, there seems to be a certain sensitivity about the issue. When a journalist asked a question about the delay at the second game press conference, Hou barely had time to say that the decision was not up to her before host Anastasia Karlovich shut down any further discussion by explaining that the delay did not affect the players at all (which was true).

Photo Cathy Rogers
**Games are broadcast with commentary via  http://lviv2016.fide.com/  , starting at 8.30am AEST.  (Just try to forget that the games actually started half an hour earlier!) Find GM Rogers' preview on the event here.
SHARE: