Hartmann on the Amateur Team East

You should play the Amateur Team East, everyone told me.

It’s the best tournament around, they said.

After traveling to New Jersey to participate in this year’s 50th Anniversary edition, I can categorically confirm that yes, that advice was right. The Amateur Team East is a one-of-a-kind event, something that needs to be seen to be believed, and I’m thrilled that I got a chance to sample it. This year’s tournament saw 329 teams – four more than the advertised limit, with head honcho Steve Doyle conjuring space to accommodate players who flew in without pre-registering! – compete over three long days of chess, with the 2186-rated corporate team from SIG Susquehanna (“SIG Calls”) claiming top honors with a perfect score of 6/6.

But the USATE is equally a story about the teams who don’t make it to the podium, and who don’t get to play in the big room. People come to win, sure, but the “fun factor” is more important. Look around the playing hall, and everywhere there are team combinations built more around camaraderie than strict rating. GM John Fedorowicz is playing with a bunch of B players.

IM Hans Niemann teamed up with Tani Adewumi and two of Tani’s coaches. 91 year old Eugene Salomon is manning second board (with some byes) for the “Oldest Team in Town.” US Chess sent a team, too. While “We’ll Fix MSA Later” – rest assured all results in MSA are as they should be, much to my chagrin! – had little shot at any trophies with a team rating of 1917 entering play, we bounced between rooms, winning and losing, and having a ball all along the way.

Top honors at the 2020 Amateur Team East went to “SIG Calls.” The team of IM Atulya Shetty, Eric Most, Brian Luo, and Justin Brereton ran the table, winning every match on their way to the title. Along the way they mowed down the 2199-rated “1000 Check P.P. Per Move” in Round 5 and the 2196-rated “Princeton Clementine” team in Round 6, both by scores of 2.5-1.5. 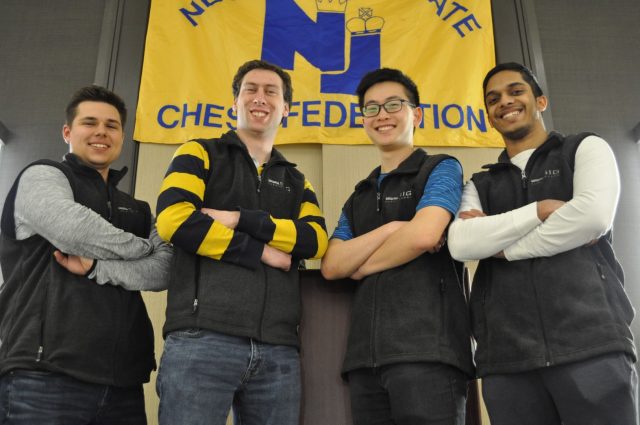 Going 6/6 on Board 1, the 2538-rated Shetty also took the top Board 1 prize on tiebreaks over GM Magesh Panchanathan, GM Alex Stripunsky, IM Yury Lapshun, and IM Alexander Katz. Second place on tiebreaks with 5.5/6 went to the 2175-rated “Unruly Queens:” WFM Martha Samadashvili, Evelyn Zhu, Yassamin Ehsani, and Ellen Wang. And if you’re wondering, yes, this is an all-girl team! 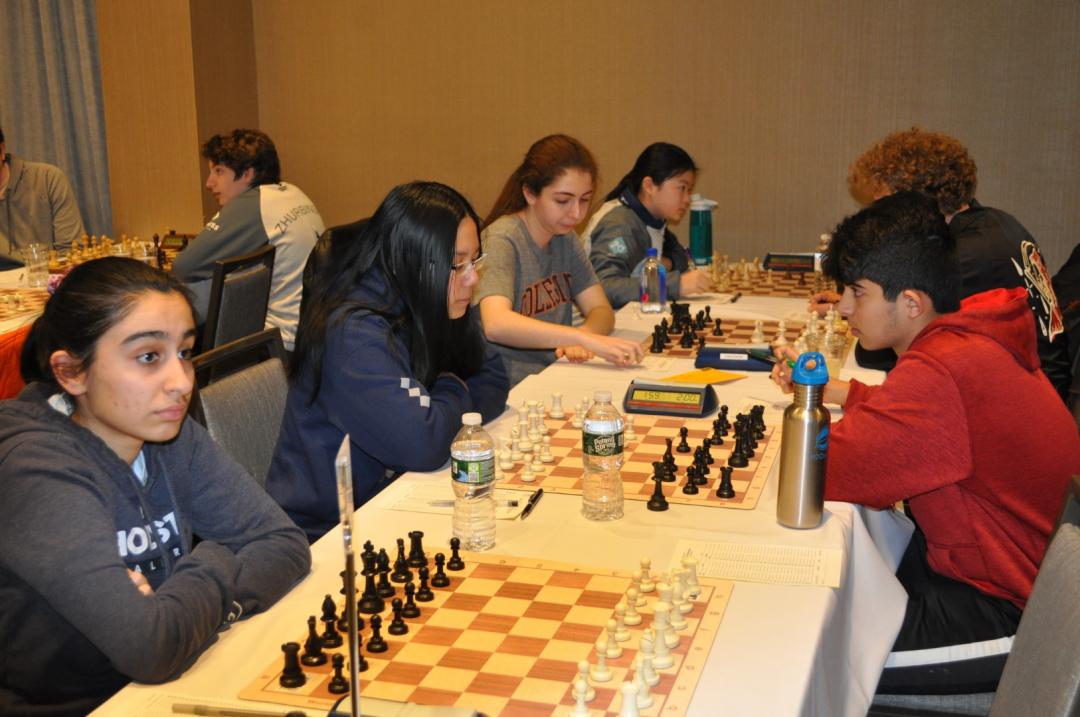 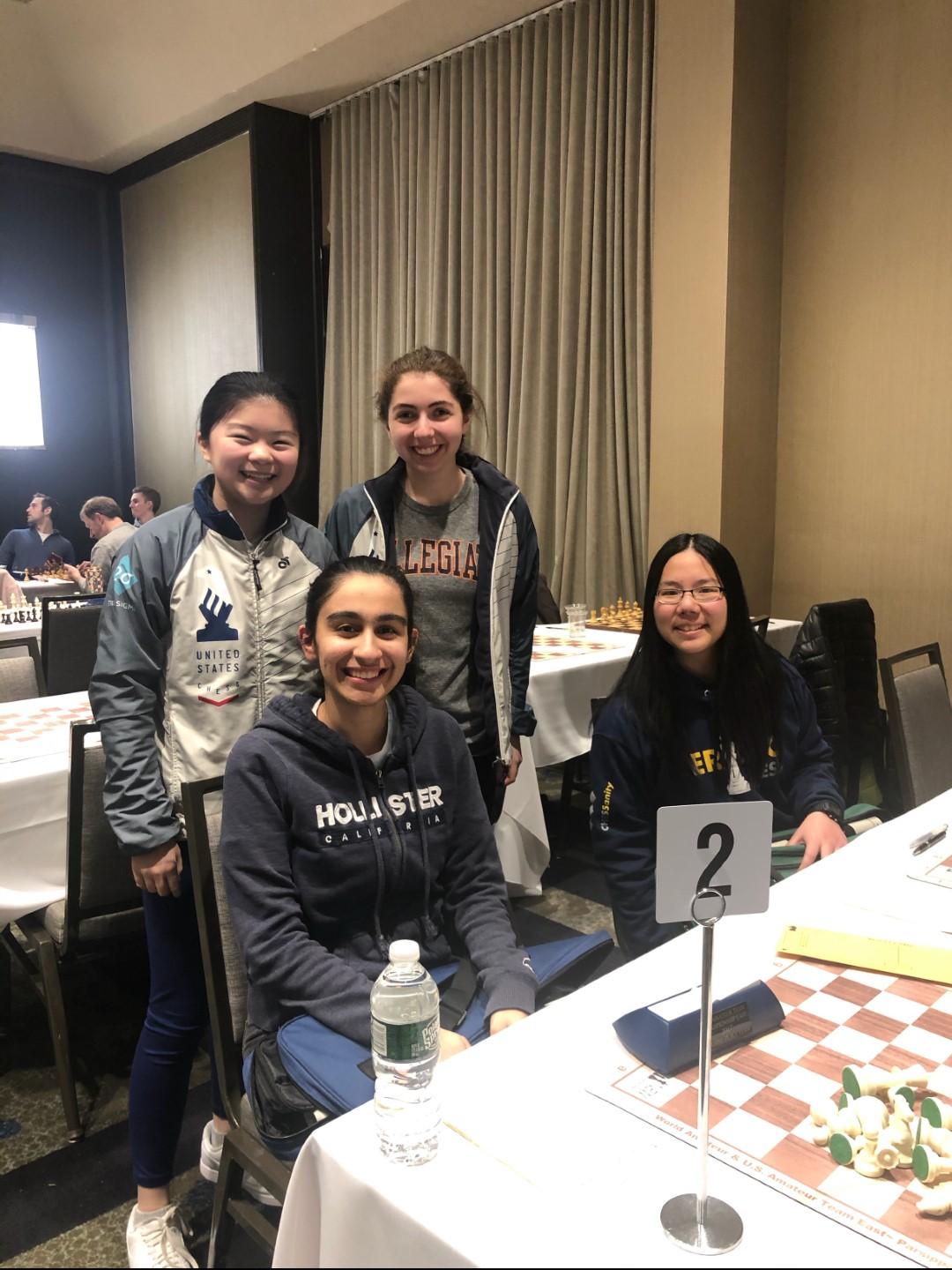 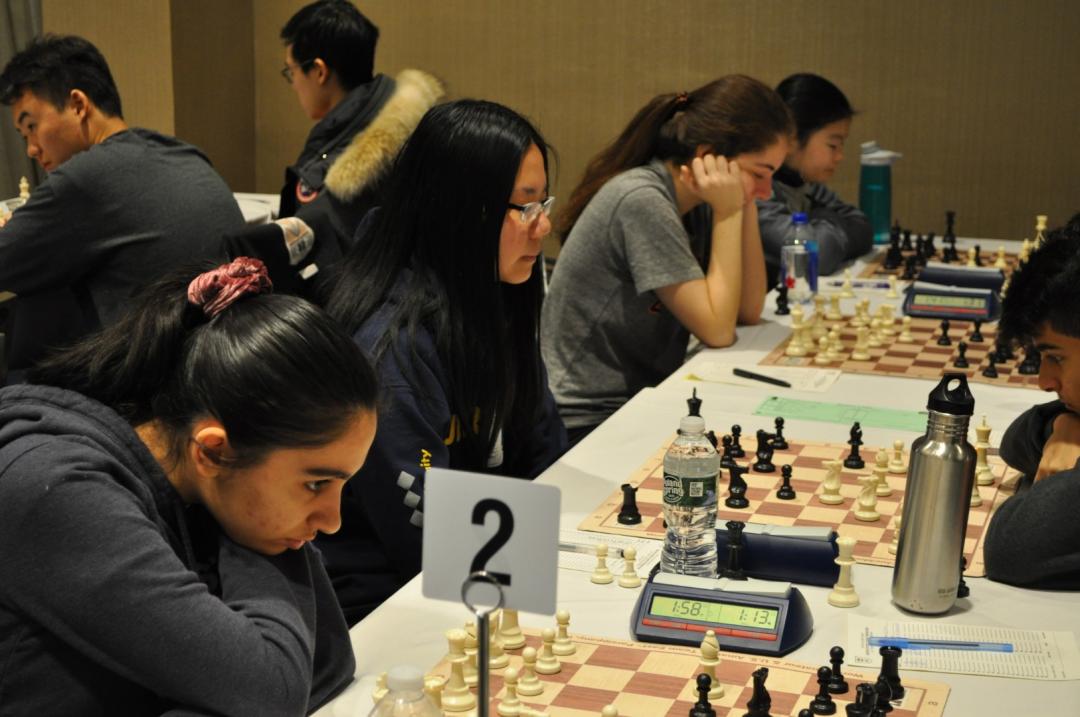 Here are three key games from the Unruly Queens. Thanks to Alessandro De Marchi-Blumstein for his assistance in obtaining them. 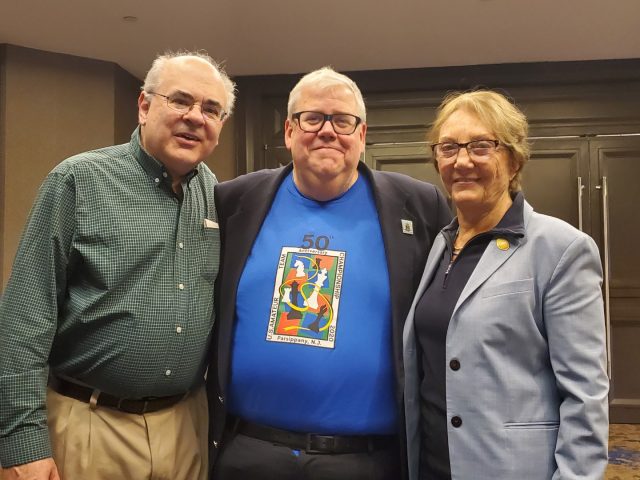 Tournament Organizer Steve Doyle is a dynamo, seemingly everywhere at the playing site all at once, but nowhere is he more at home than at the podium, handing out a stunning number of prizes to people with different driver’s licenses or state quarters. 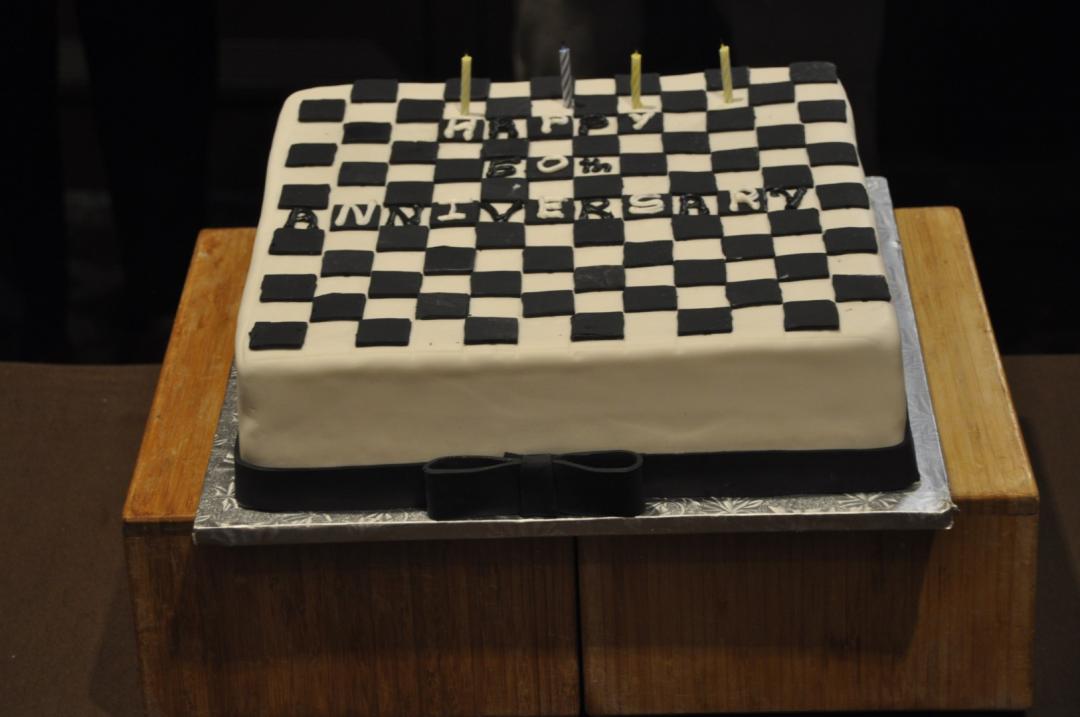 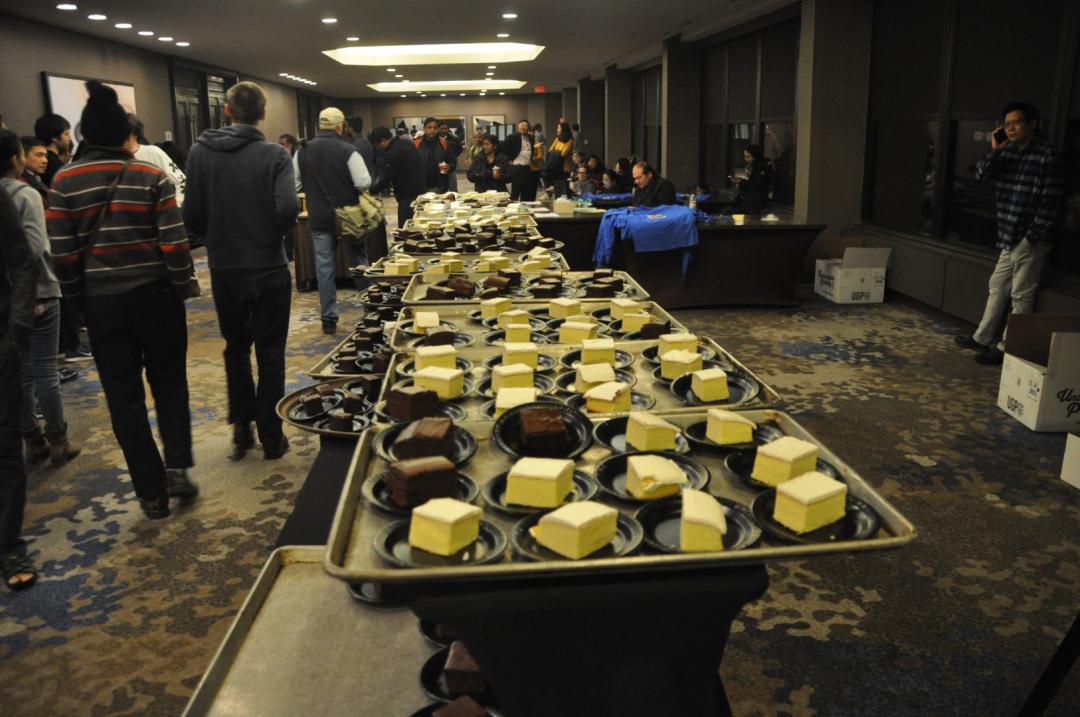 The chaos and laughter before each round was infectious, and everyone, even those who didn’t win games or prizes, had a great time. The coffee and cake for 1400 might have helped with that too. 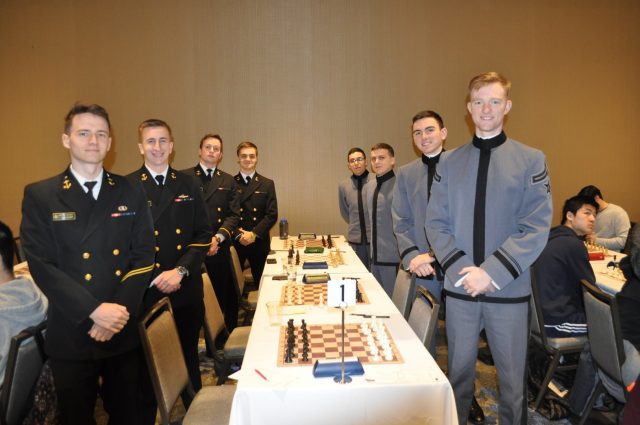 One of the best traditions at the USATE is the annual Round 3 matchup between teams from West Point and the Naval Academy. This year’s pairing ended 3-1 in favor of the Army Cadets. 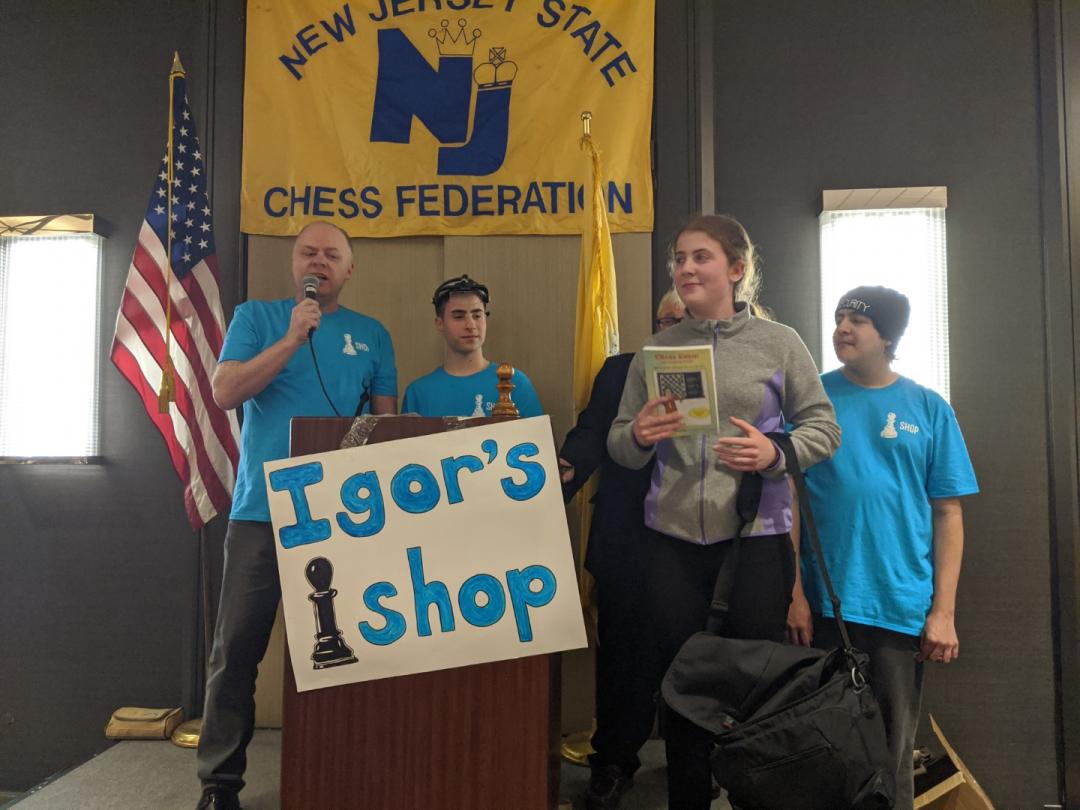 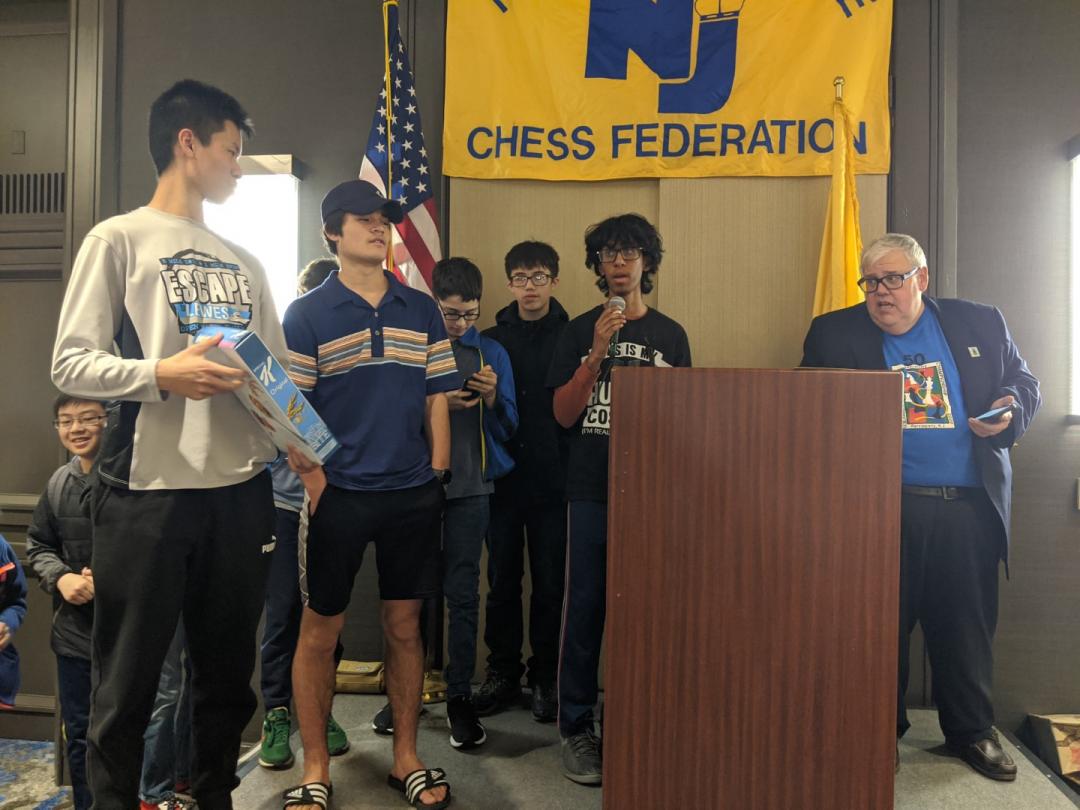 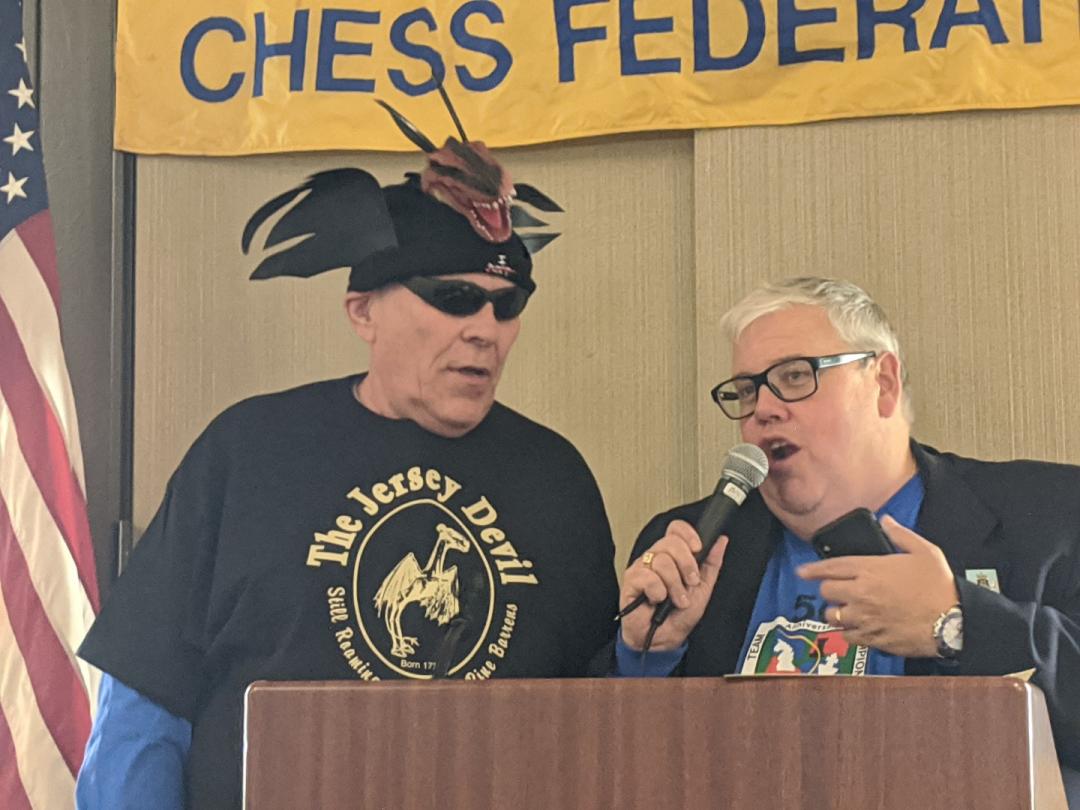 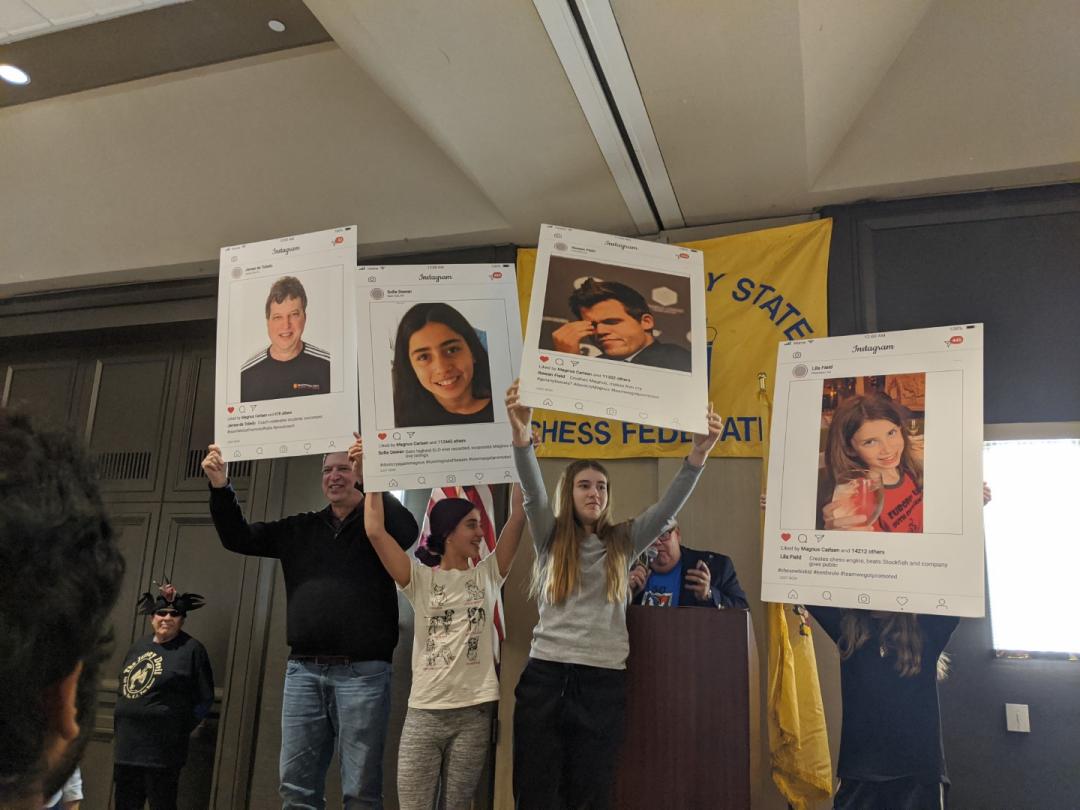 So many likes for "We've Been Promoted"

Awards for Best Gimmick were presented to “The King Coffee Quartet,” a singing duo (?!) and “The Pawn Shop,” a skit featuring friends and family of IM Igor Khmelnitsky, and the Best Name prize went to (what else?) “Caruanavirus.” A complete awards list is available at the New Jersey State Chess Federation website. 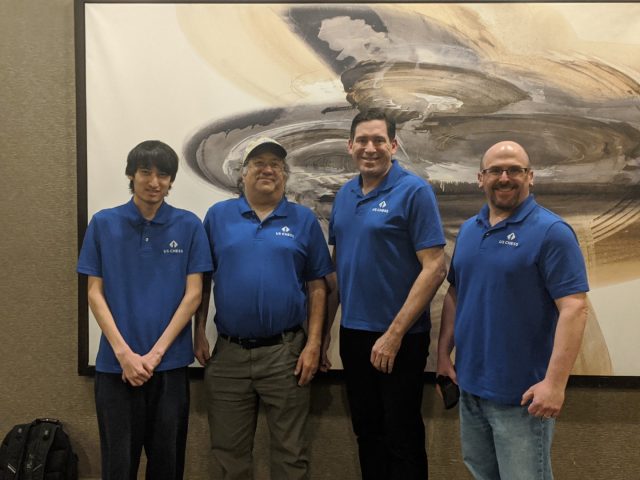 The US Chess team struggled a bit in Parsippany, and no one more than “Your Humble Writer.” After a solid draw against a 2150 player in Round 1, one where I probably should have kept trying to push my advantage in the final position, I found myself with this position on the board sometime close to midnight on Friday.

My opponent (William Cuozzo, MIT C) spent much of the game holding on to the pawn he snatched in the Two Knights, and I kept trying to find ways to break into his solid position. With my clock ticking away, I confidently looked to press my advantage with 44. … Rc8?? only to be faced with the shock of 45. Qxd3!, using the pin to win a piece. After muttering what I’m sure were a few unprintable words, I tried to find a way to avoid having to resign immediately, and I settled on a move that used some tactical themes I’d sniffed out a few moves before. It turns out that after 45. … Rc1 Black can miraculously draw if he plays like a computer. I didn’t, and I resigned after White’s 52nd move.

This was followed by three wins over lower rated players, all of whom made me work very hard for the full points. Special shoutouts to Barack Johnson (Success Academy Myrtle Forks) and Henry Buczkiewicz (CCFS Varsity) for playing particularly well. Johnson is an aggressive young player who consistently found the most fighting moves, and I was totally busted against Buczkiewicz in Round 5 before swindling him. He was kind enough to point out my mistakes afterwards.

I was thoroughly outplayed in Round 6 by Stephen Cheng (Millburn HS), losing without great resistance. Kudos to Stephen for a well-played win. This left me at 3.5/6 for the tournament, which was definitely disappointing. But that disappointment was minor when I think of my experience in Parsippany overall. I caught up with old pals from my days in New York, and slightly newer ones from Delegates Meetings and US Opens. I bought books from Chess4Less and legendary NY book dealer Fred Wilson.

And best of all, I got to play chess with my co-workers and friends. What could be better than that? Thanks to US Chess for fielding a team, and a special thanks to Steve Doyle and his team for putting on this extravaganza year after year after year. I don’t know when I’ll be back, but rest assured, I will be.