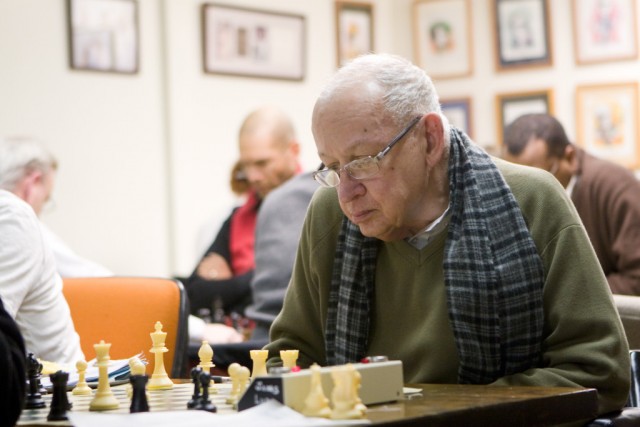 BCC Herb Healy 2009. Harold Dondis
Harold Dondis, a founder of the US Chess Trust, Boston Globe columnist and recipient of the US Chess Distinguished Service Award, died on December 10, 2015 at the age of 93, while playing chess at the Boylston Chess Club. Al Lawrence, Managing director of the US Chess Trust, said, " I worked with Dondis for years when I was executive director of US Chess and he was chairman of the US Chess Trust. He genuinely loved chess and was very generous with his time, energy and personal resources to bring the benefits of chess to others. The final communication I had from him, just a few days before his death at the chessboard, arranged a donation to his beloved Boylston Chess Club" Harold Winston, US Chess Trust Chairman, wrote that, "Harold (Dondis) was a key founder and Trust Chairman from 1967 at its inception until 2000, when he wished to step aside as Chair in my favor. His advice has been invaluable to me and the Trust. We named the Harold Dondis Award in his honor. He will be greatly missed." Dondis defeated Bobby Fischer in a simul game in 1964. The Boylston Chess Club set up the final position on the board Harold usually played on the Saturday after he passed. See the Boston Globe obituary on Dondis and more memories and photos on the Boylston Chess Club blog. Feel free to share your own memories.
SHARE: