Greg on Chess: Predicting the US Championship 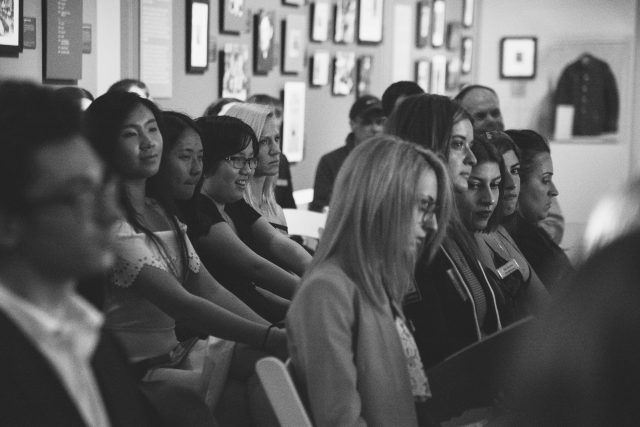 The US Chess Championships and US Women's Championships begin tomorrow at 2 EST. Photo Austin Fuller
IM Greg Shahade, PRO Chess League commissioner, and chess influencer is back with his controversial US Championship picks. These numbers don't reflect US Chess's official opinion, as we predict all 12 players will win the crown. Feel free to post your own predictions @USChess or in the comments. The event begins on Wednesday, April 18 2 PM EST. For the 2018 US Chess Championships, I decided to group the players into major categories, in order of likelihood to take down the event. The Big Three (Combined Win Percentage = 90%) Fabiano Caruana-35% Fabiano won the Candidates for the right to challenge Magnus Carlsen. Fabiano won GRENKE. I’m not picking against the hot hand, and he seems, at this moment, to be legitimately the strongest player in the field. 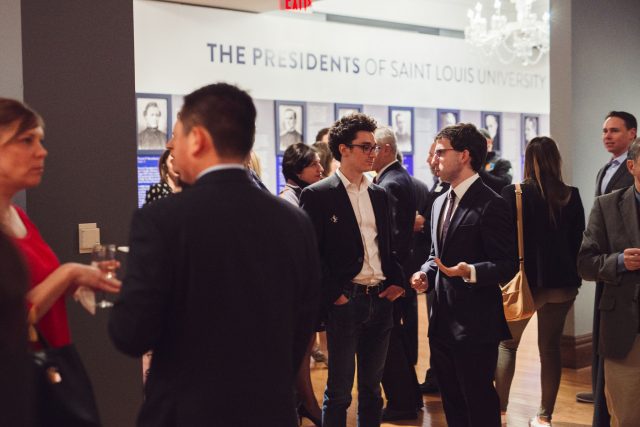 World Championship heads-up contender Fabiano Caruana catches up with live commentator Robert Hess. Photo Austin Fuller
Hikaru Nakamura-30% I’m giving Hikaru the second best odds because he’s probably a bit fresher than Wesley and Fabiano since he didn’t have to play in the Candidates. Being left out also must have stung a bit, and I think he wants to remind everyone that he plays on the same level as the other two superstars in the field. Wesley So-25% Wesley could easily win it again. He’s had a rough time the last few months, but this happens to everyone. They go through peaks and valleys. He is young enough where he still has time to reach a higher peak. It wasn’t too long ago that Fabiano was on top of the world, and came slowly crashing down, only to rise back up and win the Candidates. In fact Caruana’s pre Candidates rating was his lowest since 2014! As defending champ, Wesley also has some pleasant memories on his side. 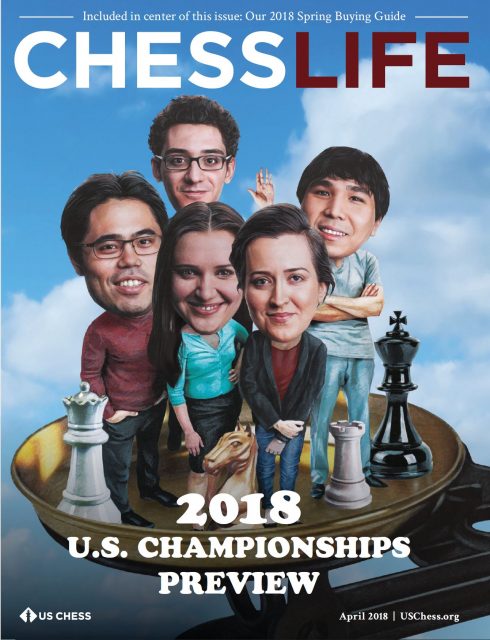 The April issue of Chess Life: Mike Klein on the US Chess Championships
The Contenders: Combined Winning Percentage: 5% Jeffery Xiong-3% Someone has to be fourth likely to win and I give it to Jeffery. This young star is actually the 4th highest rated player in the field by US Chess ratings. He didn’t fare very well last year, but he’s young and still learning how to play in a field like this. I think in 2018 he will be more prepared, and while the odds are stacked against him still, we definitely haven’t seen the best of Jeffery yet. Alex Onischuk-2% Alex is a really solid tournament player, who can draw lots of games, and win when the opportunities arise. You saw this last year when he almost won the title, and I’m not making the same mistake and putting him near the bottom of the pack. Onischuk enters the HOF this year, so he should be in a good mood. 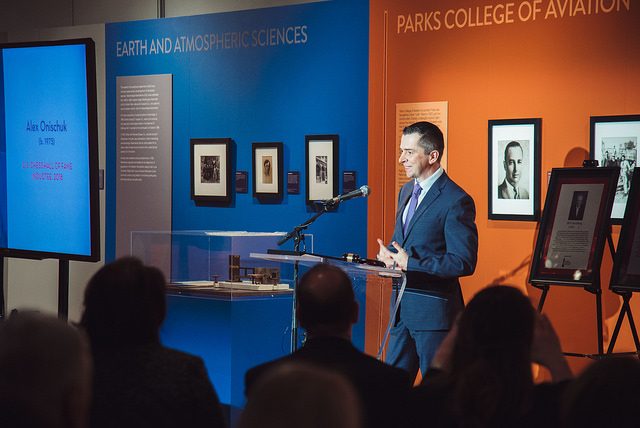 Alex Onischuk at his World Chess HOF induction speech, where he talked about how he always had to fail several times on the way to a major success.
Everyone else: Combined Winning Percentage: 5% Sam Shankland I keep picking Sam to do well each year but each year he doesn’t quite find his stride. One thing I notice is he seems to be more tense than the other players during the tournament. Maybe he puts too much pressure on himself? Or maybe it has no effect and he is just having rough results in the U.S. Championship because the field is really strong. Either way, he’s a strong player who could do well, it’s just a matter of time until he has a big performance. Maybe it’ll be this year? One fun fact: Sam Shankland is one of just two players in this event to have not played in the 2018 PRO Chess League season (Wesley So is the other). Both played in 2017 though. 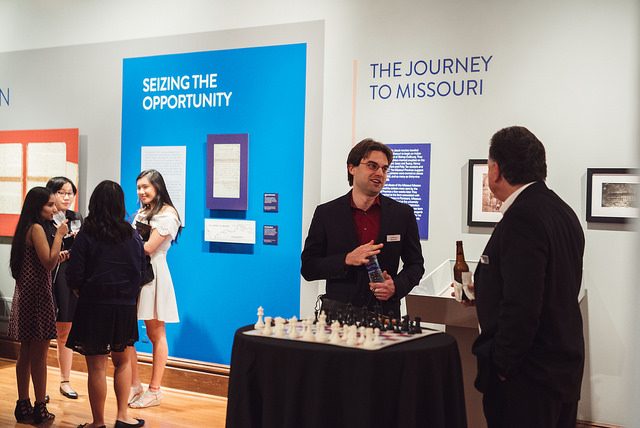 GM Sam Shankland catches up with Yasser Seirawan, Photo Austin Fuller
Var Akobian Var is a a super solid player who was in serious contention to win last year’s event. In 2017 he hung in there and took advantage of key mistakes from his opponents, most notably his shocking win against Caruana. I learned from Var and Onischuk that you should never count anyone out in this tournament. Ray Robson Ray has played about 50 games in the last year and has managed to maintain his 2660 rating, so some would rank him even higher. He had a rough year last year, and we will see if he comes back stronger in 2018. I know he has the talent to do so. 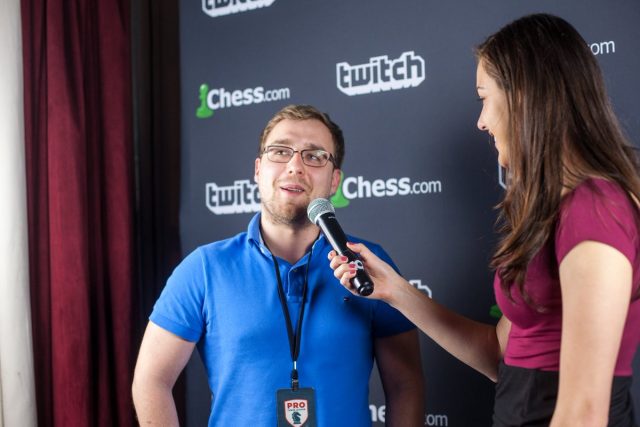 Yaro Zherebukh at the PRO Chess League finals, interviewed by Alexandra Botez, Photo Eric Rosen
Yaroslav Zherebukh Yaro is rated 2640 and did quite well for himself last year. He also had a strong performance in the PRO Chess League, as did many participants in this event. I got the sense that his play sometimes lacks solidity, based on a particularly ugly loss he had with the white pieces to Akobian in 2017. It was the type of loss you don’t see from someone more solid like Onischuk, and the type of thing that can quickly ruin a tournament. But I do enjoy his chess and would love to see him win the whole thing! GO YARO! :) Aleksandr Lenderman Alex’s recent rating is much lower than his strength, and he also is the type of player to do surprisingly well against strong opposition, as evidenced by his upset win over Pavel Eljanov in the FIDE World Cup, and his very strong performance in the PRO Chess League. He was 2565 in September but has already got his rating back to 2600, which indicates that he has been playing well above 2600 level in the last few months. 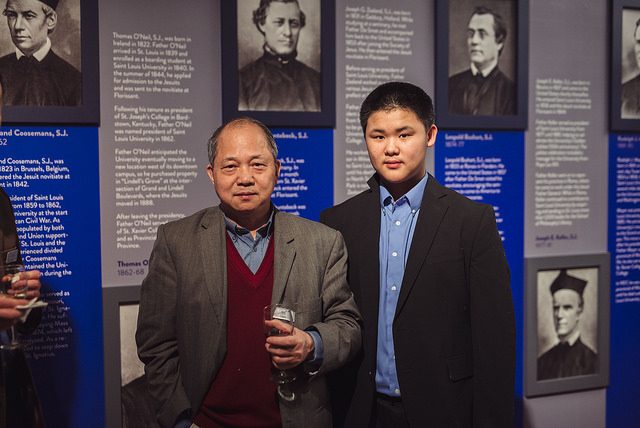 GM Awonder Liang with his father, Photo Austin Fuller for Saint Louis Chess Club
Awonder Liang I wouldn’t be surprised at all if Awonder shocked people in this tournament and finished with about an even score or better. He’s still getting stronger every day. By the time I finish writing this sentence he will probably have gained one FIDE point of playing strength. Zviad Izoria It looks like Zviad just edged out Sam Sevian to make it into the U.S. Championship by rating.  Of course I will miss Sam, and would really like to see him as part of the field in future years.  Zviad is a dangerous player with a history of performing in big games: He won the precedent to the Millionaire Open, the HB Global in 2005. Despite that, he doesn’t play all that many top level tournaments these days, and the players in this tournament may present some tough challenges for him. But if the US Championships last year taught us anything, it's that we should expect surprises.  Find more information on the US Chess Championships at uschesschamps.com, and follow along live commentary with GMs Maurice Ashley, Yasser Seirawan and WGM Jennifer Shahade starting at 2 PM EST.  For more on the US Championship contenders and predictions, see Mike Klein's cover story interview on our new monthly podcast, now on ITunes.
SHARE: