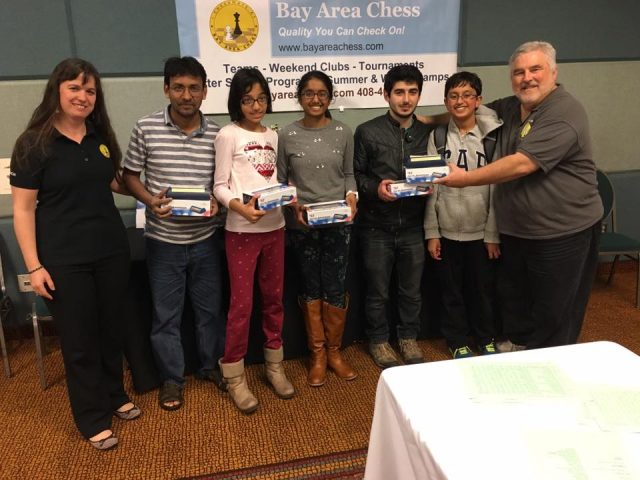 XcellChess Club, US Amateur Team West Champions
In the summer of 2015 I started working with Bay Area Chess (BAC) as the head coach for a new and exciting project. Our goal was to revolutionize the perception of chess in the Bay and align the northern part of Cali with the revival of chess as a sport in the United States. Needless to say my excitement was off the roof, and it still is, as we try to build the next generation of chess superstars. One of the main objectives of our team is to implement an impeccable team spirit around our team and its members. Our motto from the program’s inception was “We win as a team, we lose as a team”, and this has been constantly ingrained in our members DNA and has so far yielded tremendous results. The first time the program’s director asked me to participate in this competition, I was shocked. I have not considered playing in a competition which included the word “amateur” in its name in a long time. Was this an insult? Was the GM title no longer what it used to be and I had to once again try to regain its validity by climbing my way up through the lower tiers of chess competition? No, it was a serious question. I soon realized the US Amateur is more of a tradition and a celebration of chess for all levels. A tournament with no material incentives that draws large crowds of young minds that are just getting started in this world of chess, as well as seasoned experts and even grandmasters that come to have fun and compete in this highly reputable tournament. The series takes place in all four corners of the United states during the President’s Day weekend. History, culture, and tremendous ambitions are all part of the US Amateur Team. Fast forward a year to February 2017 and the most important “amateur” team competition is upon us once again. I am already in my second year as the captain of one of the Bay Area Chess team (we have multiple teams, expanding every year) and excitement is high. We know the competition is getting stiffer and stiffer every year, with talented kids eager to create their own team and strategize to make their dream a reality, become US Amateur champions and possibly make the cover of Chess Life. I have to admit, that the cover is a pretty sweet prospect that always entices and flares the competitive spirit we all share as chess players and sportsmen. 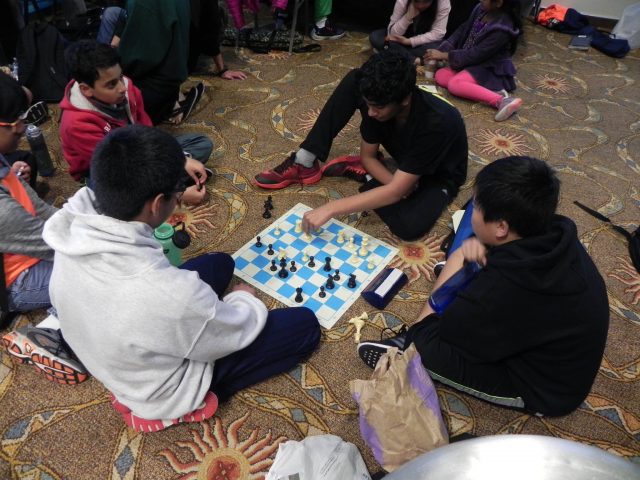 A young and enthusiastic crowd was omnipresent at the USATW
Bay Area Chess lined up no less than 5 highly competitive teams with an average rating close to 2200, the cap imposed by the rules. The BAC Warriors, BAC Hackers, BAC Ninjas, BAC Hammers, and the 2199.5 average BAC Uknighted (spearheaded by the strongest amateur, Daniel Naroditsky) were all ready to make a claim at the top spot. 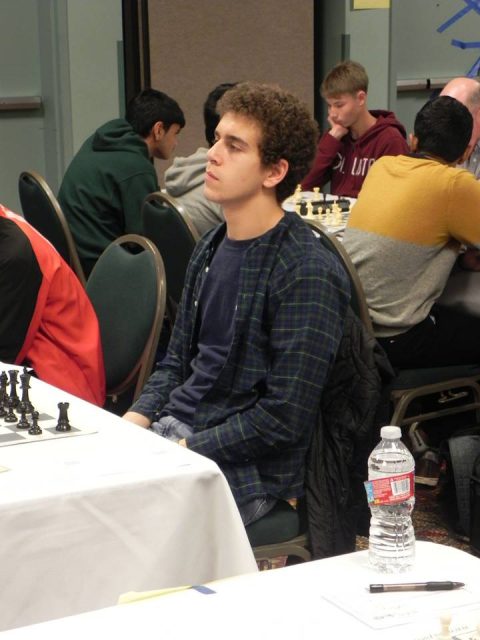 GM Daniel Naroditsky (5.5/6p) must be the strongest amateur in the world!
But BAC was not the only organization that was taking this tournament extremely serious, the Berkeley chess school and even UC Berkeley decided to send powerful emissaries. 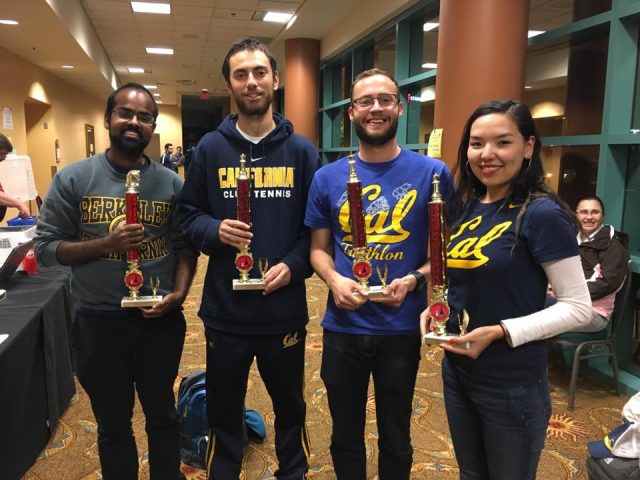 Golden Bears
After a long weekend peppered with highly competitive battles in the bay, the newly founded XcellChess Club, an underdog at the beginning of the completion lining up a pallet of player averaging a “modest” 2100 rating, managed to produce the surprise and top the tables with a total score of 5.5/6 match points and a superior tiebreak than the runner up, The Berkeley Bishops. Haik Manvelyan was an exquisite leader and strongly propelled his team to the highest ranking with a strong performance on board one. The Eswaran sisters, Ashritha and Aksithi bolstered the team, which also featured  Ashik Uzzaman and Arul Viswanathan. 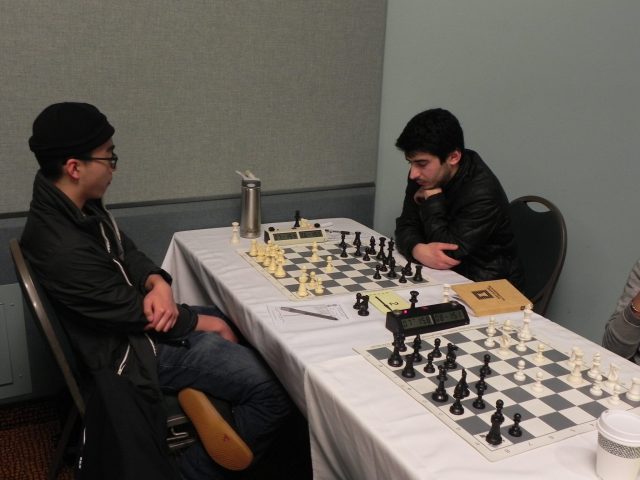 Hayk Manvelyan (black pieces) in action
My team, BAC Hackers, only placed 5th with a total score of 4.5/6. I scored a reliable 4.5/5 but in the end we fell short in a few key matchups. I had a lot of fun and excitement leading our pack of talented aspiring players and I was pleased with the experience and competitive knowledge these kids have assimilated throughout this event. 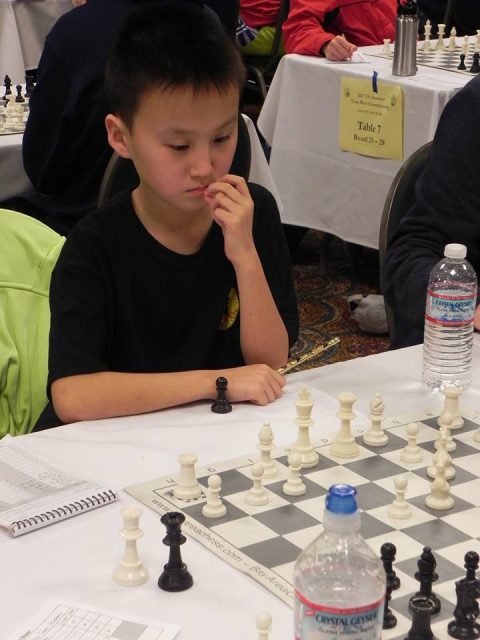 Cristopher Yoo – Board 3 for the BAC Hackers 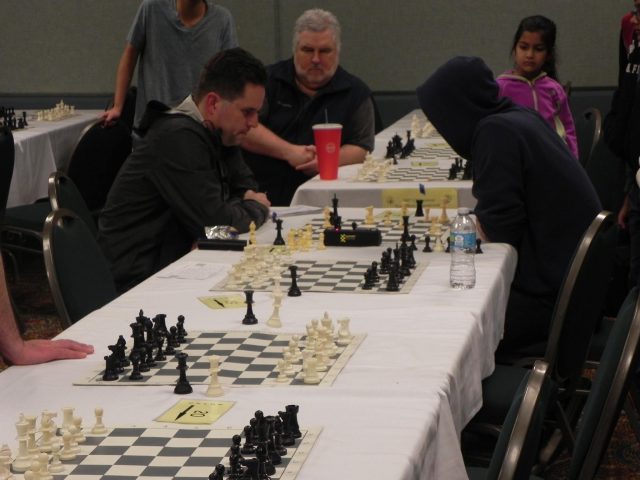 Chirila (protected by the hoodie) hard at work trying to convert in round 5
We will certainly be back next year with a vengeance! In the end, the US Amateur West was about the experience. The excitement from the young kids is truly inspiring and that’s why this tournament will prosper across the United States in the years to follow. Congratulations to the new champions and the representatives of the West in the final USAT competition, the XcellChess Club! I would like to leave the reader with a statement from the Director of Bay Area Chess, Dr.Judit Sztaray : We are thankful for chess community in the West Coast for their continued support towards BayAreaChess. We are honored to have organized the 2017 USATW, which turned out to be one of the strongest in the recent years pulling players from multiple states and having 19 teams alone in the 2000-2199 range. Not event the hectic weather conditions could stop the the overwhelming interests for the scholastic side event as well as for the open tournament, and we had an exciting and vibrant weekend while staying dry inside the Santa Clara Convention Center with over 400 players combined with the scholastic side event. Congratulations to XcellCHESS team for their win, as well as Berkeley chess teams for their runner up places. It was amazing to see a FULL room of teams, competing until the very last minute! BayAreaChess is thankful for Chief TDs Thomas Langland, John McCumiskey and Jordan Langland, Co-organizer Abel Talamantez, and all the staff and volunteers who made this event go smooth and made sure fair play is always followed. We hope to bring back USATW in 2018 to Santa Clara as well, and BAC will be prepared with more space, and more special side events next year. 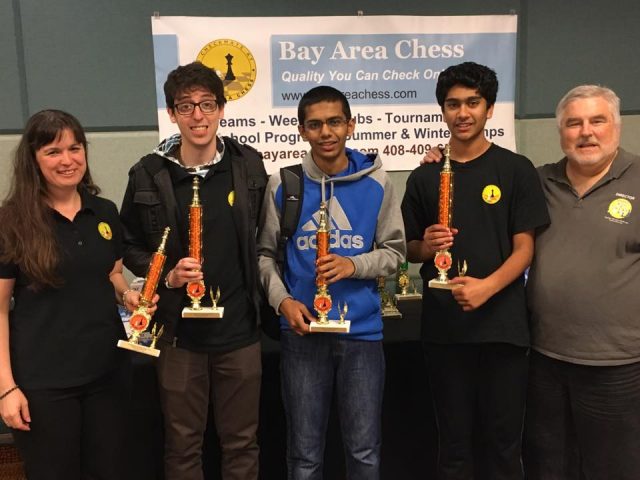