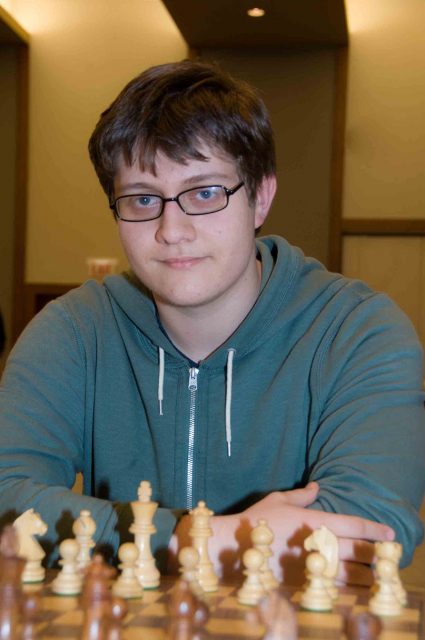 GM Samuel Sevian at the Chicago Open. Photo: Betsy Dynako Zacate
GM Sam Sevian won the 12th annual Philadelphia International with an undefeated score of 7 ½ - 1 ½ pocketing $5000 for clear first.  Sevian started as the second seed, but the tournament would be far from easy.  There were 12 GMs, 17 IMs, 24 FMs, 3 WIMs and 3 WFMs in the 115 player field.   There were a total of 49 foreign players representing a total of 21 federations, so this was truly an international event.  The entry fee was structured to encourage only the stronger players to enter.  The strategy worked as only eleven of the 115 players were below 2000 in either USCF or FIDE rating. Round one did feature all competitive games as the pairing cut was 2245 FIDE.  In spite of the fact that virtually all the games were master vs. master, the stronger player won in almost all cases.  There were a handful of draws and only five upsets.  The biggest surprise of round one occurred on board four as Alexander King, FIDE 2236 had white versus GM Victor Mikhalevski, FIDE 2581 and pulled off the upset.  Mikhalevski had a reasonable tournament scoring 6-3 overall and tying for 9th, but that is clearly a disappointment for such a strong GM, though it probably shows just how tough the event was this year. In round two, the matchups were even more competitive, and the results showed.  On the top boards, there were several draws surrendered as GM Aleksandr Lenderman drew with WIM Jennifer Yu on board three, and GM Julio Sadorra surrendered a draw to Aaron Grabinsky on board six.  It would certainly be too early to talk about norm chances, but there would be several key upsets this round:  FM Brandon Jacobson defeated IM Gabriel Flom on board seven, FM Josiah Stearman defeated GM Abhimanyu Puranik on board eight, and Mark Plotkin defeated IM Vignesh Panchanathan on board 15 while his father FM Victor Plotkin defeated IM Joshua Sheng on board 18.  After only two rounds, the number of perfect scores had been whitled down to 18. In round three, there were no upsets on the top boards, but there were several games where norm seekers were making their presence known.  FM Brandon Jacobson drew with IM Evgeny Shtembuliak on board six and FM Victor Plotkin drew with GM Thal Abergel while Grabinsky defeated IM Daniel Gurevich  to also get to 2 ½ out of 3.   In an equal position, Gurevich makes a mistake.  Can you spot the tactic that enabled Grabinsky to win?