The latest edition of the recurring Bay Area Chess Championship series was held June 16-18 and directed by NTD, IA John McCumiskey. The tournament drew two Grandmasters, one International Master, and five other national masters. The rising popularity of these FIDE rated Open sections has led to packed rooms in all events. In the aptly named Beat the Heat Championship, players took refuge indoors from the summer sun. This event series continues to draw the cream of the crop in the Bay Area to regular tournaments, and resulted in a total of 85 players playing over weekend, all competing for the total prize fund of $5,000. 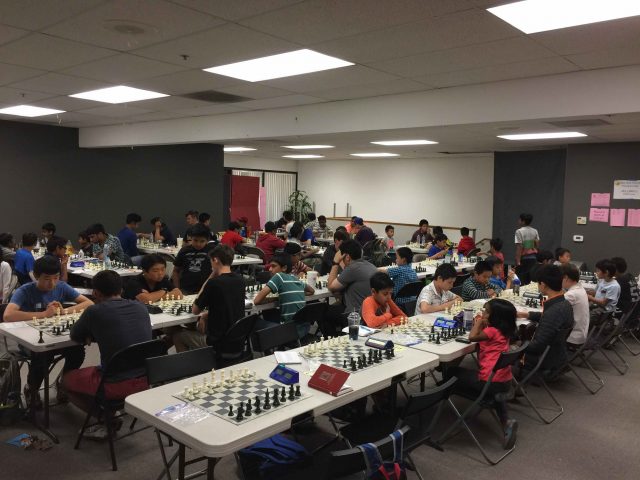 The room was packed at the recent BAC Beat the Heat Championship held June 16-18 in Milpitas, CA.
GM Conrad Holt and 46 other players started the tournament on Friday evening in Milpitas, and continued to play two games on Saturday and Sunday, all with the same time control, G/90 + 30. The other 38 players chose the 2-day schedule, and played two quick games of G/60 + d5 on Saturday morning, and then merged with the 3-day schedule on Saturday afternoon for Round 3. Out of the 24 players in the Open section, only 9 players chose the 2-day schedule. All games with G/90 + 30 time control are FIDE rated in the Open section. These tournaments provide many local juniors with the consistent opportunity to both improve their FIDE rating and continue to attend strong USCF tournaments. At the end of the long and incredibly hot weekend, GM Conrad Holt won clear first with 4.5/5 points in the Beat the Heat Championship, only allowing a draw to GM Enrico Sevillano, and defeating IM Alexander Katz to earn the $900 first prize. IM Katz finished clear second, and GM Sevillano, NM Jack Zhu, NM Siddharth Banik, NM Gabriel James Bick and NM Ivan Ke shared third. NM Bick’s draw with GM Sevillano and NM Ke breaking the 2300 USCF barrier in the process were immense accomplishments for our young and talented players. Mansoor Mohammed took clear first in the U2000 section, and James Wagner won the U1600 section. 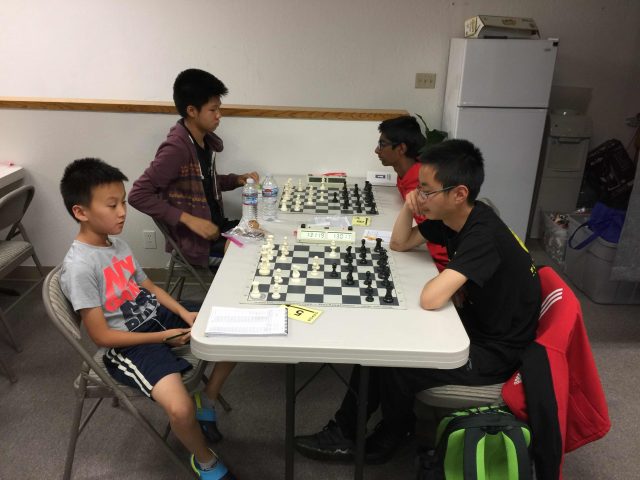 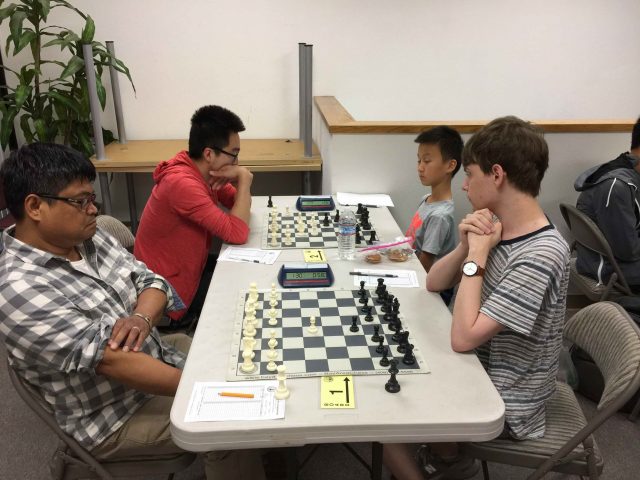 GM Enrico Sevillano and GM Conrad Holt face each other in Round 4 on Board 1 next to NM Jack Zhu and NM Christopher Yoo. 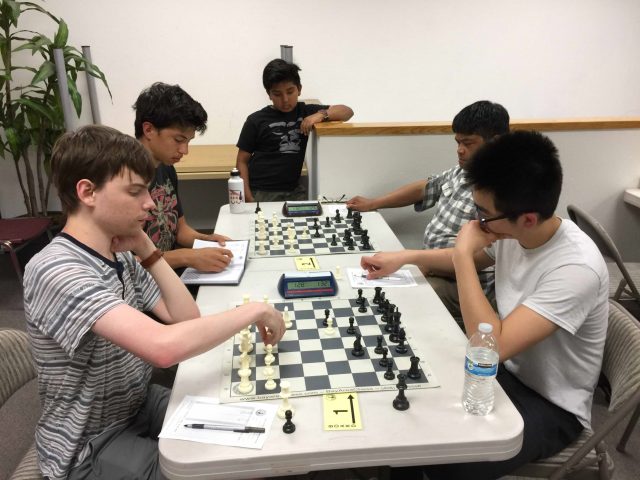 Last round battle between GM Conrad Holt and NM Jack Zhu on Board 1 and between NM Gabriel Bick and GM Enrico Sevillano on Board 2.
Below are two games from the Championship annotated by IM Vignesh Panchanatham.   This trend of out of town GM attendance is common to Bay Area Chess events. GM Melik Khachiyan attended the Best of the West Class Championship over 2017 Memorial Day weekend and tied for first with six (!) other players: GM Zviad Izoria, NM Jack Zhu, NM Pranav Nagarajan, NM Ivan Ke, NM Gabriel James Bick, and a resurgent NM Michael Aigner. For complete results please visit the Championship’s result page: http://bayareachess.com/events/17/0616sp/ Upcoming Bay Area Chess Championship tournaments include the GM Browne Memorial Championship from July 21 to 23 and the IM Tate Memorial Championship from Aug 18 to 20. More info can be found at www.bayareachess.com/champs, and be sure to register early at http://www.bayareachess.com/my/champs because spots fill up quickly. BAC offers free entry for any players rated over 2250 if they register 10 days in advance, in order to promote a high level of competition at these tournaments. The tournaments are run by the 2017 USCF Organizer of the Year Dr. Judit Sztaray (judit@bayareachess.com), and directed by FIDE International Arbiters Tom Langland, Richard Koepcke, John McCumiskey, or Jordan Langland. For any questions or feedback, please reach out to BayAreaChess via email at mailto:ask@bayareachess.com.
SHARE: