Final Report on the 88th FIDE Congress 2017 in Antalya, Turkey 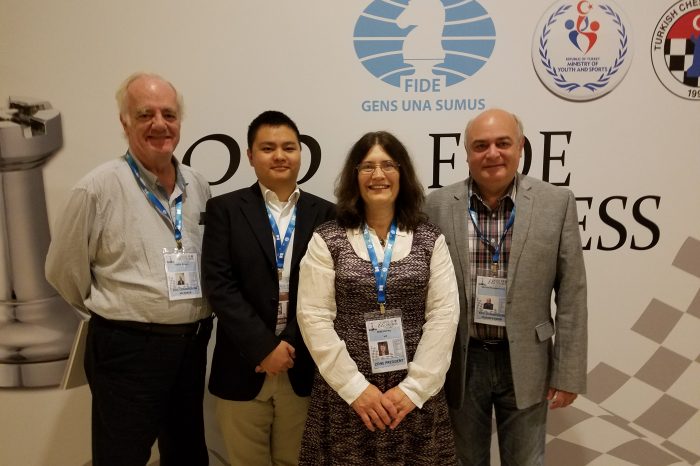 Walter Brown, Grant Oen, Ruth Haring and Michael Khodarkovsky
The US Chess Delegation to the 2017 FIDE Congress consisted of four people: Grant Oen, Manager of FIDE Ratings, Titles and Certifications; Wallter Brown, Councilor of the FIDE Qualification Commission, US Chess Delegate Michael Khodarkovsky, and Zonal President Ruth Haring.  As usual, we worked together to attend and participate in as many of the FIDE Commission meetings as possible and bring to light any issues of concern to US Chess membership. The first order of business for us was the Qualification Commission meeting.  The issue at hand was the awarding of direct titles to players who qualified for World Youth and Cadet events in 2017.  Several events are qualifiers into the World Youth Cycle and the change of direct title rules in the middle of that cycle meant that players in the same cycle played under different conditions.  The qualification commission accepted that a remedy was needed and changed the date of the rating qualification for direct titles to January 1, 2018.  As a result, organizers of these events in the future will need to clearly advertise how the awarding of direct titles works. Grant and Walter submitted reports which you can read, on the discussions in the technical commissions, and with a list of all titles approved: Walter Brown report, Grant Oen report, Suspension of Visa Services. The Development Commission is new.  The meeting was well attended, and Ruth Haring represented the USA Delegation.  A lively discussion ensued regarding how to market chess and make other improvements at FIDE.  The body recommended that an exercise to define the mission and vision of FIDE be done with stakeholders to align any efforts coming out of this commission with the direction of the leadership of FIDE. Michael and Ruth both attended the Commission of Chess Journalists meeting.  The focus in this Commission was around certifications of Journalists to FIDE events and did not involve a plan to get more stories in the mainstream media.  There is a closed system for chess Journalists, who have interview times mandated by FIDE and with organizers in a controlled environment associated with events.  Michael recommended that work should be done to focus on the human-interest stories.  It was noted that the stories that had traction in the mainstream and social media were the “Kovalyov shorts” story at the World Cup and the “headscarf controversy and boycott” of the Women’s World Cup held in Iran. We opposed a prepared proposal by the Commission to impose fees on chess journalists and to require organizers of FIDE events to provide free accommodation to chess journalists who are approved by the FIDE Journalists Commission. 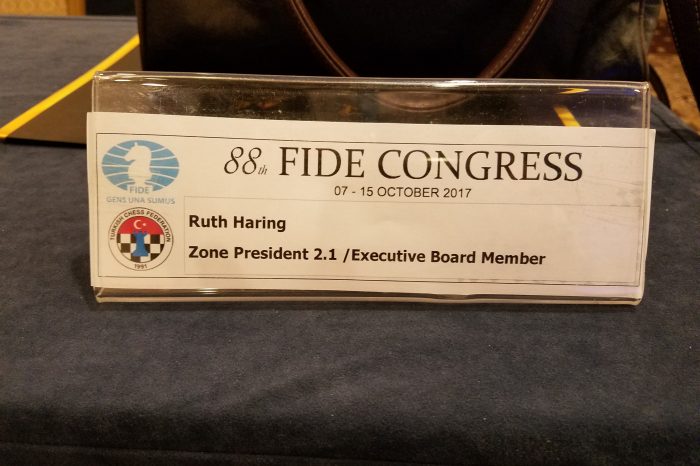 The Verification Commission meeting was well attended and present from the USA were Michael, Ruth and Grant.  The Chairman, Graham Boxall, as usual did a superb job explaining the work of the Verification Commission.  Its work is somewhat like an internal audit; however, their report and recommendations are not binding. The commission has been highlighting areas of concern, and many of those concerns have not been acted upon by FIDE leadership.  Ruth Haring suggested that perhaps it is the right time to change the Regulations (FIDE Statutes, Handbook), so that recommendations out of the Verification Commission have some teeth in them by making the Treasurer or other designated FIDE official responsible to report back to the General Assembly on the analysis and actions taken because of reported concerns.  A straw poll was taken, and the body agreed that this was a desirable change to regulations. Another discussion that was lengthy, was about the Agon contract, which has been in default since it was signed.  After much discussion, the body took a straw poll and the consensus favored terminating the contract with Agon. Ethics Commission – The formal complaint by the Chess Federation of Canada (CFC) to the Ethics Commission was ruled “not admissible”. The CFC asserted that it was acting “in and for itself on behalf of GM Anton Kovalyov.” The complaint, however, was not supported by any statement by the player.   The CFC reported that Kovalyov was not willing to participate in the public hearing or provide the CFC with written authority to represent him. Without authority from Kovalyov, the Chess Federation of Canada was not able to proceed with the complaint on his behalf. It is obvious that the Kovalyov incident, which occurred before the start of the third round at the 2017 World Cup, between the organizer and player has some “grey areas,” and it was agreed that that there is a need to address the subject of dress codes for players and officials at different types of events, and clarify the persons responsible for enforcement of dress code regulations. GM Darcy Lima led the meeting of the Social Projects Commission.  He presented two very compelling studies.  The reason that the Commission’s work is exciting is that the Commission decided to be data driven and have studies made in cooperation with professional researchers.  The resulting data can be used in various settings in which chess is introduced, and, when asked for studies and data, the published data can be used. The first work was of prisoners in Brazil and recidivism rates of those in chess programs as compared to the general prison population.  The results showed that for every year in the chess program, corresponding recidivism rates went down!  The second exciting presentation was a case study done in an educational setting for autistic children.  The approach involved integrating chess into the environment initially and then gradually moving to chess lessons.   Preliminary results from the first year are that they successfully taught the autistic subject chess, and, in fact, he will be teaching chess to other children in a regular classroom setting in the second year of the study which is in progress now.  The results are simply stunning, and we are looking forward to the conclusions at the end of the second year. Constitutional Commission – Michael and Ruth attended this meeting of “twists and turns” as the body discussed the questions around the President of FIDE (sanctioned by the US Treasury), and the meaning of all the official letters and decisions of the Presidential Board.  That Mr. Illjumzhinov appears to have completely delegated his power for the good of FIDE is clear, that FIDE believes there would be serious and immediate repercussions to FIDE in the banking world were Illjumzhinov to reassume power is clear.  The completeness of the delegated authority has been questioned.   We discussed that the President delegated the power relating “to any legal, financial and business operations of FIDE,” so he could concentrate on clearing sanctions imposed by the US Treasury.  This seems clear and comprehensive, and the sanctions are still in force. Unfortunately, there was a political aspect to the discussion. When it seemed clarity had been reached, the original issue was raised again. The co-chairs (GM Susan Polgar and IM Martha Fierro Baquero) of the Women’s Commission were not available to attend the meeting, however, there was a full house, including the FIDE CEO Geoffrey Borg.  The Commission Secretary, IA Anastasia Sorokina presented a PowerPoint that included a report on the Women’s World Championship, the European Individual Women’s Championship, the Women’s World Team Championship, etc.  It became obvious that many FIDE events in the non-European world were not reported, particularly in Africa, the Americas, and Asia, though some information about chess camps in the USA was provided.  We raised this point in the meeting and suggested that the report be more inclusive in the future.  CEO Geoffrey Borg spoke about the work he is doing to ensure that women’s events have sponsors by tying certain events to other major FIDE events that do receive bids. 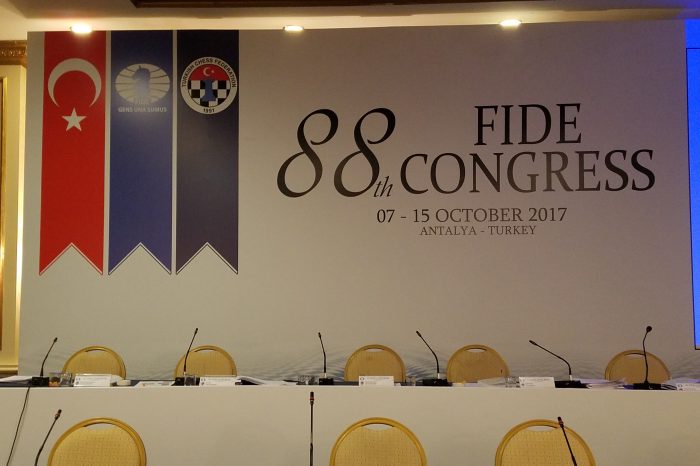 Executive Board – 1st Day - The EB unanimously ratified the agreements of the Presidential Board in which all the powers exercised by the President in legal, administrative and business matters are passed to Mr. Makropoulos, Deputy President, due to the sanctions imposed on Mr. Iljumzhinov by the US Treasury Department. The EB adopted a non-binding straw poll, voting 37-20 with two abstentions calling upon and asking Mr. Iljumzhinov not to aspire to re-election in 2018. However, Mr.Iljumzhinov said that he is planning to run again and asked the EB not to pressure him to make a decision not to seek another term as FIDE President. It is worthwhile to notice that number of national chess federations received official letters from the Russian Embassies in their respective countries. These letters indicated that The Russian Federation(!) (not Russian Chess Federation) nominated Kirsan Iljumzhinov to stand for the re-election as FIDE President in 2018 and suggested federation Presidents support him.  Many letters were received one or two days prior to the start of the FIDE Congress.   They include the following chess federations: England, Scotland, Sweden, Israel, and India. US Chess received a letter after the FIDE Congress in Antalya, Turkey. It’s been discussed that there may be misappropriation of funds provided by FIDE in 2014 to Mr.Lewis Ncube, Continental President for the African chess federations. This matter was moved to Ethics Commission. On Day 2 of the Executive Board, the board focused on its formal agenda.  Of interest was the presentation of the budget by FIDE Treasurer Adrian Siegel.  He announced that a renegotiation of the contract with Agon had taken place, and FIDE and Agon had signed a replacement contract running until 2026.  The new deal resulted in income of 335,000 Euros to FIDE, and the money transfer was confirmed.  There was an expense of 160,000 Euro attributed to Agon in the budget presented, but when the detail of that expense was requested, it was explained that the contract is confidential.  After much to-do and demands for transparency in the spirit of “Gens Una Sumas” the Chair, Deputy President Macropoulos, stated that the Presidential Board would be provided a copy of the contract. Mr. Siegel had adjusted the budgets of most of the commissions because of the unexpected income from Agon deal.  It was raised on the floor that the fee increases discussed in many Commissions, should be reconsidered since they were increased due to budget constraints in part caused by non-payment by Agon.  FIDE agreed to remove the fee increases for further study. Other developments of interest are that a FIDE Trainers Academy was approved over the objection of Luxembourg Chess Federation.  After a reading of the emails, FIDE agreed to change the name of the academy as requested in the objection letter. The following FIDE events were voted on and awarded: The 2017 Antalya FIDE Congress was different than other recent FIDE Congresses because, while we were in Turkey, a diplomatic exchange and “tit-for-tat” suspending visa programs occurred.  US Chess checked with the embassy in Ankara and assured us that all was well since we were already in country with valid visas. For more on the FIDE Congress, see Grant Oen’s report and Walter Brown's article on new US titles and anti-cheating measures.
SHARE: