The 28th Annual Chicago Open (May 23-27, 2019) was the third largest in the series history, drawing nearly 900 players. The Open section was extremely strong, with 71 players over 2200 FIDE and 120 in all. Such was the strength of the Open that IMs were being paired up in round one! The top board bloodletting began immediately in round one. Nearly half of the GMs did not win! Three GMs were upset – GM Boris Avrukh lost to Zachary Dukic, Logan Wu defeated GM Vladimir Georgiev and Ashton Jin defeated GM Dmitry Gurevich – while another seven GMs were held to draws. When GMs rated over 2600 FIDE are surrendering draws in round one, you know it is a impressive event. With all the draws and upsets, there were only 17 perfect scores after two rounds, meaning that the first GM versus GM matchups would take place in round three. Only three players came through round three unscathed: top seeded GM Jeffrey Xiong, GM Yasser Quesada and GM Cemil Can Ali Maradi. Xiong drew with Ali Maradi in round four, and Quesada drew with second seeded GM Dariusz Swiercz, who started the round a half-point off the lead. There were eight players tied for first place with 3.5/4: GMs Jeffery Xiong, Vasif Durarbayli, Yuniesky Quesada, Alex Shimanov, Yasser Quesada, Pavlo Vorontsov, Cemil Can Ali Marandi, and Carlos Antonio Hevia Alejano. Xiong defeated Vorontsov and Durarbayli defeated Marandi in round five, while the next two boards drew. The Quesada brothers (Yasser and Yuniesky) calmly split their point, as did Shimanov and Hevia. This left two leaders, Xiong and Durarbayli, at the end of Saturday’s play, with eight players a half-point behind them. Durarbayli moved to board one Sunday morning for round six, defeating Xiong to take the lead 5.5/6. He would remain there for the remainder of the tournament, despite drawing the rest of his games! 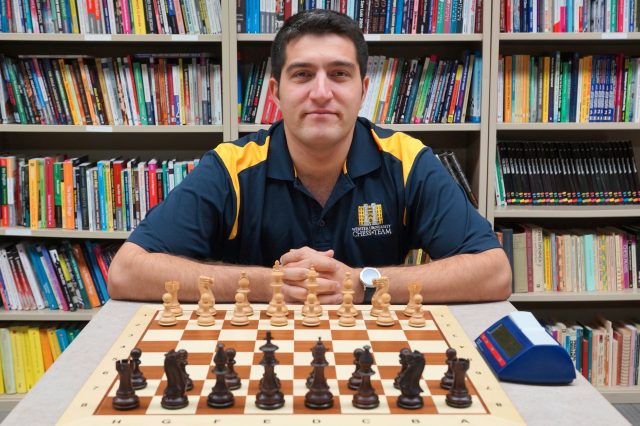 Vasif Durarbayli (photo Polgar / Webster)
Durarbayli maintained his place as sole leader with his seventh round draw against Nyzhnyk, while the pack chasing him grew. Going into Monday's final rounds, Durarbayli led at 6/7 followed by GMs Jeffery Xiong, Illia Nyzhnyk, Yuniesky Quesada and Hovhannes Gabuzyan all with 5.5/7. In round eight, Quesada pressed Durarbayli on board one, but the game was eventually drawn in 55 moves. Xiong and Nyzhnyk was also drawn in 43 moves. There was a decisive result on board three, where GM Swiercz played a nice attacking game versus GM Gabuzyan. Heading into the final round, Durarbayli was still in sole possession of first place at 6.5/8. Five other GMs – Jeffery Xiong, Dariusz Swiercz, Illia Nyzhnyk, Alex Shimanov, and Alex Shabalov – were all hot on his heels with 6/8. Swiercz took Black against Durarbayli in round nine. After Swiercz declined a draw offer, the position repeated right after the first time control, and the game was drawn, guaranteeing Durarbayli at least a share of first place. With draws on boards two and three, Shabalov was left as the only player who could catch Durarbayli with a win. But GM Lazaro Bruzon Batista defeated Shabalov, leaving Durabayli in clear first with a score of 7/9 and earning him a cool $10,300 for his efforts. Nine players finished at 6.5/9 to each win $1388.89: GMs Jeffery Xiong, Dariuscz Swiercz, Illia Nyzhnyk, Alex Shimanov, Lazaro Bruzon Batista, Yunieskiy Quesada, Hovhannes Gabuzyan, Pavlo Vorontsov, and Evgeny Shtembuliak. There were two IM norms earned. FM Aleksey Sorokin is rated 2531 FIDE and already has close to 30 IM norms. (Note: that’s not a typo.) He clearly has the rating requirement for not only IM, but also GM.  So why isn’t Sorokin an IM? Answer: he plays under the flag of the Russian Federation, and the Russians do not pay the application fee for title applicants. Because Sorkin already has two GM norms, he appears to prefer to save his money for his eventual GM paperwork. Sorokin could have made his final GM norm in Chicago with a last round win over Gabuzyan, but he lost, with another IM norm as a consolation prize. FM Seth Homa earned the other IM norm. This is his third IM norm and as soon as his FIDE rating crosses 2400, he can be awarded the title. In round 8, Homa had a key win against FM Ben Li on the way to earning his norm. There were seven “Under” sections in Chicago, and and the winners of those were: Under 2300 Nicholas Matta, 7-0, $5000 Under 2100 Dan Rade, Dane Zagar, Vladyslav Shevkunov, & Ciprian Comsa 6-1, $2666.67. (Zagar prize limited to $1500) Under 1900 Ethan Pau, 6.5/7, $5000 Under 1700 Donald Uzoma, 6.5/7, prize limited to $2000. Grey Sosa 6/7, $5000 Under 1500 George Gonzalez-Napoles & Timothy Speight, 6/7, $3000 Under 1300 David Schmitz, 6.5/7, $4000 Under 1000 Liam Massee, 6.5/7, $1000 Mixed Doubles Susanna Ulrich and Alex Zhang, Amelie Pankov and Leonid Bonder, & Shanthini Saravanan and Pragyan Mishra, 10-4, $1167 each team Blitz Tournament Alikhan Irgaliyev, 8.5/10, $400 NTD Bill Goichberg directed for Continental Chess Association assisted by Boyd Reed, David Hater, Brian Yang, Grant Oen, Tracey Vibbert, Harold Stenzel, Jeff Wiewel, Jeff Smith, Adam Rubinberg, Hiro Higuchi, Chris Baumgartner, and Steve Plotnick. Full tournament details, including many games can be found at www.chicagoopen.net. Previous Continental Chess tournaments can be found at the Continental Chess website at http://www.chesstour.com/cross.html.
SHARE:

Great event as usual! Chicago Open is the best!
[…] the Chicago Open is one of the leading events held on Memorial Day weekend, it’s hardly the only tournament that […]
Loved the Homa/Li game.