Chess and Twitch: Home Away From Home

Many Chess Life Online readers are staying home because of the COVID-19 pandemic. If you have cabin fever, you can virtually visit chess streamers’ homes via Twitch. This article will tell you how to find, interact with, and support chess streamers. You will also learn how to start your own Twitch chess stream, what happens during some chess streams, and how to make money from streaming.

You don’t have to join Twitch to watch livestreams or videos. At Twitch.tv, enter whatever topic interests you (chess, music, video games, etc.) in the search bar. The fastest way to find chess content on Twitch is its chess directory page. Then click on a channel that is live. Most chess streamers are broadcasting from their living rooms or bedrooms. By watching their livestreams, you are virtually visiting their homes.

If lurking in streamers’ homes isn’t enough excitement for you, join Twitch by clicking on the “Sign Up” button at the top right of its homepage. It’s free! When you have a Twitch username, you can say “hello” to some streamers. Most chess streamers enthusiastically acknowledge usernames that appear in their chat boxes. The lyric “where everybody knows your name, and they’re always glad you came,” from"> the TV Show Cheers, fits perfectly. If a chess streamer saw a username of Norm, he or she would exclaim, “Norm!” US Chess Women’s Program Director Jennifer Shahade’s channel is unique, as she often plays chess and poker simultaneously. During her April 10th broadcast—which, like most Twitch videos, is available for a limited time—Woman Grandmaster Shahade scored 32 in one five-minute Puzzle Rush attempt, only 7 lower than her all-time best. Yet Shahade earned that 32 while simultaneously giving users chess tips (such as knight forks being examples of “the importance of pattern recognition in chess”) and playing poker. Then she took on chess challengers in blitz, re-entered her poker “bounty” tournament, and chatted—all at the same time. (Impressive multi-tasking by superjenium!) Two nights later, while streaming chess and poker on April 12, Shahade won $11,527 in the Sunday Special poker tournament. As is typical for chess streamers, Shahade greets usernames and answers questions. For example, when PandaChessAcademy typed in the chat box, “This is great stuff.” Shahade replied, “Thank you so much for stopping by, Jeff.” The username objkshn (pronounced “objection”) asked, “I was at the Isolated Queens. That was fun. Gonna do it again?” Shahade replied, “Yes, that is the plan. We are planning to do it again.”

Some streamers only allow subscribers (known as “subs”) or followers to chat. For example, Grandmaster Daniel “Danya” Naroditsky limits his chat box to his subscribers. During Naroditsky’s 28-15 match win over 11th grade National Champion and International Master Hans Niemann, Naroditsky listed 727 subscribers, 558 current viewers, and over one million total views. Naroditsky also has 21,500 followers. His Moobot stated, “Subscribers get access to emotes, badges, and occasional games with Danya. Each and every subscription means a great deal to him!” 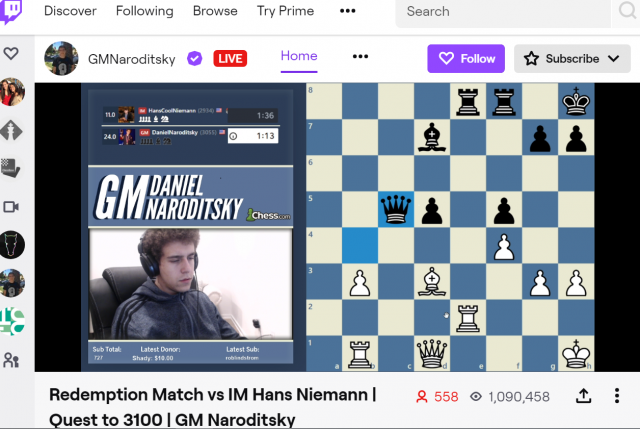 When I watched that match, from late on April 12 until the early morning hours of April 13, Naroditsky’s wins had pizzazz. See if you can find his final moves in these two positions.

If you aren’t ready to subscribe, there are less expensive and even free ways to support streamers. You can purchase Bits to “Cheer,” as a Twitch Affiliate or Twitch Partner gets one penny for each bit you spend in his or her channel. Following channels is free. When you follow a Twitch channel, you are notified each time its livestream begins. Since streamers advance to Twitch Affiliate and Twitch Partner partly based on how many people follow them, following is important. Viewing is free and also helps streamers. To become a Twitch Affiliate, a streamer must have 50 or more followers and average three (or more) concurrent viewers over the last thirty days. When you sign up for Twitch, you choose at least three channels to follow. One that I chose was the US Chess Federation’s official channel. Because I’m following, I get an email notification each time USChess goes live. On two different days of USChess livestreaming recently, FIDE Events Manager Chris Bird played in blitz tournaments on Chess.com. Bird reminded viewers that they can earn US Chess “online ratings.” While Bird’s US Chess regular rating, for over-the-board chess, is in the expert range, his current US Chess “Online Blitz Rating” is in the high 1700s. I asked Bird about this, and he explained that “I really don’t do well at blitz, although commentating and trying to watch what is going on while streaming certainly doesn’t help me play better, especially when I’m low on time.” When the USChess channel went live on the afternoon of April 16, it was hosting former U.S. Women’s chess champion Sabina Foisor. Woman Grandmaster Foisor entertained her 64 (a chess number!) viewers by challenging them to three-minute blitz. It was the second time I had ended up in Foisor’s channel via another channel. 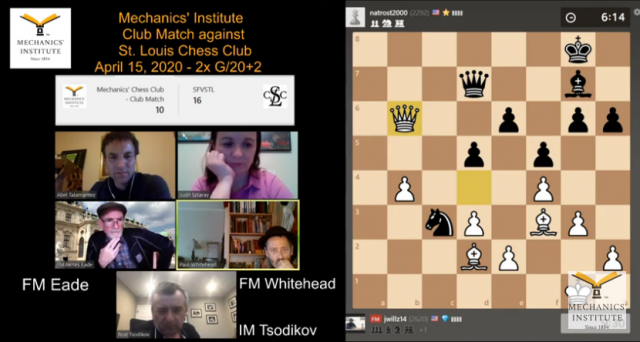 As a reminder, you can watch Twitch livestreams without signing up for Twitch. Once you have joined Twitch, and watched a few livestreams, you may decide to start your own Twitch channel. Twitch offers advice on everything for your stream. However, before streaming on Twitch, install Open Broadcaster Software (OBS) (free to download and use) on your computer. There are YouTube videos about setting"> up OBS and inserting"> the Chess.com board. 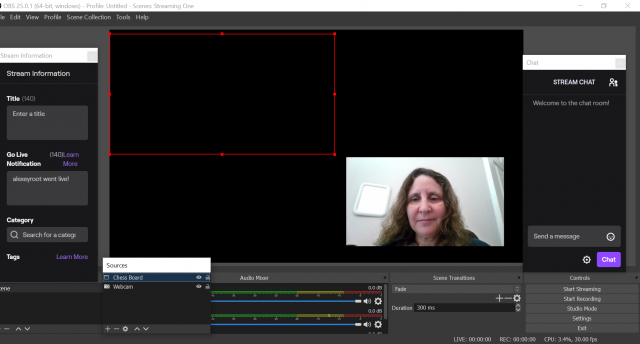 Getting my channel started was hard. In March, I joined Twitch to stream during the Isolated Queens tournament hosted on Chess.com. I followed the steps on the YouTube videos linked above. Yet I still could not get my Chess.com board to load on OBS, which connects to my Twitch channel. When I emailed Chess.com for help, I was advised to “turn off hardware acceleration in Chrome,” which worked. But then, when I began my stream, I got an audio echo. I closed all my windows to reboot OBS, not realizing that closing Chess.com’s Live Chess meant that I would not be paired for round 1. I did play the other rounds, and had fun, though I finished several points behind the tournament winners. I plan to watch others’ Twitch channels rather than broadcasting in my own. To give a television analogy, I’d rather watch television than start my own public-access show. My next Twitch livestream will likely be when I compete in the next Isolated Queens tournament, whenever that tournament happens. For the Isolated Queens tournament, streaming is required to be eligible for cash prizes. For the Premium Arena tournament, May 3 on Chess.com, streaming doubles your cash prizes.

Streaming for Fun and Profit

For those that overcome initial hurdles and stream regularly, Twitch can be fun and financially rewarding. One of the most famous chess streamers is Woman FIDE Master Alexandra Botez of BotezLive. Botez’s advice in an interview with NBC was to “just move on in and have some fun with it [chess streaming].” The results can be lucrative. According to one Quora answer, “Subscribing to someone on Twitch costs $4.99 per month [at Tier 1]. If you had 1,000 subscribers, in one month you would make $5,000. However, Twitch takes 50% of this revenue… if you’re a really big streamer you can negotiate better terms like 60/40.” Similar percentage split information is on this site, coupled with an analysis of International Master John Bartholomew’s Tier 1 subscriptions and International Master Anna Rudolf’s merchandise. Merchandise and other ways to monetize—such as donations, sponsorships, and ad revenue—can add to a streamer’s intake.

You Stream, I Stream, We All Stream

With ice cream trucks sidelined for the pandemic, you probably won’t hear “You Scream, I Scream, We All Scream for Ice Cream” this summer. But you might hear “You Stream, I Stream, We All Stream in Live Streams.” Streamers visit their friends’ streams (You Stream), stream individually (I Stream), and stream together (We All Stream), for example when Anna Rudolf joins BotezLive. There’s both competition and cooperation among chess streamers. At 1:15 a.m. on April 13, well into the second half of his 8 hour and 48 minute continuous livestream, Naroditsky revealed that competition on Twitch isn’t only about winning individual chess games. He exclaimed about the number of live viewers that BotezLive and chessbrah had, compared to his number of live viewers. Later, he said, “I want to outstream Botez and Eric,” referring to more continuous hours online than either BotezLive or chessbrah’s Grandmaster Eric Hansen. Naroditsky also mentioned “adoption,” a term which means winning 10 games in a row with no draws, in the same time control, against the same opponent. The most-watched chess streamer, U.S. Chess Champion Hikaru Nakamura, defines adoption and other terms in his Moobot command list.

In addition to cooperative acts, like hosting and the afore-mentioned raids. streamers give encouragement and compliments to each other. When following Grandmaster Dariusz Świercz, in the early morning hours of April 18, Grandmaster Ray Robson wrote, “U CAN DO IT” when Świercz paused on a puzzle. Świercz solved that particular puzzle and scored 40 on that 5-minute Puzzle Rush. More impressively, earlier in his two-hour-long Twitch livestream, Świercz scored 46 in 3-minute Puzzle Rush. During their match, Naroditsky favorably compared Niemann to both World Chess Champion Magnus Carlsen and the 2018 World Chess Championship Challenger Fabiano Caruana. During and after last game, which Niemann won, Naroditsky said Niemann was “crazy-strong, he’s a computer, he’s literally a god… 95% accuracy, the guy’s a monster.” Then Niemann raided Naroditsky’s stream with a party of 98. Niemann chatted to Naroditsky, “ggs [good games] have a good stream.” Viewing hours-long streams, like Naroditsky’s when he played Niemann, feels less like visiting Naroditsky’s home and more like moving into it. You even learn what to bring for food and drinks, should you ever visit in real life, since Naroditsky sometimes multi-tasks his chess and meals. This"> video shows which chess streamers have been popular over time and, as mentioned before, you can explore other chess channels on Twitch. Some awesome chess streamers might emerge during this pandemic; you could be among their founding subscribers. Or, you could be the newest Twitch chess streamer!