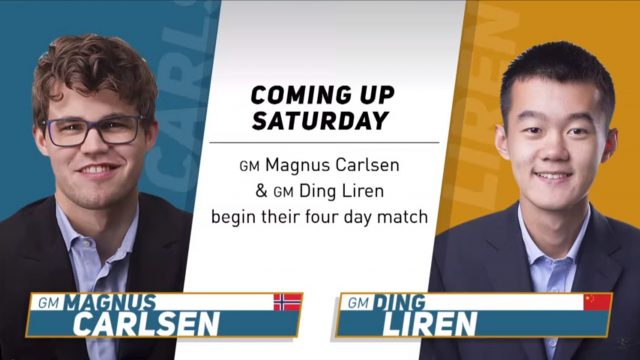 The Champions Showdown is a unique event, featuring many of the top players in the world (including Carlsen and all of the top 3 American players), an increasingly faster time control (Game 30, Game 20, Game 10, and, on the final day, Game 5), and the controversial choice of no increment or delay. The event also has a unique scoring system to give the longer games more value: 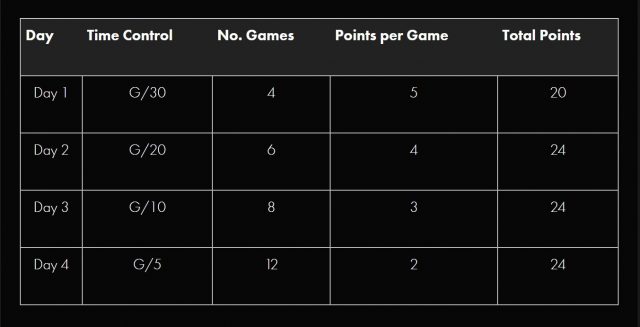 On Saturday, the much awaited Magnus Carlsen vs. Ding Liren match begins and features the same format of rapid and blitz games throughout four days. Here’s a recap on the event so far and puzzles from key tactical and positional moments in the games. 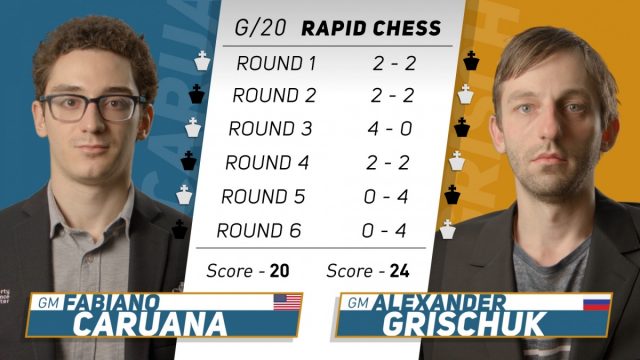 "I think it puts a lot of psychological pressure on the players from an early stage." -Fabiano Caruana's thoughts on the lack of increment/delay

Fabiano Caruana vs. Alexander Grischuk has been the closest so far with the score tied for the majority of the match. Caruana won the very first game of the match with an instructive rook maneuver:

What three move maneuver did Caruana use to greatly improve his position? Show Solution One of my favorite tactical moments was a missed opportunity in the game 30 time control.

Show Solution In the last round of the day, Grischuk pulled ahead in the match because of an unfortunate queen blunder by Caruana. 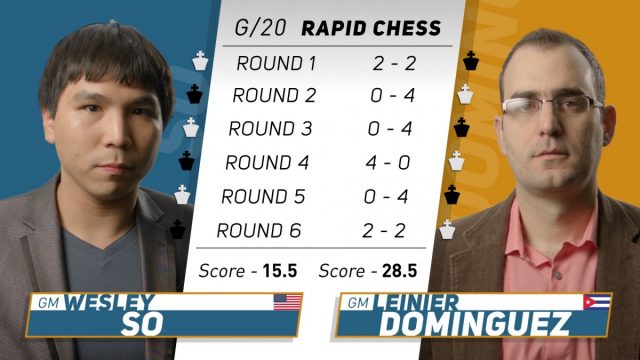 Despite being the favorite, Wesley So has had a difficult time so far in the match. At the finish of Day 1, So was one game behind (equivalent to 5 points), and, on Day 2, he trailed by 2 games (4 points each), leaving him 13 points behind. There are still 2 days and many games ahead: Can So manage an epic comeback?

Leinier Dominguez vs. Wesley So

Show Solution In one of the most eventful games of the event, So and Dominquez ended up in a nerve-wrecking time scramble in a nearly dead drawn rook endgame. So's flag fell just one second before Dominquez's. Matters became controversial because both players made several illegal moves with pieces landing on ambiguous squares and even two-handed moves. https://twitter.com/LennartOotes/status/929125193523527681 https://twitter.com/JohanSalomon/status/929118175366647815 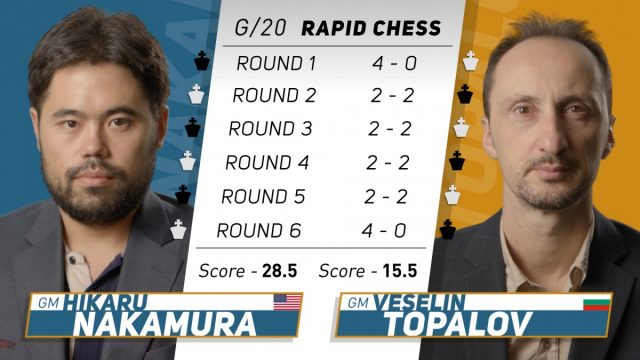 “Especially he’s very good at knowing when to sacrifice an exchange. If you look at all of the other top players, even if you combine them, I don’t think any of them have anywhere near the amount of victories with an exchange sacrifice as Veselin Topalov.” -Hikaru Nakamura on his Showdown opponent

Nakamura has taken a commanding lead in the match due to his resourceful defensive skills. Topalov achieved several winning positions today, but was unable to convert any of them into victories. In the last game of the day, although Nakamura found himself down a piece (for 2 pawns) in an endgame, he played actively and marched his king into the position to win. Here's the game finish: 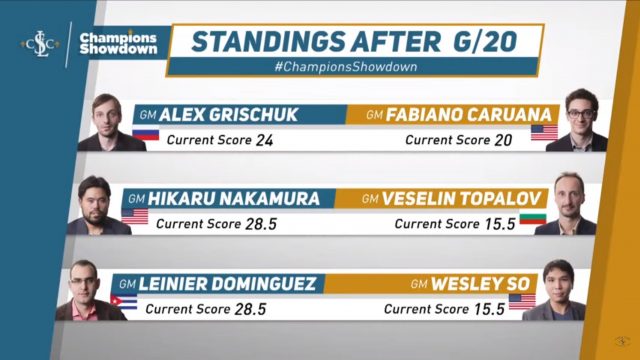 Watch the time controls get faster and the beginning of Magnus Carlsen vs. Ding Liren live on Saturday at 1 p.m. CST: https://www.uschesschamps.com/2017-champions-showdown/information/watch-live For more information, visit the Official Website.

The only value the ending of So-Dominguez has is to remind us why modern time control best practices are, in fact, best practices.