Caruana Hangs On To Candidates Lead 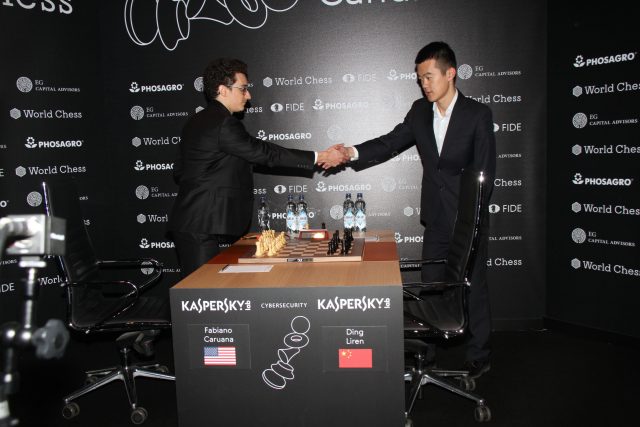 Caruana vs. Ding, Photo Cathy Rogers
The vernal equinox at the Candidates tournament in Berlin on Tuesday was accompanied by snow storms, ice cool defense and a meltdown. US Grandmaster Fabiano Caruana, has led the race to find Magnus Carlsen’s World Championship challenger since round four, but missed a golden opportunity to increase his half point lead in the ninth round when he was unable to stop Ding Liren’s drawing streak reaching nine games. [fen]3n4/r5pk/4P1N1/6RP/bp3K2/8/1B6/8 w - - 0 66[/fen] After more than six hours of hard work and 65 moves, the diagrammed position was reached, with both players believing that Black was in touching distance of a hard-earned draw. The game concluded 66.Re5 Be8 67.e7 and Caruana offered a draw, soon accepted. Caruana explained: “I missed 65...Nd8 and I could [be at] risk if I blunder a pawn, so I decided just to offer a draw. I was already dizzy with variations.” Exhaustion probably explains why both players looked at 66.Nf8+! Kg8 67.h6! but missed the simple idea 67...Kxf8 68.h7. [fen]3n1k2/r5pP/4P3/6R1/bp3K2/8/1B6/8 b - - 0 68[/fen] When told about the miss at the post-game press conference, Caruana gave a rueful smile and scratched his ear. Ding, who had been on the precipice of defeat for the last three hours but had stayed cool enough to survive, just smiled. With main rival Shakhriyar Mamedyarov also drawing, Caruana retained his slim half point lead with five rounds to play, with the next two games critical for Caruana. On Thursday the American will sit down against Mamedyarov with Black, knowing that a win would almost wrap up the tournament but any other result would leave the race wide open. The next round Caruana will have to face, to use Boris Spassky’s phrase (describing English GM Will Watson), a drunken machine gunner, who could blow Caruana or himself away with equal likelihood. The drunken machine gunner is, to the consternation of players and pundits alike, former World Champion Vladimir Kramnik. 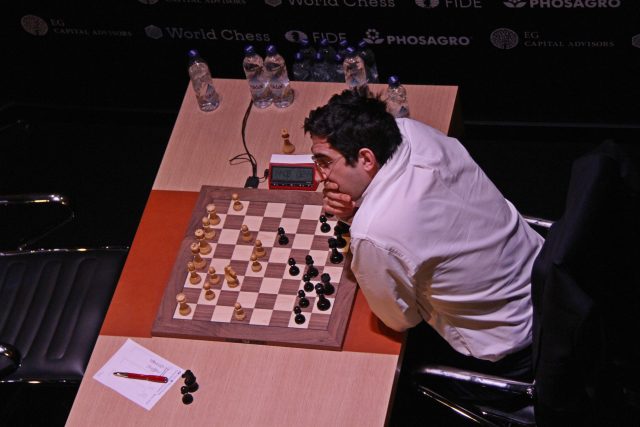 Kramnik, Photo Cathy Rogers
Just over a week ago, the Candidates’ oldest player – who qualified for the event via a controversial wild card – was confounding expectations. Kramnik led the tournament outright after three rounds, his third game being a memorable demolition of pre-tournament favorite Levon Aronian. Kramnik then had Caruana on toast in the fourth round before a collapse in the sixth hour of play saw Kramnik slumped over the board in despair and headed for his first loss. Kramnik’s reaction was that of the disappointed gambler; attempting to regain his losses at all costs. In game after game Kramnik pushed his position to the limit and beyond, playing for five and a half hours in five consecutive games. From rounds five to eight, Kramnik insisted in pushing for a win in equal positions and was twice punished for taking too many risks. In round nine Kramnik turned up and, perhaps provoked by a hyper-aggressive Sergey Karjakin novelty sacrificed half his army until the following position was reached. [fen]7k/p5p1/2pb3p/3b3P/6q1/5RBR/P5K1/3Q4 b - - 0 32[/fen] In a fantasy universe, White, two rooks for a bishop ahead, would be so tied up that he would be helpless and Black’s c pawn would eventually advance down the board triumphantly. However instead of the game being spoken of in the hushed tones reserved for another game with the same material imbalance, Gufeld-Kavalek, 1962, there was no escape from reality for Kramnik. To compound the fears about Kramnik’s objectivity, after the rounds 5-8 games the Russian gave a series of bizarre press conferences with his opponents after the games and each time claimed that he was better/winning for the bulk of the struggle. Kramnik would justify his opinions with variations that were frequently unsound. His opponents mostly preferred to stay silent rather than offend a former World Champion, though some could not hide their amusement at Kramnik’s irrationality. Kramnik did not attend the press conference after his loss to Karjakin, his fourth defeat in six rounds. However this was not entirely Kramnik’s fault since he had turned up in the Fan Zone for the press conference only to find that Aronian and Mamedyarov, who finished a short time after Kramnik and Karjakin, had zipped in and taken their seats in front of the television cameras. Kramnik stayed around for a few minutes signing autographs before gathering up his coat and leaving, none too happy on multiple fronts. Before the tournament Kramnik, 42, said that this would probably be his final tilt for the world title so he would no doubt be more than pleased to go out with a tournament-deciding victory over the leader, as Ivanchuk did to him in the final round of the 2013 Candidates tournament. The second US player, Wesley So, is running equal with Aronian and Kramnik after the ninth round – a position he would probably have settled for at the start of the tournament. Unfortunately the three stars are currently chasing the wooden spoon though So was still talking – not altogether seriously - about the possibility of winning his last five games at the press conference after his quiet draw against Alexander Grischuk. In the eighth round the two US players had met, with So needing to  recall an ‘injustice pattern’ from a classic American game to hold a difficult endgame. [fen]8/8/8/8/2k3KN/3r2p1/1P6/8 w - - 0 58[/fen] In the diagrammed position So played 58.b4!, knowing that after 58...Kxb4 (not played by Caruana, so the b pawn just kept running) the players will have reached a mirror image of an Emanuel Lasker versus Edward Lasker game from New York 1924. That game featured prominently in Ed Lasker’s Chess for Fun and Chess for Blood, with Lasker explaining how he was completely convinced that such an endgame with R+P v N must be winning – except it wasn’t. 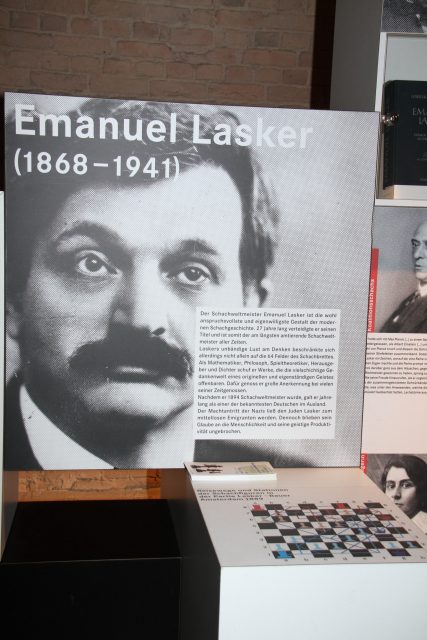 Photo Cathy Rogers
As mentioned in the first report, the 150th anniversary of Emanuel Lasker’s birth is being commemorated by a small exhibition on the ground floor of the Kühlhaus – a step forward for Germany’s Lasker Society who were refused permission by organizers Agon to put on a more extensive exhibition when Berlin hosted the World Rapid and Blitz Championships in 2015. Organizer Agon’s determination to go it alone has not only resulted in there being, for example, no bookstall and a very limited number of chess boards in the Fan Zone despite offers to provide them, but has even frustrated the manager of the Kühlhaus who fears that the multiple criticisms of the tournament venue will affect the Kühlhaus’ reputation as an event host. The manager pointed out that many of the problems identified in the early days of the Candidates Tournament – from insufficient and inadequate toilets for the players, to noisy doors, to darkness in the press room – could have been solved in advance of causing a public outcry had the venue management been consulted early. With a ten year contract from the world body FIDE to run World Championship events now in its fifth year, one would have hoped that Agon would improve from event to event but, as anyone who tried to register to watch the official paid broadcast for the 2018 Candidates would have discovered, it is one step forward, two steps back. One conversation heard in the press room between a journalist and Agon head Ilya Merenzon epitomizes the problem. “What do you think of the venue?” Merenzon asked the journalist, clearly expecting praise for his choice of the trendy Kühlhaus. “Terrible,” came the honest reply. “Why do you say that?” “Well, look around,” replied the journalist, trying not to shiver from the cold and waving his hands towards the concrete floor and roof, the wires hanging out of the walls, the dismal light and the general grunge. “But that’s just like my apartment in New York!” responded Merenzon. “And that was very expensive,” he added ending the debate. 2018 Candidates Tournament Scores after round 9: 1.Caruana(USA) 6; 2.Mamedyarov(AZE) 5.5; 3.Grischuk(RUS) 5; =4.Ding(CHN),Karjakin(RUS) 4.5; =6.So(USA), Aronian(ARM), Kramnik(RUS) 3.5. The Candidates Tournament continues on Thursday with round 10 starting at 10am AEST. This is Ian Rogers’ final report from Berlin. The next update from Berlin of Caruana’s battle to become the world title challenger will come from Dylan Quercia.
SHARE: