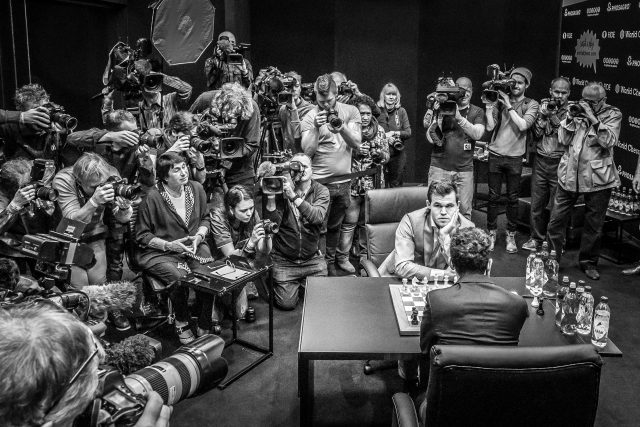 Magnus Carlsen, World Champion, Photo IM Eric Rosen
Magnus Carlsen retained his World Championship title in a stunning rapid display, defeating American challenger Fabiano Caruana 3-0. Post-game, Magnus had only kind words for his opponent, singling him out as his toughest opponent yet in his fourth title victory and third successful title defense. On the other hand, Magnus was not as generous with critics of his controversial round 12 draw offer, including former World Champions Garry Kasparov and Vladimir Kramnik, who both harshly criticized Carlsen's decision to offer a draw in a better position in the final classical game of the match. https://twitter.com/agadmator/status/1067854110400094209 And still, Magnus Carlsen urged fans not to be results oriented. While his tiebreak victory was fully convincing, he couldn't have predicted three wins in a row considering Caruana's incredibly high quality chess in the classical portion of the match. Fabiano was classy and cool even after an extremely tough day at the office. https://twitter.com/FabianoCaruana/status/1067848751052668928 Fabiano Caruana's sensational performance throughout 2018, in the Candidates and finally in this match, inspired people all over the nation and the World to delve more deeply into chess. As we watched two of the greatest players in history battle, we saw some of the most accurate games in World Championship history. US Chess Executive Director Carol Meyer said, "Fabiano's quest for the crown has been such a boon for the popularity of chess and we are so proud of his performance in London." Rex Sinquefield, founder of the Saint Louis Chess Club, echoed the positive sentiment, "“We are tremendously proud of Fabiano,” said Rex, “He has been instrumental in capturing the world’s attention and fostering renewed interest in American chess." Fabiano's many fans, longtime and newfound, flooded twitter to express their best wishes for our challenger. https://twitter.com/GM_Hess/status/1067852590040272896 https://twitter.com/Tatev__A/status/1067829881050882048 https://twitter.com/JenShahade/status/1067866852439789569 https://twitter.com/olimpiuurcan/status/1067833099726151680 https://twitter.com/cnnsport/status/1067873362008055811 https://twitter.com/Alisa_Melekhina/status/1067859373656076288 And on to the most painful part of the day for #TeamFabi, Magnus's dazzling display in the rapid performance, with all three wins annotated by IM Kostya Kavutskiy. US Chess congratulates Fabiano Caruana on this epic fight. Thanks to IM Eric Rosen for his social media coverage throughout the event, and IM Kostya Kavutskiy for his annotations in the second half of the event. Connect with Eric on his website and twitter, and find out more about Kostya on his twitter and patreon pages.
SHARE: