Twelfth Draw in London Sends Carlsen-Caruana to Playoffs on Wednesday 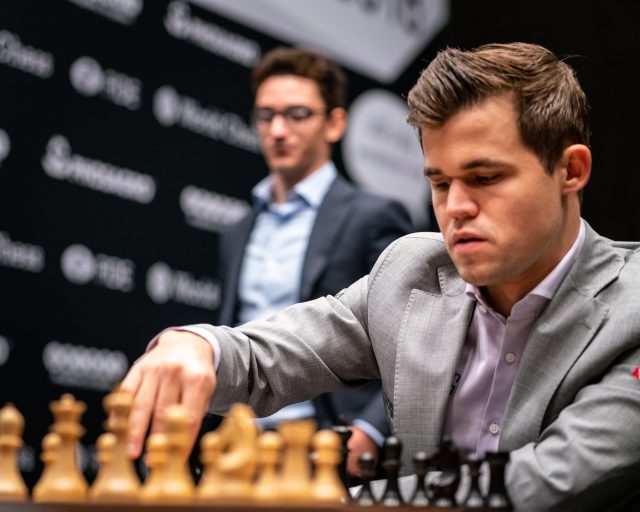 The final classical game in London was drawn, Photo IM Eric Rosen
The twelfth straight draw at the Magnus Carlsen-Fabiano Caruana match in London will send the top two chess players in the World into a rapid tiebreak for the World Championship title. The four game rapid match, followed by blitz  and finally, Armageddon if needed, is set for Wednesday, November 28th (10 AM ET). Chess fans braced themselves for anti-climax as Fabiano Caruana was surprised in the Open Sicilian, Sveshnikov Variation. In the previous two Open Sicilians, Fabiano played quickly and confidently, but this time, he quickly got under time pressure after Carlsen's new wrinkle, ....h5. There was a chance the game could end in repetition long before move 30, though Garry Kasparov later said that he was fully confident Caruana would not acquiesce to a draw. https://twitter.com/USChess/status/1067076546366722048 Caruana was not immediately rewarded for valiantly fighting on. Instead, the American challenger found himself under pressure on the board on the clock. https://twitter.com/USChess/status/1067107913246875648 And then, to the shock of the chess world, Carlsen offered a draw on move 31. https://twitter.com/Kasparov63/status/1067125702712004609 https://twitter.com/USChess/status/1067130049432825863 IM Kostya Kavutskiy annotates the games, and offers his thoughts on the most controversial draw of the match. https://twitter.com/USChess/status/1067131731713642498 Interact with Eric Rosen, who is taking over our twitter@USChess using the hashtag #CarlsenCaruana.  Worldchess.com is the tournament website.   IM Kostya Kavutskiy is a professional chess player, coach, and writer. Check out his twitter and Patreon page for instructive chess analysis and advice for improvement.
SHARE: