Carlsen Prevails at the London Classic 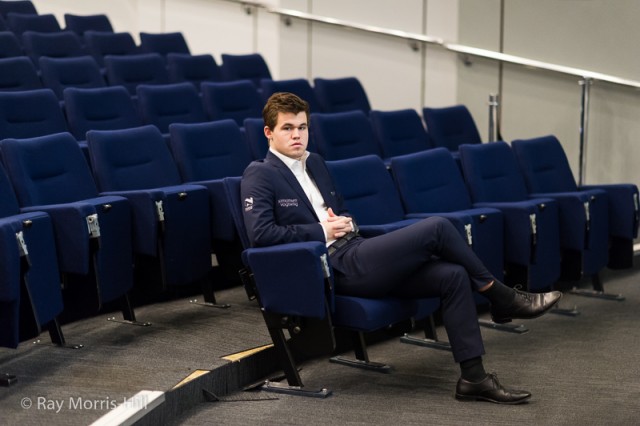 Magnus Carlsen before winning the London Chess Classic and Grand Chess Tour, Photo Ray Morris-Hill
It’s hard to imagine a player as strong as Magnus Carlsen in a slump. Yet, a portion of 2015 was very turbulent for the World Champion: This brings us to London Classic, the final event of the Grand Chess Tour and one of the last events of the year. Nearing the end of the tournament, although undefeated, Carlsen seemed to be far from ideal form. He missed several opportunities in previous rounds, and his rating continued to trickle downwards. Despite this, Carlsen managed to come through and win, not only the London Classic, but the entire Grand Chess Tour. His nearly seven hour, hard-fought victory against Nakamura shows his incredible fighting spirit. Leading into the last round, Carlsen was half a point behind the tournament leaders. Only a victory would tie him for first and get him into the playoff for the title. Grischuk came ready for a battle, playing the wild Sicilian variation that Veselin Topalov used as a surprise weapon against Carlsen at the Sinquefield Cup. In the first game of the rapid final playoff, Carlsen pushed for the win until the very end, even with only seconds left on his clock. "When it was needed, Magnus came through." -Grand Chess Tour commentator, GM Yasser Seirawan. Carlsen described his own performance as: "good and lucky enough". Two other competitors who played excellently are Anish Giri and Maxime Vachier-Lagrave. In addition to tying for 1st in the London Classic, Giri finished 2nd in the Grand Chess Tour and was the only participant to go undefeated in all three events.

Giri's comment after his game against Nakamura was: “If you try to use your imagination, it reminds me of a fight between a little angry pussy cat against a wounded lion.” What was Giri’s final winning move?

Show Solution
43. f4! Black resigns. If 43…Rc5 44. Qg6+ wins the bishop.
Vachier-Lagrave tied for 1st in the tournament and defeated Giri in the semi-final playoff. According to Grand Chess Tour commentator, GM Maurice Ashley, Vachier-Lagrave "played the best chess of the tournament”.

In time trouble, while defending a tense pawn down endgame, Giri made the fatal mistake of 59. Rh8?? What did Vachier-Lagrave play to force immediate resignation?

Show Solution
59…Rxe5 White resigns. After 60. Kxe5 Ng6+ 61. Kd5 Nxh8 62. Kxc5 g3 it’s all over.
One consistent feature throughout the tournament was Grischuk’s classic time trouble: "Grischuk has had an outsized effect on this tournament all because of his plague of time pressure." -GM Maurice Ashley https://twitter.com/GrandChessTour/status/673539893465735168 https://twitter.com/nigelshortchess/status/673920531566084096 https://twitter.com/GrandChessTour/status/673921920635547648 This led to numerous time scrambles, which had both disastrous and miraculous results. His time trouble often encouraged his opponents to play quickly also, trying to run his clock down. This created unusual opportunities for both sides. In round 8, Grischuk had just over a minute left while his opponent, Levon Aronian, had over 30 minutes. Additionally, Aronian’s position was better. However, Aronian began blitzing moves out along with Grischuk. What saving resource did the World Blitz Champion find in the nick of time?

Here are the qualifiers for the 2016 Grand Chess Tour. 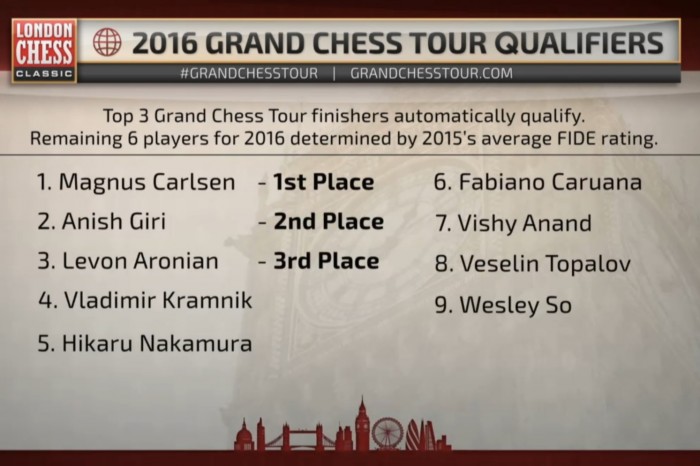