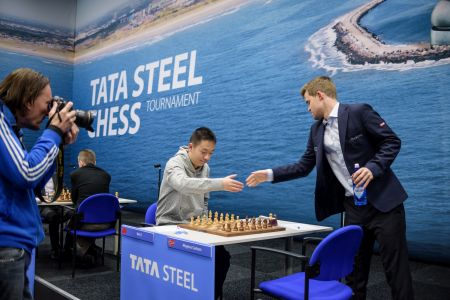 Wei Yi and Magnus Carlsen shake hands, Photo official website.
Tournament cross tables can be deceptive, giving the impression that each round is of equal importance. Anyone who's been immersed in a competitive event knows that circumstances can make one game immensely more valuable than another. A game between the top seed and a new prodigy can serve as a glimpse into the future. A victory at a key moment can give one a tournament lead. A match between long time rivals can settle their score once and for all. A brilliancy prize worthy game can be remembered and replayed long after the final prizes have been taken home. Let's take a look at some of the most notable games so far.

Wei Yi is a 16-year-old prodigy whose improvement trajectory has nearly mirrored Magnus Carlsen's. Each time Wei reaches a new milestone in his chess career, a myriad of articles are released, comparing his achievements to Carlsen's at the same age. Let's take a look at some of the stats. 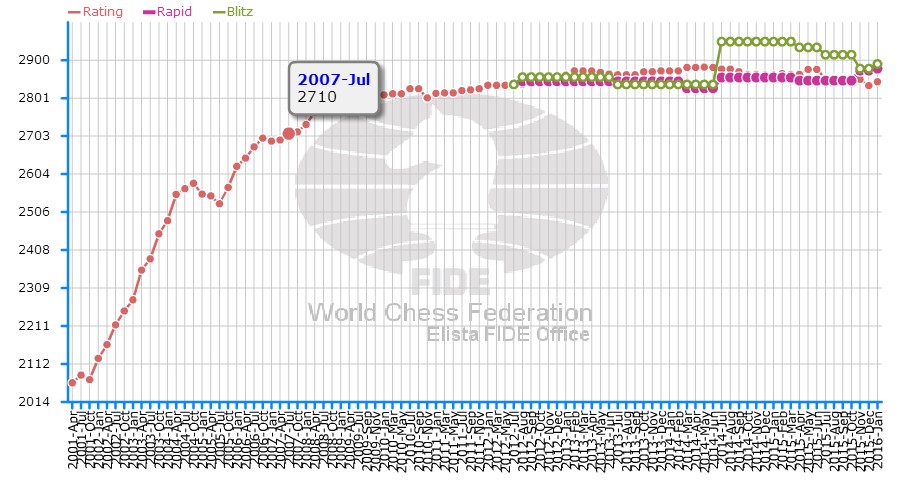 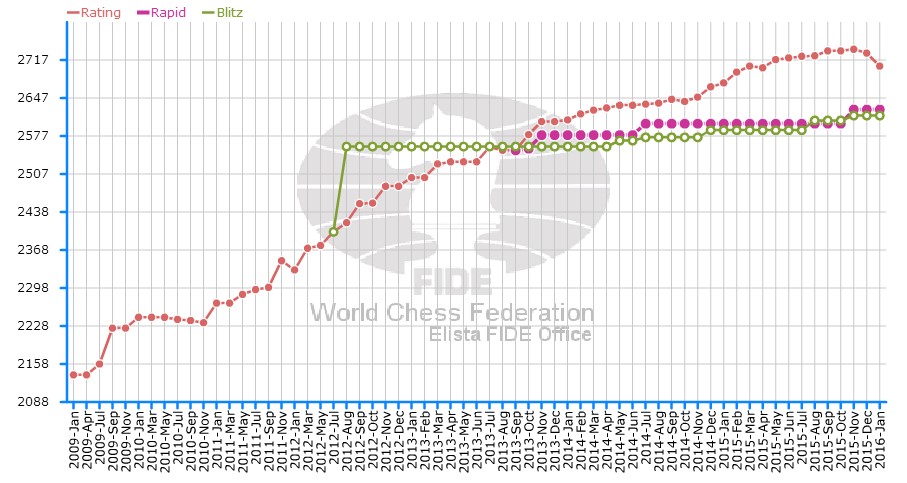 The two phenomenal talents have even been compared in unusual aspects: https://twitter.com/OlimpiuUrcan/status/689078604555223040

On the left, Carlsen wears a hoodie while facing Kasparov for the first time.

On the right, Wei Yi wears a hoodie as he faces Carlsen for the first time.

"How far can Wei Yi go? Will he soon be a threat to the World Champion?"

Naturally, the first game ever between the two has been one of the most anticipated games of the tournament.

"Round three features a very eagerly awaited matchup between Wei Yi, the Chinese superstar and perhaps heir of Magnus Carlsen, as he plays today against Magnus Carlsen."

The question remained: how would Wei Yi fare in a head-to-head game against the world champion?

Wei opened with the Ruy Lopez, and Carlsen countered with the Marshall Gambit, which Wei had never faced before in a tournament game. The game followed theory for a long time. Eventually, a rook endgame with a slight advantage for Carlsen occurred.

Against any other opponent, the winning chances would be considered minimal. However, Carlsen, referred to as "The Terrifying Grinder of Chess" by Grandmaster Daniel Naroditsky, makes a habit out of exploiting small advantages in seemingly innocuous positions.

Throughout his career, Magnus has demonstrated a unique ability to apply immense pressure in objectively equal positions.

Would Wei Yi succumb to the pressure or would he be able to match Carlsen's technical precision?

How did Wei prevent Carlsen from slowly grinding his superior position to a victory?

Considering the tremendous achievements of these players, the games between these two are often considered a prequel to a future world championship match.

Carlsen began with the unusual first move, 1. g3. Both players were in a fighting mood, creating complications and refusing to castle their kings the entire game. In the middlegame, Caruana uncorked 20...Ne5!? (View below). The double-edged game ended with a perpetual check against Carlsen's open king.

Caruana shares his thoughts in the post-game interview: [youtube

This crucial victory in round 7 allowed Caruana to keep up the pace with Carlsen (who won quickly against Pavel Elijanov) in the race for first place, heading into the second half of the tournament. Additionally, it eliminated one of the top contenders, Ding Liren, from the tie for the lead. Can you find the behind-the-scenes tactic that allowed Caruana to secure an extra pawn?

In the game, Ding played 20...Rb5, sacrificing the c4 pawn in an attempt for activity. What tactic was waiting for him if he played 20...Rc8?

There is a potential fork in the position: Use a combination to make it work.

Matchup #4: Wesley So vs. Anish Giri

Wesley So defeated Anish Giri (ranked #3 in the world ) in the first round. This is the first game Giri has lost in classical chess in a very long time. The win tied So for the tournament lead at the time.

Hou Yifan played a brilliant game, demonstrating her understanding of both the initiative and positional chess, against David Navara.

How did Hou increase her positional advantage?

"The aim of all maneuvers on an open file is the ultimate intrusion along this file... into the enemy position." -Aron Nimzovich
Show Solution

How did Hou turn her inactive knight on b3 into the game-winning piece?

Knights belong on outposts. White uses a four move maneuver to bring her knight to a critical kingside outpost.

In Wijk aan Zee, the grandmasters compete in more than just chess. [youtube 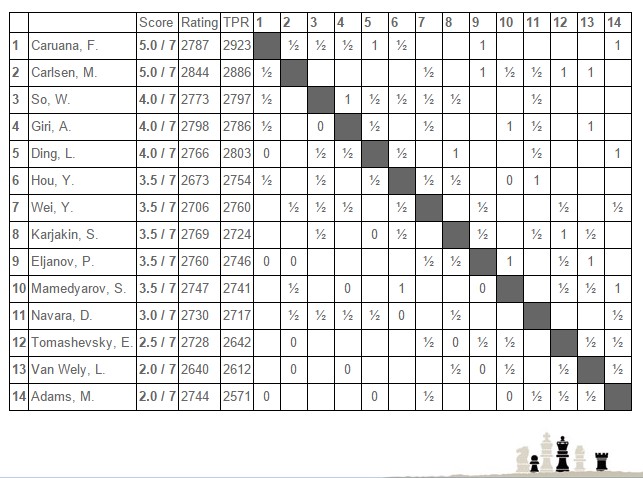