“You’ll never see a chess player with dementia.” This is an old saying among chess players ‘of a certain age,’ and while it is certainly false, it turns out that the link between “cognitive stimulation” and protection against brain-aging diseases may have some factual basis. 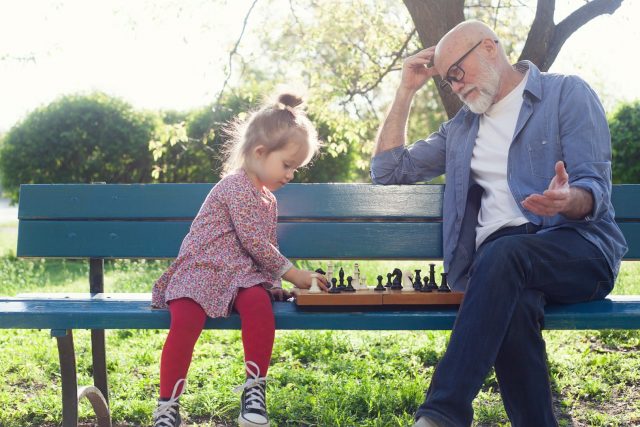 debasige / Shutterstock.com
The Washington Post reported this week that researchers from the Rush University Medical Center (Chicago, IL) presented a study at this year’s Alzheimer’s Association International meeting, where they said that:

… combining five lifestyle habits — including eating healthier, exercising regularly and refraining from smoking — can reduce the risk of Alzheimer’s by 60 percent. A separate study showed that lifestyle choices can lower risk even for those who are genetically prelifestyle disposed to the disease.

The study authors tracked five lifestyle markers for the 2,765 study participants over a 10 year period: diet, exercise, smoking habits, alcohol consumption, and “engagement in cognitive stimulation activities.” Participants who engaged in healthy versions of at least four of the behaviors listed above were 60% less likely to develop Alzheimer’s, compared to study participants who ticked none or one of the five boxes. Another study, this one from the University of Exeter, found that even those with a genetic disposition to dementia could mitigate some of their risk by living healthy lifestyles. So keep playing chess, CLO readers! Not only is it fun, but it might actually be good for your brain health too.
SHARE:

You won't get dementia playing chess....you'll just come down with paranoid schizophrenia (or something similar) ala B-Fischer & P-Morphy!
Not many people play like Fisher or Morphy
WORLD CHESS FEDERATION TRAINER MICHAEL CIAMARRA OF BIRMINGHAM ALABAMA DID MASSIVE worldwide ARTICLES ON TEACHING CHESS TO VETERANS IN ALABAMA ..LOCATED IN CHESSBASE NEWS ARCHIVES. Ciamarra is certain chess helps tremendously in many cases and keeos one interested in living. I call chess mind candy. Chess really has mind boggling random backstreets both at the chessboard and snap crackle and pop avenues away from it. Jude Acers/ New Orleans
You must wake your mind to its highest capability to compete in chess. Exercise your mind, or otherwise it will atrophy just like a muscle. Watching TV does not qualify.
Teaching chess in both VA locations out this way was educational for me. At the VA for physical trauma, my program never really took off. At the VA for mental trauma, my program was one of the more rewarding experiences of my life. My impression was that they were reassured that, if they could play chess, their minds must still be working.
James Eade, thanks for your comment, I am a retired Army Officer now living near Punta Gorda, FL how/who did you contact in the VA for starting such a program? please email me direct 1uplifts@gmail.com.