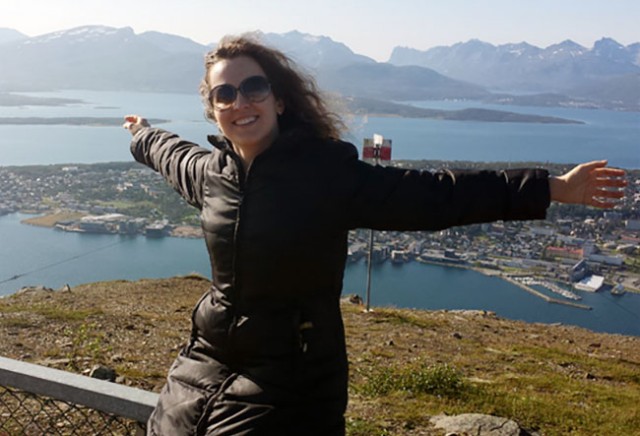 The #5 article in Best of CLO 2015 is Krush on K-12: “No Offense, but GMs Aren’t Good at Bughouse”  By GM Irina Krush. Judges enjoyed her storytelling, writing style and ability to show the joy of scholastic chess through one superstar's passion for bughouse. Max was having a good time with the bughouse; bantering with me and the other players came naturally to him. He was competitive, but if his team happened to lose, didn’t make a fuss over it. And it was clear to me he wasn’t intimidated by playing a GM (well, maybe that’s because it was bughouse and as he informed me in a good- natured, stating the facts kind of way ,“no offense, but GM’s just aren’t good at bughouse.”). More often, I see kids groan when they have to face a stronger player, instead of being excited at the opportunity. I would say that, if you’re looking to make your way up in chess, it’s important to replace fear with confidence. I got the feeling that Max simply enjoyed playing and didn’t care who was sitting in front of him, and that is definitely the best approach to any game you go into. 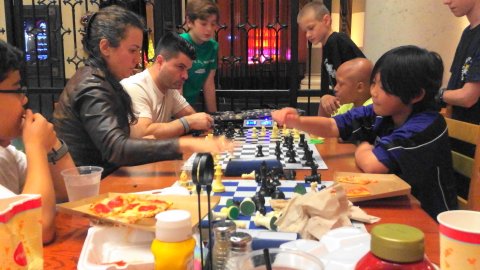 GM Irina Krush is a six-time US Women's Chess Champion. A frequent contributor to Chess Life Magazine and uschess.org, she also won Best of US Chess honors in 2013 for her article on earning her final GM norm in Baku. Her next writing for uschess will be from the Gibraltar Open, which just started.  Max Lu became a chess master 28 days shy of his tenth birthday, thereby breaking Awonder Liang's record for the youngest master in US Chess history. The Judges Sound Off Irina is a natural storyteller and I always enjoy her writing. She focuses this article on a few select winners in the K-12 National Championships--interestingly, each champion’s story contains themes of a healthy competitive mindset and fantastic sportsmanship, (either through helpful parental support, wise coaching, or both). Not only is the story of Max Lu and his father compelling, it shows the ideal relationship between the ‘chessplayer and the parent’ and teaches a valuable lesson: chess is important, but you should never lose sight of the joy of playing.- Kostya Kavutskiy As a chess parent, I'm naturally inclined to sympathize with tournament reports that make mention of a large number of players, in particular all of the section winners.  But Krush's piece makes a strong case for her approach:  finding the best angle and running with it.  Even setting aside her GM expertise, I think the author made a wise choice in looking at the K-12 Grade Nationals from a human-interest perspective.  (OK, I also think Max Lu deserves more press than he has received thus far.) - Kele Perkins 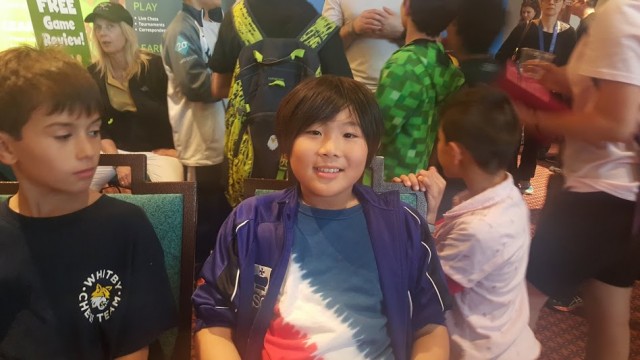 Max Lu at the K-12 Championships
The title drew me in immediately. After reading the article and realizing it was a quote from a child chess player, I found the article that much more meaningful.  I love how Krush eloquently articulates the child and parent’s perspective of a Nationals tournament scene instead of focusing only on the results of the games.  She is able to convey the passion that kids have for the chess environment and the camaraderie experienced among the players.   She also communicates how bughouse allows for kids to blow off steam after a grueling tournament. - Jennifer Vallens The report on the National Grade Level (K-12) in Orlando highlighted the unique experiences of a several champions and their parents.  GM Irina Krush focused on the competitive traits that true champs all share: confidence, concentration and resilience. Alas, at the end of the long weekend, the father of young master Max Lu got it right: scholastic chess was meant to be fun!- Michael "f-pawn" Aigner Best of CLO 2015 Countdown  #5-  “No Offense, but GMs Aren’t Good at Bughouse”  By GM Irina Krush #6-Eric Rosen on his Final IM Norm by IM Eric Rosen (Judging article)  #7 – Samir Sen on the US Chess School by Samir Sen (Judging article) #8-Why is Carlsen Dominant? (A Theory) by Cristian Chirila (Judging article)  #9- Shabalov Completes Quest at U.S. Open by FM Mike Klein (Judging article)  #10- The View From the Other End of the Playing Hall by Ben Silva (Judging article)
SHARE: