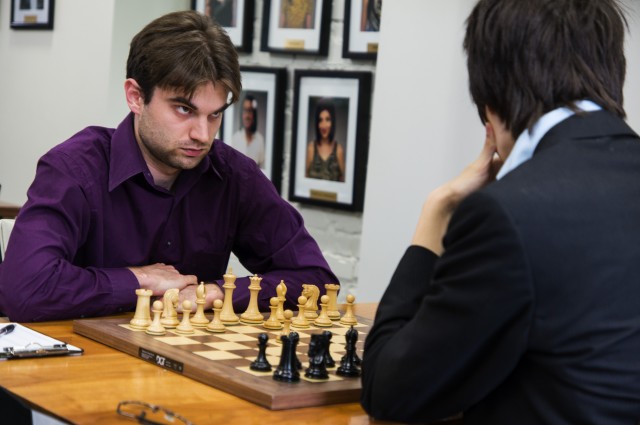 GM Sam Shankland at the Saint Louis Chess Club
The #1 article in Best of US Chess 2015 is Shankland on His Rise from GM to Top Hundred (in two parts) by GM Sam Shankland. Judges praised the emotional honesty and insightful self-critiques of the inspiring young American GM. I am American born and raised, there is no chess culture in my family, I played my first tournament at an age when most top talents are already masters, I never had more than one hour of coaching per week, I went through the full American K-12 education system in the traditional timetable, and I completed a four year degree from a highly ranked university. Yet in spite of all this, I have been able to consistently improve my chess, and I have recently reached a new milestone- a spot comfortably within the top hundred players in the world at 2661 FIDE. All throughout my career, many players of all levels have asked me how I am able to keep improving, and this article will serve as an overview of one leg of the journey. Shankland also won Best of CLO article #2 in 2014, for his piece on the Continental Championships in Brazil. Find Sam on his official website, his facebook page and follow him on twitter. The Judges Sound Off Sam really digs deep in this piece and holds absolutely nothing back. He combines his most memorable victories with his most painful slips in recent years to produce one of the most instructive articles on chess I’ve ever read. It’s rare to see such specificity and self-criticism from a Top 100 player like Sam, who offers immensely honest insight and sets a high example for ambitious players everywhere.- Kostya Kavutskiy This piece has it all -- insight, instruction, and inspiration.  Shankland's best quality is his objectivity, which includes a willingness to self-criticize.  Of course, we expect this quality to continue bringing him rewards over the board, but it adds value to his writing as well.  I'm not really qualified to judge his analysis, but I still learned a good deal about the kinds of improvements GMs make as they approach 2700 FIDE.- Kele Perkins I enjoyed reading about Sam’s reflections of his personal chess journey.  He makes some very relatable points and I think hearing from a GM that “improvement is highly non-linear” is valuable to those who find they are at a plateau.  He provides some very solid advice especially that someone is never too good to ask their opponent what mistakes were made in a game.  He provided varied games with highly instructive notes.-Jennifer Vallens GM Sam Shankland exposed the weaknesses in his own games and discussed how he overcame these hurdles. While most readers do not entertain serious chances to join the world's Top 100, the advice presented may benefit masters and strong amateurs alike. The principal value of this article (both Part I and II) lies in the annotated games, each chosen to illustrate a salient teaching point. Indeed, the author first explains the objective, and then goes to the chessboard to drive it home. At the end, the Grandmaster emphasizes that learning never stops, and submits a few examples from his own disappointments.- Michael Aigner An honest, open explanation of his efforts- Alex Dunne Best of CLO 2015 Countdown  #1-Shankland on His Rise from GM to Top Hundred (in two parts) by GM Sam Shankland #2- How Blitz Helps me Heal: Chess and Parkinson’s by Thierry Kauffmann (Judging article) #3- 10 Lessons Learned from the 2015 Sinquefield Cup by GM Ian Rogers (Judging article) #4- Four Medals in Greece: “This is real chess by GM Alejandro Ramirez #5-  “No Offense, but GMs Aren’t Good at Bughouse”  By GM Irina Krush (Judging article)  #6-Eric Rosen on his Final IM Norm by IM Eric Rosen (Judging article)  #7 – Samir Sen on the US Chess School by Samir Sen (Judging article) #8-Why is Carlsen Dominant? (A Theory) by Cristian Chirila (Judging article)  #9- Shabalov Completes Quest at U.S. Open by FM Mike Klein (Judging article)  #10- The View From the Other End of the Playing Hall by Ben Silva (Judging article)
SHARE:

[…]  Shankland was a gold medalist at the Olympiad in 2014. Last year, he placed third in the Tata Steel Challengers with a performance rating over 2700. He also broke into the top 100 in the world in 2015 and wrote about the experience in his Best of US Chess article, “Shankland on His Rise from GM to Top Hundred: Part I and II”. […]
[…] Chess, we countdown the top ten uschess.org articles of 2016, some of which you may have missed.  Find last year’s contest results and the winning 2015 article by GM Sam Shankland. Look for the countdown starting tomorrow. And […]