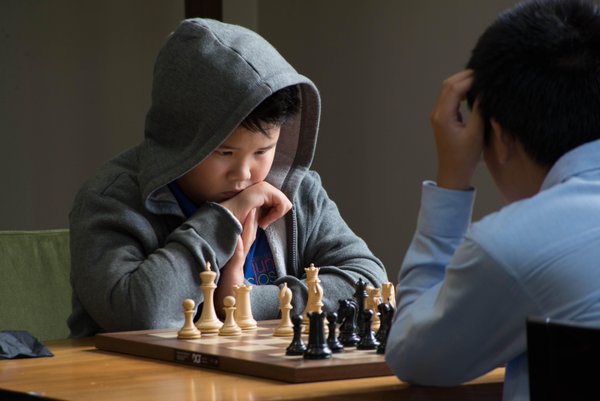 Chess is a game that is full of maxims.  We all know the ones about developing our pieces and getting our kings to safety.  One which rings just as true is that in chess, records are made to be broken. On November 25th, 2015 12 year old Awonder Liang of Madison, WI did just that when he scored his third and final IM norm at the UT Dallas Fall FIDE Open.  Earlier in the year he had crossed over the 2400 FIDE rating barrier when he won the US Junior Open. Awonder’s progress in chess has been nothing less than meteoric.  Since bursting on the scene a little over seven years ago with his first provisional rating of 577 he has set record after record.  Youngest ever expert; youngest ever master; youngest American to defeat an IM; youngest to defeat a GM, and now youngest American to earn the IM title.  Not to mention becoming a two time world champion along the way by capturing the Under 8 title in Brazil, 2011, and the U 10 title in UAE 2013. The prior record holder for youngest American IM, Sam Sevian, earned the title at the age of 12 years, 10 months, and 16 days.  Awonder now sets the new record at 12 years, 7 months, and 16 days, surpassing Sevian by a full three months.  Impressively Awonder could have earned the title several months earlier, but he narrowly missed a norm at the Chicago Open this past Spring. Immediately after earning his IM title Awonder chose to play in the Dallas Chess Club FIDE Open where he scored 5-2 and raised his USCF rating to an impressive 2500.  At this event Awonder beat one GM while drawing two others.  Over his last 15 games with grandmasters Awonder has scored 50%.  Awonder’s accomplishment also shines when you compare it to current world champion Magnus Carlsen as Awonder has beaten Magnus to the title by nine days! I had a chance to chat with Awonder over email about his accomplishments and future goals. Chris: How do you feel about setting the record and becoming the youngest US IM ever? Awonder: I felt very happy after I achieved my last IM norm.  It was a liberating feeling, as my first norm was about 1 ½ years ago.  So I’ve been working on the IM title for quite a long time. CW: Are you excited that you became an IM at a younger age than Magnus Carlsen?  AL: I obtained two IM norms before my 12th birthday.  GM Carlsen did not get any IM norms before that age.  Also I could have and should have got my third and final IM norm long time ago.  For instance, I missed my last IM norm at the Chicago Open in May 2015 by 0.4 performance point, and I had a couple more narrow misses after that.  I have never believed that there is something that others can do that I can’t in chess as long as I have the opportunity.  That being said, it’s certainly a wonderful feeling to know that I have broken Magnus Carlsen’s record at gaining the IM title. CW: Do you think that setting this record will inspire you to push even harder toward the GM title? AL: I have set many records in US chess and beyond.  I have also earned the world title twice for my age without as much professional guidance as I should probably have.  This addition of the IM title time record for the US is nice but not really a big deal for me.  Of course, these achievements never come easily for me, and probably for anyone else for that matter.  I have been working very hard on improving.  Some people have commented that I may not take chess that seriously since I have been getting these wonderful and incredible things done in chess while also a full time student in public school.  I can tell you that quite the opposite is true.  I have been very serious and hardworking in chess while I maintain my academic work in school with the help of my teachers.  I want to bring the chess world championship title back to the United States of America just like Bobby Fischer.  That is my biggest inspiration and motivation.  I have the track records on my side.  All I need is to find the serious sponsorship that has been nearly completely lacking.  C: What are your goals when it comes to chess? 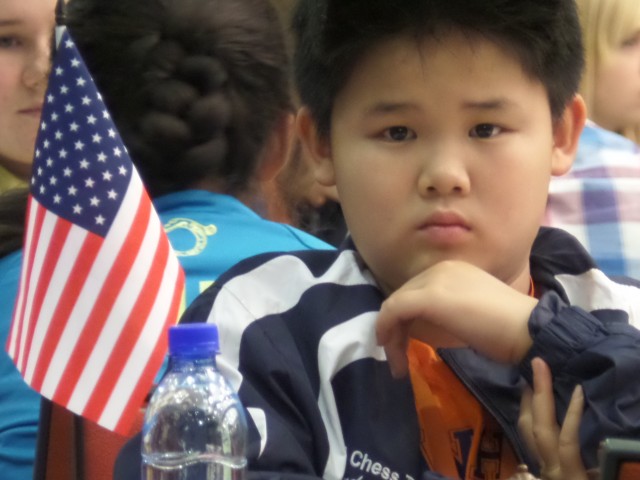 A: As I mentioned, my ultimate goal is to become the Chess World Champion.  But I am only 12 and my chess career is still in its very early stage though it seems to me that I have been playing chess for a long time.  It may not seem that modest or realistic to talk about things.  I know that I still have a very long way yet to go even if I can get to my goal some day with very hard work and maybe a lot of luck.  But I am willing to try my best one step a time.  For now, my goal is to improve my game and get my GM norms to obtain the GM title as soon as possible.   C: What non-chess interests and hobbies do you have?  A: I enjoy reading a lot, especially novels.  I also like playing badminton with my brothers and my sister.  I swim whenever I can as a form of relaxation and exercise. C: Are you having a hard time keeping up with your school work while traveling to play in tournaments? A: I have been fortunate to do well in school since day one.  I guess that I have very good teachers, principals, and friends in school.  They all are very supportive of my chess pursuits.  That gives me good reasons to love school work, I supposed.  I am still a 7th grader in middle school and one of my courses this semester is a high school math course.  But as my chess career is intensifying, my parents have finally agreed to allow me to be home schooled.  They have been working with the school district to complete the paper work for this so that in the future I will have more flexible schedules to go to chess tournaments.  But I love school and I will keep my academic pursuits.  I will still come to the same school to take a couple of courses even as my homeschool arrangement takes effect. C: Are there any countries that you haven’t been able to play in yet that you are particularly looking forward to playing in one day? A: There are many.  The Netherlands in particular, then Russia and India since they have some very strong players and very good tournaments.  Many other European countries too.  The organizers of both the Reykjavik Open in Iceland and the Qatar Masters Open in Doha, Qatar had kindly provided excellent conditions for me to participate in their events.  Now that I am getting more mature in age and stronger in chess, it would be wonderful to go back to compete in these tournaments again.  In my judgment, they are running some of the very best chess tournaments in the world. C: How much do you study chess each day on average? A: I try my best to work on chess one to two hours a day during school days.  This is not so easy sometimes.  When this happens, I just have to let the day go by without chess.  During weekends and school breaks I spend a lot more time on chess, of course. C: Do you follow a lot of top level tournaments? A: I do follow some top level tournaments when I have time.  But I am short in time a lot of times during my daily functions. C: Do you study much about the history of chess?  Specifically the games and tournaments of the past? A: I like to study some great games from the good old days.  The history of some old tournaments in the distance past is very fascinating too, but I must admit that I have not systematically studied chess history since normally I am quite busy, so it is quite difficult to find time. C: Who are your favorite players of all time?  A: I don’t have any favorite players in particular, but I have a lot of respect for Bobby Fischer, Garry Kasparov, and Magnus Carlsen for their contributions to the game. I also asked Awonder’s father Will if he would like to add anything, and he said: Will: Awonder and his family are very thankful to the University of Texas at Dallas that graciously sponsored his participation in the UTDallas Fall FIDE Open (November 20-25, 2015) in which Awonder earned his third and final IM norm to complete his IM title requirements.  Awonder’s uncompromising chess pursuit and unprecedented rise has been quite a struggle due to financial constraints and the lacking of serious institutional backing.  However, many friends and supporters have extended their helping hands to Awonder one way or the other. Although it is impossible to list all the nice people who have helped Awonder’s chess development in the last few years here, Awonder and his family would like to take this opportunity to express their profound gratitude to:  Mr. John Buck and his company, Dr. Tansel Turgut, Mr. Garry Kasparov, Mr. Rex and Dr. Jeanne Sinquefield, GM Susan Polgar and FM Paul Truong , FM Aviv Friedman, Mr. and Mrs. Bill Goichberg, the St. Louis Chess Club and Scholastic Center, the Kasparov Chess Foundation, Mr. Mike Nietman, IM John Donaldson, Ms. Jean Hoffman, Mr. Sevan Muradian, Dr. Dennis Doren,  Mr. Doug Moe, IM Gregory Shahade, GM Larry Kaufman, Dr. Connie Li and TranSmart Technologies Inc., Dr. and Mrs. Zhenhua Ma, Dr. and Mrs. Keming Song, Dr. and Mrs. John Huang, Dr. and Mrs. Shucai Huang, Dr. and Mrs. Yinming Li, Dr. and Mrs. Xue Qi, the Marshall Chess Club,  Dr. and Mrs. Walter High, Dr. Nidal Akar, Mr. Jerry Nash,  FM Sean Vibbert, Mr. James Stallings, Mr. Luis Salinas, Mr. Martin Hughes, Mr. William Broich, FM Alex Betaneli, Mrs. Katy Mahr, Mr. John Christopherson, Mr. Eric Branch, the Madison Metropolitan School District, the Wisconsin, Iowa, Illinois and Michigan chess communities.
SHARE: