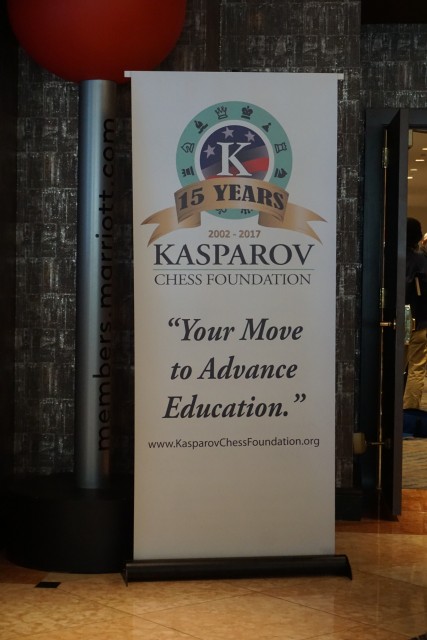 The 51st Greater New York Scholastic Championship sponsored by the Kasparov Chess Foundation, in association with the Chess Center of New York and Little House of Chess shattered previous attendance records with 1478 players participating in 14 separate sections.  The attendance this year was several hundred players higher than last year’s attendance of 1263. This year was a resounding success as the organizers made several tweaks in terms of staffing and format which led to all rounds starting pretty much on time and a positive experience for all the tournament players.  The tournament also remains the USCF's longest running rated scholastic tournament.  We also believe this is the largest rated event ever held in New York state. The Kasparov Chess Foundation sponsors several of these events around the country as highlighted by the preview article.

The Chicago event had 432 players and the Baltimore event had 250 players.  The NYC even enjoyed a visit by Garry Kasparov on both days.  Garry walked around the tournament room and team rooms and was a true ambassador of chess giving of his time to numerous fans and signing lots of autographs.  Garry also made several ceremonial first moves.  On Saturday, he made first moves in the High School Championship and Elementary Championship.  On Sunday, he made first moves in the Primary Championship and Primary Under 600.  In the Primary Under 600, the lucky player was Casey Peckham.  This board was chosen because it was her birthday, and she enjoyed a once in a lifetime experience. 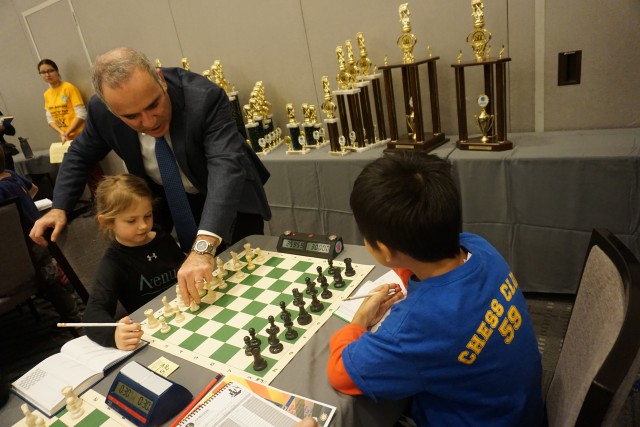 This scholastic tournament draws many of the best players in the region.  This year there were six masters, including two FIDE masters.  Part of the reason that the higher rated players show up is a significant prize: free entry for an entire year into all Continental Chess Association Tournaments that have a guaranteed prize fund!  This entry is potentially worth several thousand dollars.

The big winner of CCA free entries was Malcolm Galpern of Brooklyn Tech High School.  He went 5-0 in the Under 1900 High School section and won the playoff match, led his team to the team championship, and took second place mixed doubles with his partner Nancy Wang.  He has free entries until October 2nd, 2018!  Pulling off a three peat and winning free entries in every available category is impressive.

Another big winner was Meghana Kancharla.  On Saturday, she scored 4 ½ out of 5 in the High School Under 1200 section to take third place, top 8th grade and below, and four months of free entries to CCA tournaments.  She came back Sunday and scored 4 out of 5 to take 5th place and top grade 6 and below in the Junior High School Under 1300 section.  She tied for 4th.  On the third tiebreak system, she fell short by half a point or she would have won two more months of free entries!   She traveled from New Hampshire for this tournament and took 113 rating points back home with her!

The free entries were exactly the motivation for the tournament’s top seed FM Hans Niemann.  Hans commented that he has not won a trophy in several years and has not won a state or national scholastic championship because he concentrates his tournament activity on major tournaments that draw titled players especially events that offer norm opportunities.  Hans is only in 8th grade and played in the Junior High School Championship section.  While he started on board one and stayed there the entire tournament, he did face the second, fourth, and fifth seeded players enroute to his victory.  He started 5-0 and secured clear first with a quick last round draw.  Hans’ fourth round game against second seed NM Justin Chen features a nice sacrificial attack.  Can you find the continuation?

The 51st GNYCC also coincided with the 51st Superbowl or Superbowl LI.  That must have had special significance as the top three finishers in the High School Championship section were all named Li!  The top seeded player was FM Ethan Li, and he lived up to his billing he spent the entire tournament on board one, facing the second, fourth, and eighth seeds on the way to his clear first place finish.  In the last round, he faced fourth seeded NM Dennis Li.  Ethan Li only needed a draw for clear first place, but he clearly wanted more. The game was a poisoned pawn Sicilian and at one point Ethan was up four pawns and could have won.  However, white did have a dangerous attack, and the game eventually ended in a perpetual check. 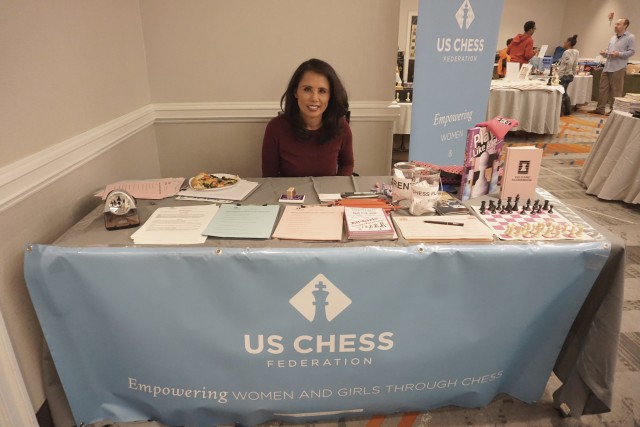 In addition to the tournament activities, there are several other notable events.  The US Chess Women’s Committee sets up a booth each year and there are displays from our sponsors such as Chess Stars and book sales from Rochester Chess Center.  The participants and friends all have a great time – one even dressed up as a chessboard from head to toe! 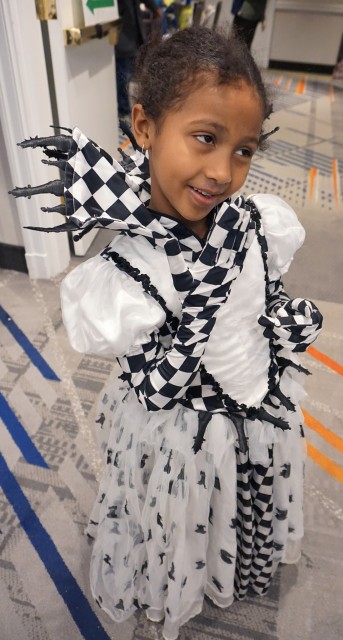 A tournament this large is a massive effort and takes a significant staff.  Chief TD Steve Immitt who along with Sophia Rohde is in his 32nd year of running this tournament assembled an “A” team of 40 personnel including seven National Tournament Directors, one Associate National tournament director, four International Arbiters, two FIDE Arbiters and two International Organizers.  Two families account for nearly 25% of the staff and have been staffing this event for a number of years.  The Rodriguez family: Hector, Hector, and Steven have been on staff for 13 years. 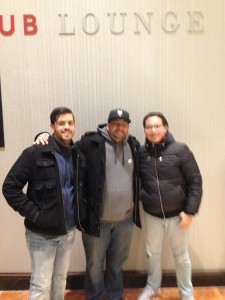 However, the staffing record goes to the McGreen family:  Kofi, Beena, Maya, and Mariah.  They have been on staff for 19 years.  This family could even be larger as Najee McGreen has been on staff many years but current professional obligations keep him too busy to be on staff in recent years. 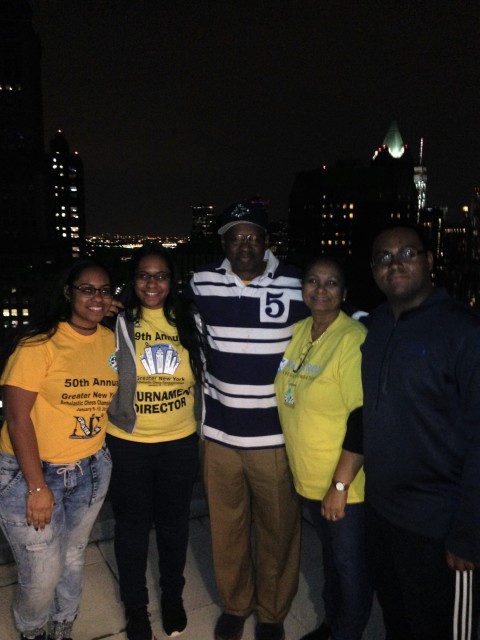 Event coordinator Danny Rohde started playing in the tournament in kindergarten! After Sunday’s last round, many of the TDs adjourned to a team room lounge to watch the Superbowl.  I wasn’t sure who the majority of the staff was routing for, but all had a great time watching an exciting game. 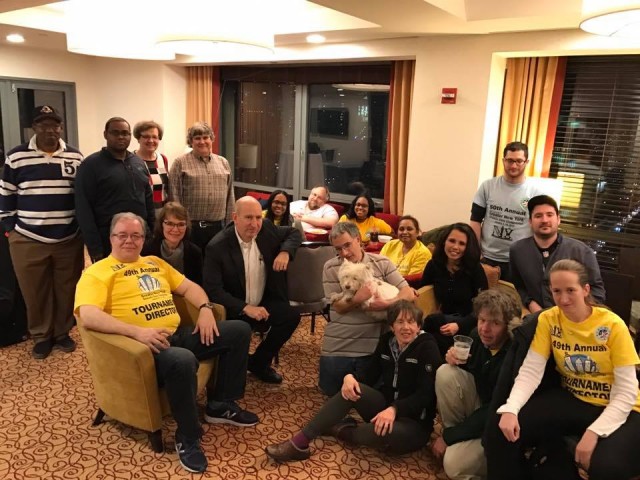 For more information, visit the Kasparov Chess Foundation Website, the tournament results, and the rating report.