The 52nd Annual New York State Scholastic Championships were held in Saratoga Springs, New York on March 9-10. This year’s tournament again broke records as 1218 players made the trek to Saratoga Springs. But one young man made a name for himself, and gained the attention of both national and international press along the way. HIGH SCHOOL In the High School section top seed FM Shawn Rodrigue-Lemieux scored an undefeated 5.5/6 to take clear first by a full point. Rodrigue-Lemieux is a 9th grader from Sophie Barat school in Montreal, Canada. After routine wins in rounds one and two Rodrigue-Lemieux defeated WIM Evelyn Zhu in round three, NM Max Li in round four and FM Qiuyu Huang in round five before drawing in round six with FM Vincent Tsay. 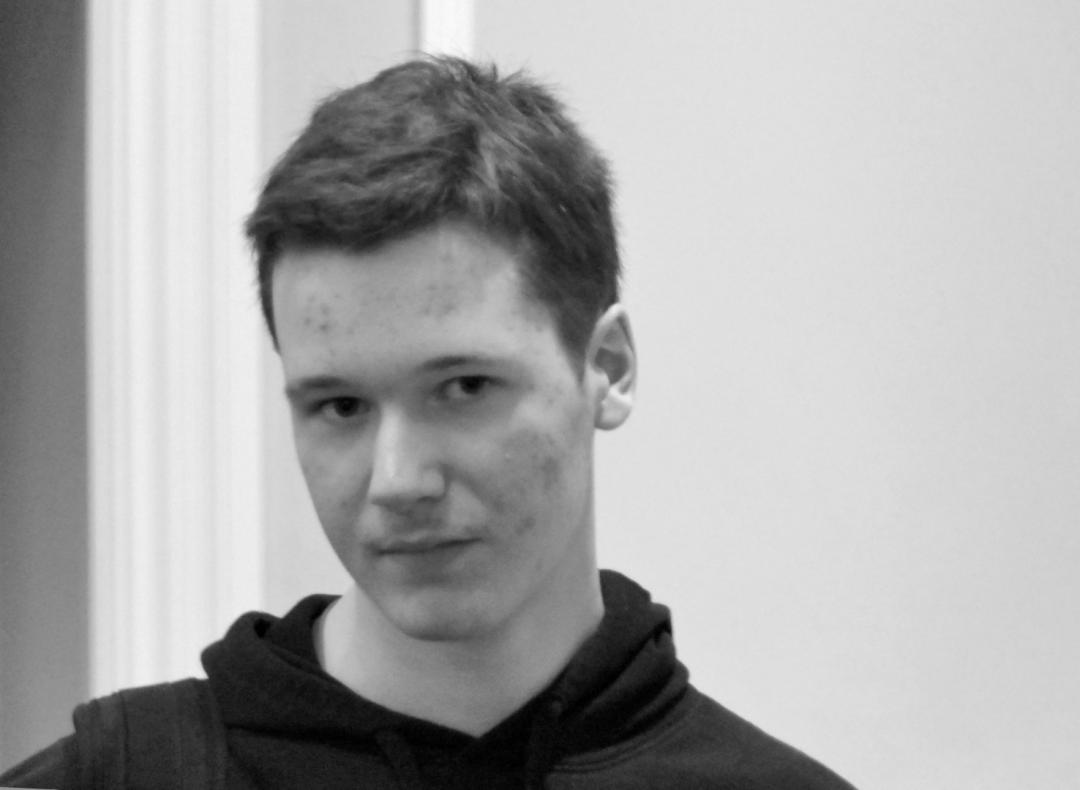 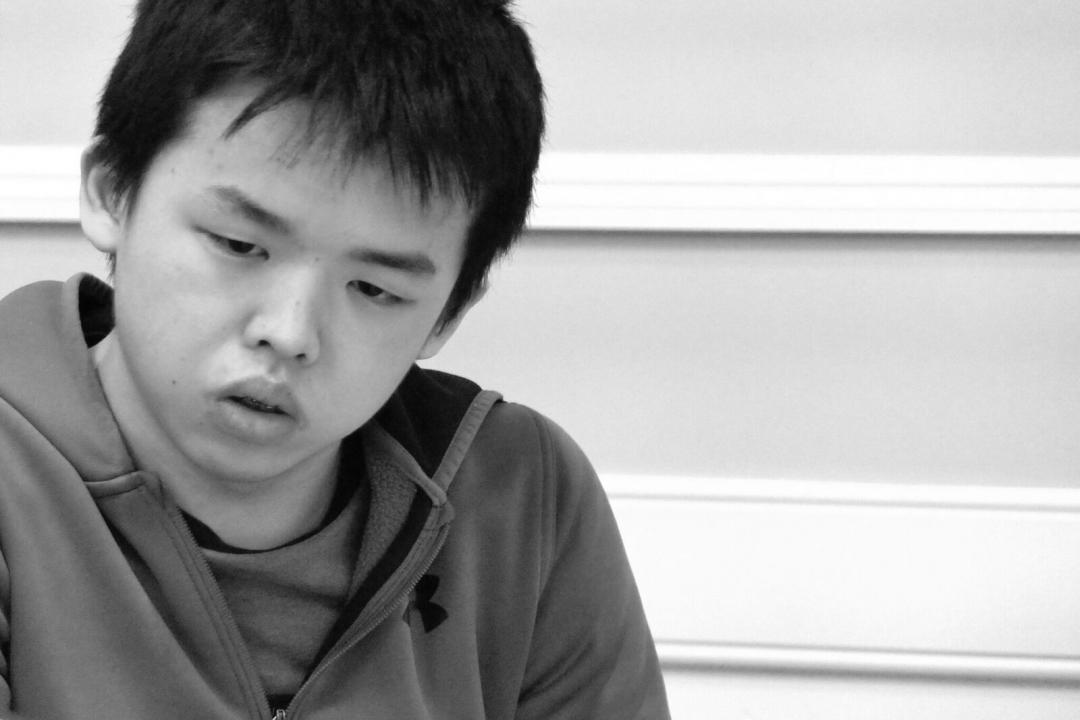 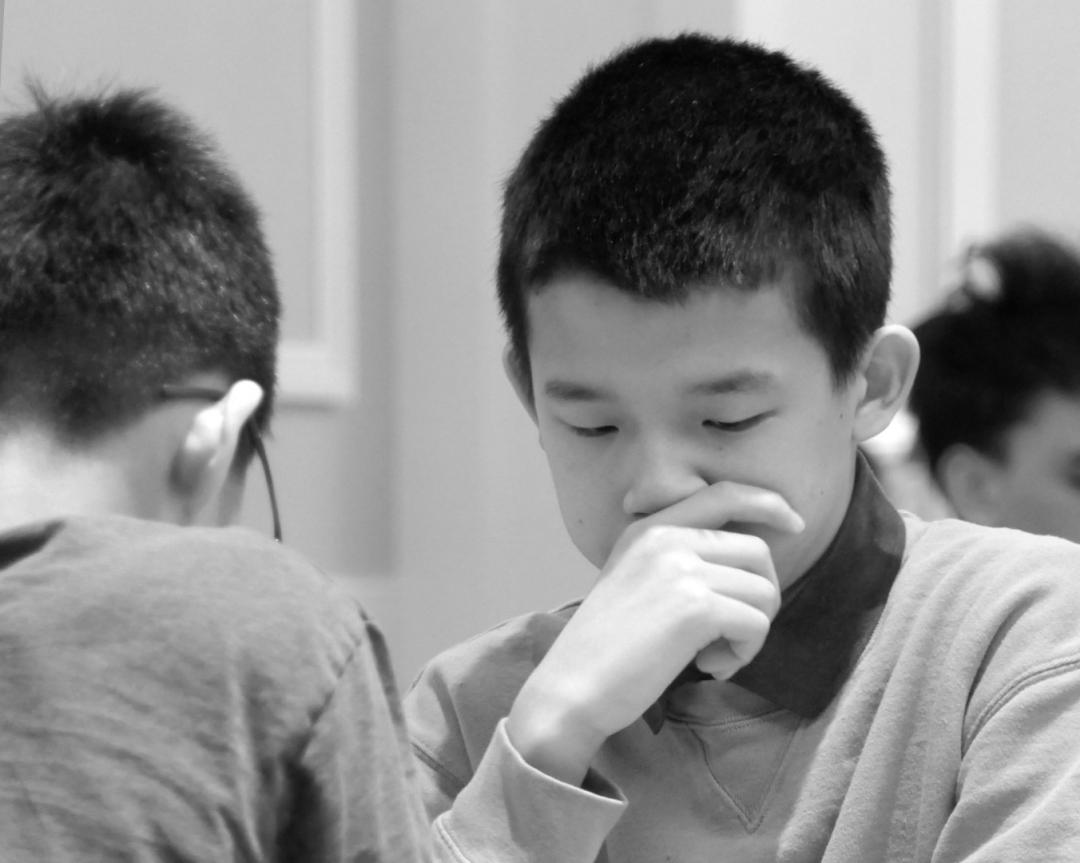 Rodrigue-Lemieux only needed the draw in round six for clear first and, since boards two and three drew, he wound up winning by a full point. The game that essentially decided first place was the round 5 encounter against fellow Canadian FM Huang.

The New York State Champion titles are awarded to the top New York player and school. NM Max Li had the highest tiebreaks of any New York player among those tied for second place. Li scored 4.5 points losing only to Rodrigue-Lemieux and drawing with WFM Martha Samadashvili in the final round. Max has qualified to represent New York in the 2019 Denker Tournament of High School Champions. In round three, Li played a nice exchange sacrifice that nets him material, an attack and eventually the game. The Canadians were not just content to win the individual honors – they also took team honors. Jean De Brebeuf from Montreal, Canada finished first in the team standings. New York’s Brooklyn Technical High School won the New York State title, finishing ahead of Edward R. Murrow on tiebreaks. The high school sections also have mixed doubles teams. The winning team was Nancy Wang and Calvin Yang with 8.5 points out of 12. JUNIOR HIGH Canadian players continued their winning ways in the Junior High School section., which finished with a four-way tie for first. NM Kevin Zhong scored 5 out of 6 and had the highest tiebreaks to claim the first place trophy. Zhong drew with FM Nico Chasin in round 4 and Jack Levine in round 5 and won the rest of his games. 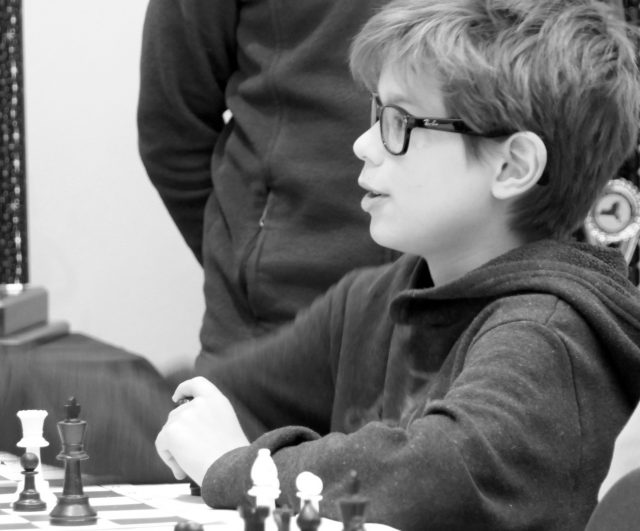 Jack Levine drew with Zhong in round 5 and defeated Chasin in round 6 to finish at 5-1.  Here is the game between two of the co-champions with Levine's notes.

NM Gus Huston finished in second place on tiebreaks. As the top finishing New York player, Huston has earned the right to represent New York at the 2019 Barber Tournament of K-8 Champions. Huston provided some notes to one of his critical games. Kyle Lancman also scored 5-1. He lost to Zhong in round three, but won out to finish at 5-1 and take fourth place on tiebreaks. Here is Lancman’s round two victory featuring a sharp Dragon attack. IS 318 was a clear favorite in the team competition as their top four had an average rating of 1831 and they had the most players of any team. As a point of reference, the next highest four rated players in the event had an average rating of 1681. IS 318 cruised to victory with a team that boasted quality and quantity. ELEMENTARY The Elementary Championship had three players rated over 2000. In the end, Caleb Klenoff a 5th grader from Westchester Torah Academy in New Rochelle, NY won with a perfect 6-0 score. Klenoff started as the third seed and defeated second seeded Iris Mou enroute to winning the event. Klenoff was the only 6-0 in the championship section. Here is his last round win: The team champion was Speyer Legacy School. Speyer was the strongest team and had the highest rating of any team at 1845. They were led by the top seeded player Brewington Hardaway who wound up finishing in second place in the tournament with a score of 5-1. PRIMARY The primary championship ended in a bit of a surprise. Tanitoluwa Adewumi was the eighth seed and was rated over 200 points less than the top seeded players. Still, Adewumi finished in clear first place with 5.5/6. 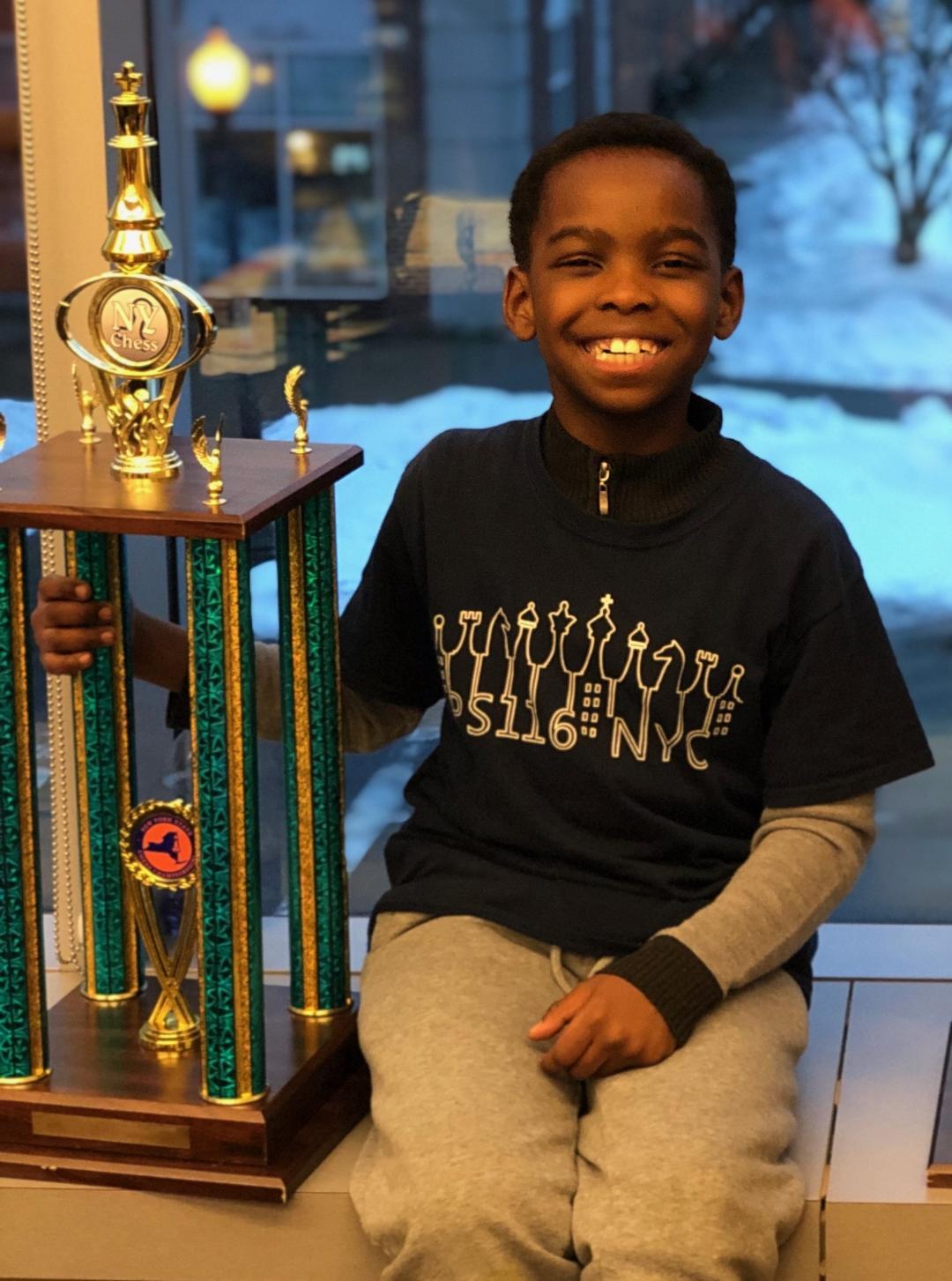 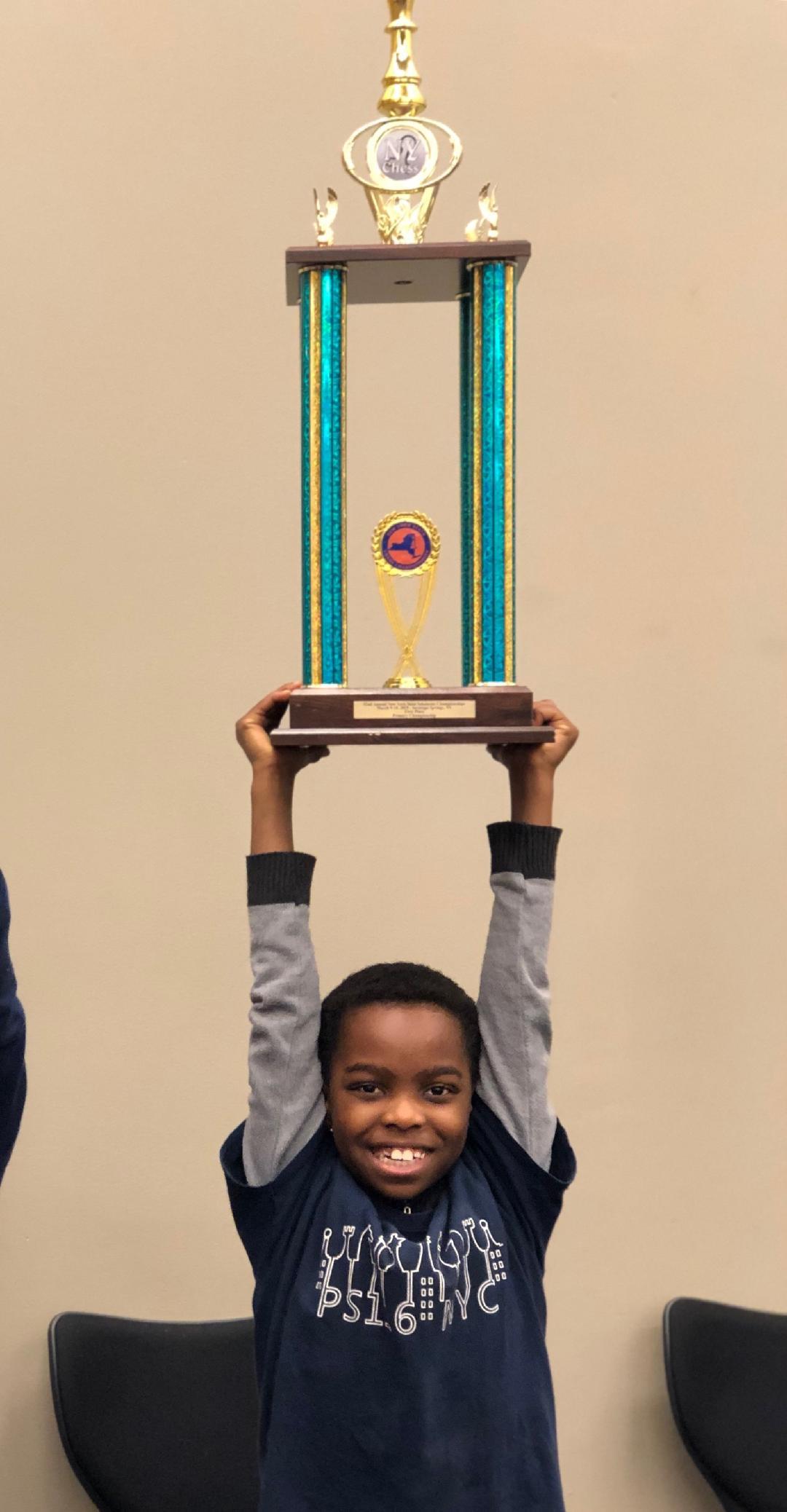 The end result might have been a surprise to some, but to those who know Tani, it was no surprise at all. His chess prowess is very impressive as he has only been playing for one year and has shot up from 105 to 1587 in 12 months! Certainly, Tani has a long way to go, but it will be interesting to watch his progress! Here is Tani's only available game from the tournament.

Update: Agadmator, one of YouTube's leading chess streamers, has done a video on Tani's game. Tani’s story has received a lot of attention in the national and international press. It turns out that Tani and his family are refugees from Nigeria, currently (as of March 19) living in a homeless shelter while their asylum process unfolds. The New York Times did an excellent story on his victory, and as did the Spanish newspaper El Pais.
Tweet URL

A GoFundMe campaign has been set up to support Tani and his family. As this goes to press, over $168,000 has been raised in only three days! (Note: this link is provided for informational purposes only.) Speyer and Dalton won the team competition with 15.5 points. Speyer edged Dalton on tiebreaks. KINDERGARTEN The Kindergarten/first grade championship was one by Christian Bartolini on tiebreaks over Suvan Baranwal each with 5.5 points. The team competition was won by Hunter College Elementary School (powered by Bartolini) on tiebreaks over Avenues: The World School each with 15.5 points. SIDE EVENTS There were two side events. The Parents and friends side event was won by Giorgi Sukhiashvili with a perfect 4-0 score. The bughouse tournament was won by the team of Calvin Yang/Nancy Wang. It takes a lot of people to make a 1200+ player event successful. International Arbiter (IA) and National Tournament Director (NTD) Steve Immitt led the event. IA and NTD Sophia Rohde handled much of the event manager duties and logistical issues with Scholastic Council member Danny Rohde. Nils Grotnes provided webmaster support. IA and NTD David Hater led the accomplished crew of tournament directors. Full tournament details can be found at: www.chessevents.com/nyscholastics/. Previous Continental Chess tournaments can be found at the Continental Chess website at http://www.chesstour.com/cross.html.