The first World Team Chess Championship was held in Lucerne, Switzerland in November 1985. The U.S. team qualified to play in the Open section but did not attend, and was replaced by a team from France. There was no Women’s section at these first incarnations of the event, and this oversight was only remedied in 2007. The U.S. has medalled three times in the World Teams. The Open team won Silver in both 1997 and 2009, and Gold in 1993. Today we revisit the 1997 event, also held in Lucerne, and our Throwback is drawn from Larry Christiansen’s report in the January 1998 issue of Chess Life. 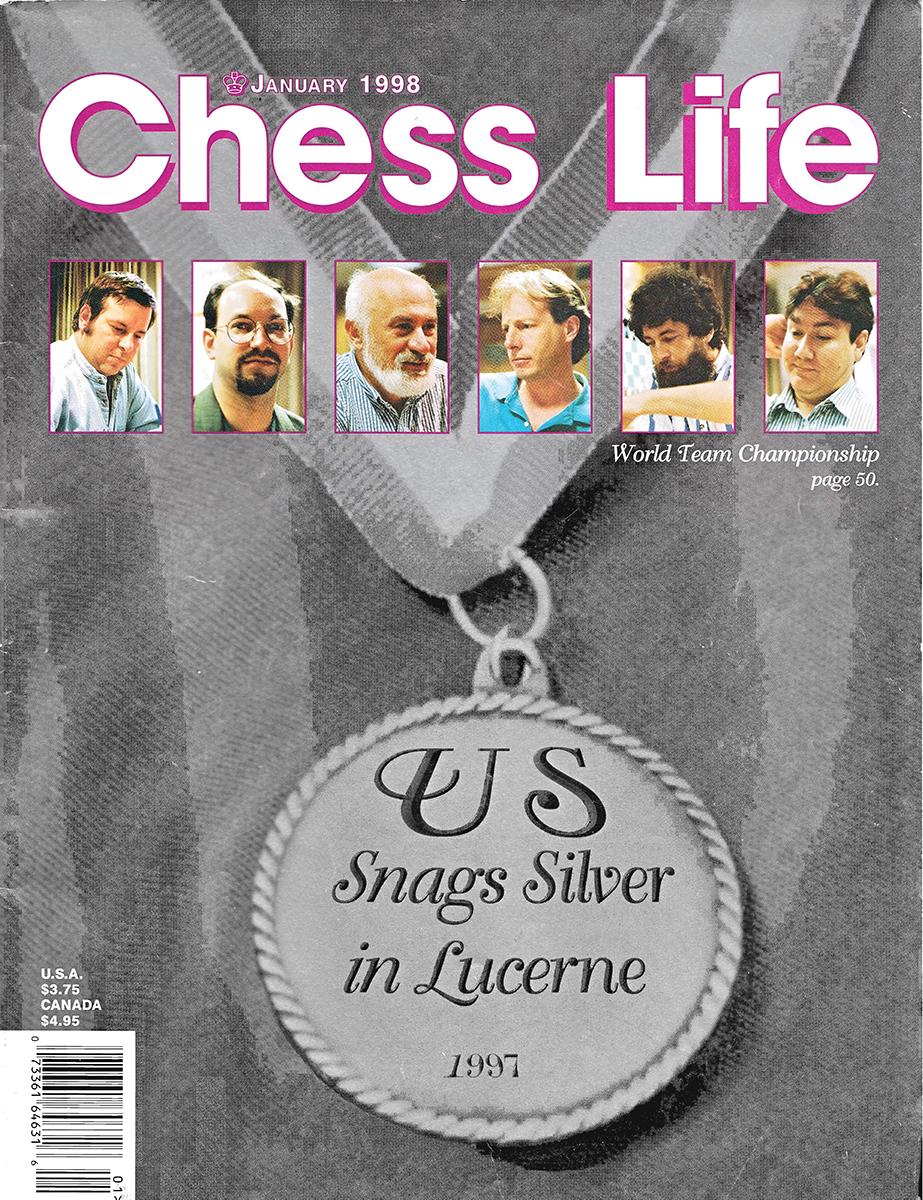 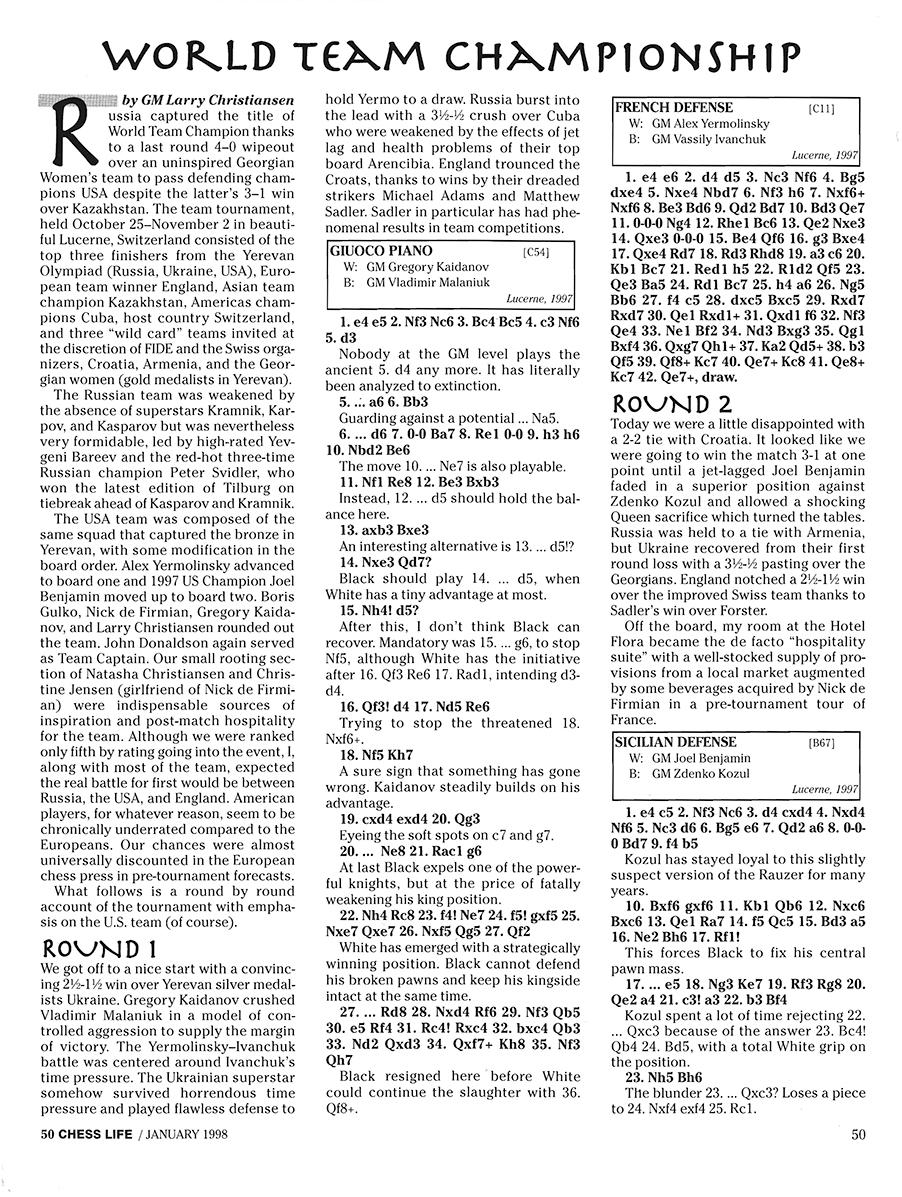 The 1997 team was identical to the Bronze medal winning team from the 1996 Yerevan Olympiad, although the board order changed. John Donaldson served as Team Captain. Final standings, as found in Chess Life. 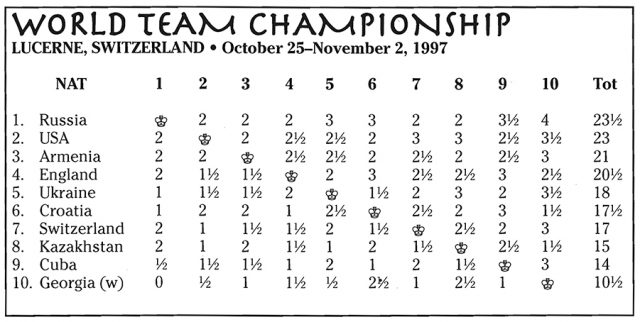 Individual medals: Yermolinsky won bronze on Board One, Kaidanov took gold as 1st Reserve, and Christiansen won silver for his performance as 2nd Reserve. In what follows we present three games from the tournament with Christiansen’s analysis. Game 1 Our first game features a nice win in the Giuoco Piano by GM Gregory Kaidanov, who is currently playing in the Spring Classic B Section at the Saint Louis Chess Club. Played in Round 1, when the U.S. defeated the Ukraine team by a score of 2.5-1.5, Christiansen writes that “Kaidanov crushed Vladimir Malaniuk in a model of controlled aggression to supply the margin of victory.” Game 2 GM Joel Benjamin lost a fascinating game in Round 2 when GM Zdenko Kozul took advantage of a Benjamin mistake, and took control of the game with a powerful Queen sac. This variation of the Richter-Rauzer, famously dubbed the “Kozul suicide variation” by Yermolinsky for its no-holds-barred, burn every last bridge approach, is currently topical. Kozul himself has published a book on the topic in recent years, and a downloadable database product on the variation from IM Ogulcan Kanmazalp at modern-chess.com is just out. Game 3 The background of this game - a hard-fought, workman-like victory by Christiansen - is important for context. The U.S entered the ninth and final round tied for first place with Russia, but a suspicious 4-0 Russian victory over the Georgian team meant that the U.S. had no margin for error. After Joel Benjamin, playing on Board One, was forced to take an early draw after an unambitious opening by his Kazakh opponent, Christiansen could play with a bit of unwanted freedom. All of these games and their annotations are presented as published in the magazine, and without computer corrections. There are corrections to be found, of course, but readers might take it upon themselves this week to locate them without silicon assistance. Trying to find holes in published analysis is an excellent way to hone one’s analytical skills. It’s also fun!
SHARE: