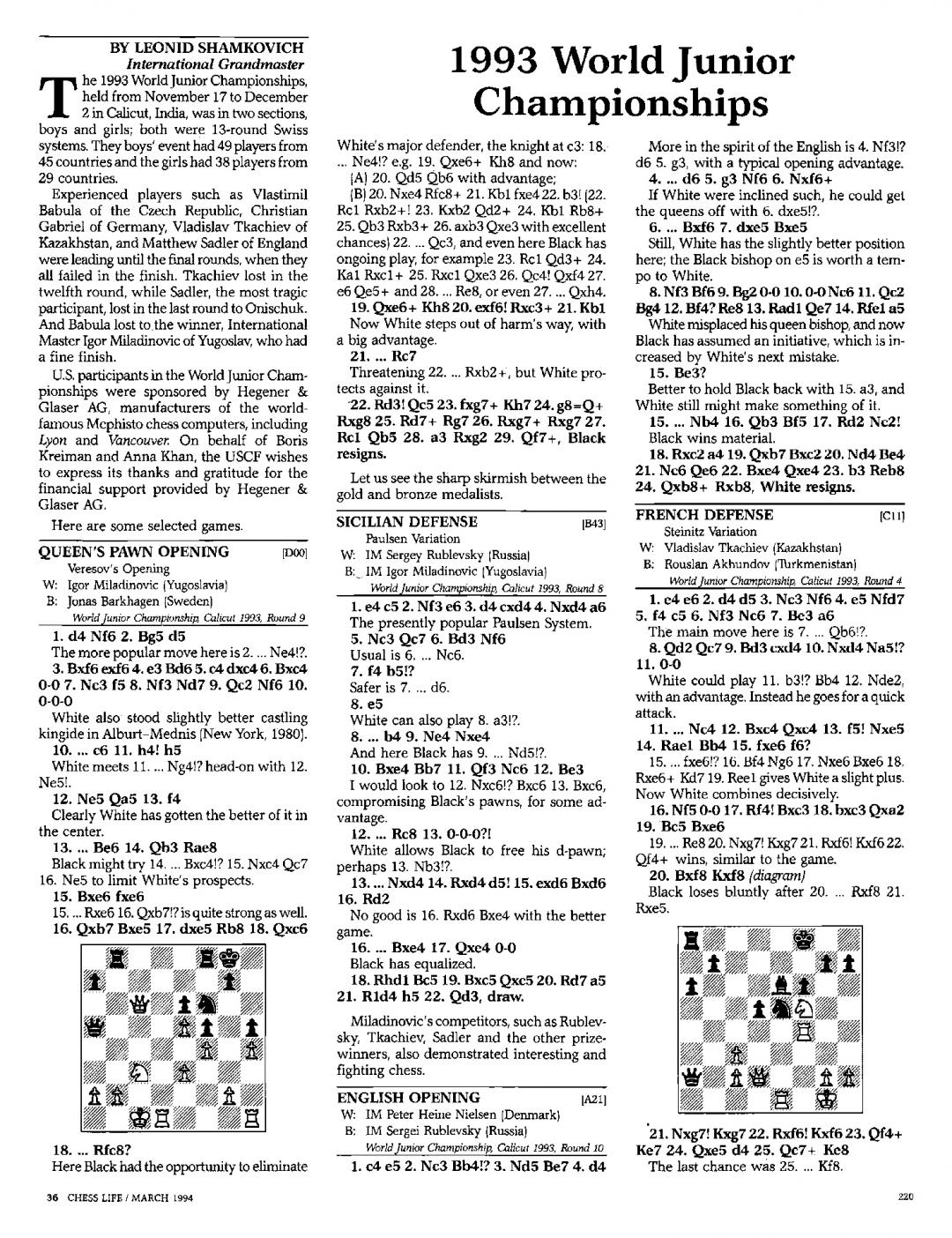 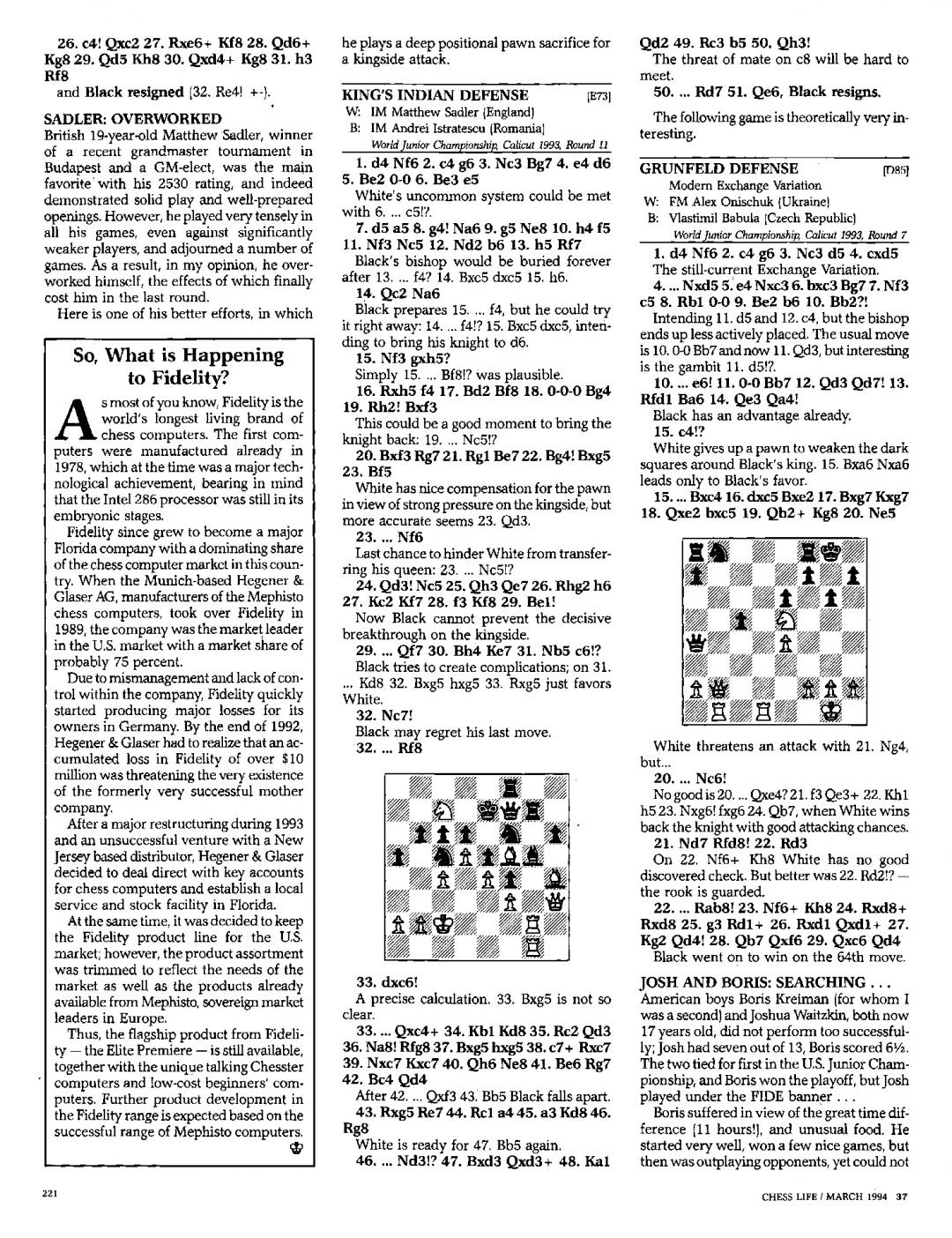 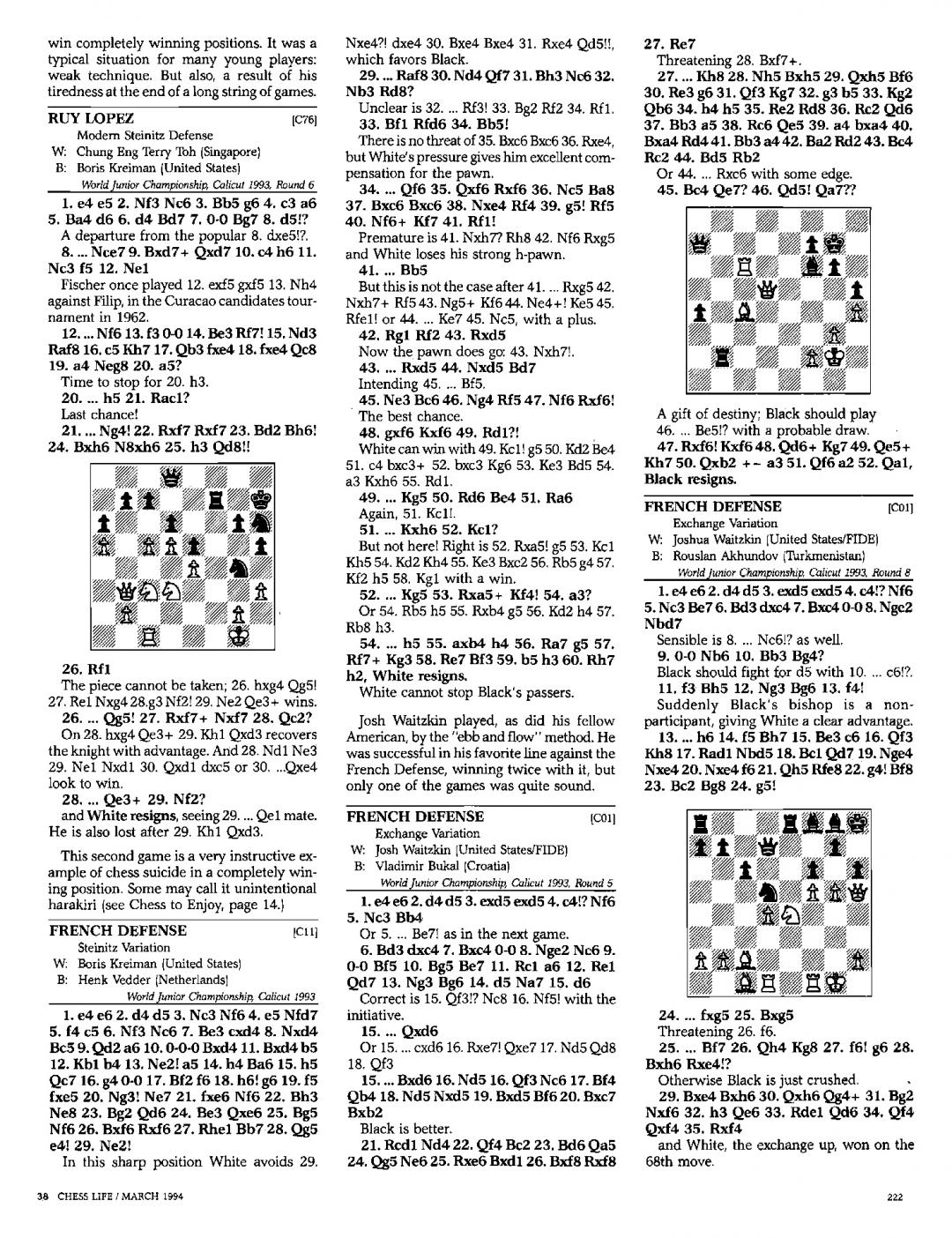 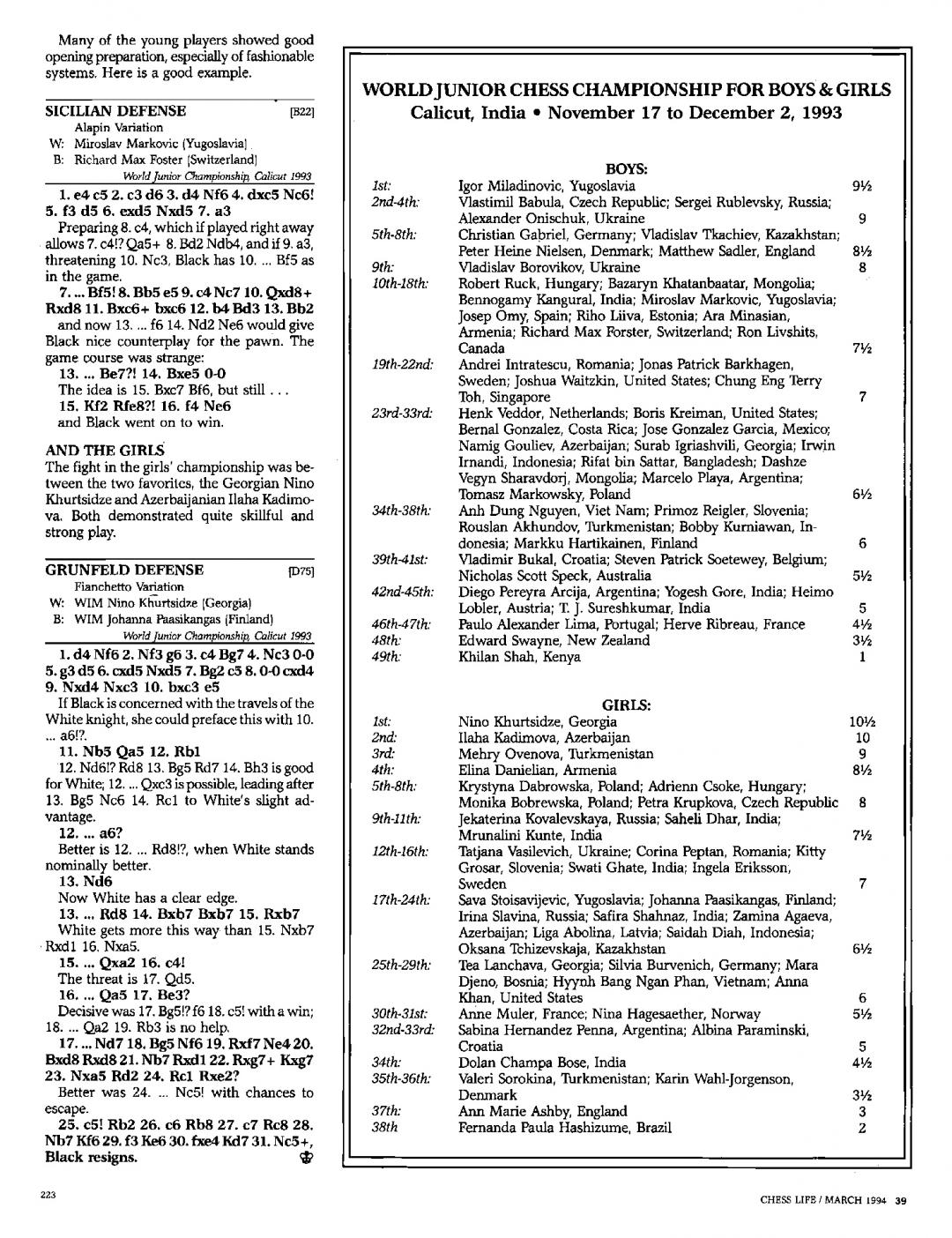 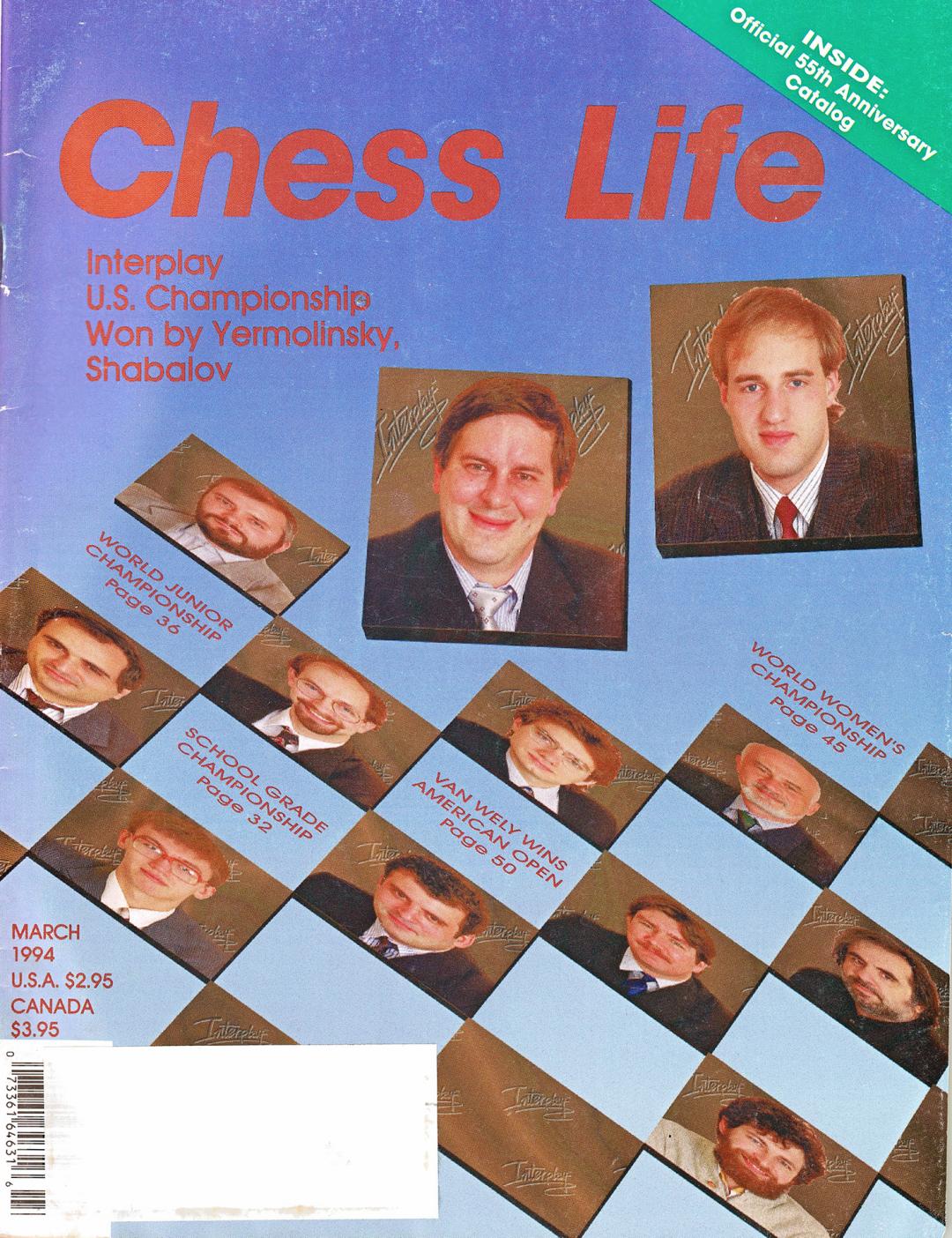 This week’s Throwback comes to us directly from the March 1994 issue of Chess Life. The cover features news on the 1994 U.S. Championship, which was won by Alex Yermolinsky, back before he was everyone’s favorite Uncle, and a hirsute Alexander Shabalov. Among the other articles in the issue, which include John Fedorowicz on the 1993 PCA World Championship match, Loek van Wely’s win at the American Open, and obituaries for both former US Chess Board Member George Cunningham and International Master Boris Kogan, is Leonid Shamkovich’s story on the 1993 World Junior Championship. Shamkovich (1923-2005) was (along with Anatoly Lein) among the first Soviet emigres to arrive in America, heralding the fundamental reconfiguration of American chess in the 80s and 90s by former Soviet players. A frequent writer for Chess Life, Shamkovich authored a number of chess books, and by all accounts he was respected and well-liked by his peers. His piece on the 1993 World Juniors is, in many ways, representative of a different time. The playing field was divided into “Boys” and “Girls” championships instead of today’s more inclusive “Open” and “Girls.” Shamkovich gave the “Girls” event just half a column’s attention, and he mentioned the American representative, Anna Khan (now Hahn), only in passing. So why, then, are we drawing attention to it once more? My interest was piqued when I saw this game by “GM-elect” Matthew Sadler. Chess Life readers will certainly know Sadler, along with recent co-author Natasha Regan, as one our leading chess writers. Sadler and Regan’s Chess for Life (reviewed in Chess Life in June 2016) was a fascinating discussion of chess improvement and aging, while their newest book, Game Changer: AlphaZero’s Groundbreaking Chess Strategies and the Promise of AI has appeared to deserved acclaim. See my review in the April 2019 issue of Chess Life for more on the book. People forget that Matthew Sadler can also play chess pretty well. Before leaving the professional ranks for a career in IT, Sadler was a top 20 player and seemed destined for a stint in the world’s elite. He returned to active play, albeit as a hobbyist, in 2010, and today Sadler pops up in the 4NCL – the British chess league – and events in and around London. Here we see Sadler in his formative years, when he had fulfilled the requirements for the Grandmaster title, but had yet to receive it. The variation he essays against the King’s Indian is offbeat, but – and this is what caught my attention – it has become recently fashionable, and no less than Boris Avrukh has recommended it in a downloadable database for modern-chess.com. Looking at the game continuation, 1. d4 Nf6 2. c4 g6 3. Nc3 Bg7 4. e4 d6 5. Be2 d6 6. Be3, Avrukh writes:

This is a very interesting move order that has not been particularly popular until the Russian Champion Grandmaster Alexander Riazantsev has started to employ it actively. White's two bishops’ moves resemble the Averbach Variation with Be2 and Bg5, but one of the key ideas of this variation is the possibility of the kingside assault by means of advancing g and h-pawns.

Here’s how Sadler played it back in 1993, with Shamkovich’s original notes.

Besides the aforementioned Anna Khan, the U.S. sent two representatives to Calicut: Boris Kreiman, the official Boys representative, and Josh Waitzkin, who (for unknown reasons) played jointly under the FIDE and U.S. flags. Most readers will know Waitzkin from the book Searching for Bobby Fischer, written by his father Fred Waitzkin, and from the movie by the same name. None of the three Americans had particularly successful tournaments, as the tournament table on page 39 shows. Waitzkin finished with 7/13, while Kreiman was a half-point behind him at 6.5/13. Anna Khan ended her tournament with 6/13. Among the games Shamkovich includes in his report are two of Waitzkin’s efforts in the 4. c4 Exchange French, a line that he (along with Maurice Ashley) made famous. I know more than one player, in fact, who picked it up from Waitzkin’s contributions to the ChessMaster series of playing programs. Here’s the first, a game that Waitzkin was lucky to win. The second, which is not in MegaBase 2019, features a thematic f4 push and a nice kingside attack. Josh Waitzkin retired from chess in the early ‘aughts, turning his attention to the martial arts. He describes this shift in his well-received The Art of Learning, but Chess Life subscribers will want to read Maurice Ashley’s interview with Fred Waitzkin in the forthcoming June issue for further updates.
SHARE:

Interesting article, but the…

Interesting article, but the only reason I can think of, why Shamkovych left out round number 12 in the article is that Waitzkin didn't win. Because of Josh Waitzkin previous exchange variation games, my brother and I prepared for it with Nigel Short's 1991 book 'New ideas in the French'. Not exactly sure who the players were (In my memory it was Short-Yusupov, but cannot find it anywhere anymore) this game went: 1 e4 e6 2 d4 d5 3 exd5 exd5 4 Nf3 Bd6 5 c4 Bb4+, a game that black won, in the end. So, my brother Richard suggested why not to play Bb4+ immediately after 4 c4, as Waitzkin did not first play Nf3 and get the same idea winning a tempo! After a hard fought draw we analysed it and Josh was speaking loudly in enthusiastic USA style: 'YOU'VE REFUTED MY OPENING'. These days I'm nog so sure about Qe7+ in all types of positions, however I do still believe that black has a very sound game. In the game, as always with junior players, it could have still gone either way....