Throwback Thursday: The 1940 US Championship

This year marks the 80th anniversary of US Chess. Born of a merger between the American Chess Federation and the National Chess Federation on September 5, 1939, the nascent United States Chess Federation struggled in its early days. There was no Chess Life (until 1946), and membership was low. The total member base was reported as roughly 1000 players at the 1940 U.S. Open in Dallas. 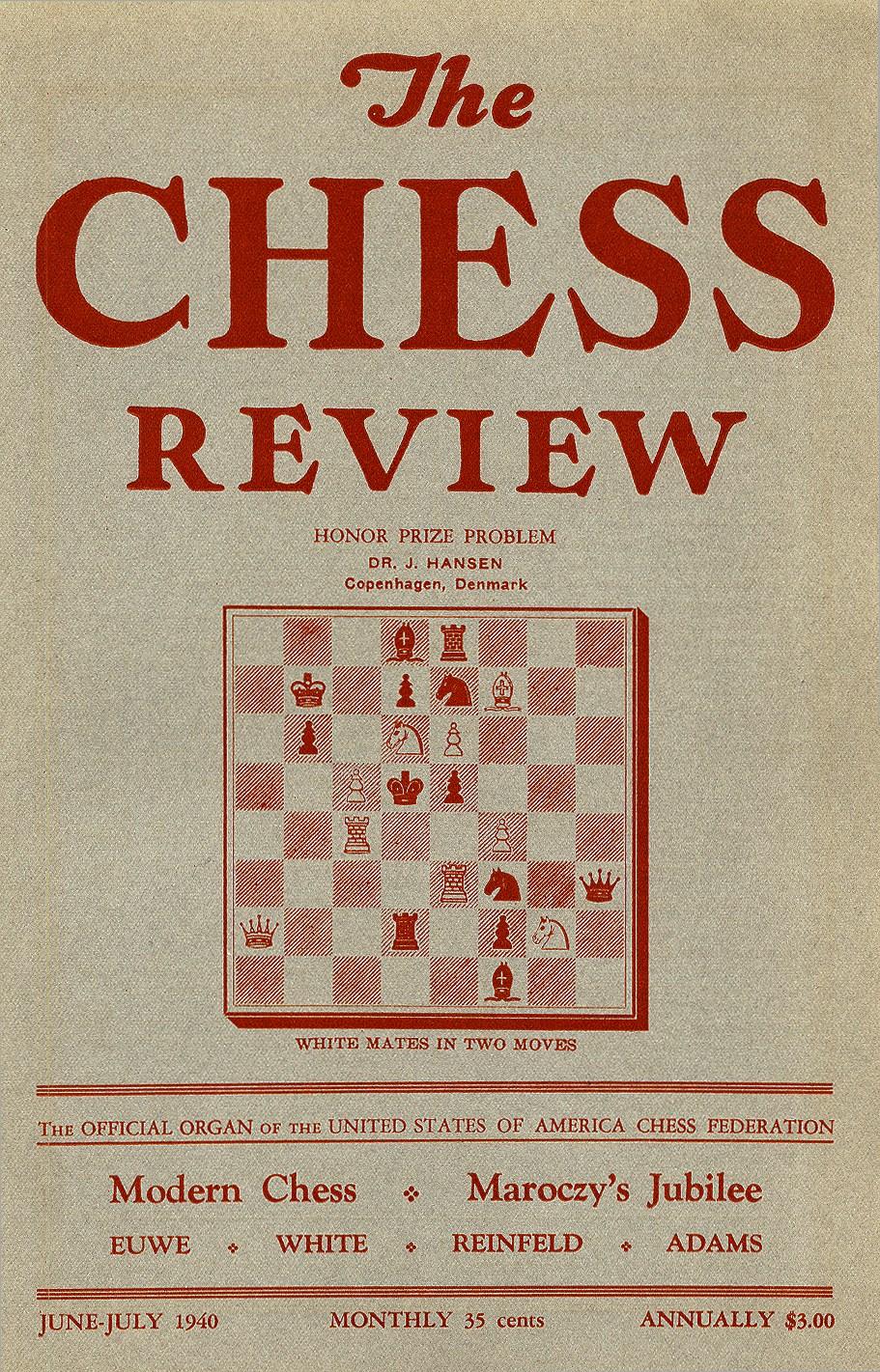 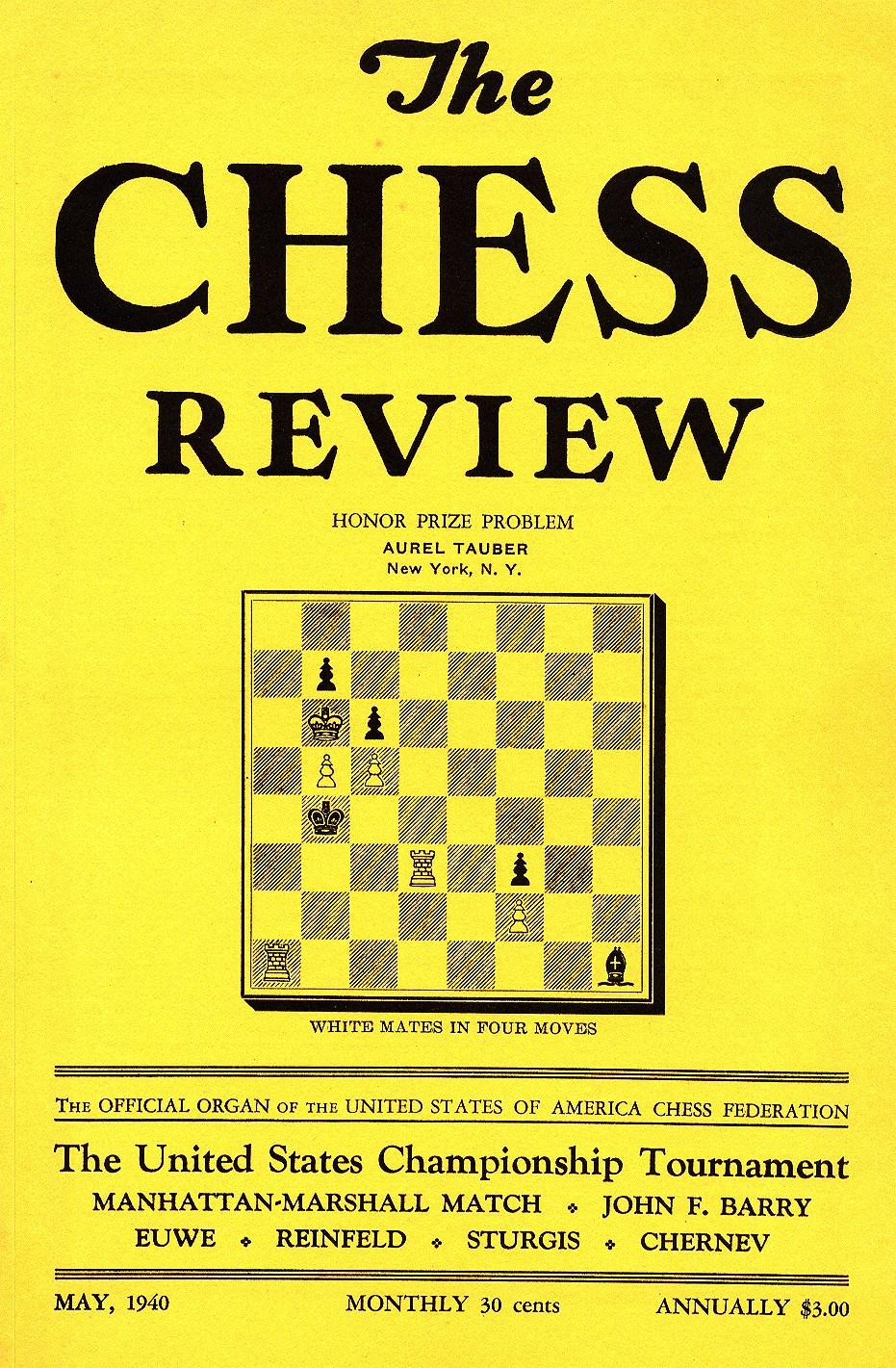 The first U.S. Championship organized under the auspices of the USCF took place in April and May of 1940 at the Hotel Astor in New York. There was a 17 player field for the Championship, won by Sammy Reshevsky by a half-point over longtime rival Reuben Fine. There was also a nine person Women’s Championship, which was won by Adele Rivero. 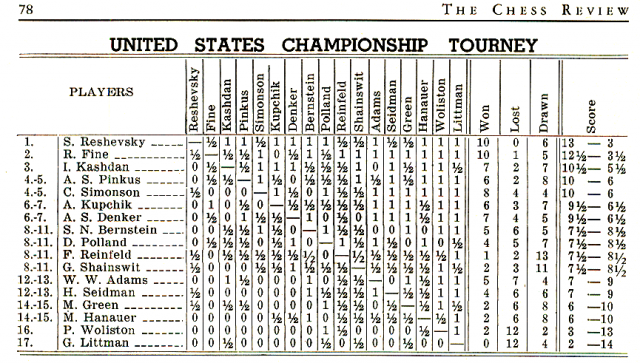 When we look back at the 1940 Championship, the key final round matchup between Fine and Reshevsky is certainly the most studied and heavily analyzed. Reinfeld treats it in the May 1940 issue of Chess Review, and Santasiere annotated it for the American Chess Bulletin. Analysts generally agree that Fine missed his chance to win on his 27th move, and the drawn game gave the title to Reshevsky.

Third place went to Issac Kashdan, a player who (in my opinion) is unjustifiably neglected in today’s histories of American chess. 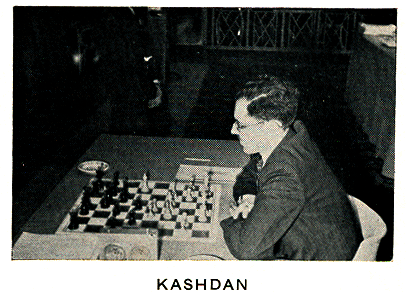 Kashdan first came to prominence in 1928 when he won the individual gold medal as first board for the United States in the Chess Olympiad, and he successfully competed in many international tournaments in the 1930s. After his tournament days were over, Kashdan served Caïssa through his writing and organizing. Kashdan founded the Chess Review with I.A. Horowitz in 1933. He penned the chess column for the Los Angeles Times from 1955-1982, and he was instrumental in organizing the Piatigorsky Cups and the Lone Pine tournaments. Two Kashdan games are presented in the June-July 1940 issue of Chess Review. One is annotated by Weaver Adams, who defeated Kashdan in round 14. Fred Reinfeld, who finished in the middle of the pack in the event, does the honors for the Kashdan-Kupchik encounter from the first round. Both are presented here in ‘translated’ form, from descriptive to algebraic, and with the original notes. There are analytical errors – can you find them? 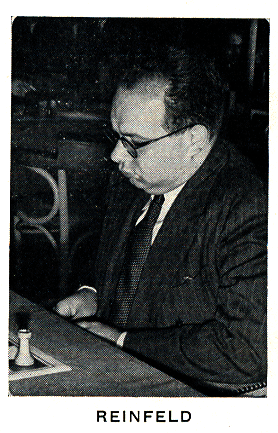 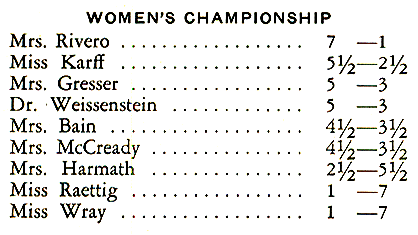 The Women’s Championship ran alongside the Open Championship, although it was certainly something of an afterthought for the organizers. Writing for the New Yorker, Robert Lewis Taylor described the Women’s event as being contested on “four card tables set up on part of the terrace.” As with the Open tournament, a series of qualifiers produced the field for the Finals, and John Hilbert does an excellent job of sorting through all the details in his masterful study of the event, The United States Chess Championship: New York 1940. His book is also one of the few sources on the Women’s Championship and women’s chess more broadly in the era. There are also two pages on the event in the June-July issue, and they are reproduced here. How times have changed! 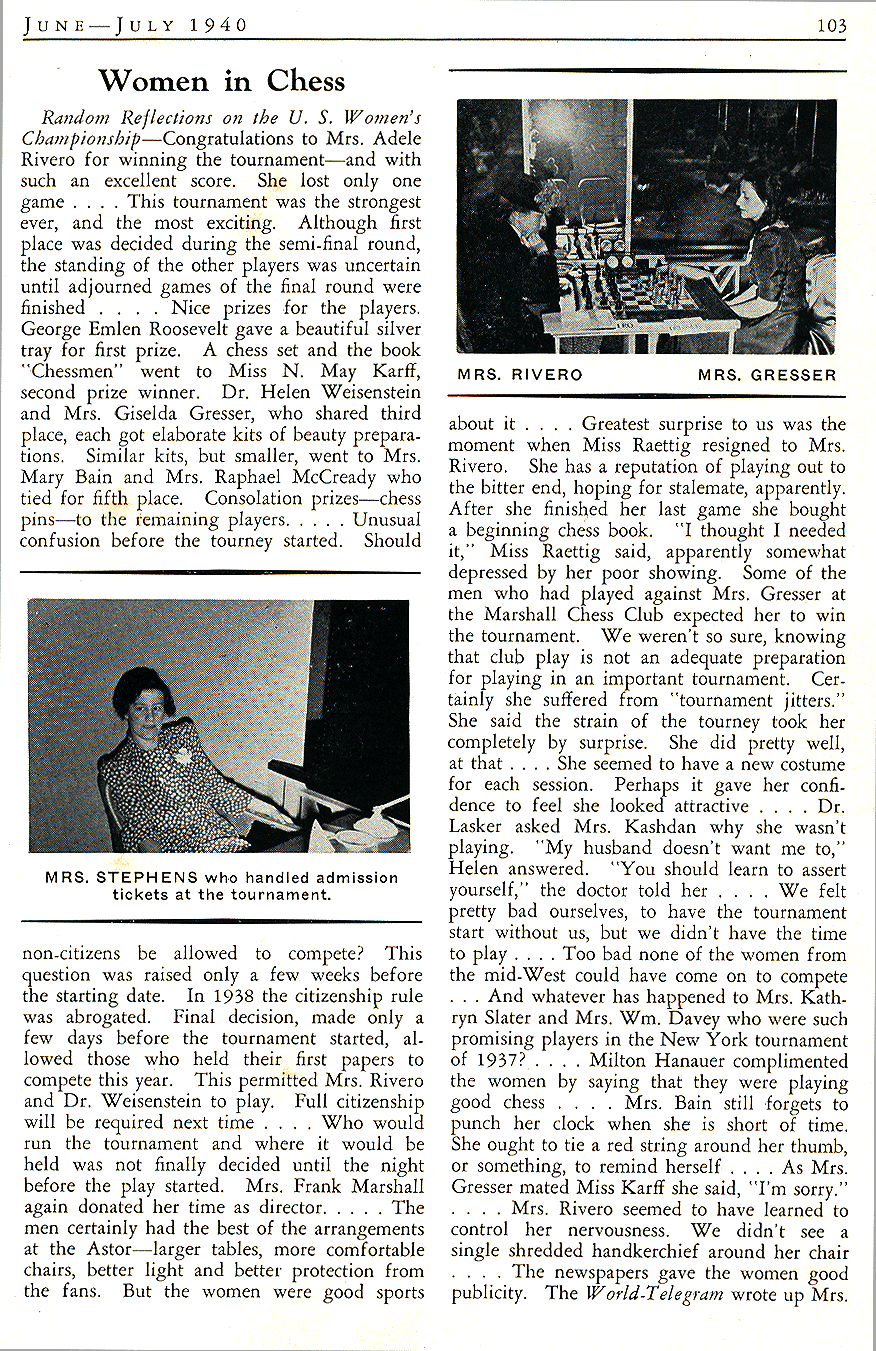 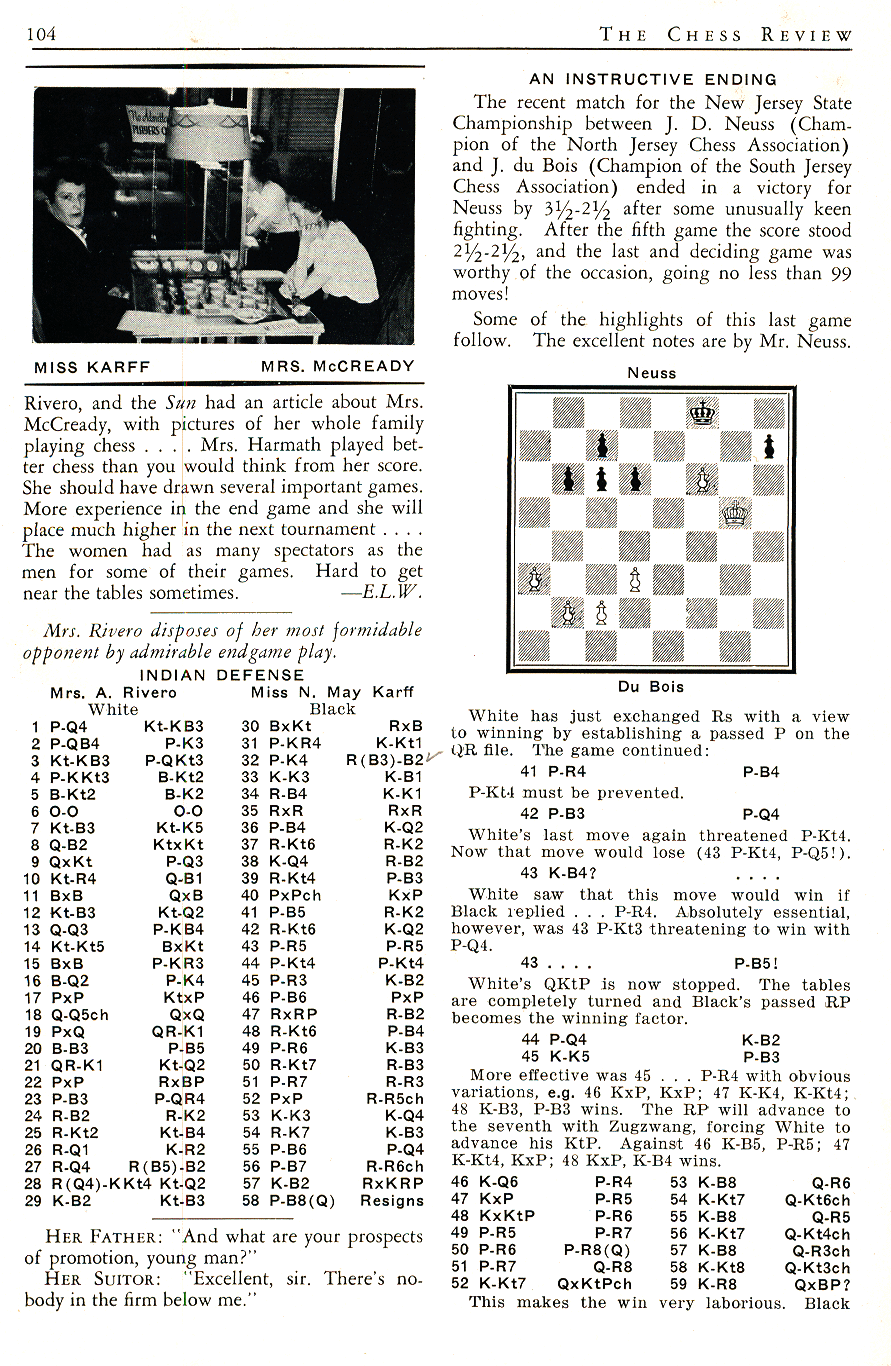 The Women’s title was won by Adele Rivero, who finished ahead of Mona May Karff by 1.5 points. Rivero also defeated Karff in their individual encounter, where (per Chess Review) “Mrs. Rivero disposes of her most formidable opponent by admirable endgame play.”  Presented here, the game is the only remaining score from the 1940 Women’s Championship. 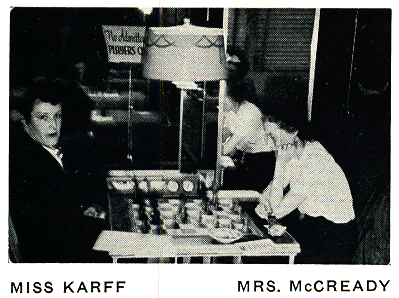 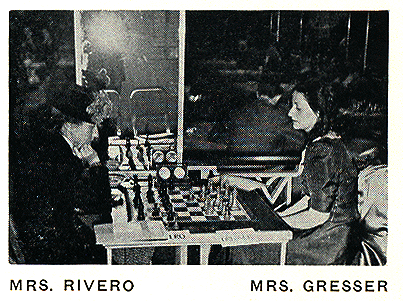 Rivero-Gresser
Rivero’s reign did not last long. Karff defeated her 5-1 in a 1941 match to reclaim the title, one that she held seven times over her US Chess Hall of Fame playing career.
SHARE: