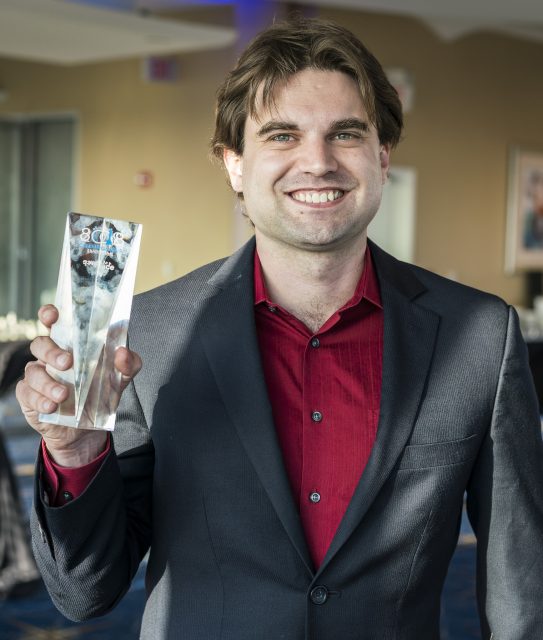 Sam Shankland after winning the 2018 US Championship. Photo: Lennart Ootes

Sam Shankland has been a major force in American chess for many years and reached a new peak when he won the 2018 US Championship convincingly as an underdog over the “Big Three” of American chessplayers, Fabiano Caruana, Hikaru Nakamura, and Wesley So, all of whom were within the world’s top 10. In his own words, Shankland has had the unique experience of being a top player who originated from a traditional American upbringing:

“I am American born and raised, there is no chess culture in my family, I played my first tournament at an age when most top talents are already masters, I never had more than one hour of coaching per week, I went through the full American K-12 education system in the traditional timetable, and I completed a four year degree from a highly ranked university. Yet in spite of all this, I have been able to consistently improve my chess…” -Sam Shankland, "Shankland on His Rise from GM to Top Hundred"

Shankland has a myriad of chess achievements that demonstrate the consistency of his improvement throughout his chess career. He became the US Junior Champion in 2010. He earned the grandmaster title in 2011 and crossed 2600 FIDE for the first time the following year. In 2014, Shankland won the individual gold medal for board 5 while competing for the USA at his first Olympiad. Later that year, he crossed into the top 100 players in the world. In 2016, he won Biel Masters with the highest score in the event’s history, reaching a new peak at #57 in the world. In 2018, along with his US Championship victory, Shankland won the Capablanca Memorial by a 1.5 margin and reached the world’s top 30. After his incredible performance in the Olympiad, he continued the momentum with back to back victories in the Capablanca Memorial and 2018 Continental Championship. Here is Shankland's victory over the legendary Judit Polgar on his route to an Olympic gold medal in 2014:
SHARE: