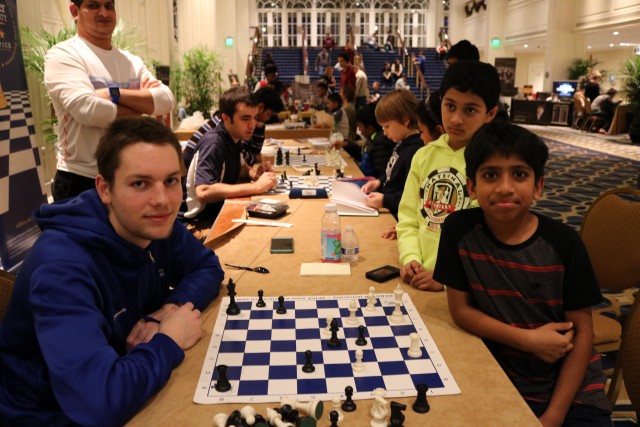 Chicago Class co-Champion Aaron Grabinsky analyzing games for the Webster booth at the 2016 National Grade Championships
The Chicago Class was held July 14-16 at the Westin North Shore, and, in what is becoming a trend, the tournament broke attendance records and the younger, non-GMs won the tournament.  This year’s event was won by FM Sam Schmakel and Aaron Grabinsky.  Each won $1500 with Schmakel winning an extra $100 for superior tiebreaks. Each of these players recently achieved their first IM norm at the Chicago Open in May.  While both players are rapidly improving, they were seeded 7th and 9th respectively, and, with the top 5 seeds beings GMs, you might have expected one of them to possibly tie for first, but initially I would not have expected that none of the top 5 seeded GMs would win the tournament. Both players took similar paths to first place.  Each was paired down to a lower rated master in the first three rounds and started 3-0.  The players were the only perfect scores on Sunday morning, and the two played a fighting draw in round four.  They were still leading the tournament going into the last round with 3 ½ points, and each player got paired “down” to a GM with three points and each won his game in a long ending. Schmakel had the white pieces against second seeded GM Ashwin Jayaraman.  The game stated as a French defense, and, while both sides had chances, Schmakel eventually triumphed in a double rook ending. Grabinsky faced third seeded GM Vladimir Georgiev.  Again, the game went to an ending where both sides had chances, and Grabinsky eventually won on move 73. This year’s Chicago Class drew 409 players, which is a significant increase from last year’s 339.  Continuing the theme of youth, there were 102 players in the class E section, many of them scholastic players.  Too many entries is a good problem to have, but can present problems for an organizer or TD.  My spacious setup floor plan was 316 players, which accounting for different schedules, byes, no shows etc is probably enough even for a tournament of 350. As the tournament approached, I quickly realized I would need to fit more tables and chairs.  First, the GMs did not get their own table, then I added tables, and, finally, in the scholastic section, I put 5 boards per two tables instead of 4.  Even with all this, I could only get room for 388 and had to use the skittles room for one round before the withdraws and no-shows stabilized the attendance.  If this trend continues, I may have to have to add more boards and have players share h-files next year! I did notice many reversed Swiss Gambits in this tournament.  In the top three sections, one of the tournament leaders had requested an irrevocable half point bye before the tournament started.  Last round byes are not at all unusual as players often need to depart early for transportation or other commitment issues, but in this case, players in Master, Expert, and Class A who were leading the tournament had previously opted for a last round bye. Each had an excellent chance to tie for first, but decisive results on board one in each section meant they had to tie for second.  GM Nikola Mitkov had 3 ½ going into the last round, but since both Scmakel and Grabisnsky won, he had to settle for being in the second place tie.  In the expert section, Sam Messick could not play at all on Sunday.  He started 3-0 and took half point byes on Sunday to finish at 4.  He could have tied for first had his preferred result occurred on board one.  Finally, in Class A, Jonathan Zhou started 4-0 and finished with 4 ½ with his bye but was denied first place by the 5-0 score of James Wei. There was also a somewhat unusual occurrence in the mixed double competition.  Normally, one of the section winners carries a team to victory.  In this tournament, none of the section winners won a mixed double prize.  The mixed doubles prizes were all won by teams with two good scores as opposed to one great score and a lesser score.  The first place mixed doubles team was won by the brother/sister team of Anumpama Rajendra & Avinash Rajendra.  Brother/sister teams are becoming more common, but these two were in the same section!  Counting mixed doubles and the blitz, there were a total of 74 separate prize winners in this year’s event which had a prize fund of $20,000. The section winners were: