7th Grade Champ Wyatt Pak on his Final Round Win

Hi, I’m Wyatt Pak, and I’m here to provide some commentary on my final game at the 2019 Grade Nationals. 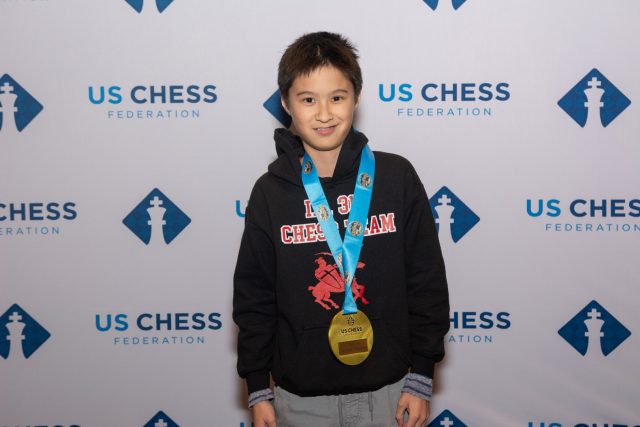 Wyatt Pak (photo Ana Vivas)
First, let me set the scene. It’s the final round, and everything is at stake. My school is tied with Hunter, and my victory could be crucial for the team win. Additionally, if I win this round, I’ll have a perfect score, and be the national champion. Bit of a problem: I’m up against a 2100, one whom I actually played and lost to last year. I’m an 1800 now, not a 1600, and I have gotten a lot of upsets this tournament, but still, this will be a really hard match. Also, my nerves are not faring well. With that said, let’s jump into the game. Overall, this was probably the most intense game I’ve ever played, and also the biggest game of endurance I’ve played. I had a good position in the opening, but I played too slowly and Ronald took the initiative, and then I was on the defensive. Thankfully, I managed to hold the position, and finally my time advantage kicked in and I was able to win. 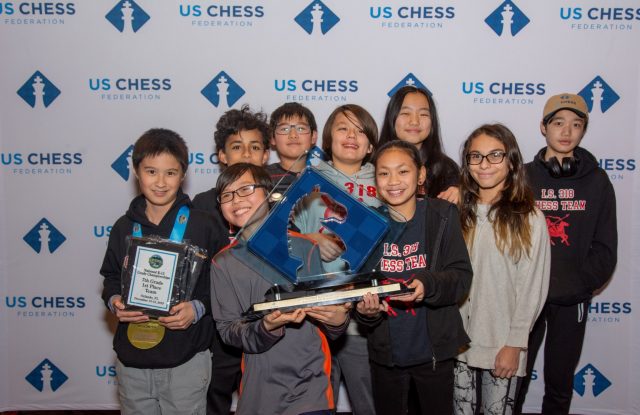 IS 318 (photo Ana Vivas)
It felt really good being able to win this game and go undefeated, and because of this, my team even managed to take first place! Overall, it was just a really intense and exhilarating game of chess. One of Wyatt's coaches, IM Alex Ostrovskiy, gave some broader context to Wyatt's big win and the team title earned by IS 318.

When Wyatt started 6th grade at IS 318 back in September 2018, he was rated 1544 and had played fewer than ten tournaments in the preceding 2.5 years. His talent and enthusiasm for chess became quickly apparent as he frequented almost every after-school chess class in addition to his chess classes during the day. By December, Wyatt had gained 150 points and was closing in to 1700 as we all traveled to Orlando for the Grade Nationals. After an exciting final round, the IS318 6th grade team finished tied as co-champions with the powerhouse NY Hunter College Campus School. Wyatt was not satisfied with his individual result, and he continued to crunch tactics, analyze his games, and review his openings until he knew them forwards and backwards. Wyatt finished his 6th grade campaign at 1838, marking a near 300-point improvement during the school year. Going into the 2019 7th Grade Nationals it was obvious that the competition was extremely tough. The Hunter team was even stronger with the addition of National Master and defending national champion Jack Levine. A team title defense appeared very daunting on paper, and our coaching staff was keen on taking the event round by round with a focus on the quality and effort of the games. After the first day we were quite happy with the process but at the end of the second day we began to have ambitious ideas. Wyatt had begun his ascent and ultimately defeated four higher rated players including both of last year’s co-champions. The games were all dramatic and featured daring attacks that resulted in both players walking on a precipice. In a couple of key moments, luck would be on Wyatt’s side as he would turn the tables from a dangerous position. But of course, luck is when opportunity meets preparation! The preparation that we performed for the event was no different from previous events and previous years: there is a strong team-oriented approach. First off, the teammates are very friendly and close and frequently coordinate their travels and participation in local tournaments. There is a definite presence of friendly rivalries; while everyone strives to win and be the top-rated player in the grade or school, there is no hesitation in congratulating or supporting one another following a brilliant or disappointing result. In short, everyone wants to beat each other but also root for one another to succeed! Training sessions are always conducted in a group setting; for example, a common scenario will be the review and discussion of instructive games played by the students followed by multiple training games. Students constantly work together and construct of a team identity and philosophy to play confidently, aggressively, and quickly (and don’t forget to blunder check)! Our team was able to overcome the odds by embodying the most positive aspects of these ideas. The last round game which Wyatt chose to annotate is a good example: White comes out swinging and the position’s complexity causes both players to trade errors. However, the continuous pressure ultimately claims Black as victim as Wyatt alertly spots a finishing tactic in his opponent’s time trouble. At the end of the tournament, Wyatt was the National 7th Grade Champion with a perfect 7-0 score and IS318 had won the team title by half-point over Hunter. A team win is a team effort and everyone in the team room contributed to achievement through their support. Aayushma Rai had a terrific finish to place 8th in the country and Ellis Wong kept the team motivated and electrified through his three upsets. Furthermore our 6th and 8th grade teams exceeded expectations in their own right, all the while cheering their peers on to keep going. And speaking of team effort, I want to shoutout all the IS318 parents and Coaches Elizabeth Spiegel, John Galvin, and Danny Feng for being awesome.  To be honest, I did not predict such a result, I’m not sure anyone did! But it certainly demonstrates that effort and preparation can lead to quite surprising results :).