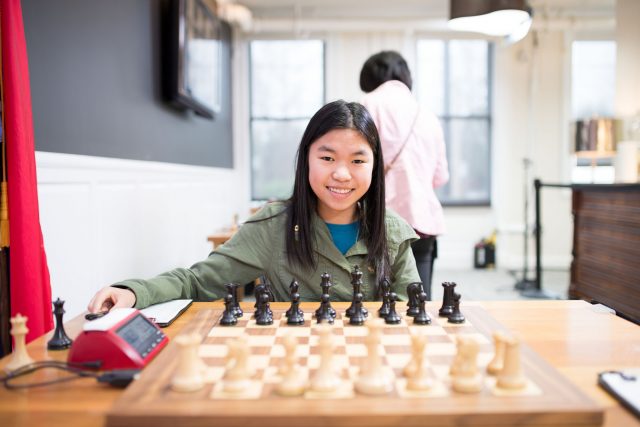 Carissa Yip at the 2017 US Women's Championship. Photo: Austin Fuller
After the Philadelphia International, the next event in the World Open series is the Women’s Championship.  The last rounds of the International actually overlap with the Women’s Championship, so several players had to make a choice.  The top three seeds in the Women’s Championship chose both as they played the first seven games in the International and then moved to the Women’s.  They were the three favorites to win the top three prizes, and that is exactly what happened – though perhaps not exactly how one might have predicted. FM Carissa Yip was having an average International at 3 ½ out of 7 and was unlikely to make a norm, so she withdrew from that event and entered the Women’s as the top seed.  She was over 200 points higher rated than second seeded Tsogsaikhan Saikhanchimeg.  However, Saikhanchimeg is fresh off winning the US Women’s Open with a 5-0 score, and these players drew in round two of the international, so the result was not a foregone conclusion. The third seed in the Women’s event is Badamkhand Norovsambuu.  Saikhanchimeg and Norovsambuu always planned on playing in the Women’s and signed up for half point byes in the International.  In addition to these three, there were three other well known women over 2000:  Angelica Chen, Sandhya Goli, and Aasa Dommalapati as well as WIM Shernaz Kennedy and Rachael Lee among the 19 Women. The 19 entries is roughly the same as last year’s 18 players.  With a $2500 guaranteed prize fund, this is certainly a good value for those who are eligible. In the first round, there were several surprises.  Second seeded Saikhanchimeg lost to Aviva Smith, and 5th seed Sandhya Goli drew with Katherine Chen. Perhaps because of results like that, Carissa Yip must have been confident in winning the event because she signed up for a last round half point bye, even though she had no other conflict as far as travel or tournament.  In round two, there were more surprises as Saikhanchimeg drew with Rachael Lee and Norovsambuu drew with Michelle Morris.  Carissa Yip played 6th seeded Aasa Dommalapati and won so there were only 2 players t 2-0:  Yip and Angelica Chen.  These two played in round three with Yip winning to be the only 3-0.  At this point, everything was going according to plan for Carissa. In round four, Carissa ran into a slight problem.  Carissa was 3-0 and was paired with the top 2 1/2: Badamkhand Norovsambuu.  Unfortunately for Carissa, the game ended in a draw.  With Carissa having a last round bye and only being a half point up, Carissa no longer controlled her own destiny.  Any of four players could now win the tournament: Yip, Norovsambuu, Sandhya Goli or Gracy Prasanna. In the penultimate round, both Yip and Norovsambuu won.  Yip defeated Sandhya Goli while Norovsambuu defeated Gracy Prasanna.  With the half point bye, Yip was now guaranteed a tie for first, but Norovsambuu could catch her by winning the last round. Norovsambuu won in one of the first games to end, so there would be a tie for first.  The only question would be who would win the plaque on tiebreaks.  Unplayed games normally kill one’s tiebreaks, so I thought for sure Badamkhand would get the plaque.  Badamkhand entered the last round with a big tiebreak edge because of Yip’s unplayed game.  In order for Yip to win on tiebreaks, her opponents would have to all win, and Badamkhand’s opponents would have to all lose.  Amazingly, that is what happened and Yip edged Badamkhand by half a tiebreak point!  Each player though won $750. Three players tied for third with 4-2.  Gracy Prasanna is under 2000 and took the $300 Under 2000 prize.  Saikhanchimeg Tsogtsaikhan and Angelica Chin split third place winning $125 each.  Diana Suralik and Sarah Yan scored 3-3 to split the under 1700 prize winning $125 each.  Karen Boyd won the $200 Under 1400 prize also with 3 points.  Elena Shtyker won the Under 1200 plaque with 2 points. Bob Messenger directed for Continental Chess Association.  He was assisted by David Hater, Brian Yang, and  Andy Rea. The World Open Action Championship was held on July 3rd.  Attendance was disappointing as the prize fund was based on 100 entries, but there were only 45 players.  However, 2/3rd of the prize fund was guaranteed, so there would still be a very good prize fund. There were four sections: Premier, U2200, U1800, and U1400.  The Premier section round one had 15 players, but 7 were GMs and 1 IM!  This meant in round two GMs were being paired up and from round two on GMs were playing other GMs.  In the last round, GM Max Dlugy got the full point bye! GM Anton Kovalyov scored a perfect 6-0 to take the $667 first prize.  He had to beat IM Justin Sarkar, GM Bilel Bellahcene, GM Tigran Petrosian, and GM Max Dlugy enroute to his payday.  GMs Tigran Petrosian and Thal Abergel scored 5-1 to win $266.50 each. In round two, GM Ballahcene turns in a nice miniature versus Nikhil Kalyanraman. However, Ballahcene was not as fortunate in round 3 versus Kvalyov. By round six, half the players withdrew.  Virtually all the players who were not in contention for a prize didn’t play the last round.  That coupled with a 15 player, five round section made for tricky pairings.  In the last round, Kovalyov faced NM Arthur Macaspac and completed his perfect score with this game. Steve Immitt directed for Continental Chess Association.  He was assisted by Brian Yang and  Andy Rea. Most of the side events had sub-par attendance this year (perhaps because July 4 falls on a Wednesday), but the side event that typically draws well is the Under 13 year old tournament.  This event was held in four sections: Open, Under 1400, Under 1000, and Under 600.  There were a total of 162 players in these four sections, which was actually an increase from last year.  Part of the reason for the popularity of this event is the winner of each section receives free entry in all CCA events for six months! The section winners were:

Evan Park on tiebreak over Hersh Singh and Advaith Vijaykumar, 5-1

Bob Messenger directed for Continental Chess Association.  He was assisted by Harold Stenzel  and  Harold Scott. Another small side event is the Monday Quads held on July 2, as a side event which were won by:  Quad 1 Jonathin Chin with 2-1 $60, Quad 2 Kaden Pollard 2 ½ - ½ $60, and Small swiss John Sprague 2 ½ - ½, $60. The top section of the main event of the World Open begins on July 4th.  You will be able to follow the games on followchess.com.          Full tournament details including a list of all winners can be seen at http://chessevents.com/worldopen.  Previous Continental Chess tournaments can be found at the Continental Chess website at  http://www.chesstour.com/cross.html.
SHARE: