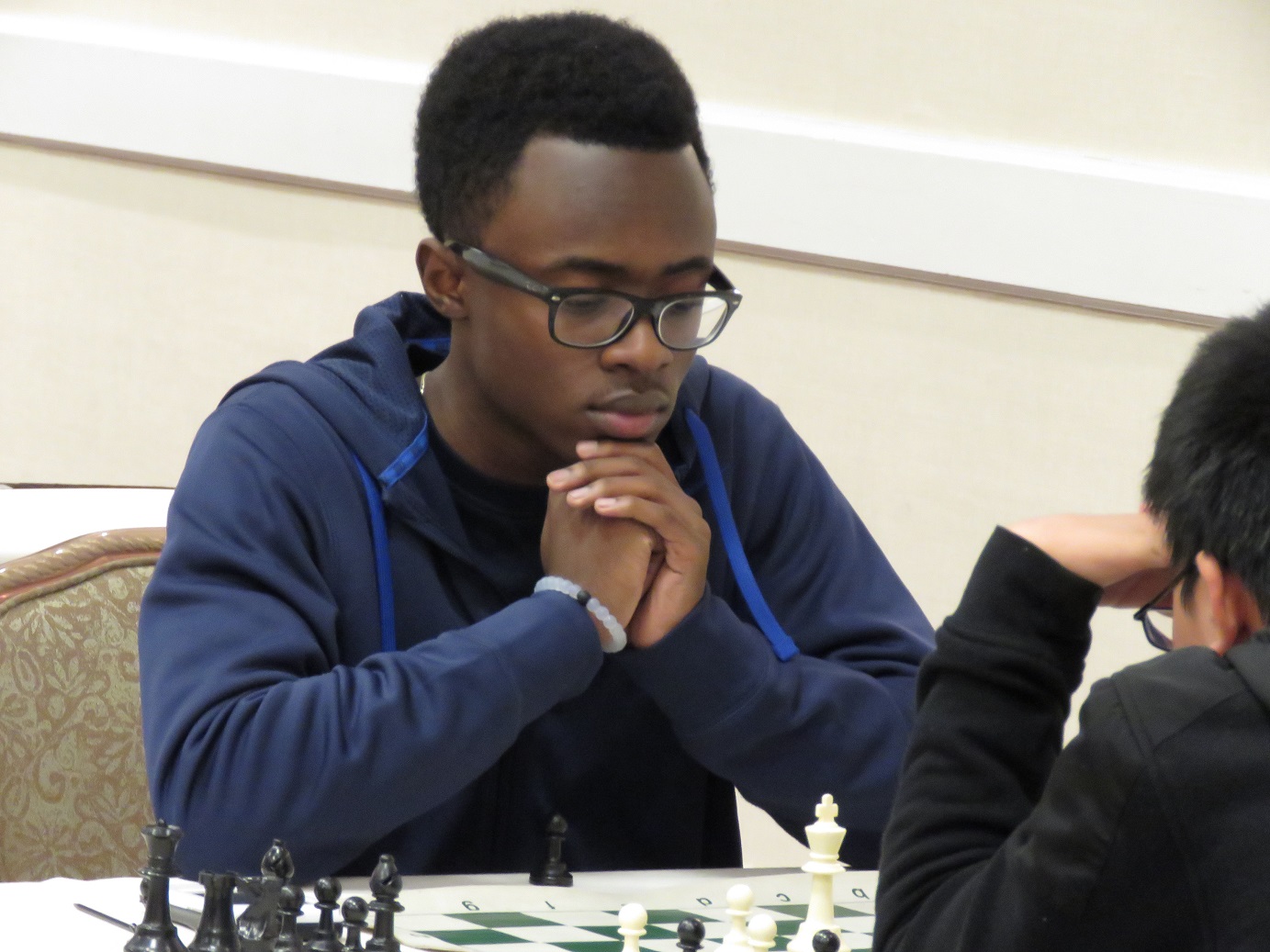 Josh Colas, Photo Tim Hanks
Philadelphia — One of the things that 17-year-old Joshua Colas wanted to achieve shortly after he graduated from high school this past spring was to attain the rank of International Master. Colas accomplished that goal* here over the Fourth of July weekend at the World Open, which drew approximately 1200 players from around the globe — including 33 GMs and members of 34 different chess federations — to compete in the grueling, nine-round, high-stakes tournament that organizers said offered the biggest cash payout in its 44-year history. “It’s amazing. It feels good,” Colas said of making his second IM norm, which — along with an IM and GM norm he earned at the North American Open this past December — he can now invoke to lay claim to the IM title. The distinction comes at a particularly salient time in Colas’ life as he prepares to join chess powerhouse Webster University this fall to play under the tutelage of GM Susan Polgar. Colas said his Round 9 game against GM Gergely Antal proved critical in his IM quest. “I was actually worse the whole game,” Colas said. “I was kind of feeling down. I thought I would not have a norm. I thought I had to wait until the next tournament.” But Colas kept fighting. And even though he was down on material, Colas managed a promotion threat that provoked Antal to give sacrifice material himself. “I had a deadly passed pawn on the sixth rank and his pieces were passive. My king was active as well as my rook and knight,” Colas explained. “He had to sack his Bishop.” “I feel very accomplished,” Colas said of achieving IM on the cusp of his college career. “I just feel blessed and I have more things to look forward to when I’m out there,” he said of Webster. *Contrary to what was reported earlier this month, National Master Joshua Colas still has to secure one more IM norm in order to be eligible for the IM title, according to an arbiter and Colas. US Chess regrets the error. Interestingly, several players in the winner’s circle of the open section of the tournament also have ties to Polgar. 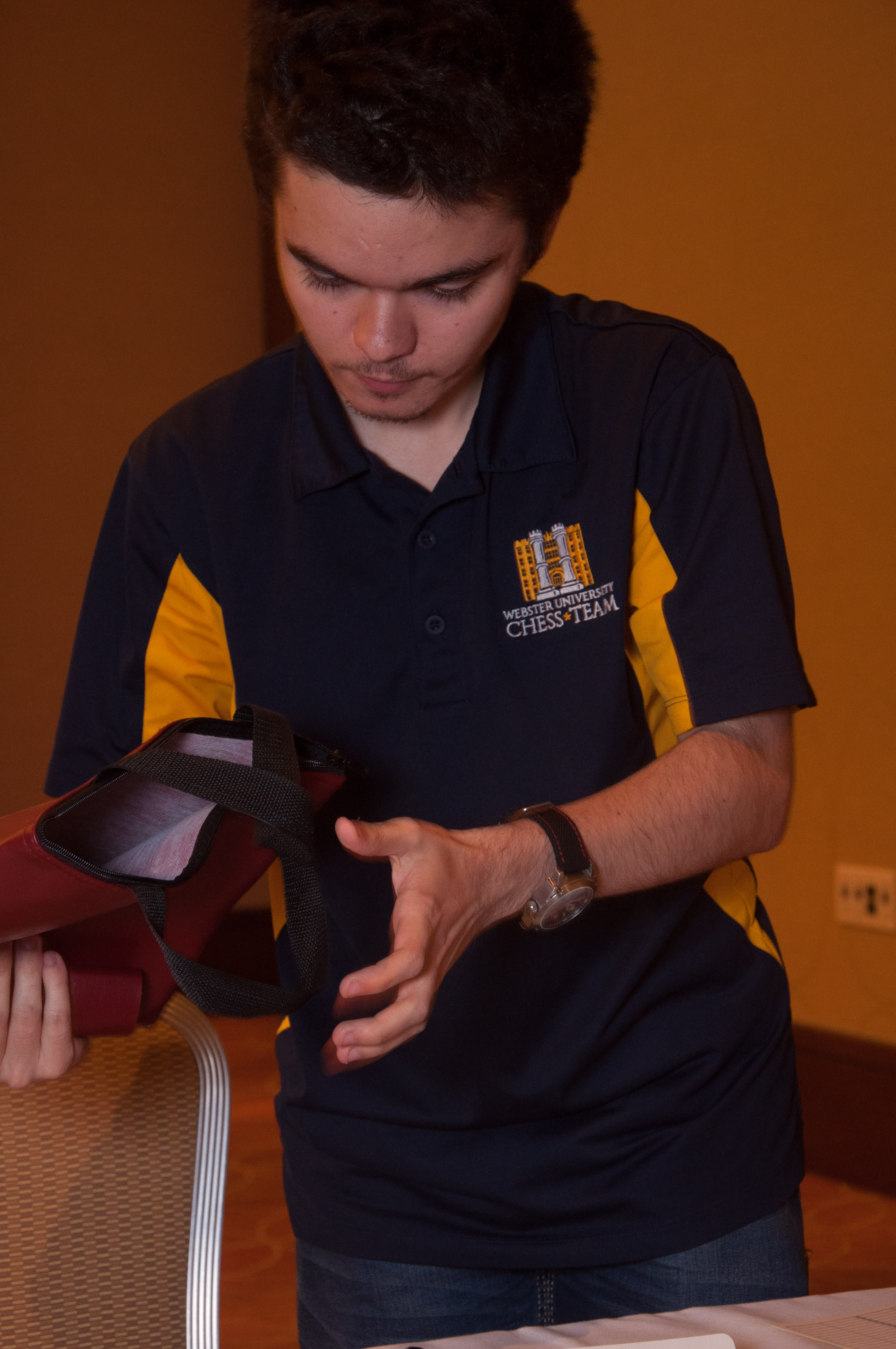 GM Illia I. Nyzhnyk, Photo Jim Doyle
They included GM Illia I. Nyzhnyk, a Webster University player and computer science major, and GM Gabor Papp, who flew in from his native Hungary to play in the World Open, as well as the Philadelphia International this week (July 5-10), and then to teach chess to kids at a summer camp run by Polgar in St. Louis. Papp also played for Polgar for a year back when she coached at Texas Tech and Papp attended the school on a yearlong scholarship. Nyzhnyk — who sported a Webster University polo-style shirt — also counted his last game as his most critical. “I was able to get an advantage with the white pieces,” Nyzhnyk said. “It actually surprised me because I couldn’t get any advantage in any of the other eight games I played. Getting an advantage for the opening was great.” He said the game went downhill for his opponent after his opponent blundered a pawn. 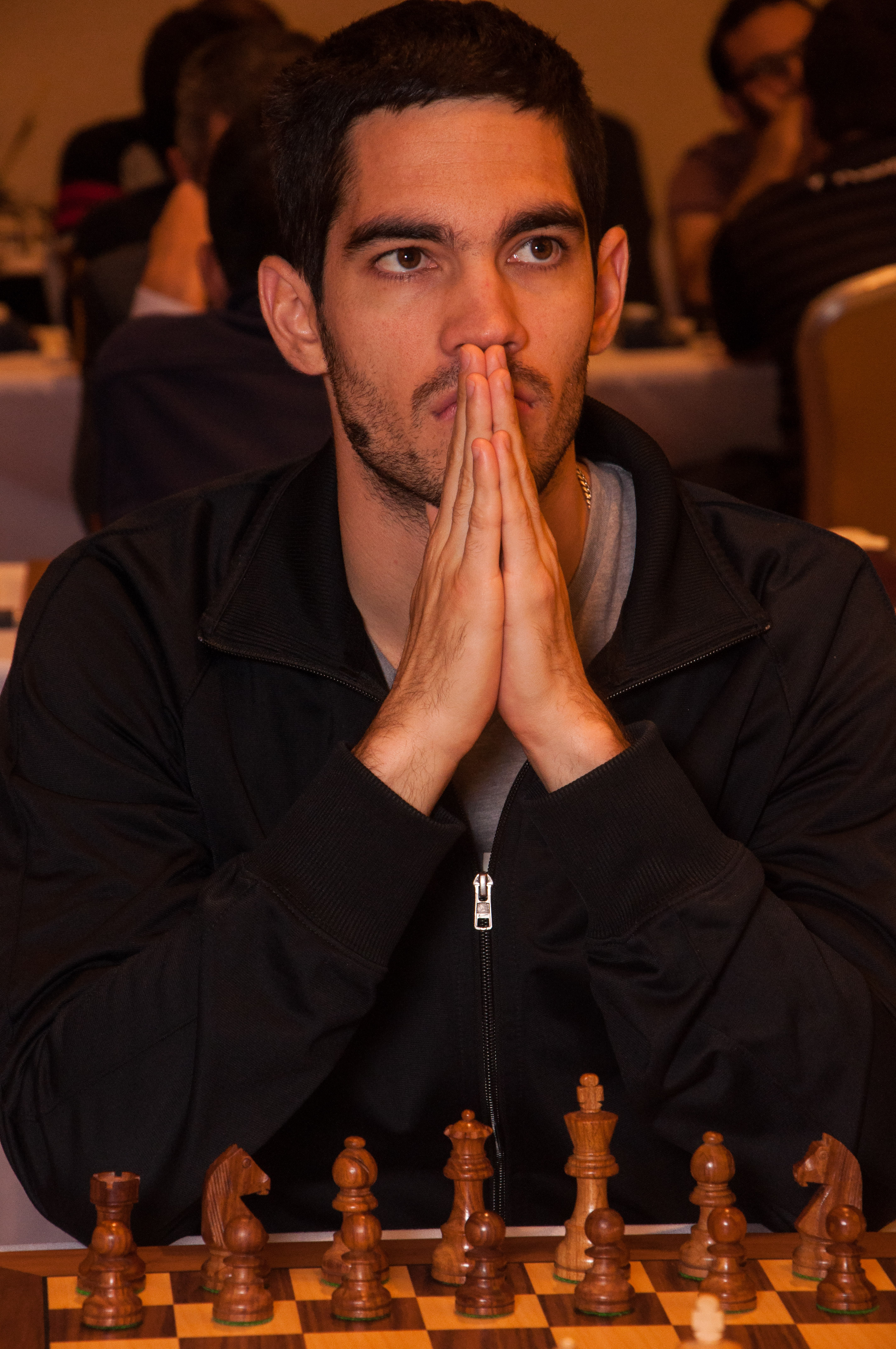 Gabor Papp, Photo Jim Doyle
Papp said one of his most complicated and interesting games was the Round 5 game he drew against GM Tamaz Gelashvili. 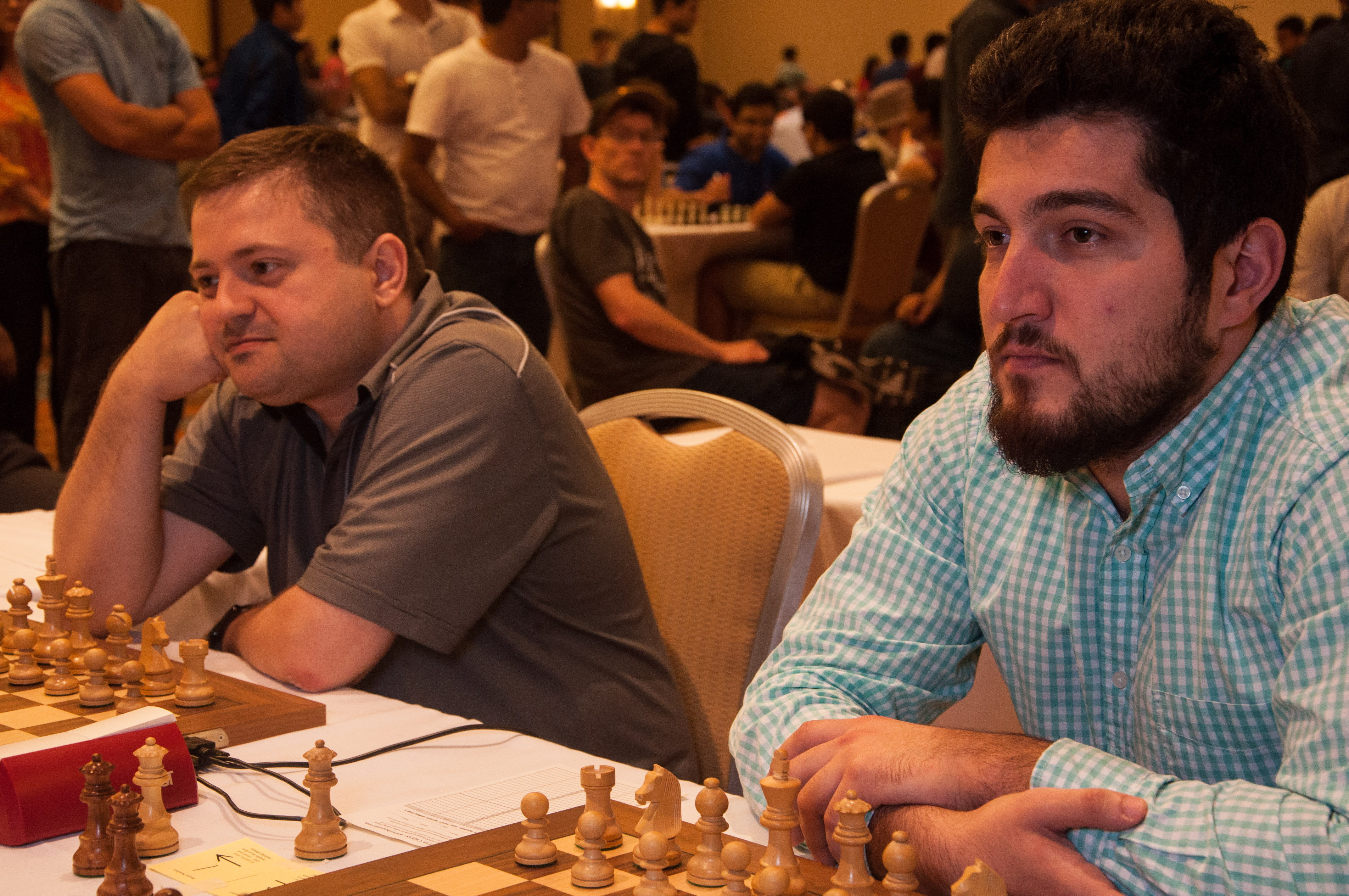 GMs Gelashvili and Durarbayli, Photo Jim Doyle
Gelashvili said the main reason he competed in the World Open was to prepare for the 42nd Chess Olympiad in Baku this September. “This is like preparation for that,” Gelashvili said. “The Georgia federation invited me to play, so I decided to practice by playing in the World Open and then I will play two or three more tournaments just to stay in shape.” Gelashvili said one of his most critical games was his Round 4 game against GM Varuzhan Akobian, a former first place winner of the World Open. Gelashvili said he decided to play the well-known Lasker sacrifice — a 19th-century double Bishop sacrifice meant to expose the enemy King. “I’m pretty sure he knew this idea but he just kind of forgot,” Gelashvili said. Besides Nyzhnyk, Papp and Gelsashvili, the other GMs who tied for first place were GM Victor Bologan, of Moldova (corrected from an earlier version of this article); GM Vasif Durarbayli of Azerbaijan; GM Gil Popilski, of Texas; and GM Alex Shimanov, of Russia. They all won $5800. Papp won an extra $500 on tiebreaks. Besides Colas, nine other players earned norms at the 2016 World Open. Specifically, Andrey Gorovets and Razvan Preotu, earned GM norms; and Nicolas Checa, Vignesh Panchanathan, Kevin Wang, William Morrison, Levy Rozman, Nasir Akylbekov, and Atulya Shetty all achieved IM norms. The World Open proved quite fruitful for 9-year-old Prince Eric Guipi Bopala, of Quebec. CLO readers might recall that we introduced Bopala during last year's World Open when tournament directors bumped him up from the 1400 to the 1600 section because they  deemed his 1390 rating from Quebec to be “deflated.” While Bopala wasn’t quite ready for the U1600 last year, scoring just 2.5 points out of 9, this year, he scored an impressive 7 points out of 9 in the U1800 section, finishing in the top three under 1700 players in the section. Prince — a native French speaker — said he puts in about two hours per day of chess play and study. He attributes his success in the World Open to doing defense problems and playing and doing exercises on chess.com. While the World Open inspired a lot of players to put in a lot of hard work and preparation, the $225,000 prize fund also attracted a few individuals who tried to take shortcuts. One of the most egregious incidents involved a player in the U2200 section who got caught in the tournament bookstore peering at the pages of Parimarjan Negi’s 1.e4 vs The Sicilian II during a game in which — lo and behold — he was playing with the white pieces against an opponent who was playing the Sicilian. Tournament directors were made aware of the situation by the father of the cheater’s opponent, who snapped a photograph of the cheater reading the Sicilian book and presented the evidence to tournament directors, who forfeited his game and disqualified him from winning any prizes. Tournament officials say the cheater admitted to his misdeeds and apologized. “You get those in every big money tournament,” said assistant tournament director David Hater of the Continental Chess Association, which organized the event. “When you put a quarter of a million dollars on the table, you’re going to get some unethical people,” Hater said. “Ninety-nine percent of the people here are ethical people. One percent are not. The problem is we don’t know which one percent until they do something wrong.” But once alleged wrongdoers are identified, Hater said, CCA officials promptly and thoroughly investigate the claims, and, if they prove factual, they lay down the law. Look for more comprehensive coverage of the 2016 World Open — and the bookstore cheating incident involving the Sicilian — in an upcoming edition of Chess Life Magazine. Jamaal Abdul-Alim can be reached at dcwriter360@yahoo.com or you can follow him on Twitter @dcwriter360.
SHARE: