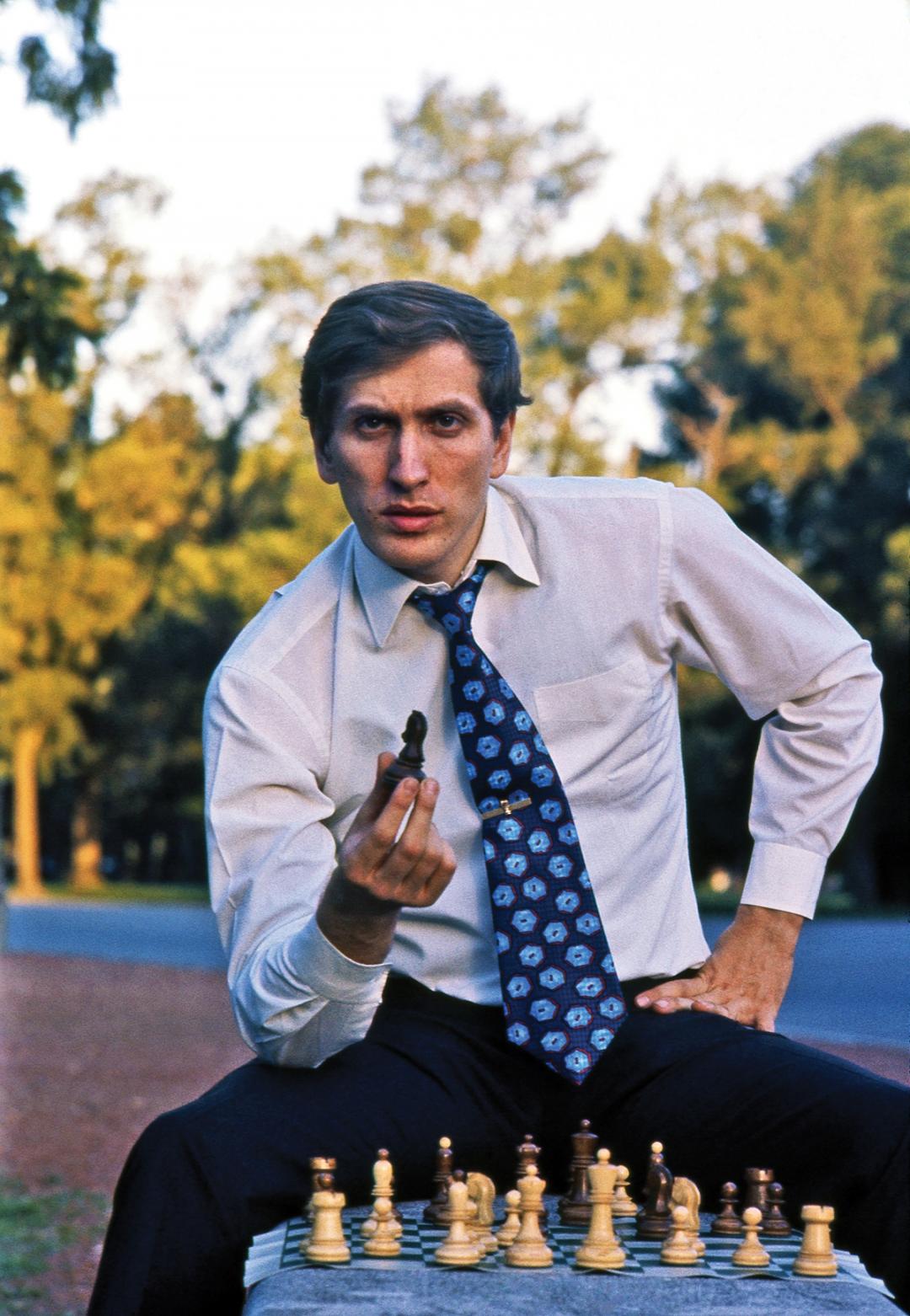 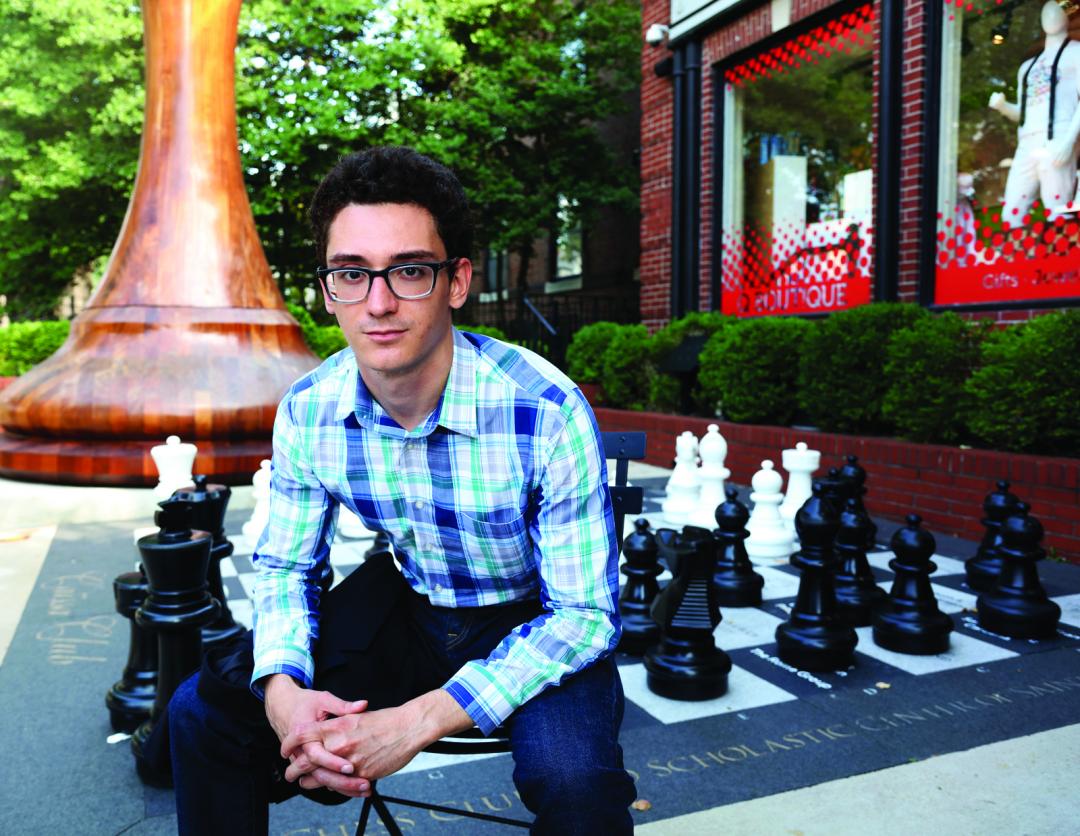 Harry Benson CBE, Fabiano Caruana on the Patio at the World Chess Hall of Fame, 2018, Collection of the World Chess Hall of Fame, © Harry Benson CBE
SAINT LOUIS (September 27, 2018)–A new exhibition celebrating the renowned photographs of Harry Benson CBE, Harry Benson: Kings & Queens, will open this fall at the World Chess Hall of Fame (WCHOF) on Friday, October 5, 2018. Kings & Queens showcases a collection of photography portraying World Chess Champions Robert “Bobby” Fischer and Boris Spassky, current top American chess players Fabiano Caruana and Hikaru Nakamura, reigning World Chess Champion Magnus Carlsen, American presidents, British royalty, and newly-commissioned work from this summer’s 2018 Sinquefield Cup, an elite chess event featuring 10 of the strongest chess players in the world. “Since our first collaboration, the 2012 exhibition Bobby Fischer: Icon Among Icons, I’ve been excited about the possibility of working with Harry again,” Chief Curator Shannon Bailey said. “It is interesting to see how he captured the rivalry between 2018 Sinquefield Cup competitors Fabiano Caruana and Magnus Carlsen, especially with the world chess champion title on the line this November.” The exhibition is a legendary compilation of images spanning Benson’s 60+ year career, highlighting rare, behind-the-scenes shots of infamously reclusive Bobby Fischer, who befriended the celebrated photographer while he covered Fischer’s world chess championship run in the 1970s. Solitude and silence grip the viewer in Fischer Alone at Night in Buenos Aires, which portrays Fischer sitting alone on a park bench in near darkness, bathed only in the faint glow of nearby streetlamps. In contrast, Bobby Kissed by a Horse offers a more revealing perspective, showing Fischer’s fondness for animals as a horse affectionately nuzzles his face. “[Bobby] was an amazing chess prodigy and the most extraordinarily complicated and fascinating person I have ever met,” Benson said. “And I feel privileged to have been one of the few he chose to let into his life.” Additional photographs of iconic figures will round out the exhibition including images of Sir Winston Churchill, Dwight D. Eisenhower, Queen Elizabeth II, Charles de Gaulle, Lyndon B. Johnson, Bobby and Jackie Kennedy, Barack Obama, Prince Phillip, Ronald and Nancy Reagan and Donald Trump, among others. Harry Benson: Kings & Queens will be on display at the World Chess Hall of Fame from October 5, 2018, through March 24, 2019. Media interviews with the curator can be scheduled by contacting Brian Flowers at (314) 243-1571 or brian.flowers@worldchesshof.org. # # # About the World Chess Hall of Fame The World Chess Hall of Fame (WCHOF) is a 501(c)(3) nonprofit organization committed to building awareness of the cultural and artistic significance of chess. It opened on September 9, 2011, in the Central West End after moving from previous locations in New York; Washington, D.C.; and Florida. The WCHOF is located at 4652 Maryland Avenue, housed in an historic 15,900 square-foot residence-turned-business, featuring World Chess Hall of Fame inductees, United States Chess Hall of Fame inductees selected by the U.S. Chess Trust, displays of artifacts from the permanent collection and exhibitions highlighting the great players, historic games and rich cultural history of chess. The WCHOF partners with the Saint Louis Chess Club to provide innovative programming and outreach to local, national and international audiences. About Harry Benson CBE Scottish-born photojournalist Harry Benson CBE gained fame while on assignment to photograph the Beatles in 1964, capturing their iconic pillow-fight scene. His work ranges from photographs of world leaders to pop stars, all portrayed with an immediacy and naturalness that speaks of a confidence and rapport between sitter and photographer. Benson has photographed every United States president from Eisenhower to Trump; was feet away from Bobby Kennedy the night he was assassinated; in the room with Richard Nixon when he resigned; on the Meredith March with Martin Luther King, Jr.; and was present when the Berlin Wall went up and when it came down. On January 1, 2009, Benson was appointed a Commander of the Order of the British Empire (CBE) by Her Majesty Queen Elizabeth II. Benson was under contract to LIFE magazine from 1970 until it closed in 2000. In addition, he has worked for The London Sunday Times, Vanity Fair, Time, Newsweek, Architectural Digest, Quest and People magazine—impressively shooting over 100 covers for the magazine. Benson has had over 40 museum and gallery solo exhibitions and 16 books of his photographs have been published, including Bobby Fischer (2011), New York, New York (2011), The Beatles on the Road, 1964-1966, which celebrates the 50th anniversary of the Beatles coming to America (2012) and the recent Harry Benson: Persons of Interest (2017). Benson has a new book, Paul McCartney which will be published by Taschen in the spring of 2019. In 2017, Benson was inducted into the International Photography Hall of Fame in Saint Louis, Missouri, and received the Lifetime Achievement Award at the International Center of Photography in New York. Benson has also received an Honorary Doctorate from The Glasgow School of Art, Glasgow University; St. Andrews University, Scotland; and Glasgow Caledonian University. Harry Benson: Kings & Queens is generously supported by Emerson. Financial assistance for this project has been provided by the Missouri Arts Council, a state agency. For more information, please visit the World Chess Hall of Fame online at www.worldchesshof.org or call (314) 367-9243 (WCHF). Visit our social channels: Facebook (@WorldChessHOF), Twitter (@WorldChessHOF), Instagram (@worldchesshof), and YouTube (/worldchesshof) Exhibition hashtag: #BensonKingsQueens; Benson’s Instagram: @harrybensoncbe
SHARE: