Who Is Fabiano Caruana? 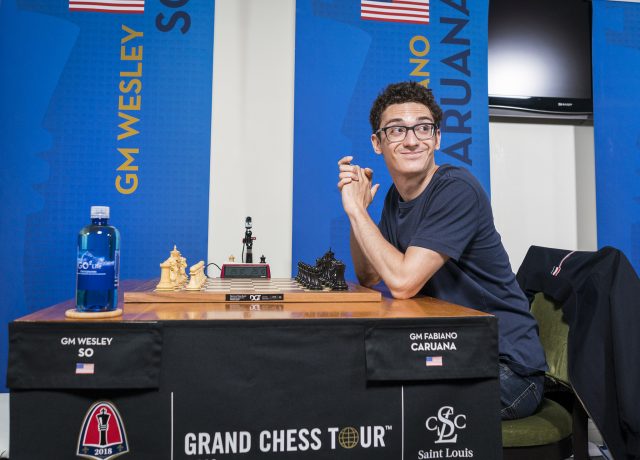 Photo: Lennart Ootes
The much-awaited World Championship Match where Fabiano Caruana challenges Magnus Carlsen, begins in a little over 2 weeks. Many, including myself and Carlsen himself, have long believed Caruana to be Carlsen's most formidable rival for the highest title in chess. In fact, at this time, Caruana is within a mere 3 rating points of overtaking Carlsen's #1 spot in the live world rankings. As we anticipate this epic match-up, let's take a closer look at the players, starting with the American Challenger. We all know of Fabiano Caruana as the confident yet mild-mannered elite chess player, the 3rd highest ranked player in history, and 2014 Sinquefield Cup sensation, but who is he beyond his many competitive chess accomplishments?

"In 2018, a year in which he scored the biggest triumph of his chess career by winning the Candidates, Fabiano made an afternoon appearance. He was in the middle of a brief stay in New York before heading to Norway Chess (which he won!). In fact, his flight was that very evening, yet here he was in front of a starstruck audience. For any teachers reading this, you want to know the best way to get students to line up silently in a single file? Bring in the idol of every kid in attendance. Fabiano had only agreed to take part in a special match for charity, but the world’s second-highest-rated player is as kind-hearted as they come. He signed dozens of autographs and took photos with anyone and everyone who asked." -Robert Hess, "Robert Hess on Charity Chess: $56,000 Raised" 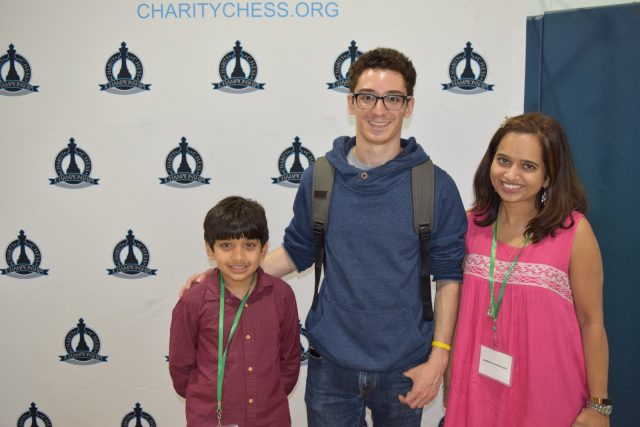 Fabiano Caruana with Vivek and Sarbani Chaudhuri, who contributed greatly to the success of the Charity Chess Championship. Photo courtesy of Mero family.

"Our second annual tournament was held on Sunday, May 20, 2018 with a special appearance by World Championship Challenger GM Fabiano Caruana.  We raised over $56,000 which will be donated to Mount Sinai Hospital's Ovarian Cancer Translational Research Laboratory, a genomic research program dedicated to uncovering the genetic basis for the early detection and prevention of ovarian cancer." -Charity Chess

"I traveled to New Jersey to visit the Liberty Science Center and serve as ambassador for LSC’s Chess Works!, an after school chess program, with a special focus on reaching kids in at-risk communities. I got a chance to see the amazing facilities and exhibits at LSC and faced off against a group of kids from the Avenues school, who put up a tough fight but ultimately succumbed to checkmate. I was most impressed by their enthusiasm and passion for the game. That was good preparation for the simultaneous exhibition the next day, where I faced 23 opponents at once. The games were close, especially against some of the younger participants, and I was thrilled to finish with 23 wins. The highlight of the night, however, was watching David Blaine perform card tricks, which to me is pure magic." -Fabiano Caruana, "Fabiano Caruana reflects on Chess and Magic"

"Chess is so much more than a game for these kids. It challenges their critical thinking, motivates them to problem solve in other areas of their lives and provides a safe, educational outlet after school." -Nick Ragone, Chief Marketing and Communications Officer of Ascension, the largest non-profit health system in the country

In 2017, Fabiano Caruana made the prestigious Forbes' 30 Under 30, an annual list, showcasing "600 of the brightest young entrepreneurs, innovators, and game changers" in 20 industries. https://twitter.com/LibertySciCtr/status/816786482954465280 Caruana made the list in the Games category and was the first professional chessplayer to make the list. https://twitter.com/FabianoCaruana/status/880087107083145216

"When I’m at home, it’s pretty chilled. Like, I’ll work on chess probably a few hours a day, but I might, you know, go to the movies, or I might meet up with friends, get drinks, do whatever." -Fabiano Caruana, "Fabiano Caruana Tells Us What the Life of a Chess Grandmaster Is Really Like"

“THE BEST CHESS player in America is a 26-year-old wunderkind from Brooklyn who loves Game of Thrones and David Lynch movies.” -Mickey Rapkin, “A Day in the Life of Chess Grandmaster Fabiano Caruana”

What is your favourite Rolling Stones song?

Probably “Sympathy for the Devil.”

"I wanted to get back to the place which felt most like home to me." -Fabiano Caruana on his return to the United States in 2015, "Long"> Story Short: In Conversation with Fabiano Caruana"

Either Finding Nemo or Finding Dory.

Eternal Sunshine of the Spotless Mind.

What are you reading right now?

I’ve been trying to do a book a month, and in the past month I haven’t read anything. The last book I read was Phil Gordon’s Little Green Book on poker. My favourite book of the past year was The Three-Body Problem [by Liu Cixin]. I only read the first part, but I thought it was really interesting.

Pick one country from each continent that you would most like to travel to.

I definitely want to visit Australia, I’ve wanted to go there for a long time. In Asia I would say Singapore, I’ve heard that it’s beautiful and has amazing weather. In Africa, South Africa or Egypt. I’ve pretty much been everywhere in Europe, so I’ll have to pick a place I haven’t been, so I’ll say Finland. I’ve been everywhere in North America. In South America, maybe Peru.

https://twitter.com/LibertySciCtr/status/733792097887784960   What are your thoughts on Fabiano Caruana outside of chess?     Stay tuned for our upcoming World Championship preview coverage, including Magnus Carlsen beyond chess, a comparison of Caruana's and Carlsen's strengths and weaknesses, a look at their past games, and GM Ian Rogers' preview.