WFM Nastya Matus: A Hidden Gem in the Chess World

FMs and WFMs are the hidden gems of the chess world. Overlooked as the world focuses on GM and IM games, FMs and WFMs are more relatable to the common mortal like me, an untitled player. I went to the 2022 Chicago Open and sat down with 17-year-old WFM Nastassja “Nastya” Matus, a former second-string player on the Minnesota Blizzard in the PRO Chess League. 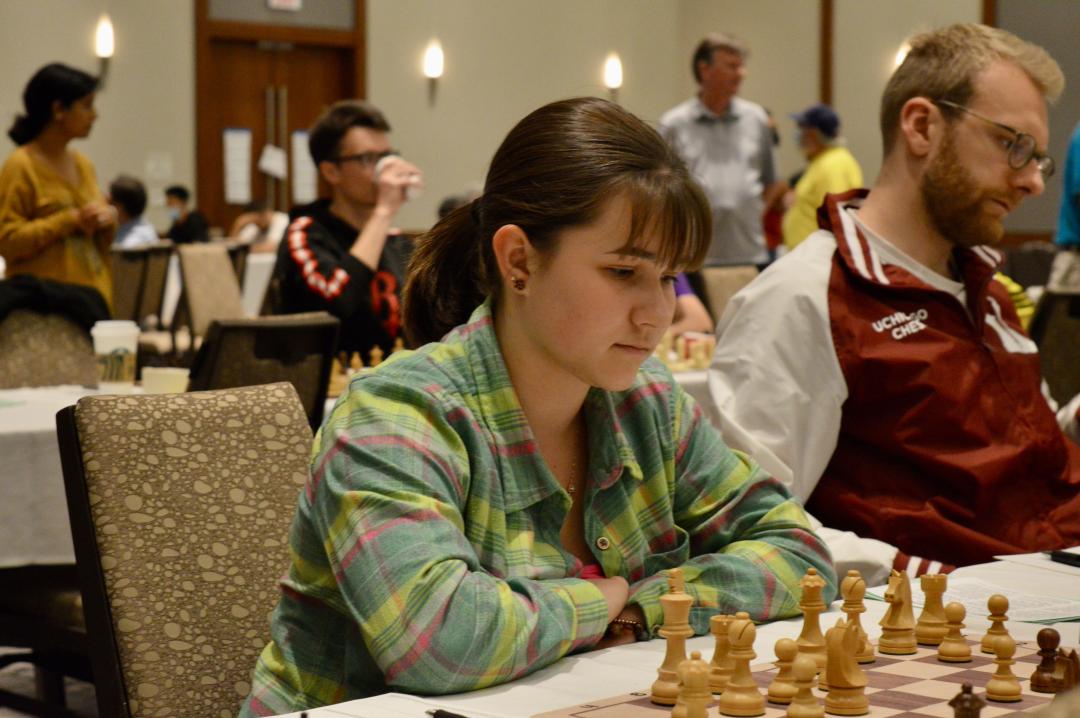 Nastassja (pronounced “Nass-tass-ia”) finished the tournament scoring 3 out of 8. This is a remarkable feat considering she was in the open section and outperformed 11 players who were rated higher than her. And as the cherry on top of the cake, she drew with FM Eugene Yanayt.

Hennessy: How’s the Chicago Open going for you so far?

Matus: Pretty solid, I guess. 1½ out of 4. I’m playing a lot of people who are higher rated so I’m more focused on how I’m playing than the results. Pretty happy so far.

Very wise. Alright, let’s get to some personal stuff. You were born in Minnesota and have Russian heritage?

You’re at Wayzata High School while taking college math classes at the University of Minnesota right now, so one might say you’re giving a simul, no?

(Gives a pity laugh.) I actually finished that program last year so this year all my classes are at the university. But I don’t yet have my diploma.

That’s impressive. What is your proudest accomplishment in chess?

Probably second place at the 2017 World Youth Championship for girls under 12.

You were invited to go to World Youth again this September in Romania. Will you be playing there?

I might. It’s the first two weeks of classes so I need to email my professors. But if it’s doable, I will make up the work and go. I’m taking labs and stuff so I don’t know if my professors are gonna be fine with me missing school.

Yeah, that’s stressful. I saw an interview with Carissa Yip where she said three of her friends didn’t come to the tournament she was at because of school. How do you balance travel with school?

What’s the largest prize you’ve ever won from chess?

I won a full scholarship for four years at Webster University, but the offer may have expired. I earned it by getting first place at the Susan Polgar Foundation Girls’ Invitational (SPFGI).

I would email [Webster University] and say, “Hey, remember that $100,000 you offered me? Soon I’m going to be old enough to attend college and I’d like to accept.” Earlier you mentioned you stopped playing competitively for a while, what brought you back?

I wanted to get back sooner but there were no tournaments anyways because of COVID so I had to wait another year and a half before I could actually start playing. I played for my high school team while I was on break, but that’s about it. It was weird not playing at bigger tournaments. Chess was everything I did.

I feel that. Are you still Chess Club Co-Captain at Wayzata High School?

Yea, and I’ll be Captain next year. I coordinate teams for our online league, and occasionally I teach the members a few things; they’re mostly under about 1200.

It sounds like that school has produced a lot of good chess players for some reason.

Yea, Andrew Tang became a GM during high school there.

Do you have any advice for players hoping to become a WFM like you did?

Just study and play a lot.

Have you experienced sexism in chess?

Not directly, but I think a lot of people assume I’m not as strong [because I am a female player]. They see a little girl and think, “Oh. Easy.” You know. But I don’t feel excluded.

And then you beat them.

Mental health is really important in chess; how do you approach losing?

A loss is upsetting, and it can affect your entire tournament after that. I think it’s difficult for anyone not to pay attention to losses.

Yea, even for Magnus Carlsen.

Right. Before it definitely affected my mental state a lot more than it does now. But after I took a break, it’s more chill now -- you have to just focus on the next game.

Time for some bullet questions. What’s your favorite chess book?

I’ve read a lot… “My System” by Aron Nimzowitsch was a good book though.

Maybe “Queen of Katwe” or “Searching for Bobby Fischer.”

I don’t know any. Well, there’s one, but it’s only chess-related because it was playing at World Youth before every round: “Best Day of My Life” by American Authors.

Nastya was kind enough to annotate her win from the third round against Sridhar Seshadri, Founder and President of the Sri Chess Academy in Washington state.