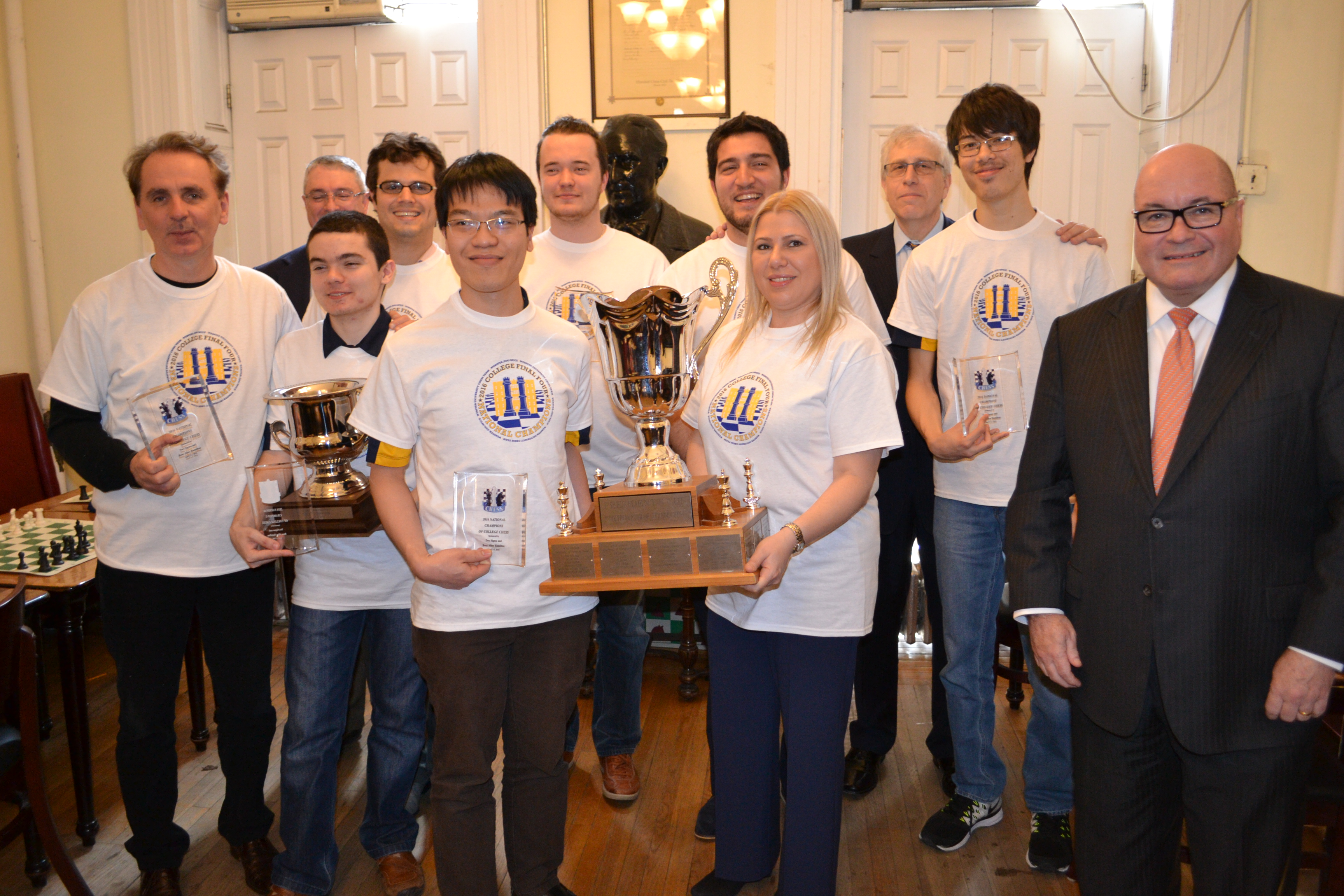 This weekend Webster University packed even more history into the memorabilia-covered walls of New York City’s legendary Marshall Chess Club. Since the formation of the St. Louis suburban university’s chess program in 2013, Webster has won the annual national championship playoff, the Final Four of College Chess, every year. No other team can make that claim. This weekend, Webster did it again, making it four in a row. One key to the Webster victory was the 3-0 performance of its ironman on board one, GM Le Quang Liem, who dismissed, in order, Columbia’s IM Arthur Shen, UT-Rio Grande Valley’s GM Anton Kovalyov, and Texas Tech’s GM Yaro Zherebukh. Webster’s GM Ray Robson trailed Liem’s result by a mere half-point, drawing only Texas Tech’s IM Andrey Gorovets in the last tense round.

All five of the Webster team members who played made positive scores. Since the team-on-team playoff  began in 2001, only one other college, the University of Maryland-Baltimore County, has equaled Webster’s streak, if not its from-the-cradle dominance. But this year UMBC, the original chess scholarship powerhouse, failed for the very first time to make the Final Four. Teams qualified for the honor back in December at the Cleveland Pan-American Intercollegiate Team Chess Championship. In order of average team ratings of the Final Four squads, the hopefuls were Webster University, Texas Tech University, the University of Texas-RGV, and Columbia University—the local hero and dark horse. Rules allow any college that qualifies at the PanAms to bring any squad to the Final Four. (All must qualify as legitimate college students according to US Chess rules.) That allowed Webster, who qualified by virtue of its B-Team, to bring its A-lineup, who didn’t do as well in Cleveland, to the playoffs. Webster has a deep bench. Final Four teams are made up of four players, but colleges can bring up to two alternates. Webster brought six international grandmasters to the shootout. Its top four posted a chart-topping USCF average rating of 2734, more than 80 points better than second-seeded Texas Tech University, who had won the Cleveland Pan-Ams. Another must-know rule: Final Four standings are tabulated on game-points, not match points. Theoretically, a college could win all three matches and still not take home the President’s Cup, the impressive double-handled silver trophy bearing the engraved names of the championship colleges as well as the names of the individual team members. But Webster never tested that hypothetical, winning all three of the team-on-team matches and outpointing all rivals. The Webster Gorloks amassed a lopsided 3.5-.5 (three wins and a draw) against underdog Columbia in Round 1, then went on to score 2.5-1.5 —the narrowest winning margin but decisive—over UT-RGV in Round 2 and Texas Tech in Round 3. (A Final Four tradition pairs the highest-rated and next-highest-rated team in the third and closing matchup.) The University of Texas-RGV is a new name to the playoffs. Its squad is built on the former University of Texas-Brownville program after the consolidation of UT-Brownsville and UT-Pan American, and its performance this year at the PanAms and the Final Four is a muscular comeback after four years in the cold. Its strong second-place showing promises that we’ll see them again. Coach GM Bartek Macieja was alone in deciding to bring only four team members. Not only the players come to the Final Four with their teams. Webster’s GM Susan Polgar, former women’s world champion, accompanied her squad, along with Paul Truong and Dr. Julian Schuster, Webster University Provost and Senior Vice President. Texas Tech’s program leader, GM and former US Champ Alex Onischuk, Outreach Director Olga Achourkina, and Division Associate Vice President Dr. Paul Frazier came to support the Knight Raiders. Doug Stoves, UT-RGV’s Associate Dean even brought his university’s Social Media Manager Alex Garrido, to keep all of the excited supporters back home in Texas updated and informed. The Marshall Chess Club, at 23 West 10th Street in Manhattan, is a handsome brownstone on a charming New York City street. The club’s history goes back to 1915. The present location was purchased by supporters of Frank Marshall, US champion for 27 years, in 1931 and became home to Frank and his wife Carrie, as well as a magnet to the best players from around the world. A few historical tidbits: It was the site of former world champion Jose Raul Capablanca’s last exhibition. Another world champion, Alexander Alekhine, sat there to play hundreds of speed-chess games against the best of his day. And it was the scene of 13-year-old Bobby Fischer’s mind-boggling “Game of the Century” against Donald Byrne. The non-profit club welcomes visitors. The event is sanctioned by US Chess and generously sponsored by Booz Allen Hamilton (BAH) and Two Sigma through the cooperation of the US Chess Trust. BAH’s Brian McKeon presented the trophies in the Club’s main hall, where the famous black bust of Frank Marshall was a welcome photo-bomb in every group. 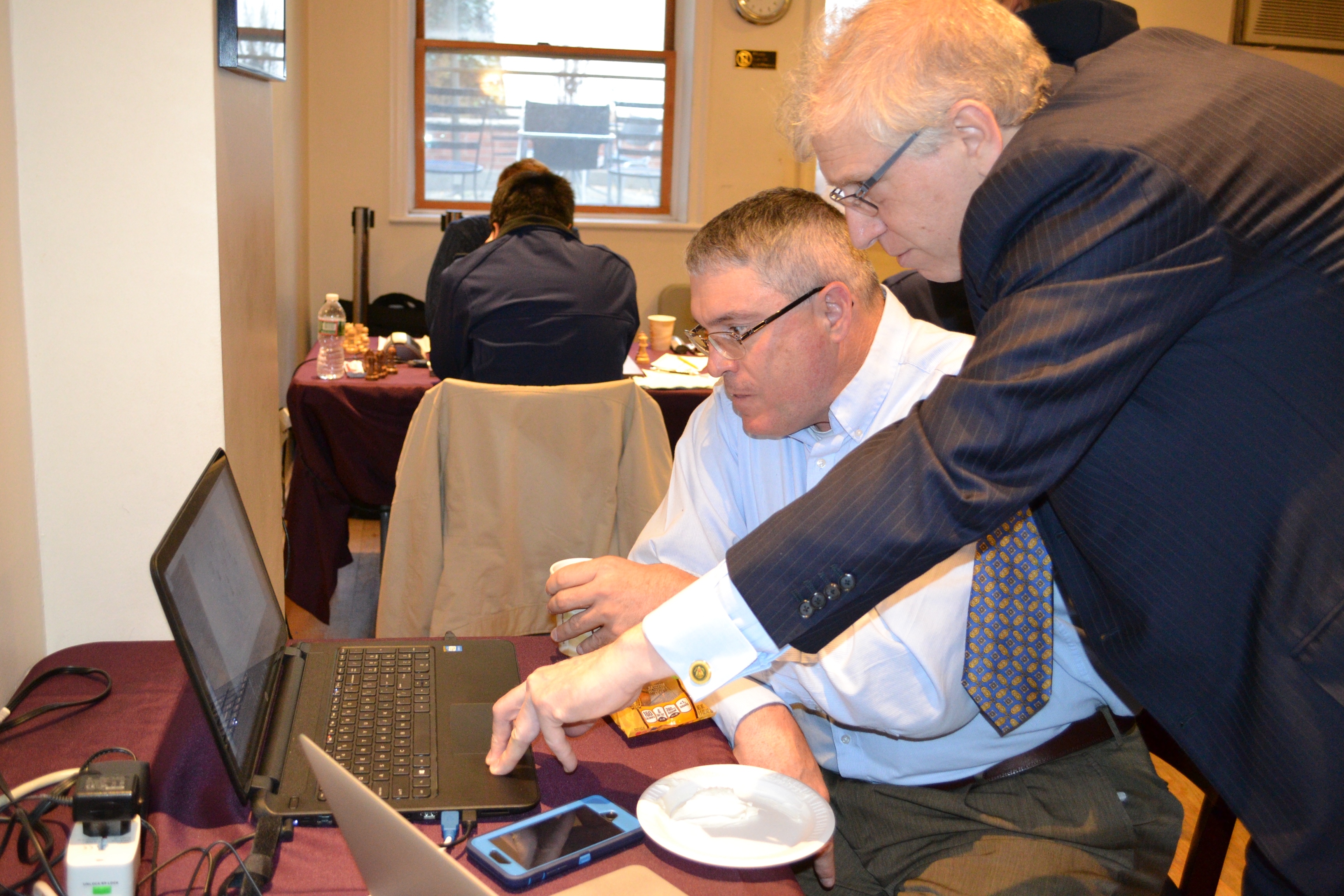 The Final Four was organized by Mark Herman, a retired senior partner from BAH and directed flawlessly by NTD and FIDE Arbiter Mike Hoffpauir, a principal at BAH. Since BAH and Two Sigma have stepped in as sponsors, the Final Four has experienced a big upgrade. Venues have become impressive. Grandmasters Max Dlugy and Irina Krush provide fascinating game-commentary and interviews, live and online at www.chesssupersite.com, where more games from the event are available. And now every school takes home a silver cup, and every participant takes home a plaque to commemorate his or her role in history. 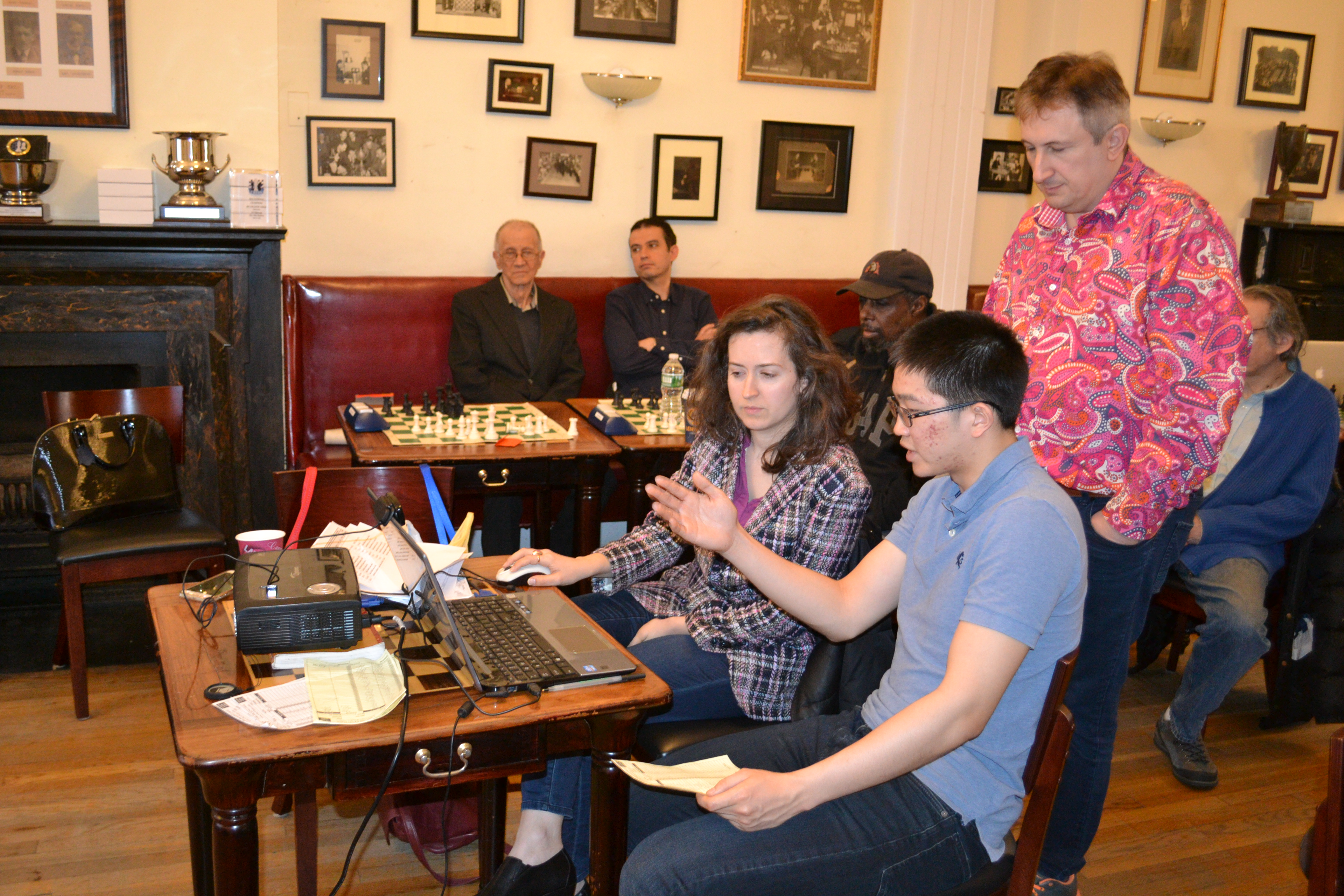