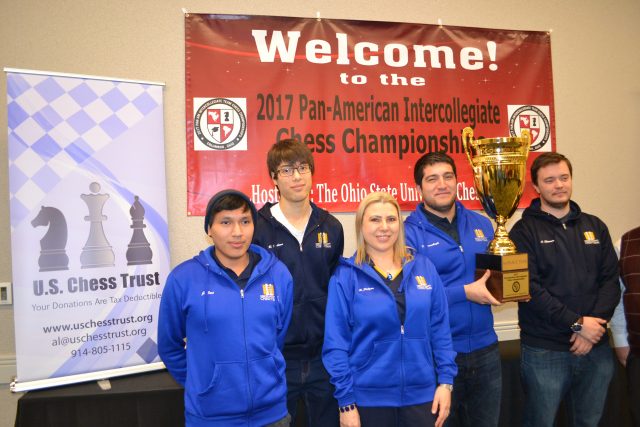 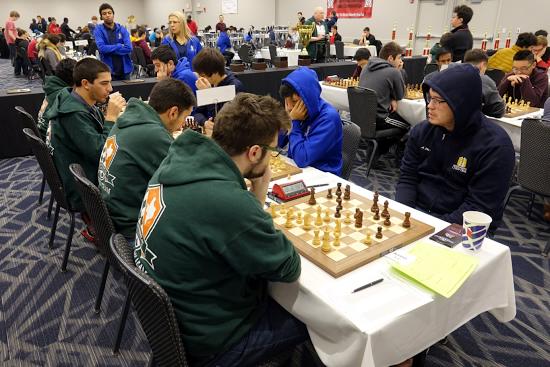 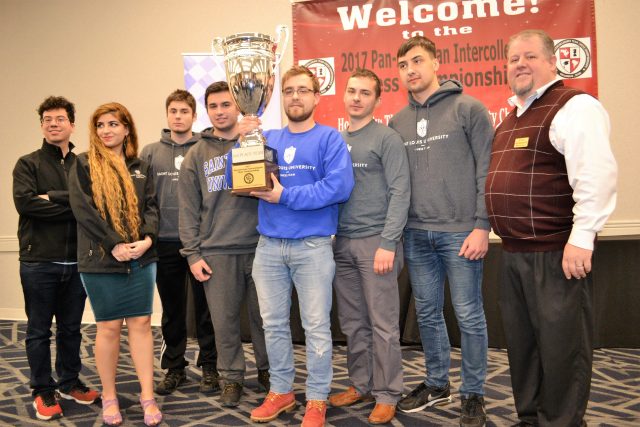 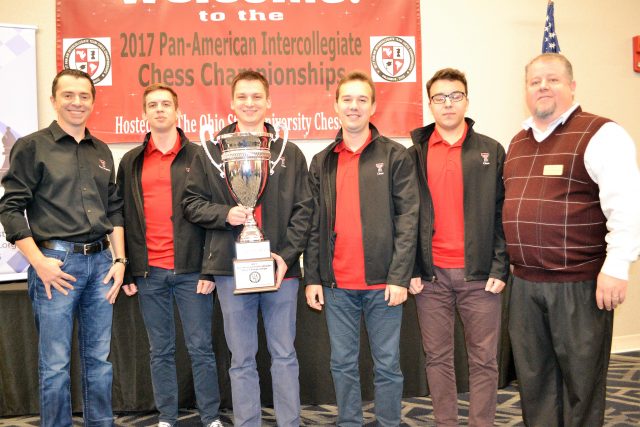 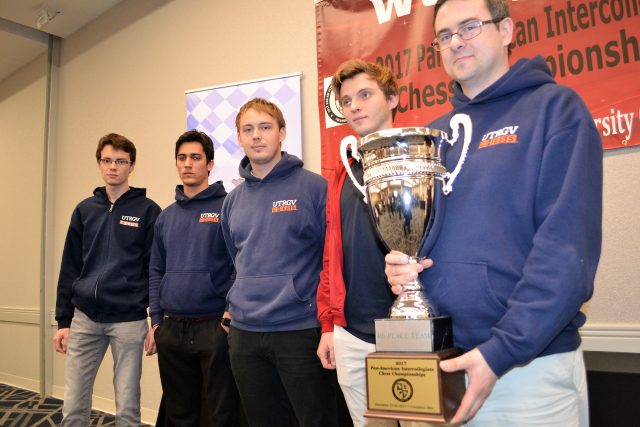 GMs Kamil Dragun, Carlos Hevia Alejano, Andrey Stukopin, Vladimir Belous and coach GM Bartek Macieja, Photo Al Lawrence Thus Webster adds to its impressive string of chess victories. Since 2013, it has won every PanAms in clear first except for 2015, when it tied with the winner on tiebreaks, Texas Tech. (But top score groups are considered co-champions under U.S.Chess rules.) Webster has won every Final Four since the first it could compete in, 2013. Before that GM Polgar guided Texas Tech to Final Four victories in 2011 and 2012. “The goal of our team, especially the A team,” Webster Universities Paul Truong said, “is never to be out of Table 1 for any round. And the goal of the B team is never to leave the area of the top four Tables. As long as we are there every round, we have a chance to win or at least make the Final Four.” Division and other team winners 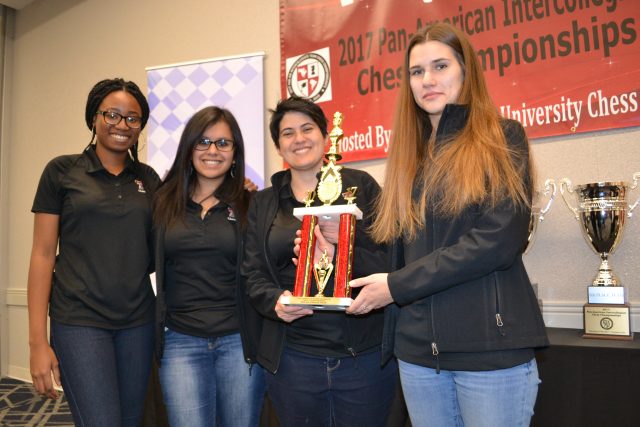 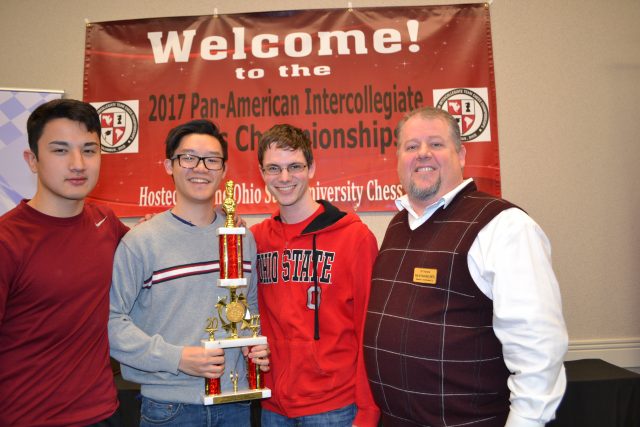 Ohio State University, Photo Al Lawrence
University of Toronto “A” (Hart House) continued a long and prestigious history of PanAms honors, winning the Top International award. Texas Tech “B” was Top All-Women Team. Washington University in St. Louis was Top Mixed Doubles team. Northwest U., from Kirkland, Washington, took Top Small College, defeating Oberlin College, who had owned that title for the previous four years. Phiona Mutesi, whose early chess career despite living in the slums of Uganda was the basis for the 2016 film “Queen of Katwe,” contributed a key win in that crucial round for Northwest, where Phiona is a scholarship student. 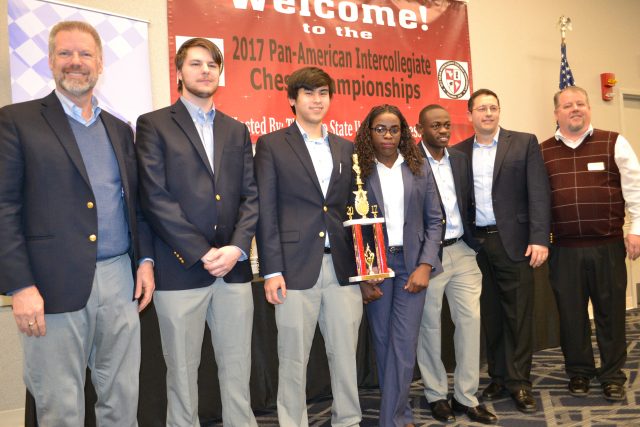 Northwest University, Photo Al Lawrence
Oberlin, who had reigned for four straight years as Small College champ, didn’t go home empty handed. Coach Constantine Ananiadis left with the Biggest Team Upset award. Top Board Winners GM Tanguy Ringoir of University of Maryland Baltimore County was top Board 1 with 5 ½ - ½. IM Safal Bora of University of Michigan “A” was Top Board 2 with 5 ½. GM Pavlo Vorontsov of Texas Tech was top Board 3 with the tournaments only 6-0 score. IM Evgen Shtembuliak, also of Texas Tech, was Top Board 4 with 5 ½. Peter Gabrielides brought the Biggest Individual Upset prize back to Oberlin by defeating a player more than 900 points higher. 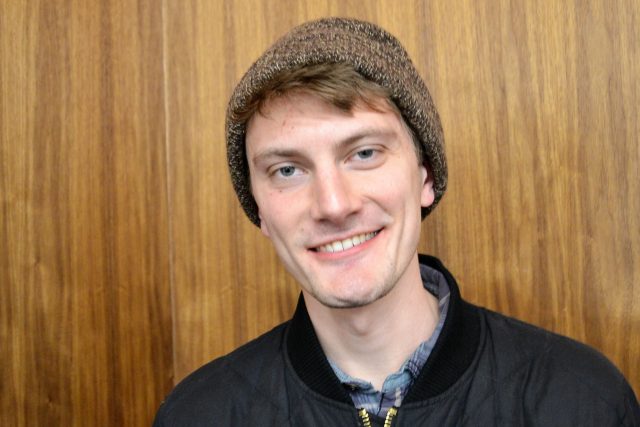 Peter Gabrielides, Photo Al Lawrence
A storied history and many to thank The Pan-Am Intercollegiate Team Chess Championship, held every year since 1946, is open to any team comprising four players and up to two alternates from the same post-secondary school in North America, Central America, South America, or the Caribbean. Before 1964, the event alternated between an individual and a team college championship. But the popularity of playing for your team easily won out. Reuben Fine and Gata Kamsky are only a few legendary players who have fought for their teams at the PanAms. 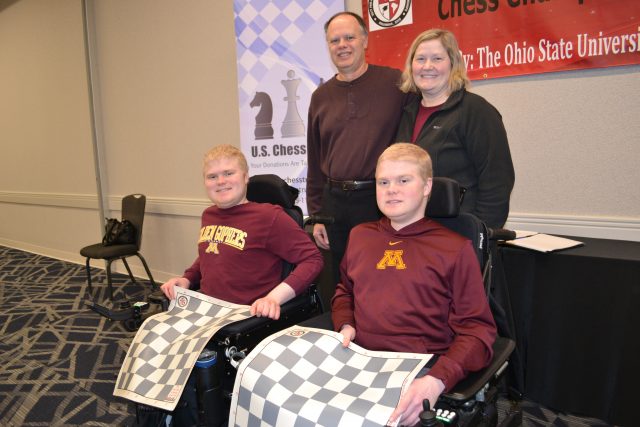 Identical twins, Jacob and Nathan Ritter (l-r) played for the University of Minnesota Twin Cities, Photo Al Lawrence
The Pan-American Intercollegiate Team Championship is a national championship sanctioned by U.S. Chess. This year’s championship was hosted and sponsored by Ohio State University with additional sponsorship from the U.S. Chess Trust and Akuna Capital of Chicago. The 2018 PanAms will be held in San Francisco. Chief Director and former U.S. Chess Executive Director and CFO Grant Perks ran an on-time event with the help of Bloomfield, who was Chief Assistant TD as well as Organizer, Kathy Lin, Ben Tancinco, Al Valentine, and Aryan Balyan. 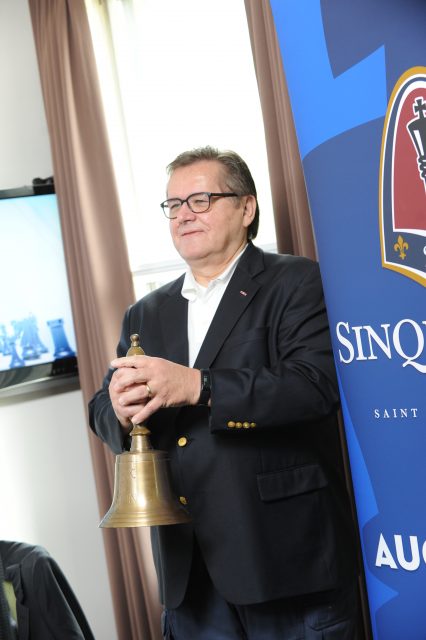 Al Lawrence is a frequent contributor to US Chess News. He recently wrote about the U.S. Armed Forces Championships.  He is a two-time winner of the Chess Journalist of the Year award (2000 and 2016) and a former Executive Director of the US Chess Federation. He currently serves as the Managing Director of the U.S. Chess Trust.
SHARE: