Editor’s note: With this post we begin the process of bringing all of IM John Watson’s Chess Life book reviews to CLO. We will work backwards until we reach his June 2020 review, and we will publish his new reviews going forward with his March review next month. This kind of long-form critical writing is rare in today’s chess world, and we’re proud to help bring it to an expanded audience by publishing it on CLO. 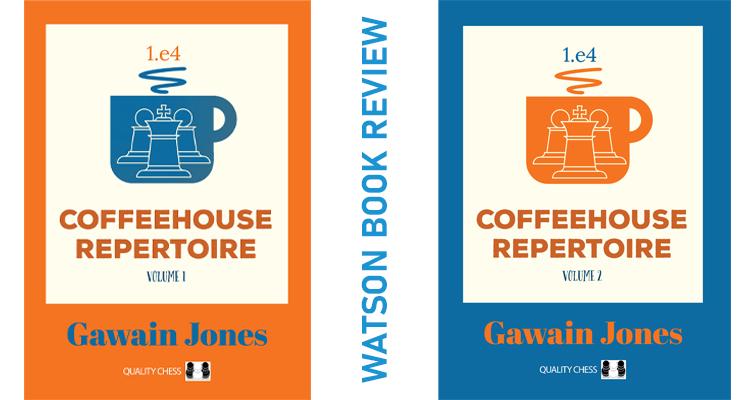 Originally published in the February 2022 issue of Chess Life.

Of late we are seeing numerous opening repertoire books and electronic products by strong players. Most of these recommend variations within a particular White or Black opening, for example, a Caro-Kann Defense repertoire or a tome on “Beating the Sicilian.” That’s difficult enough, but a few brave authors have taken on the more ambitious task of presenting a complete repertoire for White from the very first move, or a repertoire for Black versus all of White’s first moves.

You can imagine that with the increasing depth of established theory, such an undertaking has become an extremely daunting one. In his recent Coffeehouse Repertoire books, grandmaster Gawain Jones presents a deep repertoire with 1. e4, and it takes two volumes and 1000 pages to complete the chore.

These are pages of the dense analytical detail that Quality Chess books are known for, with limited verbal explanation. That might seem excessive, but in fact, Jones can be commended for his efficiency. Quality Chess has already published two even lengthier multi-volume works devoted to repertoires with 1. e4. GM Parimarjan Negi’s brilliant and original five-volume series clocks in at 2280 pages (so far: he hasn’t even written about 1. e4 e5 yet!). And GM John Shaw’s three-volume Playing 1.e4 series consumes 1472 pages. Finally, I should mention that GM Justin Tan’s recent book 1.e4! The Chess Bible (out from Thinkers Publishing in 2021) takes up the same challenge; so far, his first volume takes up 462 pages, to be followed by two more of presumably similar length. Such books are not for the faint of heart.

Jones never skimps on detail, so even 1000 pages would never have sufficed had the material not been further constrained. He achieves this by avoiding the traditional main lines in almost every opening. But the word ‘coffeehouse’ in the title is misleading; it has connotations of risky, marginally unsound lines full of traps and tactics. As far as I can see, thankfully, there are no such lines at all in these books. Here’s how Jones explains his process for selecting variations in his preface:

Primarily I wanted the choices to be sound: I've wasted too much time trying to fix holes in dodgy lines to inflict them upon you. Of course these recommendations will work best if they surprise your opponent, but I believe they all have inherent merit too.

Secondly, I wanted the repertoire choices to pack a genuine punch. Surprising your opponent with an insipid line may work occasionally, but will hardly scare a well-prepared opponent. With this repertoire, even if your opponents know what's coming, they won’t have an easy time.

Thirdly, I aimed for relatively offbeat choices where possible, provided they met the above two criteria. A lot of your opponents are unlikely to have faced these lines many times (if at all) before.

Let me jump into a few examples of these choices. Versus the all-important 1. e4 e5 2. Nf3 Nc6, Jones features the Scotch Gambit line 3. Bc4 Nf6 4. d4 exd4 5. e5, or, after 3. Bc4 Bc5, 4. c3 Nf6 5. d4. He has extensive personal playing experience with these lines versus elite grandmasters. Jones knows and cites the relevant literature, and as in the rest of the book, consistently quotes the best and most recent correspondence games. I was impressed by the fact that the lengthiest lines end in positions with sufficient play for both sides, to the extent that they seem quite as practical as entering into one of the typical Ruy Lopez main lines.

The point is that, when necessary, Jones insists upon finding the very best ways for both sides to proceed, and tries to avoid dead ends without any prospects. This is a high-integrity approach.

I used to play the Alekhine Defense (1. e4 Nf6), and have tried to keep up with the literature, most recently GM Christian Bauer’s The Modernized Alekhine Defense (Thinkers Publishing, 2021). Bauer demonstrates convincingly that many of the main lines that have been supposed to favor White are at least playable for Black. Interestingly, both Jones and Tan offer the Four Pawns Attack, 2. e5 Nd5 3. c4 Nb6 4. d4 d6 5. f4, as the suggested solution, even though it hasn’t traditionally been the most popular system or a favorite of many leading grandmasters. But I think it hits the spot.

Bauer has two main recommendations versus the Four Pawns involving an early ... g7-g6, and two more conventional solutions in a ‘Bonus’ chapter; unfortunately, Jones’ analysis of all these lines is very convinc-ing (as is Tan’s, by the way), and I don’t find any of them really acceptable from Black’s point of view. To my mind, the Four Pawns has become an existential threat to 1. ... Nf6; hopefully, an enterprising analyst can improve upon Black’s chances.

I recently played a casual game in this line and was successful against a strong opponent. Since d2-d4 usually follows, 4. Ne5 contains some themes similar to the 2. d4 line, but my game went in a unique and interesting direction, which is a sign in its favor.

At first you might think this is truly a coffeehouse line, i.e., of a speculative nature, but practice, theory, and time spent communing with the engines all show that White gets either compensation for his pawn or an interesting game if Black returns it. True, I believe that Black can get full equality with accurate play, but the resulting positions are complex and full of opportunities for both sides, which fits in well with the goals of Jones’ repertoire. (See our report on the U.S. Women’s Championship in our January 2022 issue for two games by IM Carissa Yip in this variation. ~ed.)

The following struggle between top-flight grandmasters illustrates how wild the play can become.

As you might expect from a variation stemming from Carlsen, this has been played a fair amount on the top grandmaster level and is analyzed in various sources. I think there are a few lines in which Black gets sufficient chances, but no more than equality, while Jones demonstrates that even in those cases a game with rich content lies ahead. Although this repertoire against the Sicilian has no ‘main lines,’ it is nevertheless theoretically demanding, as indicated by the 265 pages Jones devotes to it.

These two volumes have numerous strengths. The author is an experienced and active grandmaster, currently rated in the high 2600s, and having previously broken the 2700 threshold. Among many other titles and tournament wins he counts two British championships.

Jones has played the majority of lines himself, often again the world’s leading players. He is assiduously careful to analyze Black’s best defenses in every line, admitting objective equality in those cases where it arises, but finding many new moves which ensure that the play will not peter out and the game will remain challenging even in the worst case. This contrasts with many works which constantly claim ‘small advantages’ or ‘better prospects’ for the preferred sides in cases where, with a little investigation, one finds complete equality.

One cautionary note: I should make clear that the two volumes of 1. e4 Coffeehouse Repertoire are ideally suited for experienced players or truly dedicated students. Many lower players will find the theoretical demands burdensome, and there’s very little verbal handholding of the “Why am I playing this move?” variety.

But it’s worth pointing out that even developing players could use this book to fill out parts of their repertoires, for example, to gain a practical weapon against 1. ... c5 or 1. ... e5. Furthermore, it can serve as a valuable reference. You can play and practice your openings without having every detail memorized, after all, and use this book as a resource to gradually build your knowledge and understanding. In any case, Gawain Jones has made an important addition to chess theory, and I hope that we see more of him as an author.