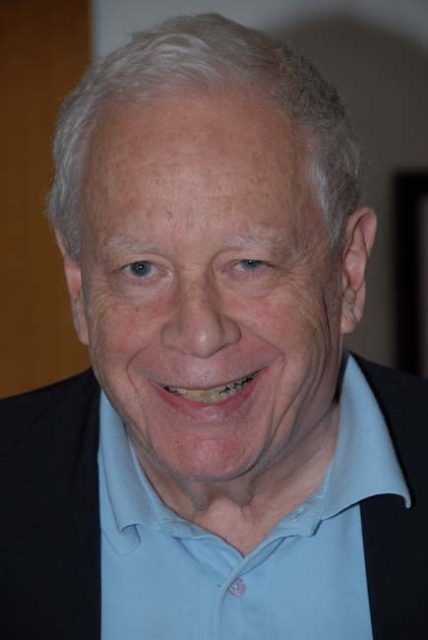 American chess has suffered a great loss with the death of International Master Walter Shipman at the age of 87. Shipman, who died on February 28th in San Francisco, had been ill for some time. Walter Shipman was born in New York on April 18, 1929, and first received national attention when he finished near the top of the field in the 1946 U.S. Open. This was the debut not only for him, but a golden generation of players including Robert and Donald Byrne, Larry Evans and Arthur Bisguier, who would soon transform American chess. Unlike most of them Shipman never played professionally, despite being one of the top dozen players in the United States for most of the 1950s. He received his undergraduate degree from Columbia University and worked as a lawyer his entire professional life.

Shipman was quite active as a player throughout the late 1940s and 1950s and competed in two strong events during that time, performing creditably in both. He scored 4-6 in the 1955-56 Rosenwald, a six-player double round robin that was a defacto U.S. Championship.
His win, on the Black side of the Budapest Defense against Sammy Reshevsky, was one of the key games of the tournament.
Shipman was 4-5 in the 1959 Log Cabin Invitational (Lombardy, Benko, Evans, Bisguier, R. Byrne, etc.) that had many of the same players who competed in the U.S. Championship later that year.

The Manhattan Chess Club was Shipman’s home base from the beginning of his career until he moved with his wife Mary to San Francisco in the mid-1990s. He first made a name for himself in the weekly blitz tournaments, and not long after became a fixture in its lineup in the Metropolitan team league, an important competition before the rise of weekend tournaments. Shipman also competed regularly in the championship of America’s strongest club winning it six times (1972, =1974, 1984, 1985, = 1994, 1995). Walter Shipman will be remembered as more than a player. His intelligence, wit, friendliness and sense of fair play will not be forgotten. Nor will his contributions away from the board. During the 1950s, before family life (his son Joe and daughter Judy are both accomplished tournament players) and career stepped in, Shipman was active as an administrator for the U.S. Chess Federation and the Manhattan Chess Club. It was in the latter capacity that he persuaded his fellow directors to make an exception and waive the age requirement to allow 12-year-old Bobby Fischer to join the M.C.C. in August 1955. Almost exactly two years later Fischer and Shipman would draw in the last round of the 1957 U.S. Open in Cleveland, the scene of Bobby’s first great triumph. Shipman would finish equal fourth, one of many high placings over the years in U.S. Opens – equal third in 1950 and tied for second forty-five years later! 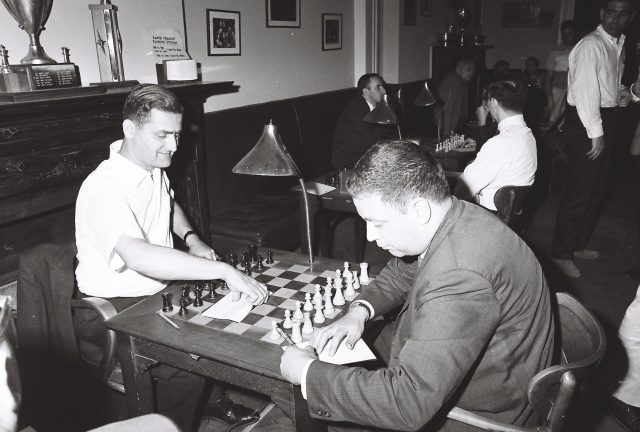 Walter Shipman and Louis Levy about to start play. James Sherwin and Paul Brandts are in the background with the black pieces. Circa 1966.

The two would meet again in an invitational blitz tournament held in August 1971 at the Manhattan Chess Club to honor the club’s new quarters and Fischer’s 6-0 victories over Mark Taimanov and Bent Larsen. Bobby ran away with the event, scoring 21 ½ out of 22, drawing only Walter Shipman. The latter was winning that game but simply ran out of time against the super speedy Fischer. It was Shipman who perhaps best expressed what it was like to play Fischer as he got stronger and stronger; "It began to feel as though you were playing against chess itself." One American record that Shipman set that will be hard to beat, is that of the oldest player to become an International Master. Despite being of that strength for three prior decades, he did not formally receive the title until 1982 – there were simply no prior opportunities for earning the title for American players who weren’t willing to travel abroad. Few could match Shipman’s knowledge of American chess history, particularly that of the Manhattan Chess Club. Thanks to him a complete list of winners of the club’s annual championship dating back to 1883 is available, as is a record of the Manhattan’s many locations in its over one hundred year existence. Shipman was unfailingly generous in sharing information. Noted American chess historian John Hilbert, author of Shady Side: The Life and Crimes of Norman Tweed Whitaker Chess Master, wrote that when he approached Walter about his remembrances of Whitaker, Shipman not only provided it, but also asked many questions about the work in progress, helping to stimulate further research. Fair and objective were two words that accurately described Walter. When asking about a player from the past that Shipman personally knew, one could be sure they were getting the truth, the whole truth and nothing but the truth. A case in point is the late Abe Kupchik, who was inducted into the U.S. Chess Hall of Fame in 2014. The chapter on Kupchik in Arnold Denker and Larry Parr’s The Bobby Fischer I Knew is titled The Frightened, Little Rabbit and the conclusion of the former is that “Kupie” had a passive style and played as if he was afraid. Certainly Denker, who was known for his love of attacking play would not have found the games of Kupchik, generally remembered as a grinder par excellence, to be particularly interesting, but was he fair in his assessment? Shipman (who knew both men well) did not think so, believing “solid” a much accurate description of Kupchik’s playing style. He added that “Kupie”, in his opinion the second best American player after Marshall from roughly 1915 to the late 1920s, beat Denker in a very nice game in the 1936 US Championship and had a lifetime plus score against him. 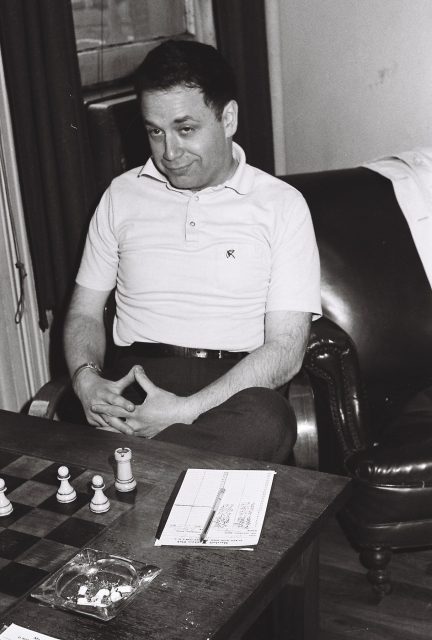 This was not the only piece of unwritten American chess history that Shipman had tucked away. Everyone remembers the U.S. team did not attend Buenos Aires 1939 after winning the previous four Olympiads, but why not? The answer is not to be found in the pages of Chess Review or the American Chess Bulletin. Walter explained that George Emlen Roosevelt (yes, one of those Roosevelts), was willing to pay the travel for the U.S. team, but balked when the players asked for a modest honoraria to cover a month’s lost wages attending the event. Roosevelt, a banker and philanthropist who was one of the most prominent railroad financiers of his day, felt the players should be honored to play for the flag. The players, who had already demonstrated their patriotism countless times that decade, but had families to feed during the Depression, felt otherwise. Sadly, with Walter’s passing, much insider knowledge has been lost. Shipman was a player who went his own way in the opening. Long before its recent revival, he championed the Cozio Defense (1.e4 e5 2.Nf3 Nc6 3.Bb5 Nge7) to the Ruy Lopez and for many years opened 1.d4 Nf6 2.g3 as White. Like Kupchik, he was a fine positional player who picked up more than his share of points in the endgame, but also like “Kupie” he could attack quite vigorously when the situation called for it. A case in point is the following miniature played against fellow IM Kongliang “Ben” Deng at the 2004 American Open in Los Angeles. Walter was 75 when this game was played.