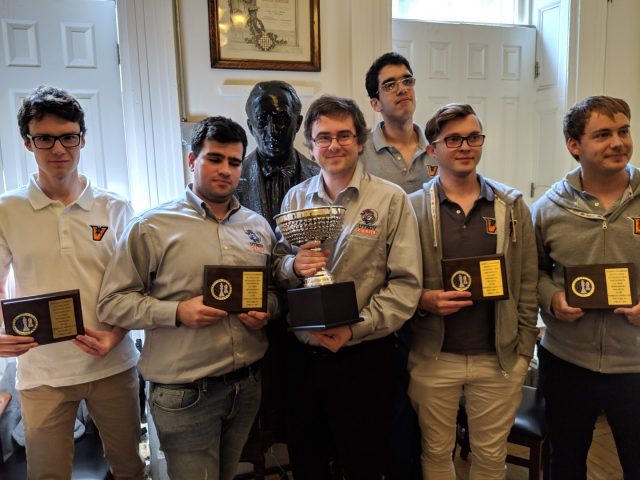 UTRGV, 2019 Final Four Champs
While New Yorkers packed the streets and parks to enjoy the beautiful spring weekend of April 6th and 7th, four of the nation’s best college teams were hunkered down over their boards inside of the historic Marshall Chess Club looking to bring home the 2019 President’s Cup. The Final Four of College Chess (as the event has come to be known) saw last year’s champions, the University of Texas Rio Grande Valley, mount a successful title defense. This two-year mini-streak comes at the expense primarily of Webster University, which had been on a record five-year run from 2013-2017 and was the top-seeded team at both the 2018 and 2019 events. The Teams 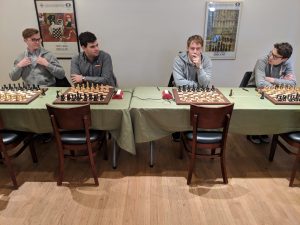 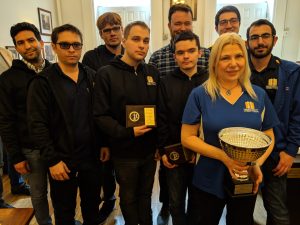 University of Texas at Dallas (UTD) 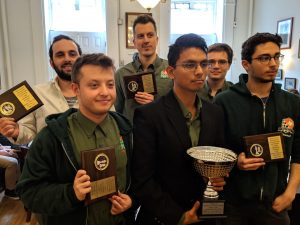 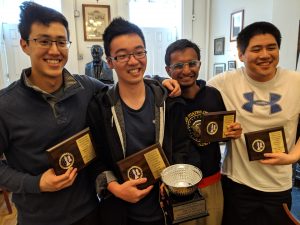 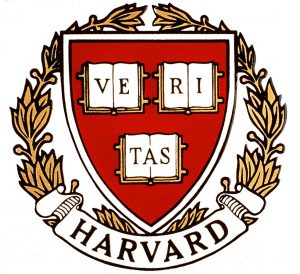 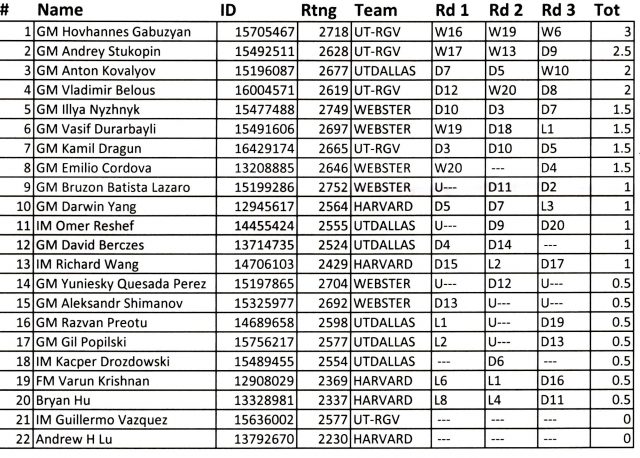 Wall Chart, 2019 Final Four
While RGV were the defending champions, they still came to the Marshall as “only” second seeds behind powerhouse Webster University.  Webster was hungry to reclaim their place at the top of college chess, but by the end of day one, RGV enjoyed a 6.5-5.0 lead, with UTD (3.0) and Harvard (1.5) having no chance at the top spot. Even though this meant that for Webster to overtake RGV they would need to score at least three victories on four boards in their final-round, head-to-head match, RGV was not taking anything for granted. In fact, they showed up at the Marshall a full hour before the 9:00 a.m. round start. (I remind you that these are college students. And chess players. This was a hardship!) 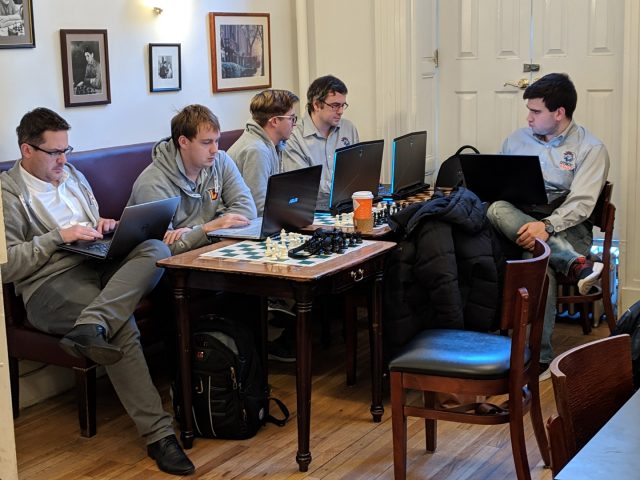 RGV, preparing for the critical 3rd round.
Webster arrived full of energy and enthusiasm on the morning of the final round: CLO interviewed Coach Macieja just after the final round started to get a sense of how his team approached this key round: Webster coach Polgar was keeping any specific plans her team had close to her vest. GM Maxim Dlugy helped set the stage for the final-day events; CLO also asked him about his days as President of US Chess as we reminisce in this 80th anniversary year for our organization: This was a new experience for the Webster squad: Never before had they been trailing going into the final round. Ultimately, they endured another first: their first-ever match loss in the Final Four as RGV managed to defeat them 2.5-1.5 in the last round, with three draws and a victory on board three by GM Hovhannes Gabuzyan over GM Vasif Durarbayli. To be fair, this was not a “normal” situation for Webster as they had to go all out with risky play to have any chance of overcoming the deficit. The final team scores were: RGV 9.0, Webster 6.5, UTD 5.5, Harvard 3.0. GM Susan Polgar, head coach for Webster, immediately offered her congratulations to RGV, with FM Paul Truong, coach and chief strategist for Webster, offering to RGV, “You guys are tough!” 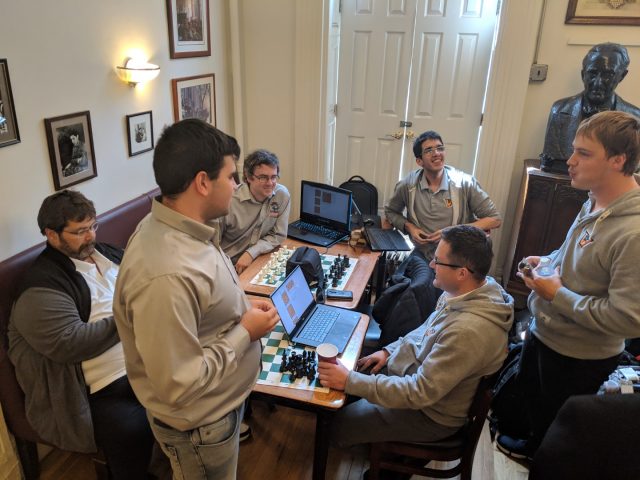 RGV, enjoying their victory!
GM Gabuzyan, playing board three in all three rounds, was the only player to win all three of his games. He was the Armenian national champion in 2017 and is currently a sophomore in the Management program. 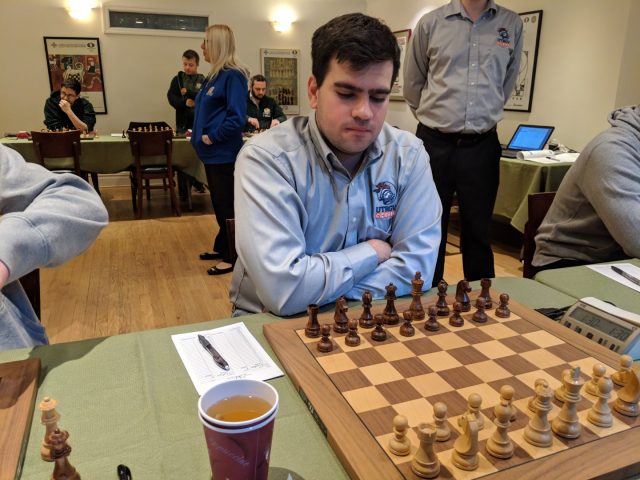 Hovhannes Gabuzyan
Hovhannes selected his round one win against GM Razvan Preoutu of UTD as his most interesting game, which he has annotated for CLO:   All games can be downloaded from uschessfinalfour.org. More annotated games will appear in our Chess Life report in the July issue, but to whet your appetite, here are some tactical gems from the weekend provided to us by IM Vignesh Panchanatham, who is currently studying at Princeton University where he is a freelance reporter with Princeton's University Press Club. He tied for first in the top section with five others at SuperNationals VI in 2017, which he wrote about in the August 2017 Chess Life. THE SKITTLES ROOM Sights and sounds from the Final Four to give you the full flavor of the event. GMs Vladimir Belous (RGV) and Emilio Cordova (Webster)  discussing their last-round draw: Grandmaster Vasif Durarbayli of Webster on the Marshall’s back terrace alone with his thoughts during his round-one game against Harvard’s FM Varun Krishnan: 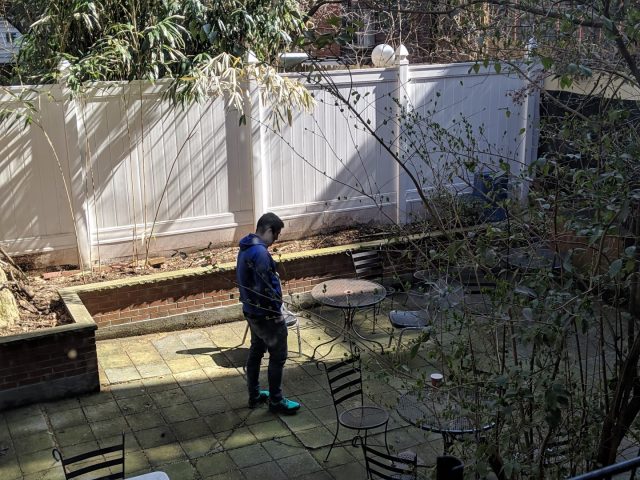 GM Durarbayli alone with thoughts
The snack of choice for the players was New York’s iconic black and white cookie, provided by organizer Mark Herman.  Does anyone doubt that this is the best choice for chess players (symbolically at least, if not nutritionally)? In a famous episode of the TV show “Seinfeld,” Jerry says, “… the black and white cookie. I love the black and white. Two races of flavor living side by side. It's a wonderful thing isn't it?” Perhaps this speaks to the collegial nature of the Final Four as well. 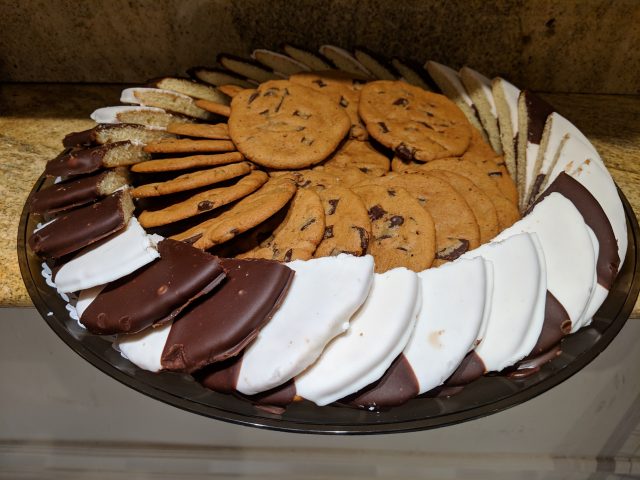 The iconic black and white cookie (with inferior cookies)
Board two was the “Magnus Carlsen” board, signed by the World Champion for Mark Herman. Certainly there is nothing intimidating for the players about this, right? Or maybe it is motivating? 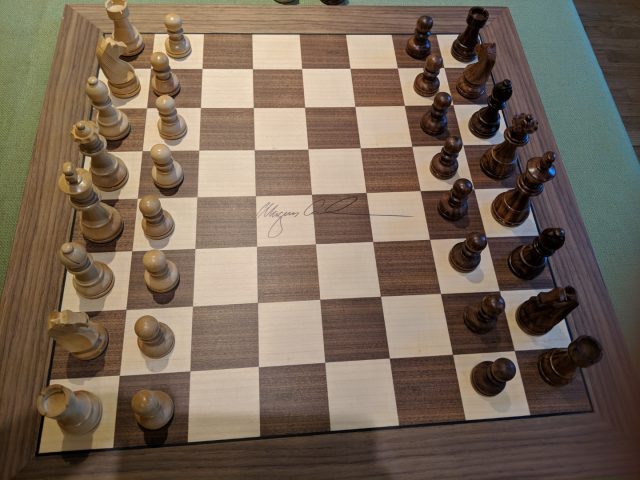 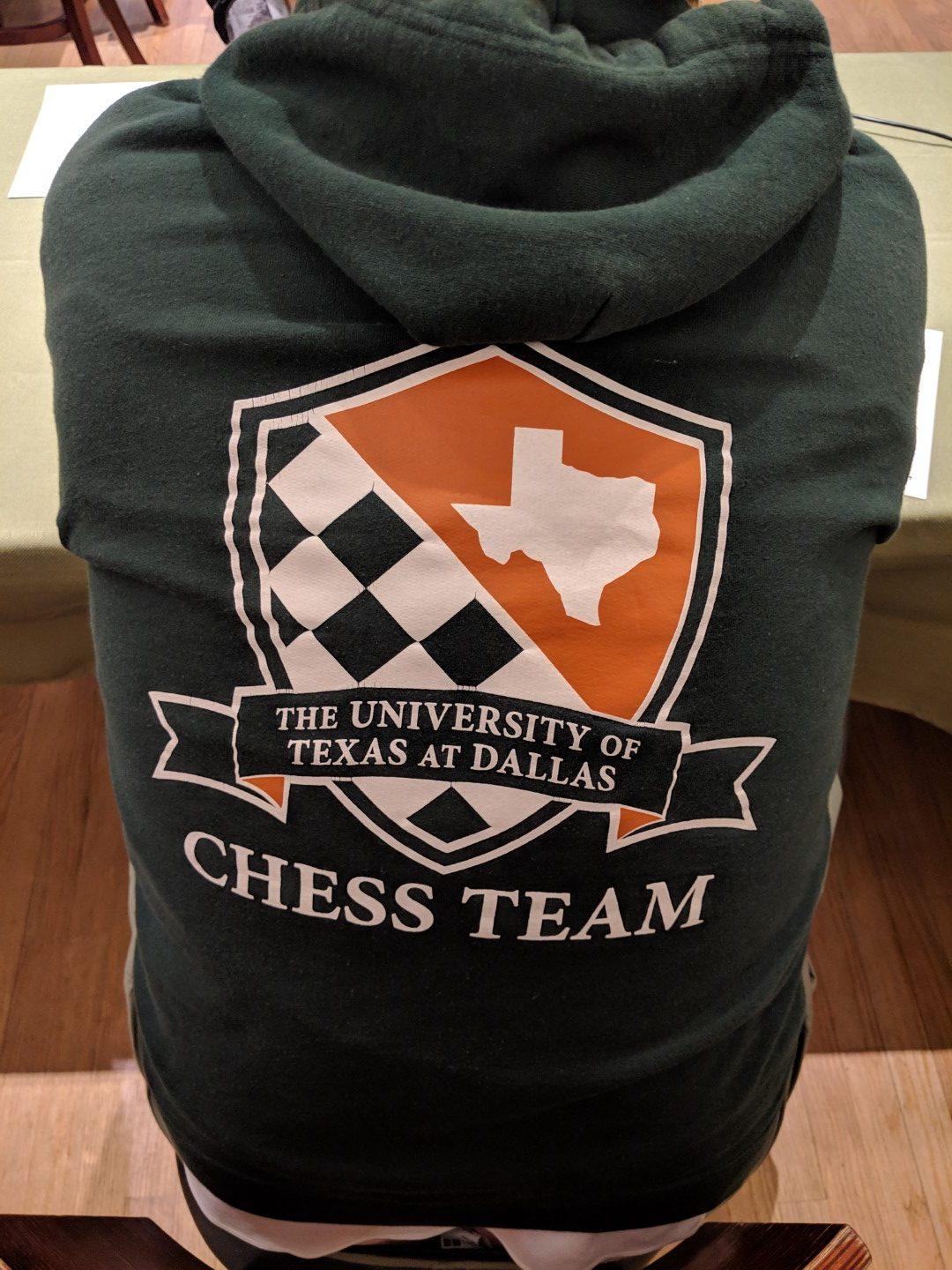 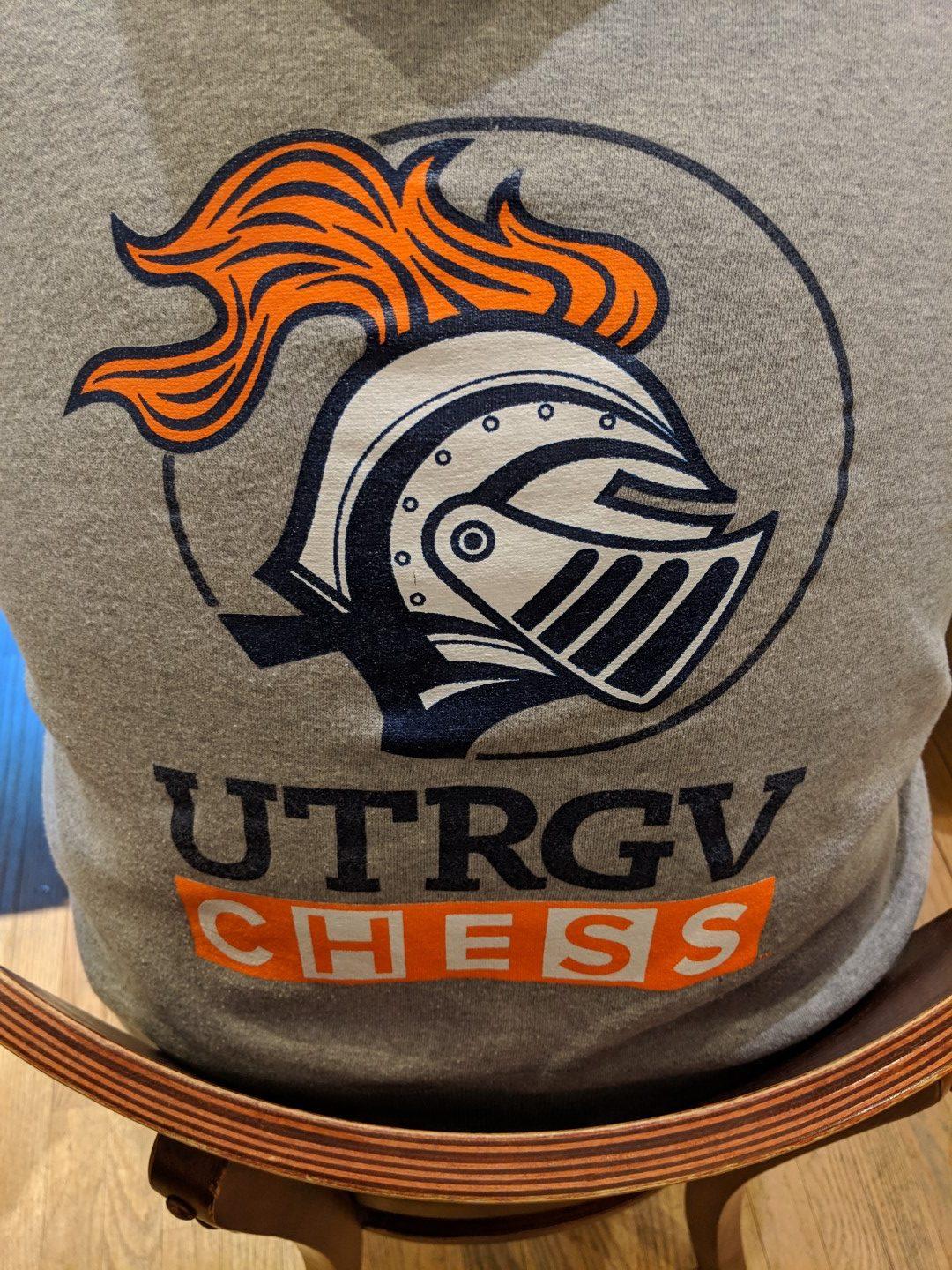 Before the “Drawing of Colors” ceremony on the evening of April 5, Webster players blew off some steam with Bughouse: 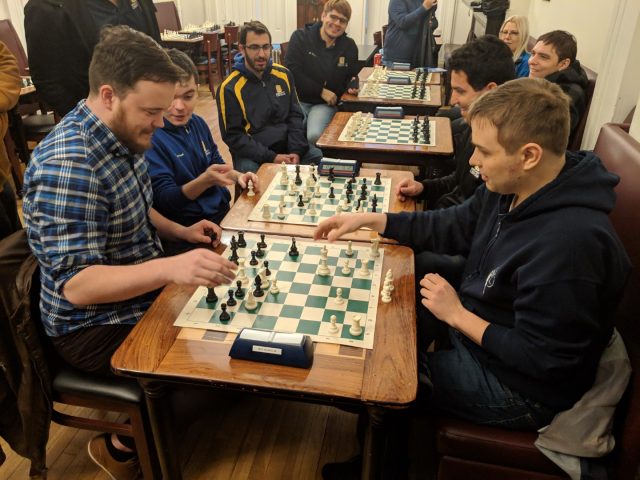 Webster plays bughouse!
Tonight (April 8), Texas Tech, which has made it to the Final Four eight of the last nine years but just missed out this year, plays in the finals of that “other” Final Four for the first time, the NCAA’s basketball tournament. Apparently, the sporting gods will allow any one school only so much success at one time as Texas Tech was the victim of the tiebreak system at the Pan-Ams, preventing them from qualifying this year. 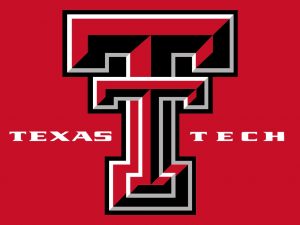 Texas Tech!
The Many vs. the Few: In the last round, UTD played Harvard. UTD is the granddaddy of this event, having won the first event in 2001 and then going on to compete in a total of 16 of the event's 19 years. Harvard’s only previous appearance was in 2002 when they also finished in fourth place. UTD is on the left in this photo: 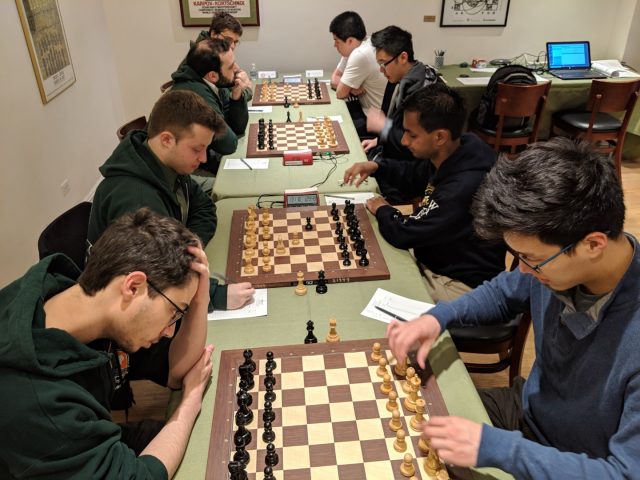 UTD (left) vs. Harvard
This is the ninth year that Mark Herman has organized the Final Four, and it is the sixth year that New York City played host (the first two NYC events were at the New York Athletic Club.) CLO talked to Herman about his history with the event: International Arbiter Oscar Garcia (left, with Mark Herman) directed. Frank Marshall (in bust form) appears to approve: 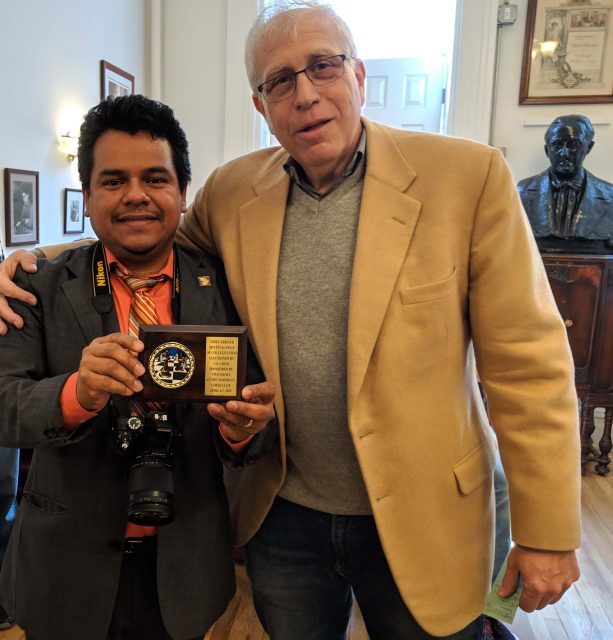 IA Oscar Garcia and Mark Herman
Two Sigma once again sponsored this event, with the funds passing through the U.S. Chess Trust. 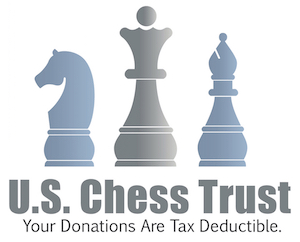 The live streaming commentary archive is expected to be uploaded to YouTube soon. 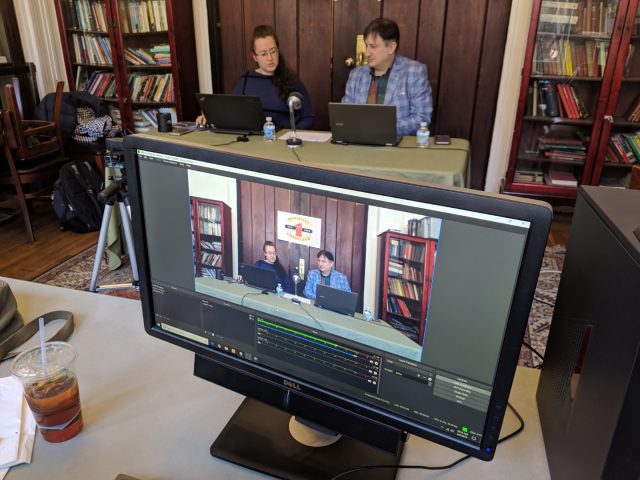 GMs Dlugy and Krush livestreaming
Thus closes another exciting year in the ever-growing, increasingly competitive college chess community. The next academic year brings yet another school adding a chess program as the University of Missouri joins the fray.  Given “Mizzou’s” partnership with the Saint Louis Chess Club, coach GM Cristian Chirila’s team can be expected to be an instant challenger for the top spot, as was Saint Louis University when its program began in 2015—they made the Final Four by 2017. We’ll get a hint of what to expect when the next college season starts with the 2019 Pan-American Intercollegiate Team Chess Championship (the “Pan-Ams”) at the end of December in Charlotte, North Carolina. With Webster, Saint Louis University, and now the University of Missouri, another key question for the college chess community is: Has the college chess strongpoint shifted from Texas to Missouri? Author note: Dan Lucas is the US Chess Senior Director of Strategic Communication. Photos and videos may be reused with this attribution: Photo <or video> by Dan Lucas, courtesy of US Chess. Look for Al Lawrence’s comprehensive Final Four report in the July issue of Chess Life.
SHARE: