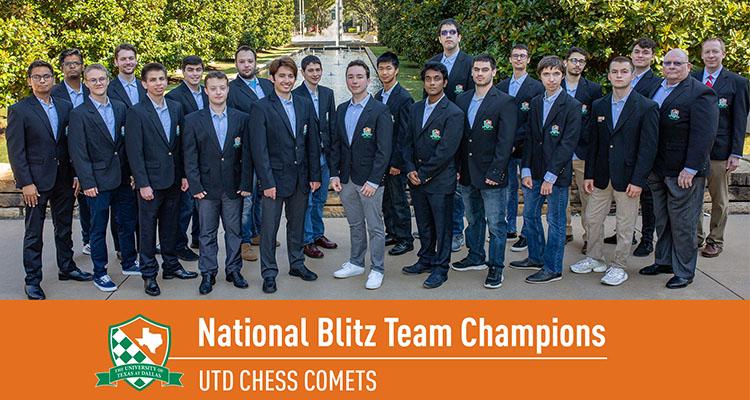 Image Caption
The University of Texas at Dallas was the gold-medal team in the 2021 Online Collegiate Blitz Championships, and also took team bronze in the Collegiate Rapid Championship.

The 2021 U.S. Online Collegiate Rapid and Blitz Championships were organized by the Texas Tech University chess program and held on the lichess.org platform over the weekend of September 25-26. Over 20 American schools participated, each allowed an unlimited amount of participants in order to seek this year's collegiate champion for both time controls. The 2021 Collegiate Blitz Champion is GM Grigoriy Oparin from Mizzou, and the 2021 Collegiate Rapid Champion is GM Jose Alcantara from Webster University.

The top four individual scorers from each school combined for the team score. Despite just two GMs on its roster, the University of Texas at Dallas was fueled by a feisty group of IMs to win the gold medal for collegiate blitz, beating out the likes of Saint Louis University (6 GMs) and Webster University (8 GMs). UTD also took team bronze in the Rapid championship, with Webster winning gold.

Complete final standings from both events may be found here. The following is a Q&A and annotations from UTD head coach GM Julio Sadorra.

How many UTD Chess team members played in the tournament?

All of our team members (14), reserve team members (5), and a few chess club members participated in this event. Every university was allowed to send as many players as possible, but only the top four individual scores from each school counted towards the final team standings. 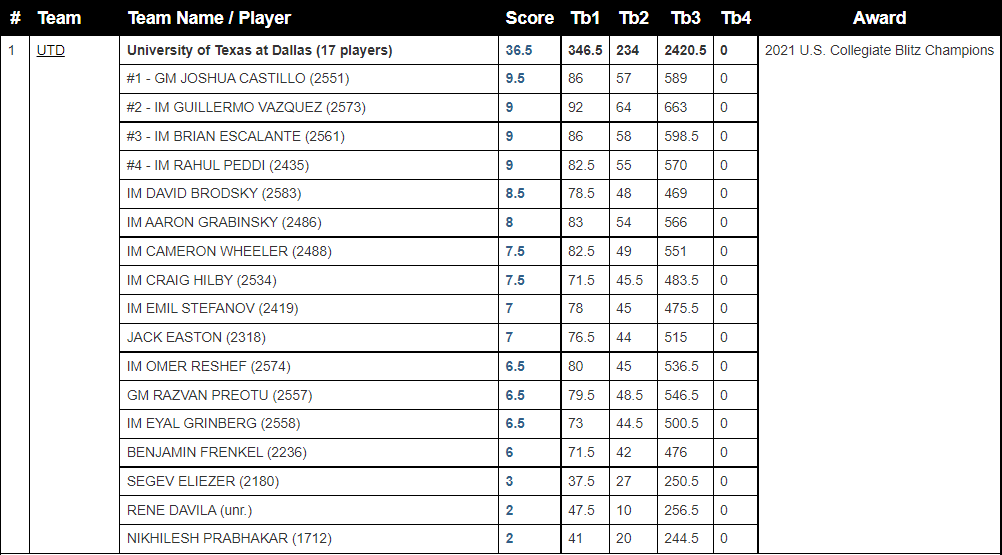 How did the UTD team prepare for this tournament?

We did our regular weekly training in our COVID-safe team room, and played practice matches online to adapt to the tournament format and venue.

What does this win mean for the team?

This team victory is special to UT-Dallas because it’s the first time that we got top places in this national collegiate event: bronze in Rapid and gold in Blitz. It’s also encouraging because the guys have been preparing hard and building their chess knowledge since last year.

Image Caption
The Top-10 of the final individual standings of the 2021 Online Collegiate Blitz Championship.
SHARE: