US Chess sent a delegation to the 2019 London Chess Conference, held November 30-December 1, to offer our contributions to the programmatic theme of “Chess and Female Empowerment.” The conference featured a variety of presentations, workshops, and round-table discussions that focused on bringing more women and girls into chess as well as the challenges related to sustaining their interest. Other presentations focused on a variety of other topics involving women in chess as well as more general topics related to chess governance and education. After the conference itself, education workshops continued into the next week alongside the London Chess Classic and the final of this year’s Grand Chess Tour. 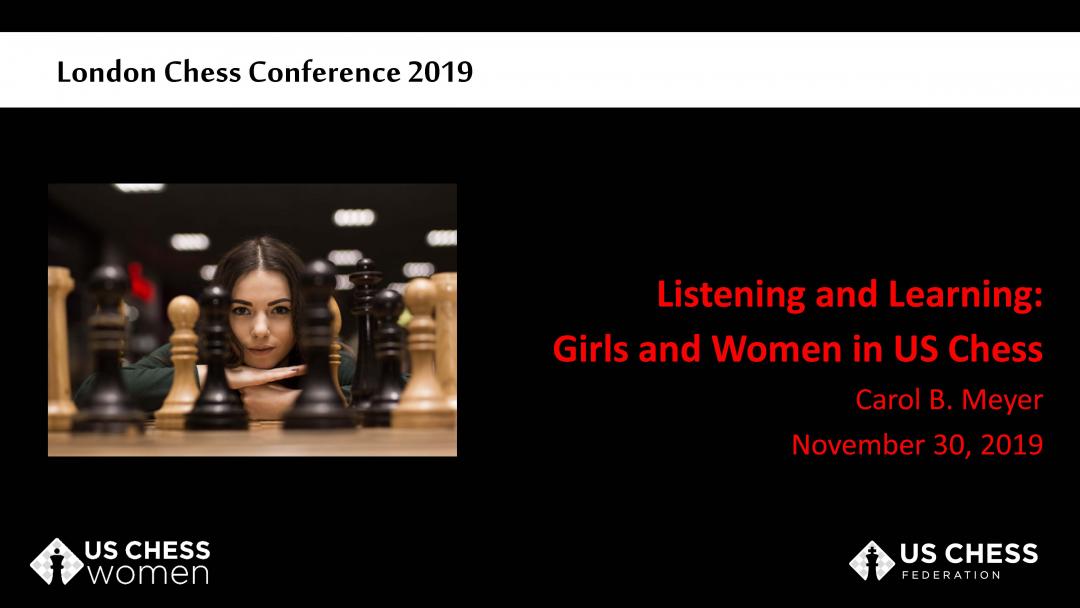 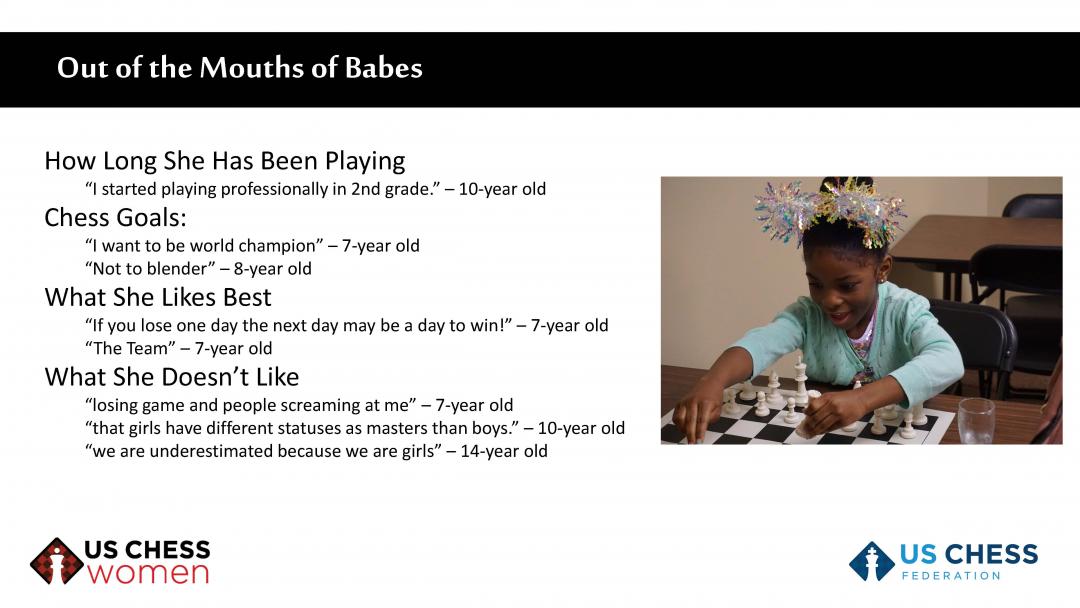 This annual conference has evolved from its roots in education to focus on broader topics this year. US Chess Executive Director Carol Meyer led a delegation that included Maureen Grimaud, Sophia Rohde, and Kimberly Doo with each of them making a presentation or chairing at least one session. After the event Rohde observed, "USChess is leading the way in the development of programming for female chess initiatives."

Meyer presented results from the US Chess Girls Club (these clubs have been a regular feature of US Chess national scholastic events in recent years) surveys during the opening plenary presentation and summarized key findings. Highlights included:

The remaining members of the delegation participated in sessions about US Chess activities for girls and women describing girls club activities, regional events, and the grants to US Chess affiliates for supporting girls and women’s programs that were made possible with support from the Saint Louis Chess Club. The presence of the US Chess delegation provided the attendees with some concrete ideas about many ways to increase engagement of girls. The European Chess Union (ECU) Women's Commission member Alice O'Gorman presented her findings from an ECU-wide survey of its federations. She noted that despite investments made in top women players across the ECU, there appeared to be limited or no impact on the number of women breaking into top 100 lists across ECU member states. She suggested that impacts could be improved with other priorities being funded. Perhaps, simply by being held, this conference has already had an impact. In a Tweet on December 1, attendee Tanya Jones wrote:

I went to support my wife (Maureen Grimaud) having little expectation that the conference would be engaging.  I was pleasantly surprised that this annual conference, much like the business conferences and conventions I attend, brings together the international chess community and creates valuable networking opportunities. In addition to the extensive discussion of women in chess, there were high-level presentations about chess and its impact on social and scientific themes.  GM Judit Polgar spoke to women’s chess and the dichotomy of being a professional woman while raising a family.  GM Jonathan Rowson, in speaking about his chess career, philosophized eloquently on themes from his new book, The Moves That Matter.  GM Matthew Sadler and WIM Natasha Regan spoke with enthusiasm about the AlphaZero project and their book on the AlphaZero/Stockfish match, Game Changer. Any one of these speakers would be worth seeing, but to get to learn from all three of them, coupled with the usual networking benefits of such a conference.. it was astounding.  Bravo to John Foley and his team for pulling this off.

See here for more about US Chess and Women: https://new.uschess.org/category/women/

"Girls don’t like it when they lose and have people ‘scream’ at them because they lost;" not sure if anyone likes this... but hey at least they are equal opportunity chess parents. if you scream at a boy you should scream at a girl with the same intensity otherwise you are reflecting lower expectations...
There is so much work being done to promote women & girls in chess in the U.S., and to have the London Chess Conference select this as its theme this year was perfect. This was the initial year of the chess grants from the St. Louis Chess Club & US Chess, there were several articles and videos about girls in chess, the Ladies Knight podcast by Jennifer Shahade debuted, the continued work by the award-winning Women's Committee, and all that capped by the conference is sure to help push the percent of females in U.S. Chess into the 20 percentiles! "Thanks & Congrats" to our power team of Carol, Sophia, Kimberly, and Maureen!
Two points: 1. The US Chess transgender policy was a step in the correct direction. However, members are only given two choices regarding gender when becoming members of US Chess, to wit, male or female. Thus, US Chess is effectively reflecting and reinforcing the status quo of the traditional gender binary found in main-stream United States culture. There is no provision for declaring oneself non-binary, Queer, gender fluid or other. Until member gender options at US Chess go beyond the antiquated gender binary, non-binary chess players will not feel welcomed or encouraged by US Chess. As an out late in life non-binary person who works with PRIDE and other non-binary groups in my community, I'm confident that my opinion represents the LGBTQ+ community's perspective on organizations and government agencies that fail to recognize the non-binary nature of human life on our planet. 2. One of the ways to support and encourage female and non-binary chess players on the local level is to support and develop local adult, over the board chess clubs. US Chess should declare and support gender and sexuality variant chess players by declaring that all affiliated chess clubs must be openly LGBTQ+ Welcoming Clubs. US Chess has done far to little generally to support adult clubs at the local level. That needs to change.