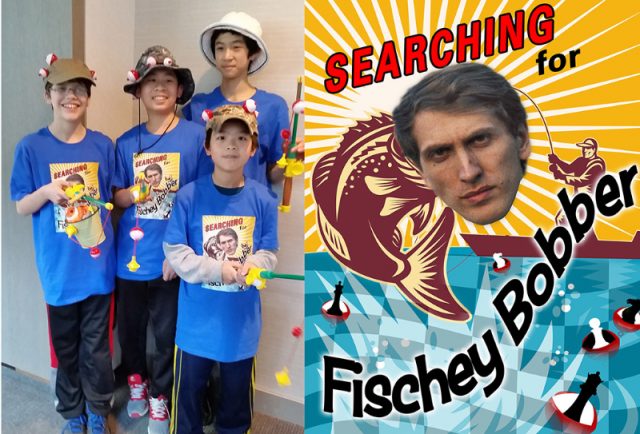 Searching for Fischey Bobber, Best Team Costume at the US Amateur Team North, Photo Betsy Dynako Zacate
The ever-growing Amateur Team North realized a 10 percent increase in entries over last year. The midwest event was represented by 10 different states this year, including Iowa, Ohio, Michigan, and as always there was a heavy showing by Wisconsin.
It has been a year since the untimely passing of Sevan Muradian (see obituary here at US Chess), but his standards of professional-style tournament direction lived on in many ways, including the supplying of boards and pieces. Bill Feldman co-organized this year with long-time host Glenn Panner.
NTD Glenn Panner said, “Chess Weekend would like to thank co-organizer Bill Feldman, and tournament directors Bob Messenger, Sam Shoykhet, and Donna Wallach. Our friends in New Jersey like to claim they have the largest team tournament, which they don’t, the honor belongs here in Illinois to our Illinois High School Association Team Tournament. We like to say we have the strongest team tournament, as evidenced by our North team winning it all last year, and the most fun!"

Costumes at the US Amateur Team North,  Photo Betsy Dynako Zacate
Panner failed to mention that the Amateur Team North could soon become long-term national team title holders, thanks to the growth of scholastic programs to support young players in the state of Illinois. The Warren Junior Scholar and Rising Star Program, programs sponsored by the Illinois Chess Association, have been providing free on-and-off-line training to qualified youth. The average age of one Amateur North Team, Grandmasters in Training, is seven years plus each player holds a national title. Each team member is also part of the Warren Junior Scholar and Rising Star Programs. 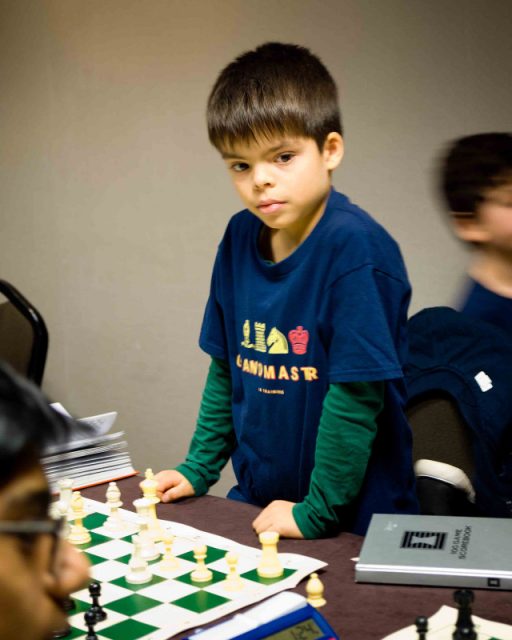 Dimitar Mardov of Grandmasters in Training,  Photo Betsy Dynako Zacate
It was also good year for costumes and team names. Custom shirts and hats seemed to rule. Among the highlights: team Half Past Dead, a 50+ team who wore shirts that read, Time Expired; The Mad Hatters, who sported hats that included a food item and an emoji; and handmade shirts for team We are 42. Yet, best costume went to Searching for Fischey Bobber who wore custom shirts, fishing hats, complete with their own fishing poles and pail of gummy worms. Best team name, by popular vote, went to Black Openings Matter.
In the Saturday night Blitz tournament, 45 competitors took part. George Li of team Whitney Young Forever won first place. 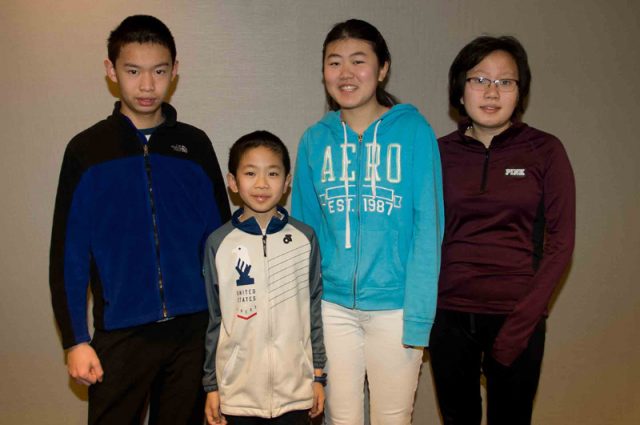 Team Gogica, top mixed doubles,  Photo Betsy Dynako Zacate
In the main event, going into round four of five, there were two perfect scores and nine teams with 2.5 points. All eleven of those teams still had a chance at first place. Wisconsin has been sending top teams to the North tournament for many years, thanks to the Wisconsin Chess Academy, but this year both of their main teams fell in the fourth round. GM Josh Friedel annotated one such game, in which his opponent held a draw to clinch match victory. 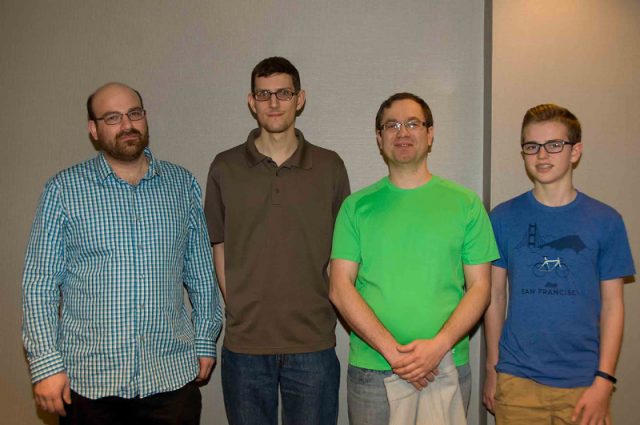 Wisconsin Chess Academy,  Photo Betsy Dynako Zacate
Those losses advanced Talladega Knights and How to Train Your Sicilian Dragon to the top five final slots, along with The Rim Protectors. Also knocked off by the end of the round was Gogica, who went on to win the prize for Top Mixed Doubles (a new category this year, with a strong and youthful team including National Champ Maggie Feng, Jason Wang, Ricky Wang, Marissa Li and Edward Zhang. 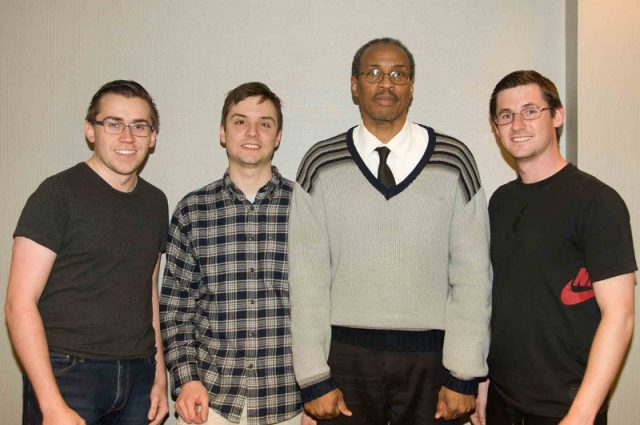 Rim Protectors,  Photo Betsy Dynako Zacate
Gogica lost to Fake Moves, who had the only perfect score going into the final round, where they played white against Nice to Mate You. 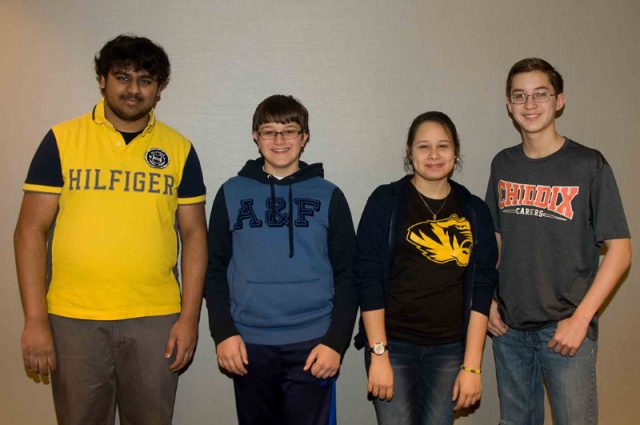 Talladega Knights,  Photo Betsy Dynako Zacate
The rival chess states faced off in the final round. How to Train Your Sicilian Dragon, led by IM Eric Rosen, a student at Webster, defeated Talladega Knights. But the battle on first board raged on. Fakes Moves’ first board Sam Schmakle found himself in a heated match with Ashwin Jayaram, when his Nice to Mate You teammate Anna Sharevich, Webster alum, fell to Jonathan Kogen. 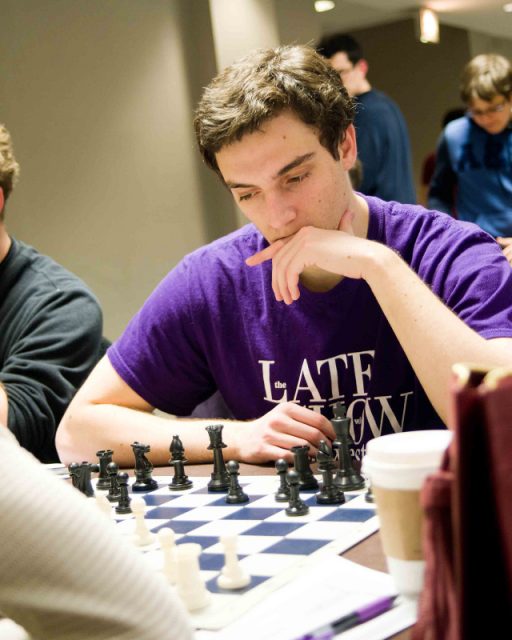 Jonathan Kogen,  Photo Betsy Dynako Zacate
The board one game came down to a queen ending. Schmakel pressed for the win to secure the team title, but Jayaram was able to win tying the match. Fake Moves ended up tied for first with How to Train Your Sicilian Dragon and Fake Moves took the title home on tie breaks. The championship team consisted of Schmakel, Kogen, Michael Auger and Steven Horvath.
The runners-up led by IM Rosen were rounded out by Tansel Turgut, Tom Polgar-Shutzman and Ben Shoykhet. 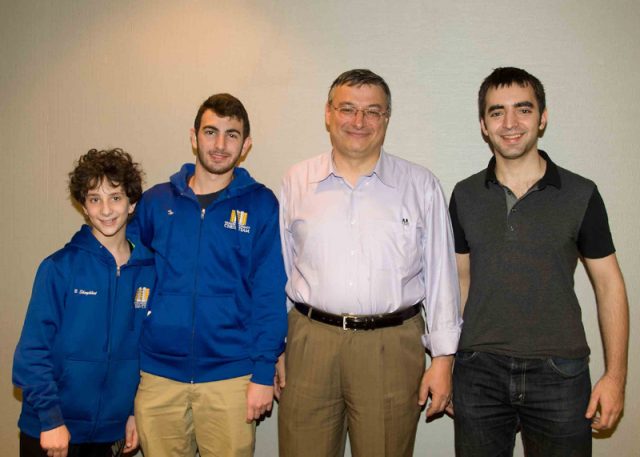