Underdogs Shine in Early Rounds at the Pan-Ams 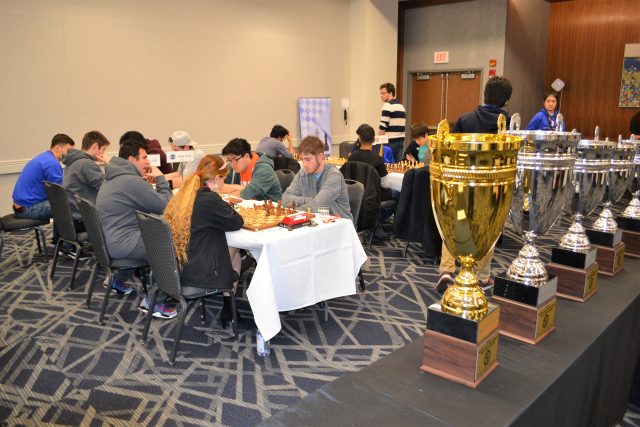 2017 Pan-American Tournament Hall in Columbus, Ohio, Photo Al Lawrence
Big ratings don’t guarantee smooth sailing. This week the Convention Center in downtown Columbus, Ohio, is an easy place to get a game of chess. But it’s a very tough place to score a win, with 15 GMs and 29 IMs on top boards among the 245 collegiate players prowling for points. Also among them are hungry class players, out for upsets. Eleven of the 58 teams at the annual Pan-American Intercollegiate Team Chess Championship sport an average U.S. Chess rating of over 2400. Defending champ Webster University, coached by GM Susan Polgar, boasts a top team with a 2724 average rating. Second seed St. Louis University (SLU), assembled and trained by GM Alejandro Ramirez, is close behind at 2702, even though its program is barely two years old. Ratings don’t guarantee results. Even round one yielded a major team upset, as UT-Dallas “D,” a scholarship squad with an average rating well over 2200, gave up a draw to Illinois “C”—a scrappy team made up of four class B players. And an individual upset with a swing of 600 points exploded on Table 6, Board 2, as A-player Andrew Sheehan scored the full point against GM Gil Popilski. In round three, Peter Gabrielides of Oberlin College chalked up a 933-point upset as Black against a 1749 player.  The PanAms offers a plaque for biggest individual upset and Peter leads the upset pack at the halfway point. Webster's "C" and "D" teams, also scored board one upsets. https://twitter.com/SusanPolgar/status/946497584151056384 Teams play four-on-four in a six-round Swiss tournament ending on Saturday, giving the student-players just enough time to travel home for New Year’s celebrations. The players on the very top teams are chiefly European GMs on full scholarships. But all players must meet strictly enforced rules certifying that they are degree-seeking students in good standing at their respective colleges. Titled players may have to meet even tougher standards. Other top contenders are University of Texas-Rio Grande Valley (UT-RGV) (formerly UT-Brownsville) coached by GM Bartek Macieja, Texas Tech University, coached by GM and former U.S. Champion Alex Onischuk, and UT-Dallas—a 10-time PanAms champ. All three teams average around 2600. All top five seeds except SLU entered multiple teams, giving themselves extra bullets in the shoot-out for a spot in the top four. At the finale of the PanAms, the top four U.S. universities qualify to send one team to the Final Four of College Chess, this year to be held over Easter weekend at the Marshall Club in New York City. Qualifying universities can send one team, made up of any students they choose. This year at the PanAms, there are very strong teams without the backing of a chess scholarship program. The University of Michigan comes in with a 2462 average rating, led on Board 1 by IM Atulya Shetty. Harvard is another 2400-plus crew, with GM Darwin Yang and IM Richard Wang on its first two boards. UC-Berkeley is near 2400, with IMs Yian Liou and Kessav Viswanadha on its top spots. The University of Toronto and Chicago U. are other colleges with impressive “pick-up” teams. 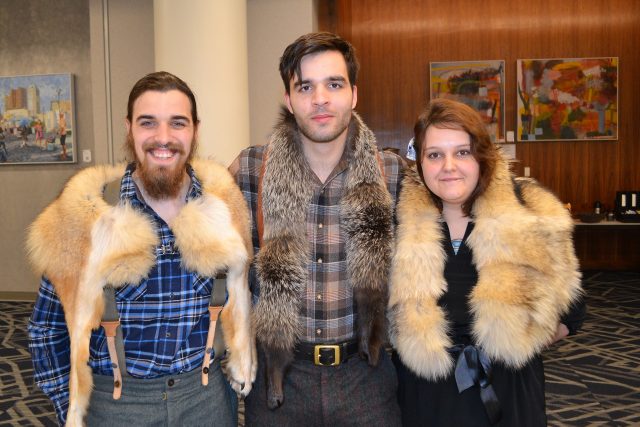 The three-person team from Alaska Pacific College seems ready for the frigid weather outside the Hyatt Regency Convention Center at the PanAms in Columbus, Ohio. Left to right: Jonathon Singler, Carson Kent, Emily Jean Smith.
But teams at the PanAms range from Webster A’s Olympiad-worthy rating to Alaska’s three-digit average. There are plenty of division and special prizes any team can shoot for. Bringing home any of the many trophies and plaques can be a boost to a college chess program. Five international teams are competing this year, certainly a recent record—three from Canada and two from Mexico. 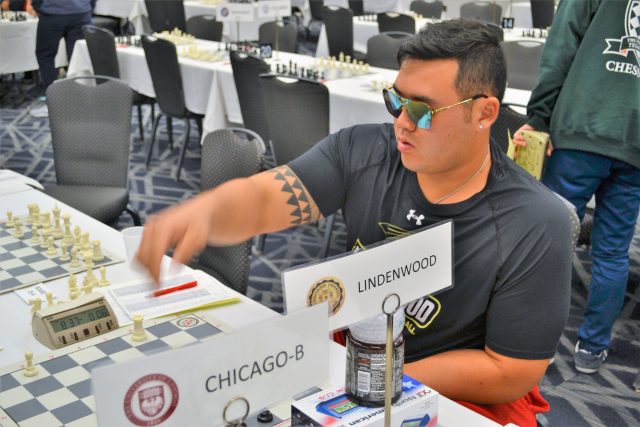 Lucas Beddow from Lindenwood, Photo Al Lawrence
One of the U.S. players farthest from home is Lucas Beddow, who came to Lindenwood University, in the western St. Louis suburb of Saint Charles, Missouri. Lindenwood offers partial scholarships for chess. Beddow, however, came on a full scholarship for football. “But it was very important that Lindenwood had a chess program," the veteran of two scholastic SuperNationals said. Another player far from home is Phiona Mutesi, whose early chess life was chronicled in the 2012 book and 2016 film “Queen of Katwe.” She has left Uganda to this fall attend Northwest University in Kirkland, Washington. “Friends in Uganda recommended Northwest,” she said. 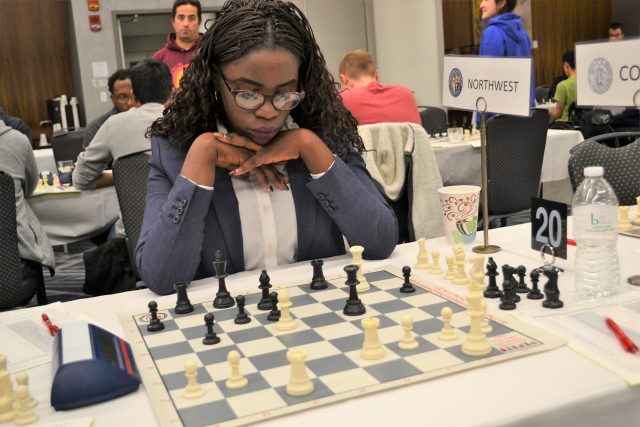 Phiona Mutesi, Photo Al Lawrence
This year’s event is one of the most spaciously and graciously hosted of all time, presented by Ohio State University and organized by Kelly Bloomfield, a veteran member of the US Chess College Chess Committee. Former U.S. Chess Executive Director and CFO Grant Perks heads the directing team, aided by Kathy Lin, Al Valentine, and Ben Tancinco. The national championship is held under the auspices of U.S. Chess, with support from the U.S. Chess Trust and Akuna Capital. The Pan-Am Intercollegiate Team Championship is open to any team of four players and up to two alternates from the same post-secondary school in North America, Central America, South America, or the Caribbean. Average ratings are calculated on the top four players. The tournament has been held every hear since 1946. Next year’s PanAms will be held December 27-30 in San Francisco. Follow the Pan-American Championships on the official site, which features live games of the top boards.  Find pairings and standings here.
SHARE:

In the early years, the event alternated between being a team event and an individual event.
Great article Al ...who is representing Tech in this tournament and how are we performing? thanks for the information...very well written...good luck Techsans...regards to Susan Polgar from Lubbock Texas....keep us posted
Speaking off of the 1900 defeating the 2500 player, that is really a great job done by the 1900 for defending the sacrifice and punishing an opponent 600 points higher rated’s mistakes. I personally did not like the strategy of the 2500. I always think when playing an opponent that much lower rated than you, you should enter a solid position (but still active)and wait for mostakes to be made/outplay them. The only real chance for a 1900 to BEAT (not draw) a 2500 is to enter a crazy position, which the 2500 went into thinking he could easilt defeat a class A player through tactics (that did not end up working)
So universities with extensive chess scholarships compete against teams with no chess scholarships at all? Really?
Robson still playing on the team after all these years?
[…] “Underdogs Shine in Early Rounds at the Pan-Ams” […]