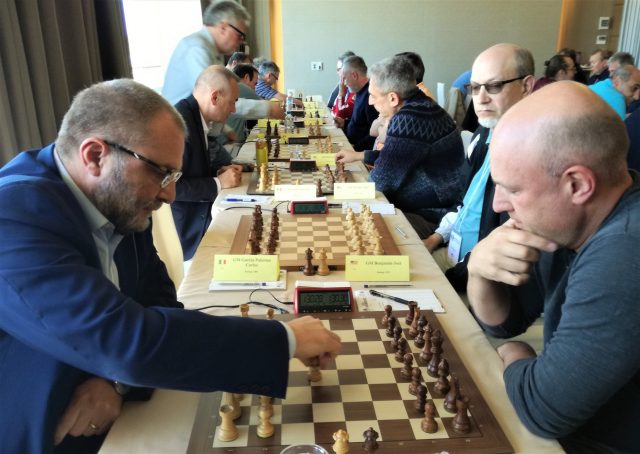 Shaba is once again carrying the team, and even more so than last year, it feels like the rest of us are along for the ride.  But by beating England this year instead of losing to them, we are playing from the lead. Last round (Round 4 – ed.) I accepted an early draw after looking to my right and seeing Shaba was going to win his fourth in a row.  Jaan and Yermo both nursed advantages through the time control, but given how crucial it was to get a match victory over Armenia, they both offered draws (game points are the first tiebreak). Today it is Italy, and I’m hoping to get my first win after three draws.  They are unfortunately resting Sergio Mariotti, as I was looking forward to seeing a grandmaster I remember from my childhood in action.

Benjamin’s hope became a reality, and his win over Garcia Palermo powered the Americans to a 2.5-1.5 match victory over Italy. CLO received updated comments from the match winner after the round.

We had a much more difficult match with Italy than expected.  Not so much in the score—we will take a win by any margin—but by how lucky we were to get it. Shaba wanted to rest but stayed the lineup to try to get me jump started with a white.  He had to settle for an early repetition against Godena, watching the match mostly in horror. We started off better on the White boards, but Igor [Novikov] was complexly lost for the second time in the tournament.  Somehow Igor held a draw and I was able to eke out a win. Jaan [Ehlvest] again made a team decision by offering a draw in a superior position with time very short for both players. I scored a win over Carlos Garcia Palermo 34 yrs after our first encounter.  I confess it took me a while to figure out the winning process in the rook endgame.  Readers may find the advance of the a-pawn to trade it for the h-pawn instructive.