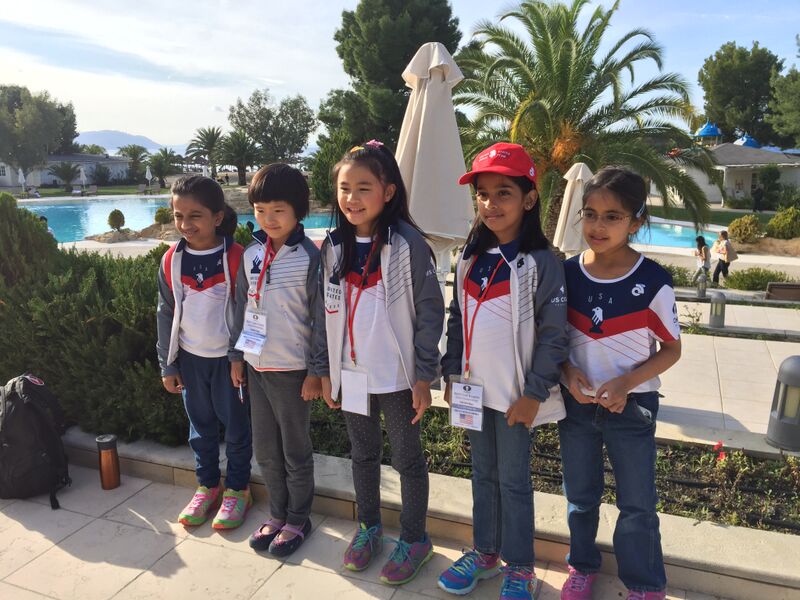 The 2015 Girls Under 8 World Youth team, sporting Sigma Two uniforms
(CROSSVILLE, TN) The United States Chess Federation is pleased to announce that thanks again to a generous sponsorship from Two Sigma Investments, this year’s players and coaches will be sporting custom designed uniforms when they travel to the World Youth Tournament in Russia in September and to the World Cadets in Georgia in October. This is the second year that the technology company based in New York has graciously donated in support of US Chess. Their donation makes possible the team uniforms as well as other items that enhance the team’s experience. The uniforms, custom designed by Two Sigma, receive rave reviews from parents, players and coaches. They join US Chess in expressing their appreciation to Two Sigma for creating a greater sense of team pride and a positive presence among other countries throughout the event. “We thank Two Sigma for sponsoring the uniforms,” said parents Arun and Srividya Narayanan whose players attended the 2015 World Youth in Greece. “Our children love the material and design of the uniforms . . . and like the uniforms so much that they wore the jacket on the flights to Rome and Athens. They have been wearing it to school.” “The sponsored uniforms we received from Two Sigma not only gave us a professional look,” offered Ritika Pandey, “but also the confidence that every serious chess player needs. Wearing the uniform makes me proud to represent the United States chess team in this huge international event, and it really boosted my confidence during rounds.” "The team uniform serves as a symbol of team spirit, and patriotism for all in the delegation,” added US Chess Head of Delegation, Aviv Friedman. “Like in any other sport, it identifies, and recognizes those who wear it, as member of this cohesive proud group, that is Team USA!" Founded in 2001, Two Sigma is a technology company dedicated to finding value in the world’s data. Two Sigma has built an innovative platform that combines extraordinary computing power, vast amounts of information, and advanced data science to produce breakthroughs in investment management, insurance and related fields. Today, Two Sigma manages approximately $37 billion in assets, employs more than 1000 people and has offices in New York, Hong Kong, Houston and London. Two Sigma was a joint sponsor of the 2014 Final Four of College Chess tournament.
SHARE: