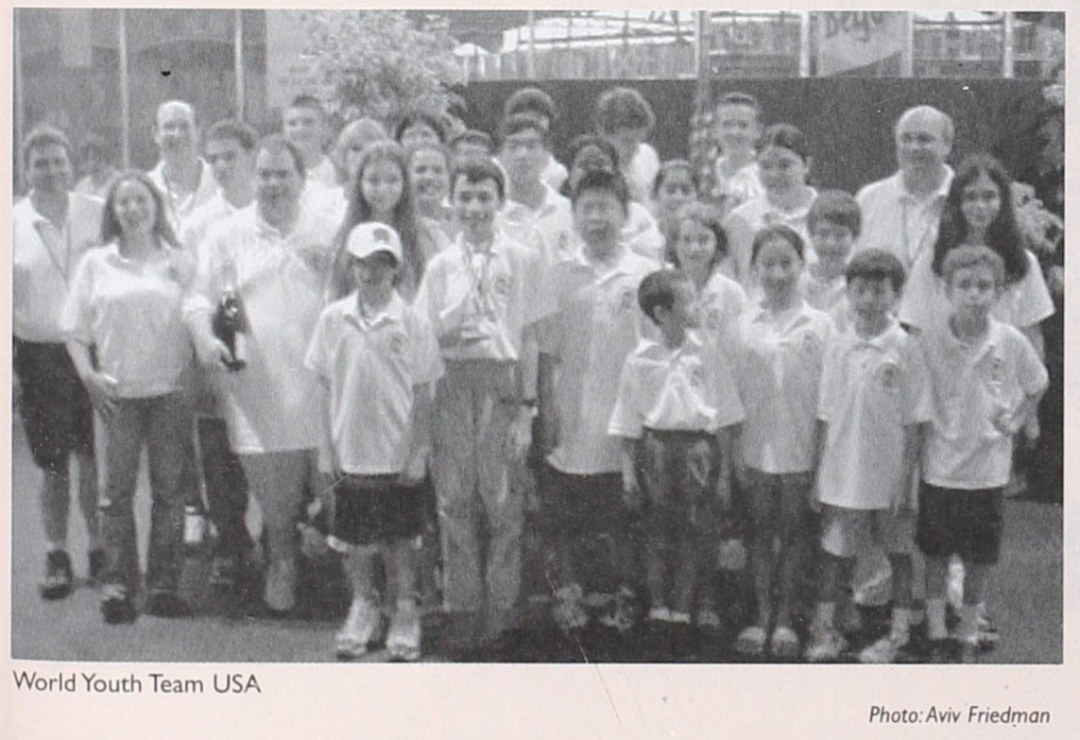 Many happy returns continue from the 2005 World Youth Championships, when the U.S. delegation sent 31 players to Belfort, France and produced several noteworthy performances for a sixth-place team finish out of 81 federations.

Nearly every U.S. player managed at least an even score in the 11-round event, including at least three players who went on to become Grandmasters and US Chess superstars, and are now currently competing for a spot in next year’s US Chess Championship -- GMs Alex Lenderman, Robert Hess and Daniel Naroditsky.

None were shining brighter than 15-year-old Lenderman, who stormed the Boys U16 section in Belfort and became the first American World Youth Champion in over a decade. The New Yorker turned in a scorching performance scoring 9/11, an even-more impressive tally considering a slow 2.5/4 start -- and a 6.5/7 closing streak to earn the gold medal. 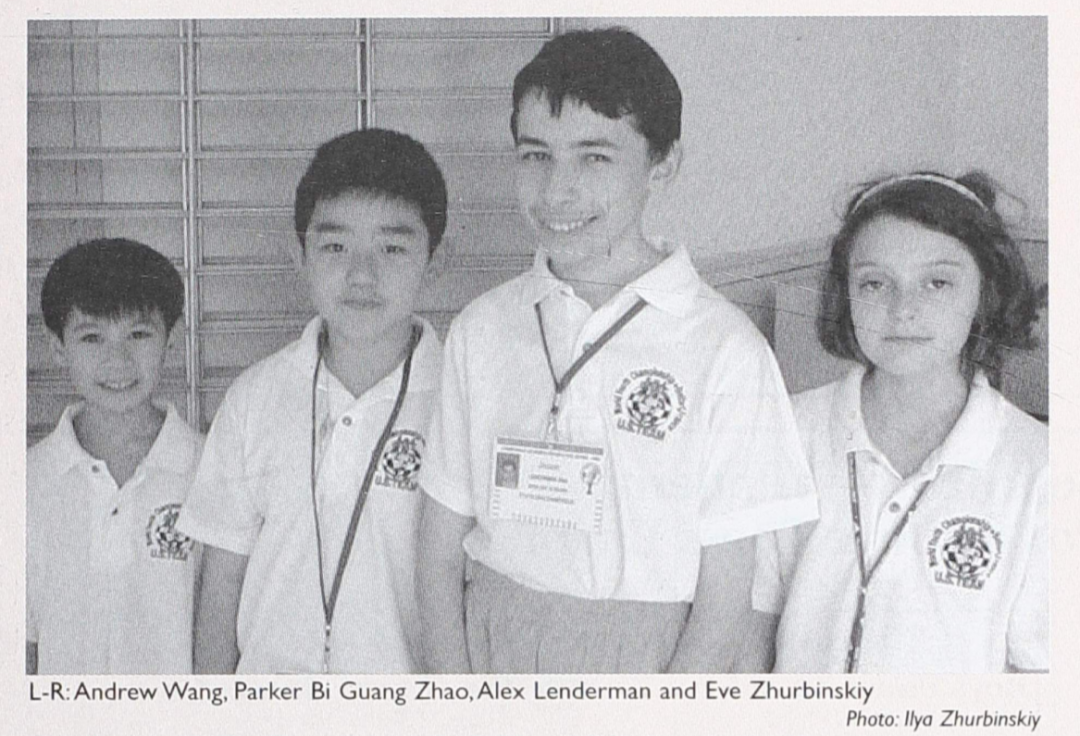 Only a FIDE Master at the time, Lenderman picked the right event to be punching way above his belt, including this victory in the penultimate round over then-IM Ian Nepomniachtchi from Russia, who eventually earned the silver medal in 2015 and went on to be today’s No. 4 player in the world.

The October 2005 issue of Chess Life, or specifically the backpage section “School Mates,” which would later become Chess Life for Kids, features a U.S. roster studded with lasting star power, and a great interview of the world champion Lenderman by U.S. delegate coach FM Aviv Friedman. Some juicy reveals by Lenderman includes his not having a regular coach (“It costs a fortune.”) and one of his tournament secrets being long walks to the tournament venue with his grandfather.

Lenderman also describes his chess work ethic coming from playing many OTB tournaments but, in 2005, he had also started to find benefits from a lot of “on-line blitz” chess.

“Playing online allows you to try out lines and pick up ideas for openings you could later apply in tournament chess, so it helps,” said Lenderman in 2005. Today, the GM sits a half-point off the lead in the first-ever online qualifier for the US Chess Championship.

Lenderman also nails prophecy with a bit of game recognizing game, when Friedman presses the 15-year-old on who to watch from the younger generation: Lenderman picks Ray Robson, who scored 8/11  to finish fifth in the Boys U12 section and is now firmly in the top-100 players in the world; and also picks Daniel Naroditsky, who scored 7/11 in the U10 section for fifth place. Lenderman and Naroditsky are currently tied in the US Championship Online Qualifier, and fought to a draw on Wednesday.

Also appearing in both the 2005 World Youth delegation and the online qualifier to next year's national championship is GM Hess. Now a popular high-profile commentator on chess.com, Hess scored 8/11 in Belgrade and finished fifth place in the boys U14 section.

All three GMs Lenderman, Naroditsky and Hess have since competed in a US Chess national championship event, with Lenderman joining a three-player playoff to decide the champion in 2014. 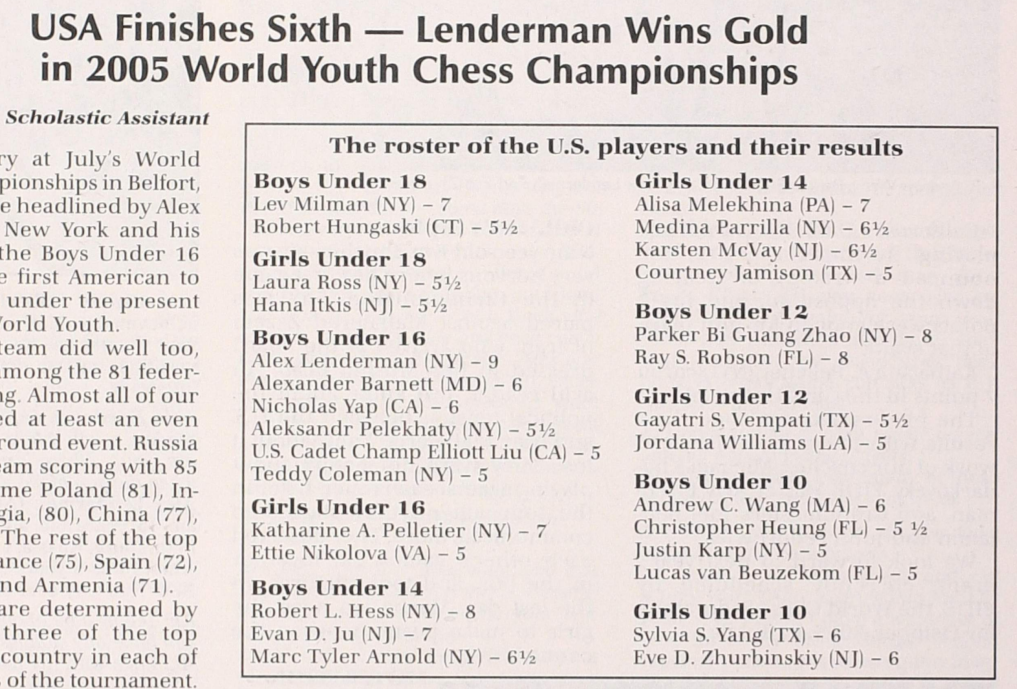